RPF PREMIUM MEMBER
Another kit finished a while ago but not posted. This is the RetroKit 1/72 scale APC and assorted marines. I had the APC produced by Gonziod in the early 90s, but this version is far more accurate and much sharper detail. However in a moment of madness I decided to add full lighting to the headlights, front side lights, rear light, search light and an intermittent barrel flash for the main guns.

Some significant areas of the underside had to be milled out to create space from the electronics, battery, LEDs and associated wiring. I also recreated the guns and searchlight housing in CAD and printed new versions to facilitate the lighting - printing the guns with a hole along them was easier than trying to drill out the existing parts, and similarly the searchlight was printed hollow to permit fitting a 0603 size SMD LED. Also new rear light units were printed in clear resin, but with a small recess in the bottom to hold a tiny 0402 LED in each one

While I was at it I also printed some other parts with improved accuracy including the front mini cannon, the rear gun rails, the cylindrical canisters on the rear of the hull and the searchlight grille.

0603 LEDs were used for the headlights, with a small piece of 1.5mm fibre optic with the end slightly mushroomed by a flame used to create the lens of the headlight.

The marines were a little rough in places, and I didn't spend as long on them as I probably should - camo at that size is tough!

Once I was all finished I realised the the rear lights on the real APC were actually white, not red! Doh! Oh well, too late to do anything about it now - the red LEDS are sealed inside the model. Such is life. 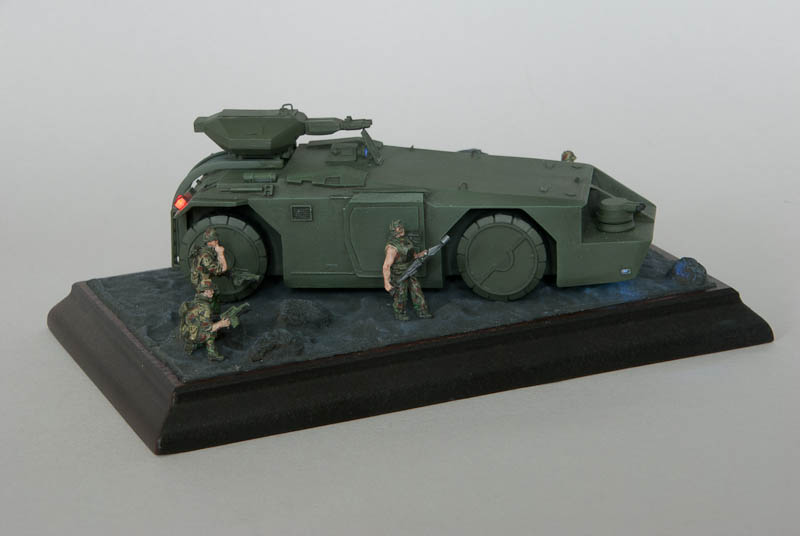 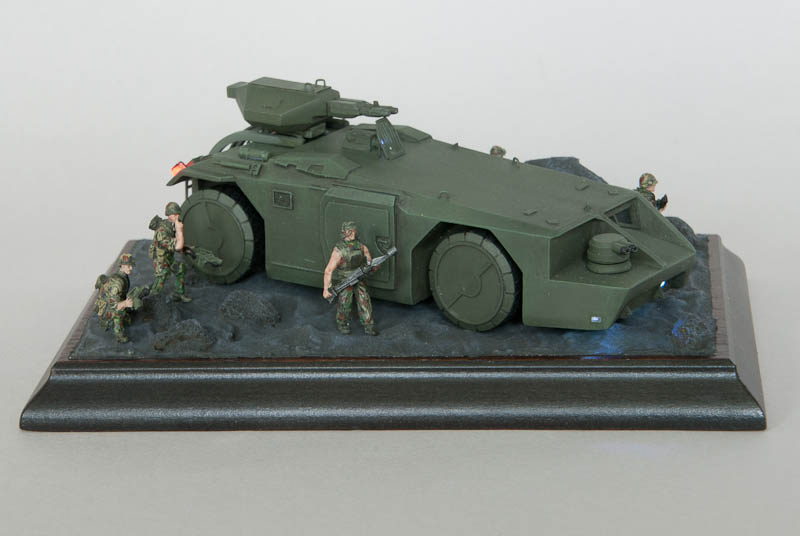 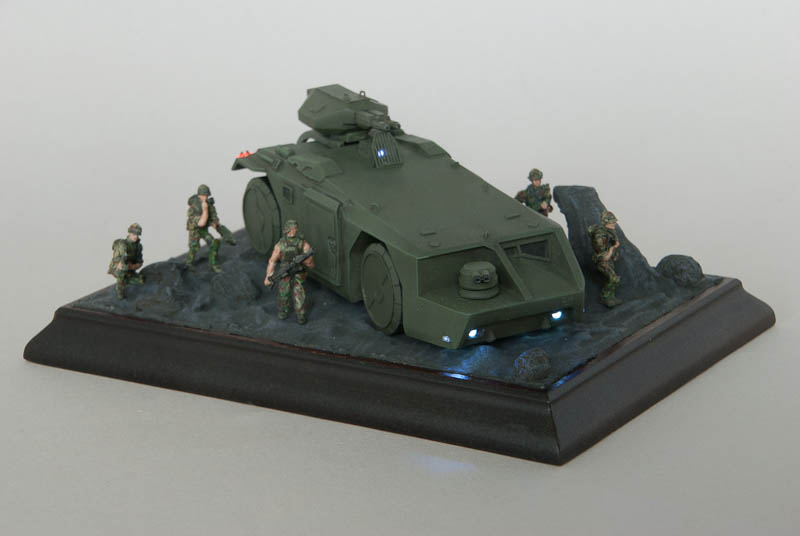 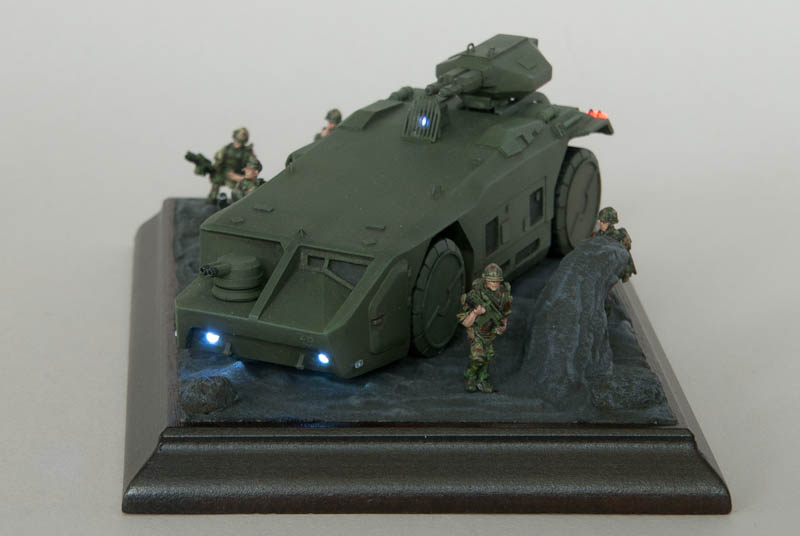 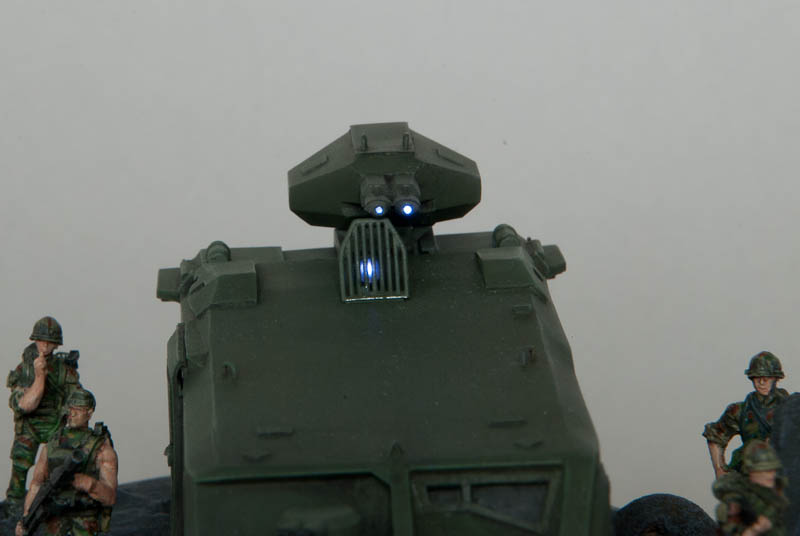 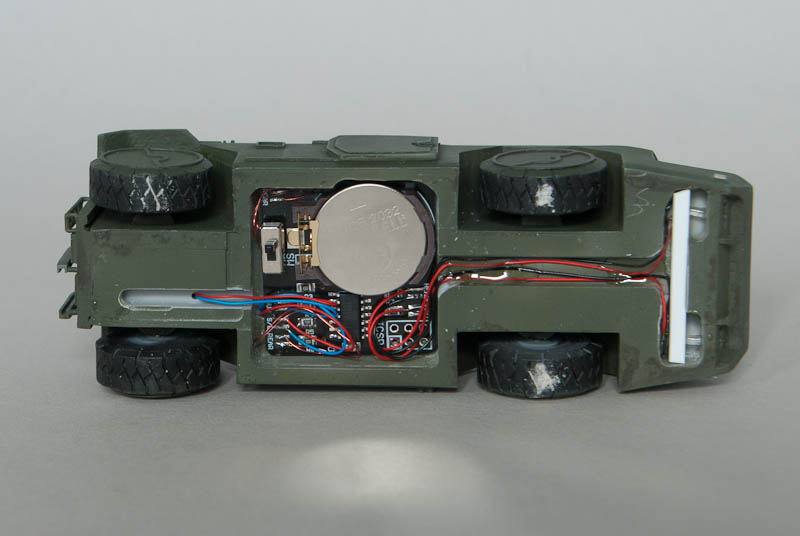 Nice dio and the lights are A1

My favorite franchise. Love your dio and all the work that went into it.
H

Very cool. Any chance your upgrades are available for purchase?

Very cool. Do the wheels roll?

The kit is very nice looking, and the casting nice and bubble free, but the molding is going to be a nightmare to clean up.

I don't know if yours was the same, but I have almost a full 1/4" or more of resin that has to be sanded off the bottom of the APC body. It's like it was cast with an open face mold.

I want to light mine up as well, but being a solid chunk of resin I am not looking forward to it

The rail system for the gun was a total head scratcher. It is two straight resin pieces that you have to bend yourself after heating them to soften it

RPF PREMIUM MEMBER
Yeah the APC is a lovely little kit, but the removal of the pour spouts is a major PITA. I have a Proxxon mini mill so I made a jig to hold the body securely upside down and slowly milled off the excess a mm at a time, This also allowed me to hollow out the recess for the electronic & battery, and to cut some channels for the wiring. I also machined off the excess from the wheels in my lathe. Without those tools, it would have been hours of sanding.
I struggled with trying to bend the rail mounts supplied in the kit in the right place before giving up and printing some the correct shape. Or almost correct - they were still a bit off!
The wheels don't roll, but could be made to easily. I just didn't want the kit rolling off the base!
I hadn't though of making the upgrades available as it's a pretty niche build.... maybe there is demand?

RPF PREMIUM MEMBER
Just dug out some pics of milling the base - can't believe it was actually nearly 5 years ago I actually started this! it got stuck in limbo for a long time. 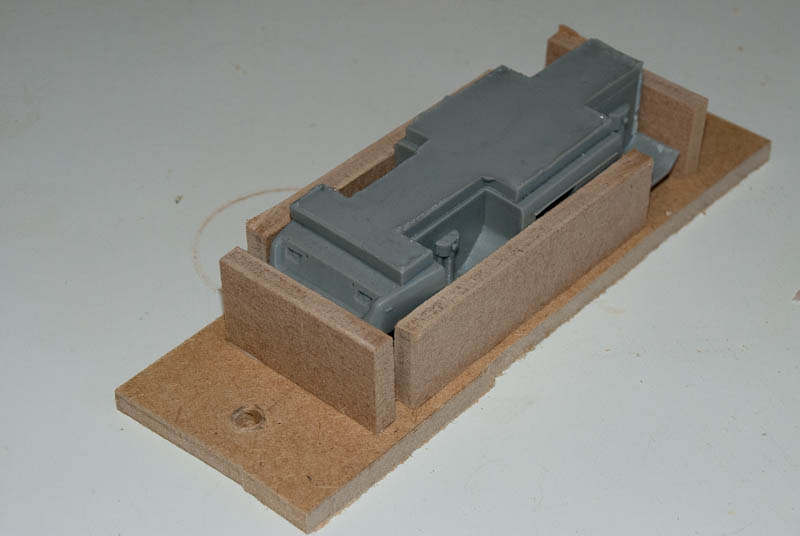 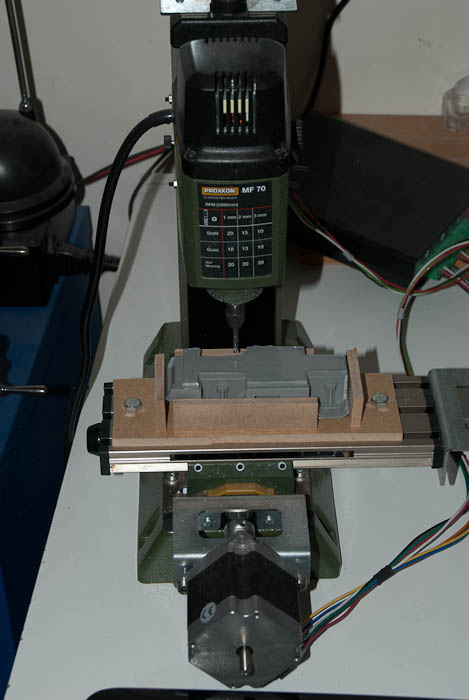 Yep, that surely is the same massive amount of resin that needs to be removed from the underside.

I had though about breaking out the belt sander to speed it up but have been afraid of going to far by accident if I don't hold it right. Maybe making some kind of jig around it might help. A milling machine sure would make things easier though

Aliens: Another Glorious Day in the Corps