A little while ago I started working on a project with a collector right now who is a huge fan of the Alien movies, and wants reproductions of some of the more niche tools and props. We're starting off with what I'm calling the 'claw cutter' for lack of a better name - the tool Ash uses to initially try to cut the alien off its victim before it spurts acidic blood.


I combed through the movie as closely as I could to try and get reference images of it to work from and put some notes together. 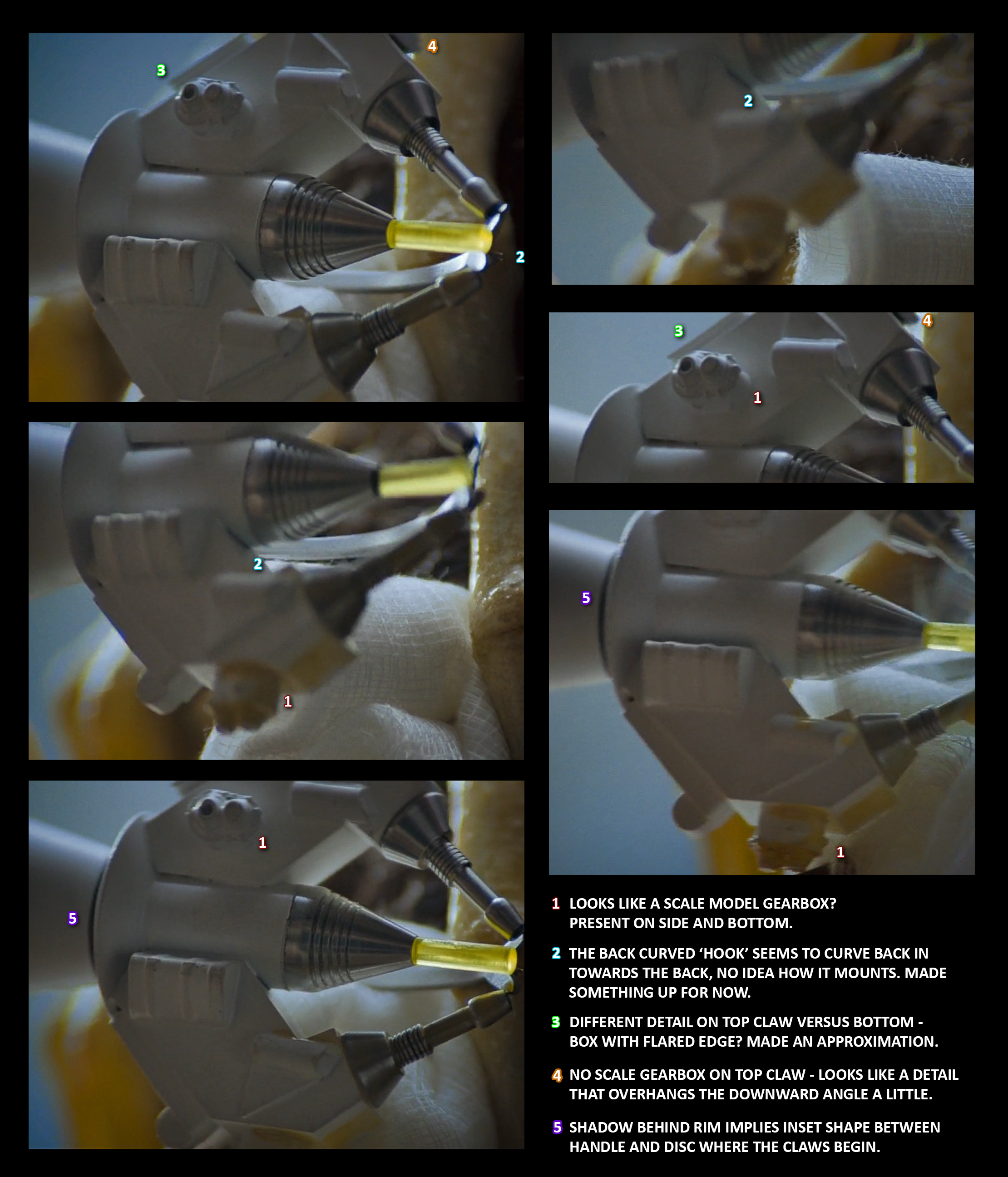 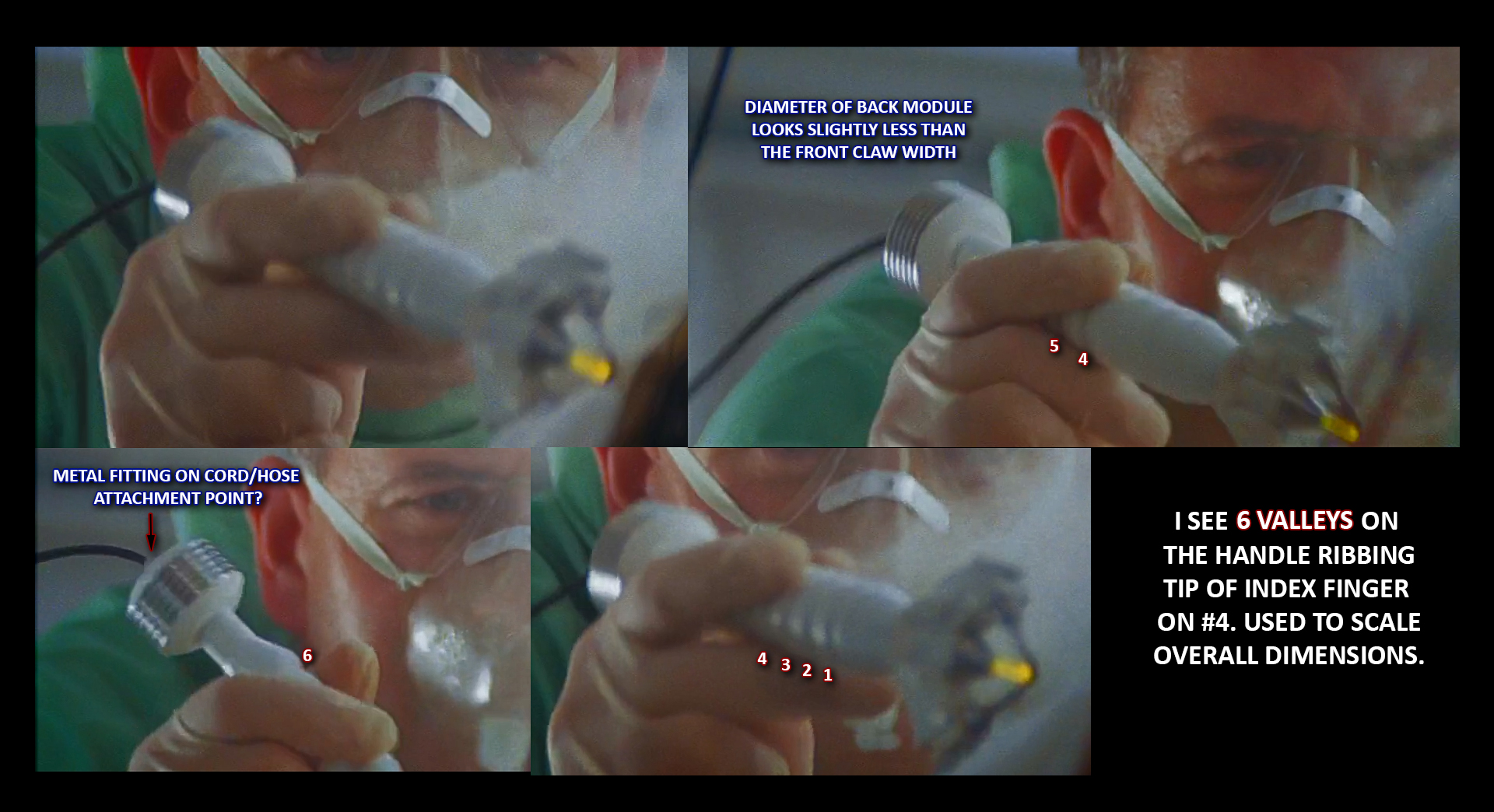 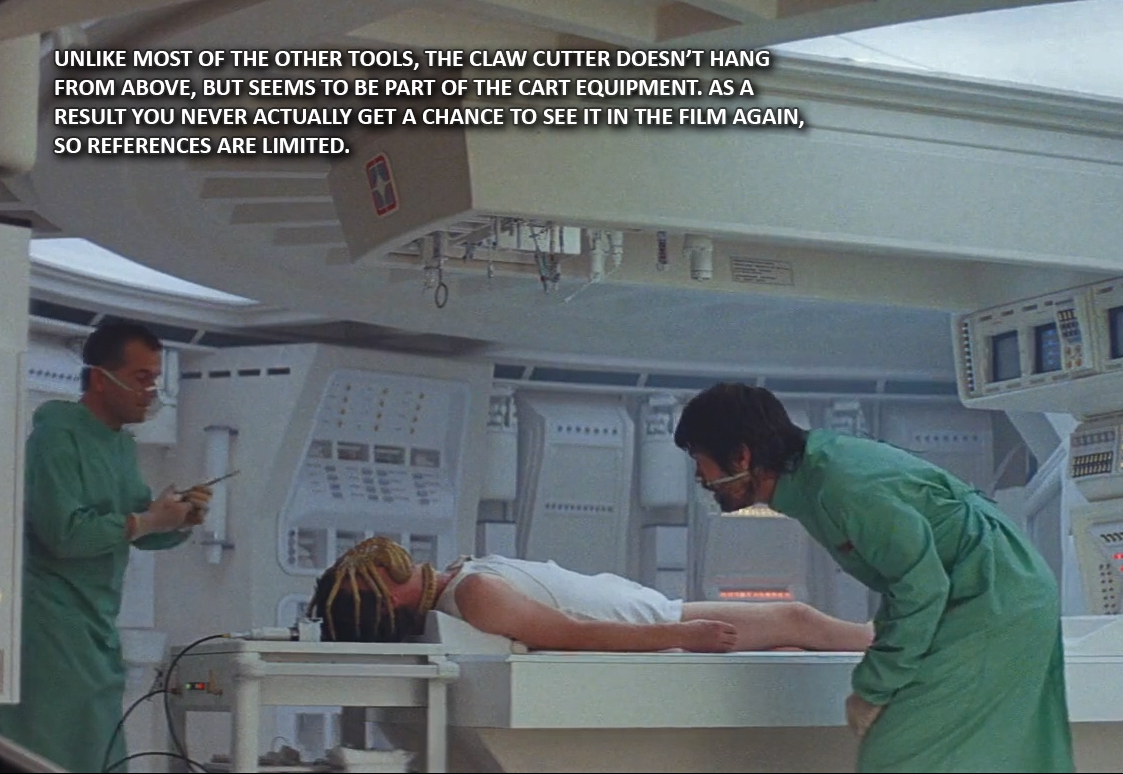 I should point out that there are a few things that even these notes get wrong. Based on this image... 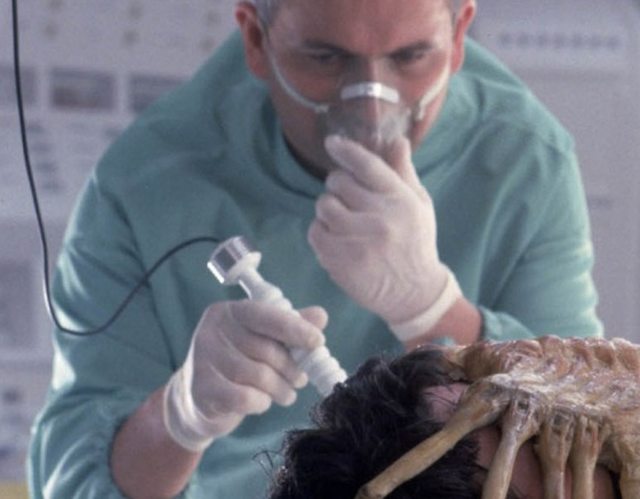 There's more ribbing on the handle than I initially counted, so there's that.

When I was working up the initial drafts of the model, I tried using a rough 3D scan of my own hand in the environment for scale. 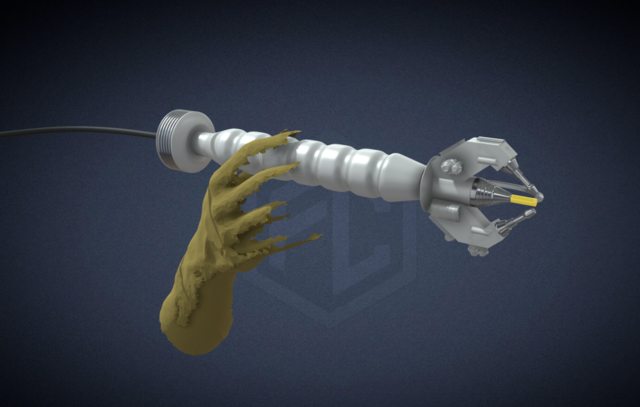 Seemed like a smart idea initially, but I ended up with a scale that was obviously too big when I went ahead and did a very quick draft print of the parts in vase mode: 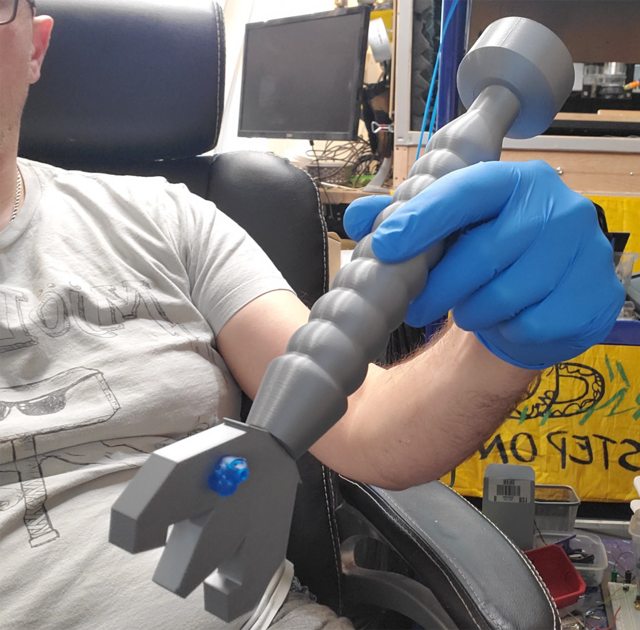 At that point is was about 13" end-to-end, which was no good. I've been tweaking it through a number of iterations and after a bit of trial and error ended up with something that feels right at about 10.43" end-to-end, instead. 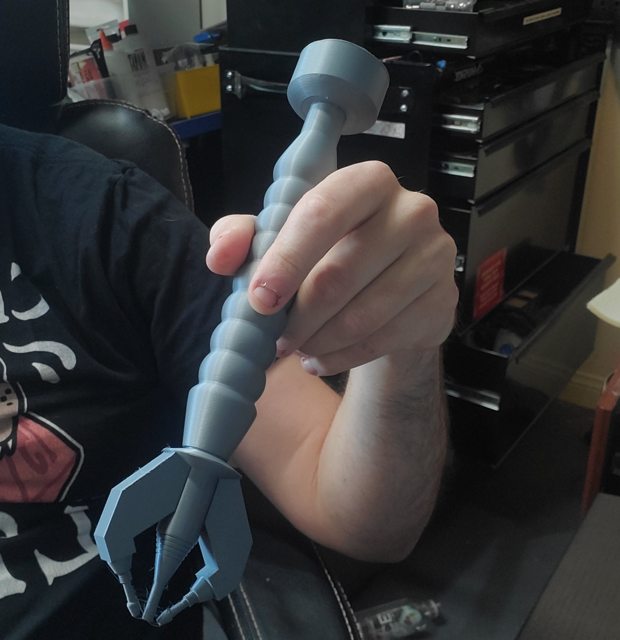 After getting in the right ballpark for scale, I started using my 3D modeling software's camera alignment tools to see if I could directly match an overlay of the model geometry with the pictures I was using. It has taken a bit back-and-forth, and at this point I'm on iteration 5 of the design, but I think I've got something pretty close to correct now.

I can't get an exact match of the camera angles because I don't think I can model the physical camera settings used to film the movie exactly.

There are a few details I made up as I went along. As far as I know, you don't ever really get a good look at the opposite side of the tool. For instance, there's a Y-shaped fork that extends from the tip of the yellow tube around the back of the tool in an arc and seems to terminate somewhere by the claw-head, so I put a little boxy greeble where it might intersect with the rest of the tool. I also took a guess and assumed that the details from one side of the tool (the gearbox and the gas-can-looking-thing) would be present on the reverse side. 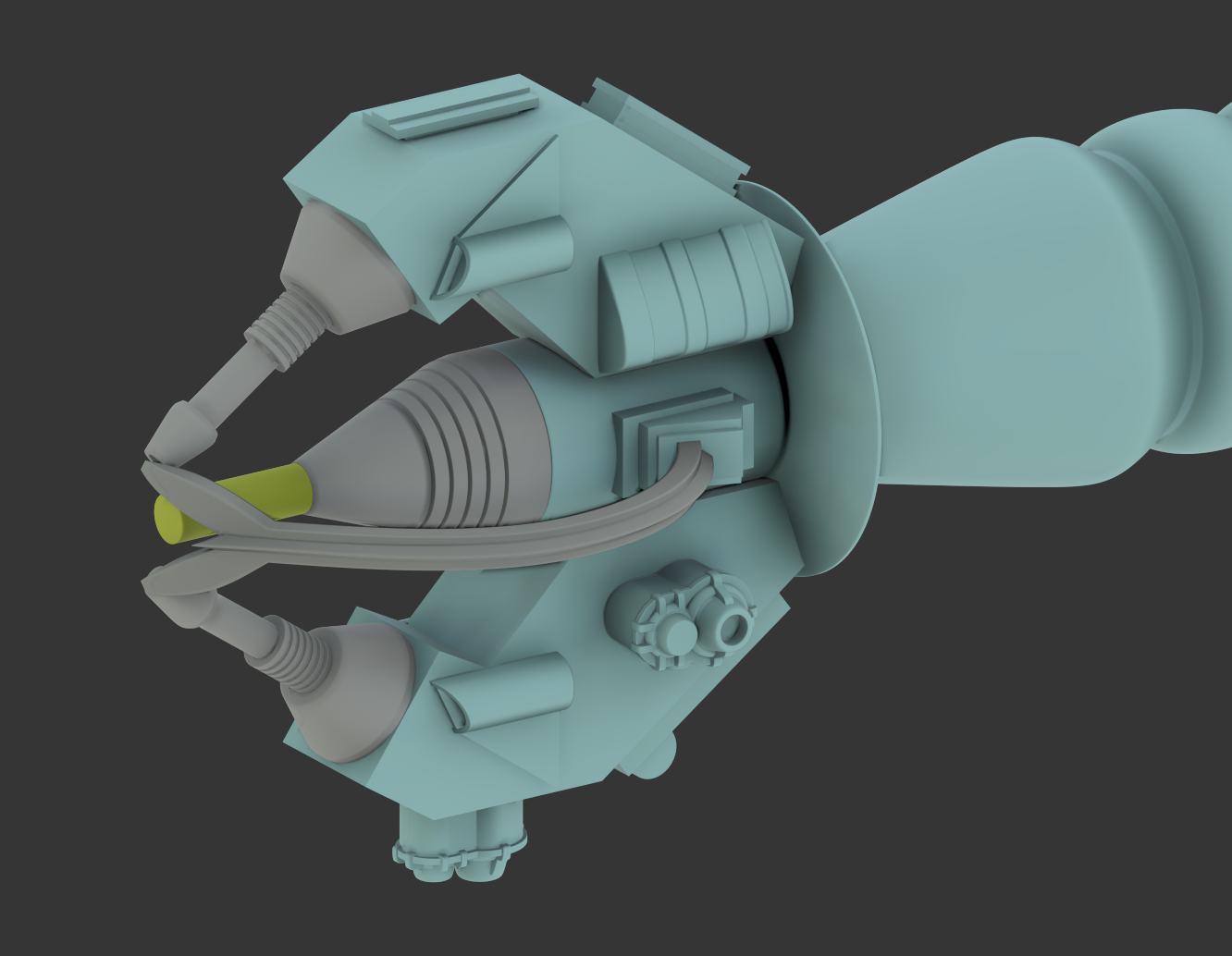 It also has a UK plug on the model at the moment - the collector I'm working with has some other actual screen-used stuff, and indicated that's what most of the other props seem to be terminated with.

I've uploaded it to Sketchfab so folks can spin it around and look it over to assess.

At this point, I'm posting this both to share the work and because there's a chance, however slight, that someone here has better or different reference images than what I have been working with that might indicate some changes to the design. I am actually dreading that a little bit, as I can imagine finding out a bunch of things that need further changes... ... but in the name of screen accuracy, I'll cross my fingers and see what you guys think so far!

'Alien"? "niche tools and props"?
Your first post is already exciting. I love your detailed analysis and documentation.
I'm following!!

Well, I mostly meant 'less represented props' as compared to all the rifles and other things I've seen a ton of.

Ein said:
Well, I mostly meant 'less represented props' as compared to all the rifles and other things I've seen a ton of.
Click to expand...

I hope you didn't get me wrong: The "niche" things are what I love!

Poke around the forum a bit, there was a research thread on this a while back.

division 6 said:
Poke around the forum a bit, there was a research thread on this a while back.
Click to expand...

Definitely. I dug around quite a lot here to try and see if anyone else had tracked parts or images down of this thing, and the closest I got was a thread about this other tool, which I also plan to make. Unfortunately, I haven't had any luck finding anything else about the claw cutter in particular, so if you have any further leads I can follow I'd appreciate it.

Hmmmm.
It may have been lost in the server migration.

Yep, careful with the hand size. Holm's height was 5'4" and had small hands. I reproduced those ions ago (don't have the pics anymore) I used a few cake making tips (you can find those in metal in stores). Here's the rear of the prop you're trying to build. Simple attachment it seems. 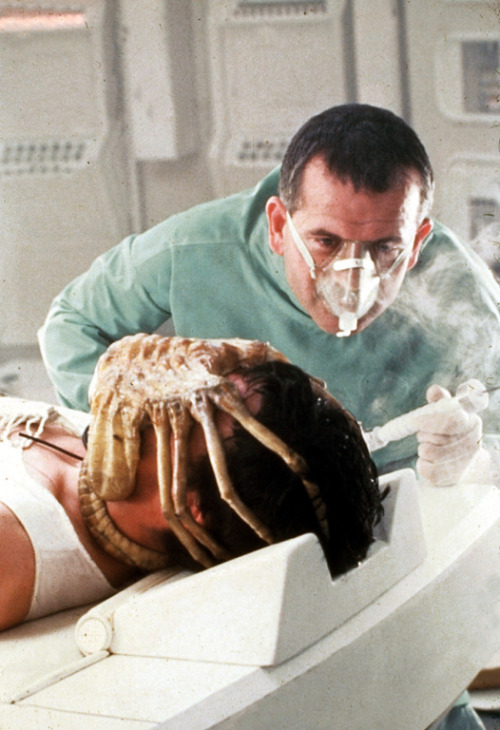 joberg said:
Yep, careful with the hand size. Holm's height was 5'4" and had small hands. I reproduced those ions ago (don't have the pics anymore) I used a few cake making tips (you can find those in metal in stores). Here's the rear of the prop you're trying to build. Simple attachment it seems.
View attachment 1463588
Click to expand...

Thanks for that! I'm sorry to hear you don't have pictures of yours, I would have loved to see it.

Did you happen to find cake decorating tips with the right kind of banding at the nozzle when you were making yours? I've gone through tons of searches online seeing if I can find a similar match to work backwards from for scale, but they're all smooth-sided and it looks like that metal material's too thin to really cut grooves into.

Well, I found my pics (on Propsummit) some discussions were mentioning airbrush tips also... 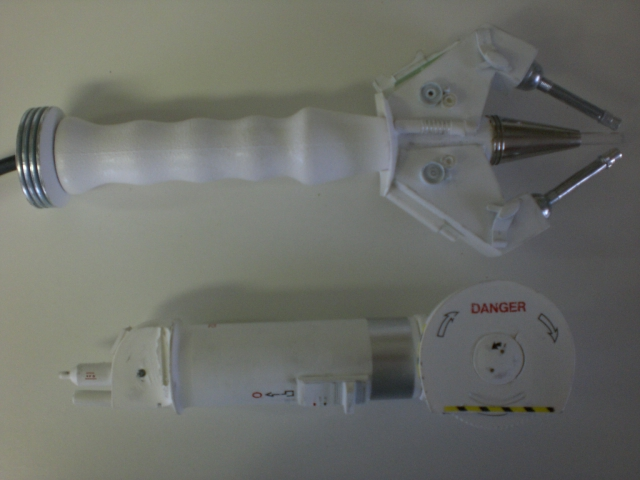 Btw, the funky handle was from a skeegy from Canadian Tire (Canada)

Btw, the funky handle was from a skeegy from Canadian Tire (Canada)
Click to expand...

What on earth is a skeegy?

It reminds me of the old drll handles that were used on the Liberator blasters in Blakes 7. 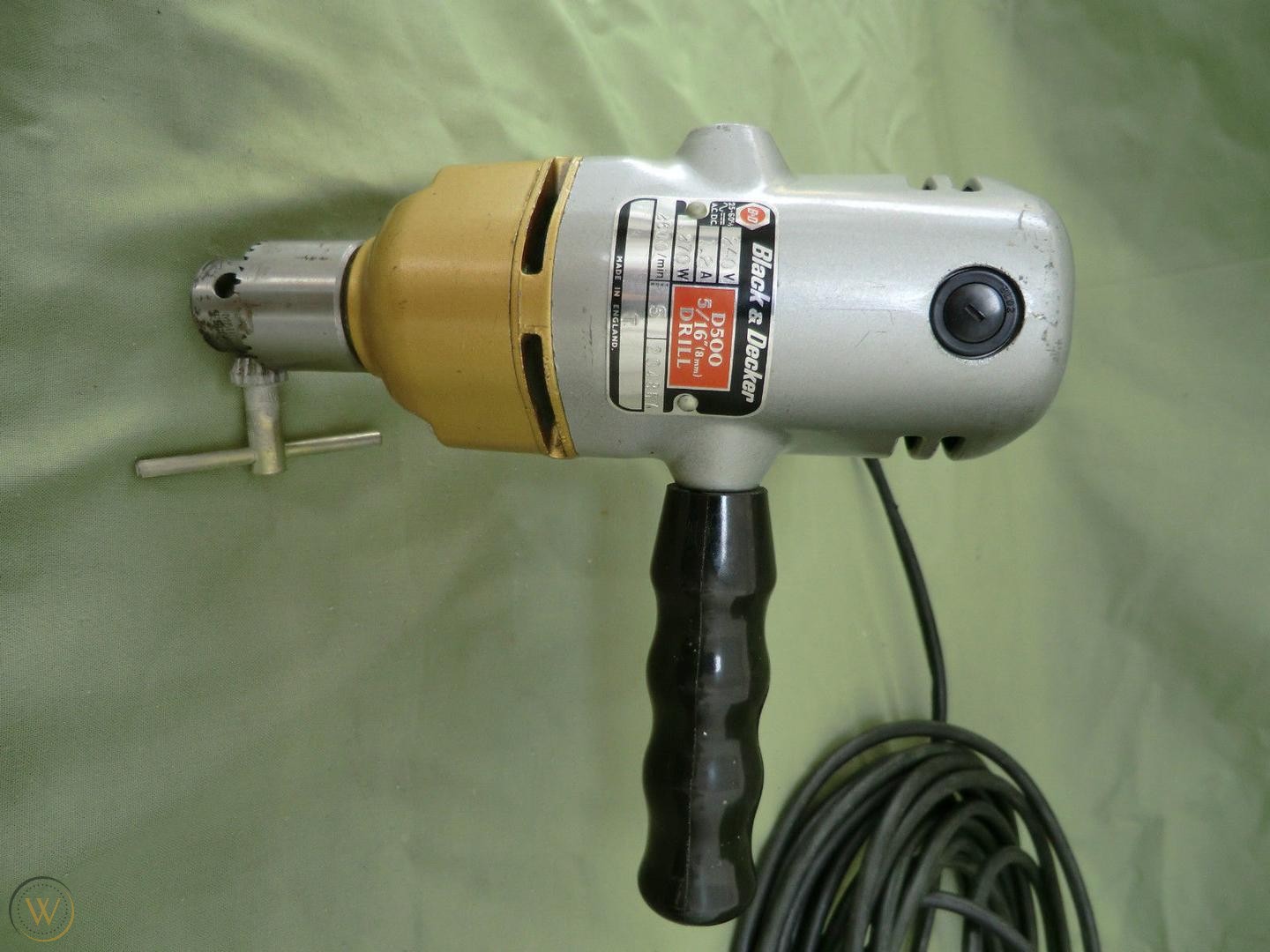 It shows how diverse we are as Canadians. We can't even understand each other.

Urbandictionary.com says that a skeegy is "a scummy girl who sleeps with everyone's boyfriends".

What aisle would she be in? I can't seem to find her on canadiantire.ca.

RPF PREMIUM MEMBER
The triangular box on the laser tool is a fuel container from the 1:35 scale Tamiya 232 armoured car.

It shows how diverse we are as Canadians. We can't even understand each other.

Urbandictionary.com says that a skeegy is "a scummy girl who sleeps with everyone's boyfriends".

What aisle would she be in? I can't seem to find her on canadiantire.ca.

Yep, squeegee should`ve been the right spelling and yes it`s used to clean windows and the scum off of a shower (not off the scummy girl)

Pro Mod said:
The triangular box on the laser tool is a fuel container from the 1:35 scale Tamiya 232 armoured car.
Click to expand...

That makes a lot of sense, and now that you've pointed it out I think I can make out the buckles on the actual screen-used prop. I'll have to add that.

I don't suppose you've got any idea about the size of that piece, do you?

I was actually looking for other reference images from Alien and I ended up finding a few shots I hadn't had before to work from. I did my best to enhance what details I could in Photoshop.

This one's actually the same as what joberg linked above, it was just higher resolution.

Still never get a good look at the other side of that claw, but with a bit of zoom and enhance...

This suggested a few things to me:
I also updated the gas tank model a little bit on the side of the tool thanks to the image Pro Mod shared. I re-did the positioning of the straps on it and added the missing buckles. I'm happy to say that although I was operating on my best guesses and hunches, my already-modeled part lined up really closely with the gas tank details, so I think I am on the right track. Adding the missing buckles was the biggest thing.

Here's an updated link for the interactive model showing where it's at: 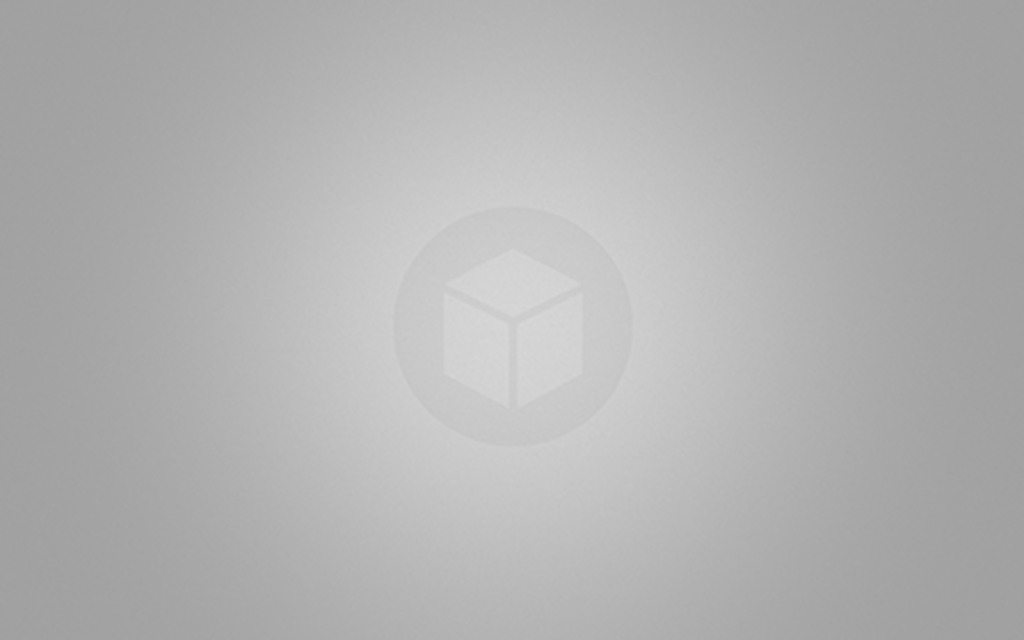 After seeing one of the details identified I had to get the model. I received my Tamiya 232 armored car today and all 3 details came from the same kit.