Ever have a really obscure found prop obsession? One so obscure that you find it impossible to uncover any information on the prop?

Over the past several months, I've been attempting to locate as many of the "toys" that appear inside the Nostromo. This has led to a small collection of (nearly) screen-accurate Hoptimists, and one lonesome dipping bird that still requires a mate. But there was one toy that caught my eye, even when I was child, that I knew I had to locate. And that was the strange character with the long snout that appears dangling from the corner of Kane's monitor during the Nostromo boot-up scene. After completing my little Hoptimist family, my next mission was to find this character.

Unfortunately, try as I might, I was unable to find any information on this guy. Sure, there was plenty of information on Hoptimists and dipping birds, and for that I'm thankful for everybody who has made that information public! Your hard work is appreciated! But this little fellow? Nothing. So after ingesting a liberal amount of caffeine, I decided to devote as many hours as I could to scouring the internet until I found him. This was a more intensive task than expected, because, try as I might, no matter how many variations of keywords I used, I could not find any vintage elephant toy that closely matched what appeared on screen. After clocking six or seven hours into this venture, the thought occurred to me that maybe the Elephant Man had been cobbled together by the prop department from various other toys, or scratch-built entirely. It was concealed in shadows, after all. In my state of exhaustion, the idea seemed plausible.

Just as I was on the cusp of giving up hope, an image caught my eye: it was of a small Dutch rubber keychain made in the 60s, and designed in the likeness of an elephant man wearing a suit. His hands were stuffed in his pockets, and a small tail protruded from behind him. The head, torso, pants and tail were segmented, separate parts fastened together, instead of being one solid piece. He appeared to be from a series of similar anthropomorphic character keychains. 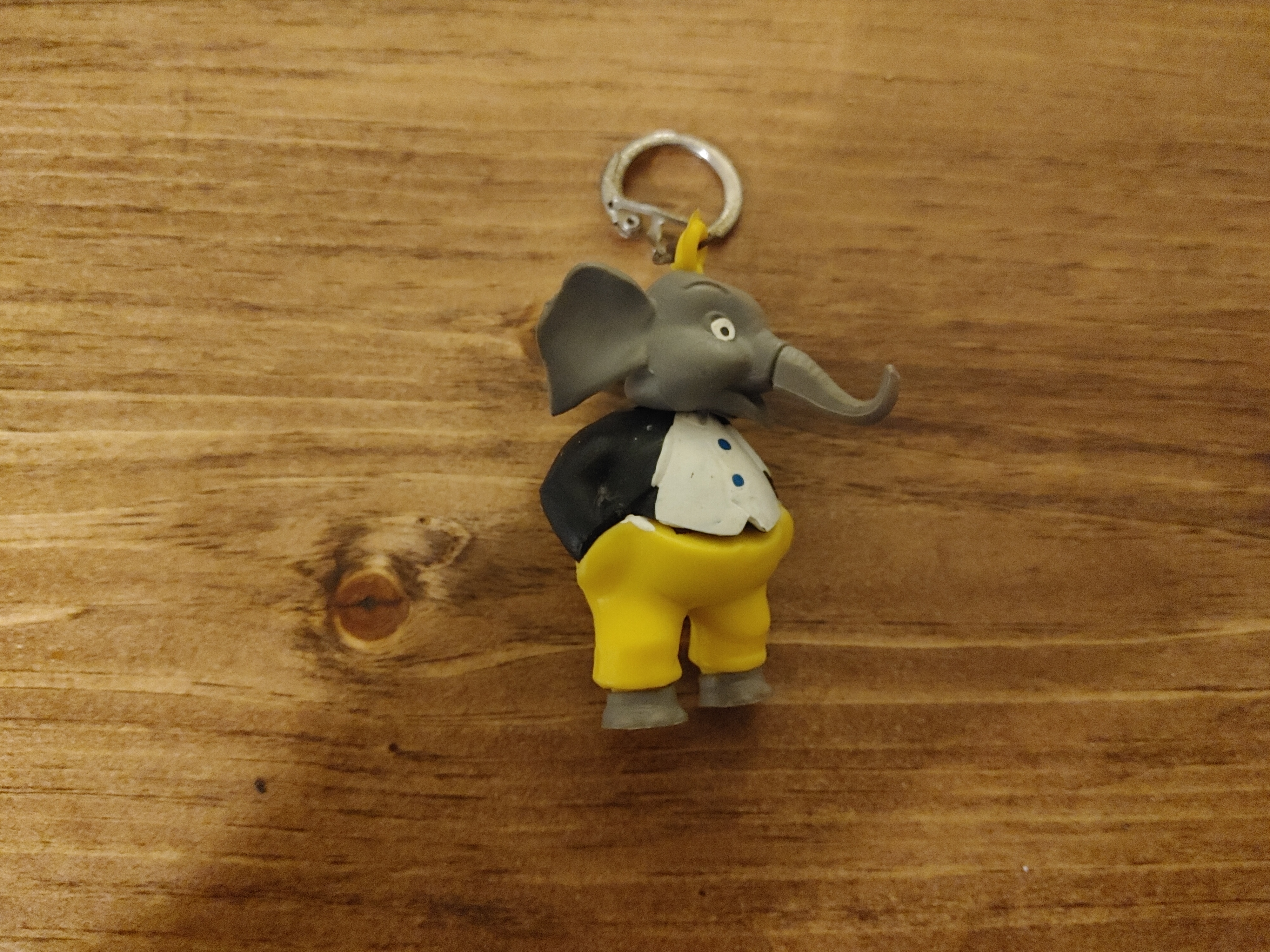 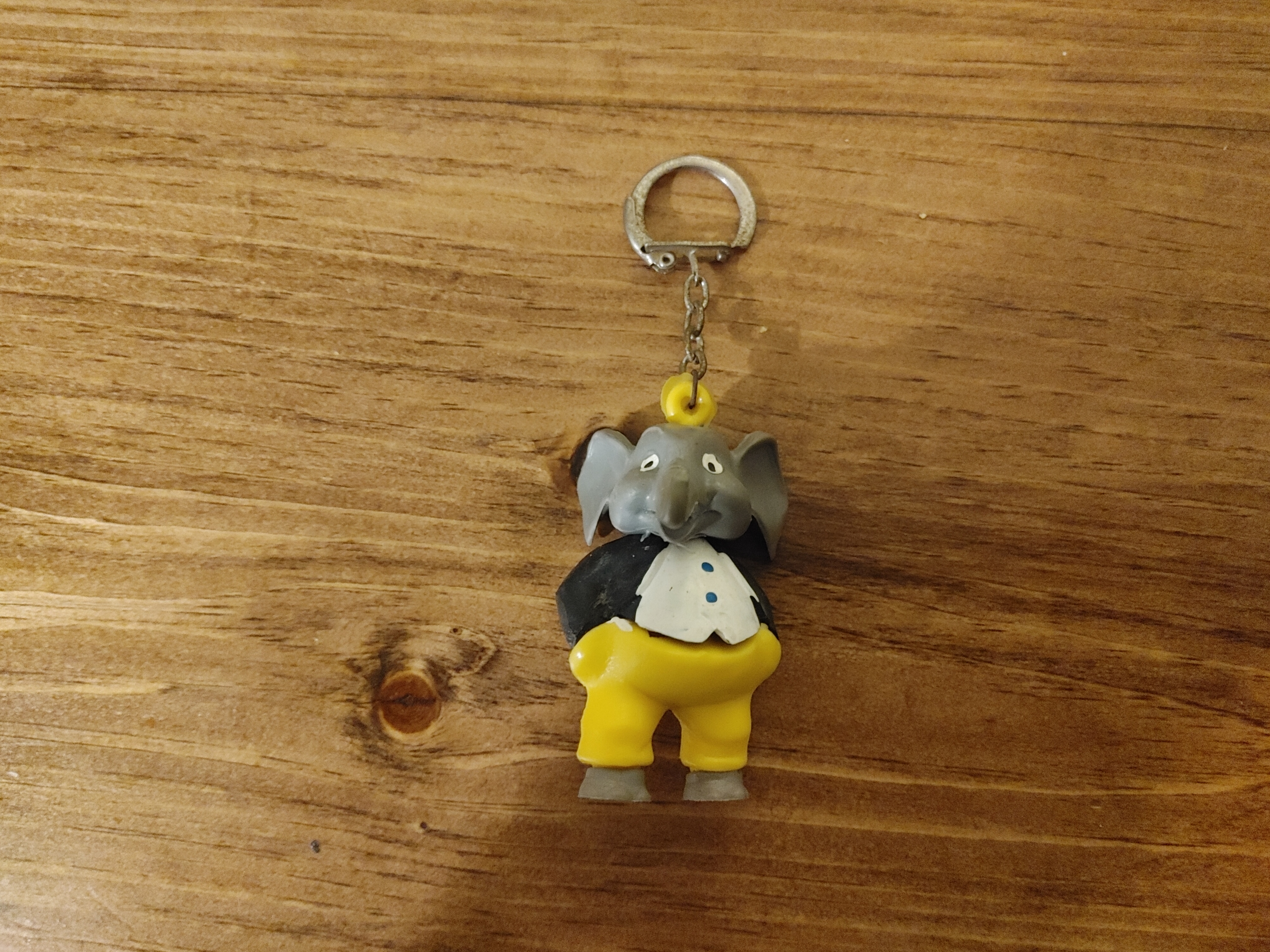 Having memorized the shape of the toy from the film, and noting that the shape of this keychain was identical, I jumped out of my seat and punched the hair! Second guessing myself, I conferred with two coworkers who were impartial, and they concluded that I was correct in my discovery (thank you both for that!).

Within five minutes, I had purchased one of only two of these keychains that I could find online. The other one was heavily damaged, and looked almost melted. It also had an incorrect colour scheme, as the torso did not have the shirt painted white (I know the shirt is white in the movie, because you can see the light from the Nostromo computer gleaming off of it). The one I purchased had the white shirt, and it was nearly flawless other than the fact that the segmented parts were loose with age.

If someone has made this discovery before, I wish I could give you credit. But as far as I'm
aware, this is the first time this item has been positively ID'd. Even if it has been ID'd previously, I'll still treat it as a victory, as I sourced it on my own time without any prior information.

I'm not sure anybody else besides myself would have any interest in a prop as obscure as this one. If someone is, just be aware that the Elephant Man keychain seems to be extremely rare. At some point I'd like to either 3D scan or make casts of him so that others will have the option of owning one. Until then, I'm content simply with the discovery of this elusive prop.

Now to hang him from my computer monitor...

I never noticed him before.
Awesome find.

Finally, great research and great catch The Alien set is full of those "Hoptimists and Gashapons
Skin Job 66 (Fred) had made intensive research on those. If you want to visit Propsummit.com and the Alien page you'll see it for yourself. 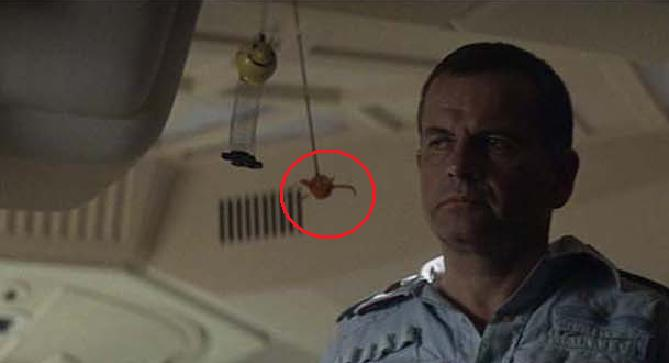 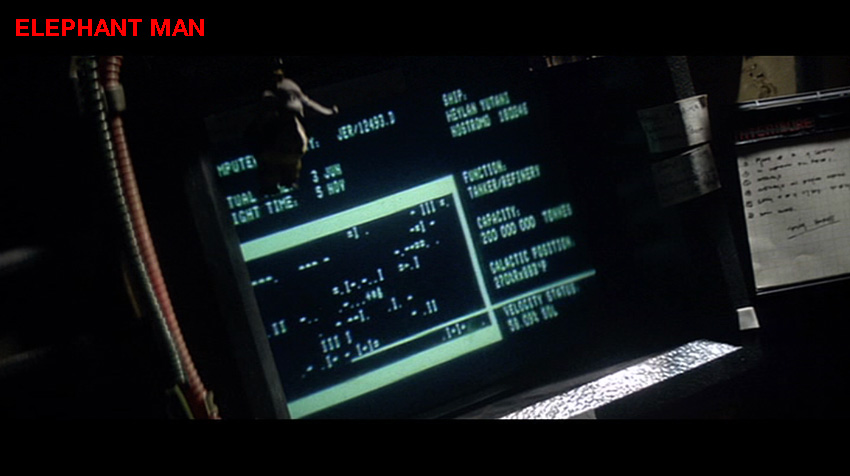 joberg said:
Finally, great research and great catch The Alien set is full of those "Hoptimists and Gashapons
Skin Job 66 (Fred) had made intensive research on those. If you want to visit Propsummit.com and the Alien page you'll see it for yourself.
View attachment 1557586

Funny you should mention that, because Propsummit is exactly where I went to find out about as many of these as I could! After going through that thread several times over, I couldn't find an answer to the elephant. Decided to take matters into my own hands.

Oh, and as an aside, those Action Birdies are so difficult to find! And don't get me started on the hanging Smiley! They're still on my need-to-acquire list.

This is terrific! I can feel the enthusiasm reading your post, which makes me very happy indeed. I honestly never noticed any toys at all in the movie, but the dedication is great! We all have our small obsessions, embrace yours!

As you can see this is the type of "Life-like set" Ridley wanted, as crammed with stuff (like the sets in Blade Runner)
Alas, for us collectors, it's difficult (not impossible) to get some of the little props/toys that were used in the late '70s, early '80s

joberg said:
As you can see this is the type of "Life-like set" Ridley wanted, as crammed with stuff (like the sets in Blade Runner)
Alas, for us collectors, it's difficult (not impossible) to get some of the little props/toys that were used in the late '70s, early '80s
Click to expand...

Too true! But maybe it's a good thing that it's a difficult task. If I was able to purchase everything I wanted from the Alien movies, Blade Runner and Red Dwarf, my home would look like a really bizarre antique store to any guests that stopped by.

At bare minimum they would raise an eyebrow at my extreme obsession over Braun products from the 70s and 80s.

This is a thread after my own heart. I appreciate the dedication and obsession with these tiny but interesting details.

brendonsmall said:
This is a thread after my own heart. I appreciate the dedication and obsession with these tiny but interesting details.
Click to expand...

Thanks! Yes, obsession and I are strange bedfellows.

It's almost a shame there will always be small background details and props that will be impossible to positively ID. But then maybe that's for the best. We wouldn't want all of the movie magic spoiled for us!

The hunt will continue indefinitely, of that I'm certain.

Toy Story 2 Woody's Round Up Radio
2

Trying to identify this prevalent... tape recorder? I think?

B
Hand welder from Aliens