Vagabond Elf said:
Have you done silver over white before? In my experience, silver over white tends to lack depth. Gloss as a base coat also often lacks depth. For good metallic effects I usually go for a satin or matte black or red base coat.

And yes. Always do a test piece when combining new paints - you never know what's going to react!
Click to expand...

This was the first time I've ever used white as a base coat. My typical setup is a grey or black primer followed by black base coat. I've found that gloss gives me the best results for steel, silver, or chrome type paints. I made the mistake of not testing this time because I use the exact same brand and type of pain, only in black, and never had troubles with it. It's a good reminder to always test new paints before applying to the actual model.

I'll give the matte finish a try again to compare results. I have the head ready with a black base coat this time, so hopefully I'll be taping and painting trim in a few days.

Krats said:
Oh wow, this looks awesome. I'd love to take a crack at one of these, I just need another four or five hours in every day so I can cram everything in!
Click to expand...

Vagabond Elf said:
The one that ends in 6541. Seeing the eye shape can be tricky and there's still a bit of debate about the details, but they're definitely a wide cylinder on top of a narrow cylinder. Here's the best photos I could find quickly.

Remember there were only 2 or 3 physical R5 domes in the first movie, and they blew one of them up. So these are all repaints of the same physical object.

Your image ending in 0965 looks more like the simplified art the animated serieses used.
Click to expand...

Krats This is a shockingly easy build snice it's just a few screws after printing and a drop in jetbot kit, I'm also publishing a guide for the coding, doesn't take more than an hour to get running with the camera and a controller.

Vagabond Elf ANH Despecialized to the rescue! I see what you mean about different versions, the Jawa droid sale scene kept alternating between 2 different versions from shot to shot. But I did get some great caps, I cobbled them and a few others together into what you see below. It's sort of my fav features of all the versions put together. I also added the side and back features and improved a few things like the spacing between the eye/nozzles. Still haven't checked out the site with the proper plans, I sort of want to but that's not my shtick. I like recreating these from references, plans feel like 'cheating' and I like putting my own spin on things. I did keep the other nozzle and protrusion versions, I'll publish them all so you can just pick what you like. 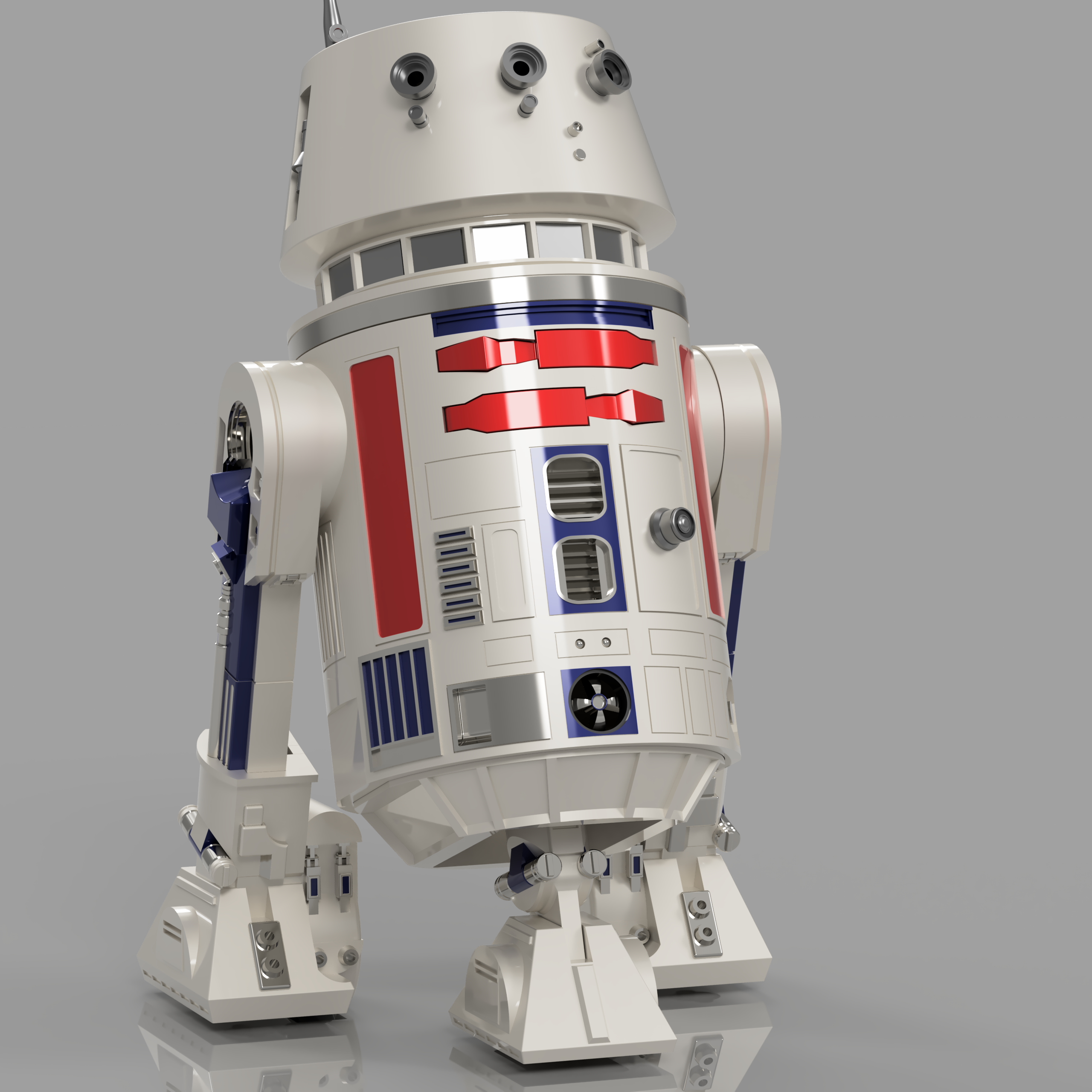 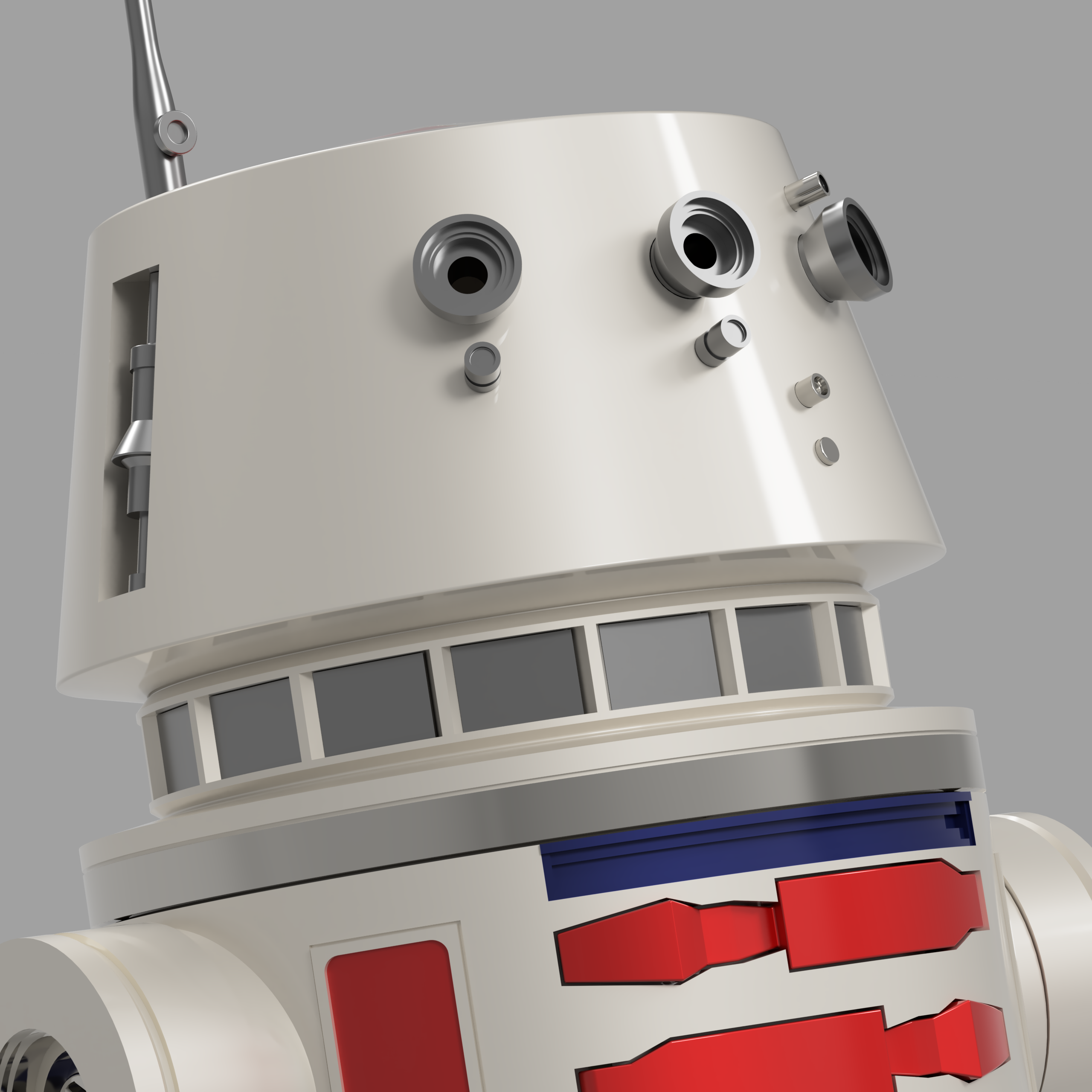 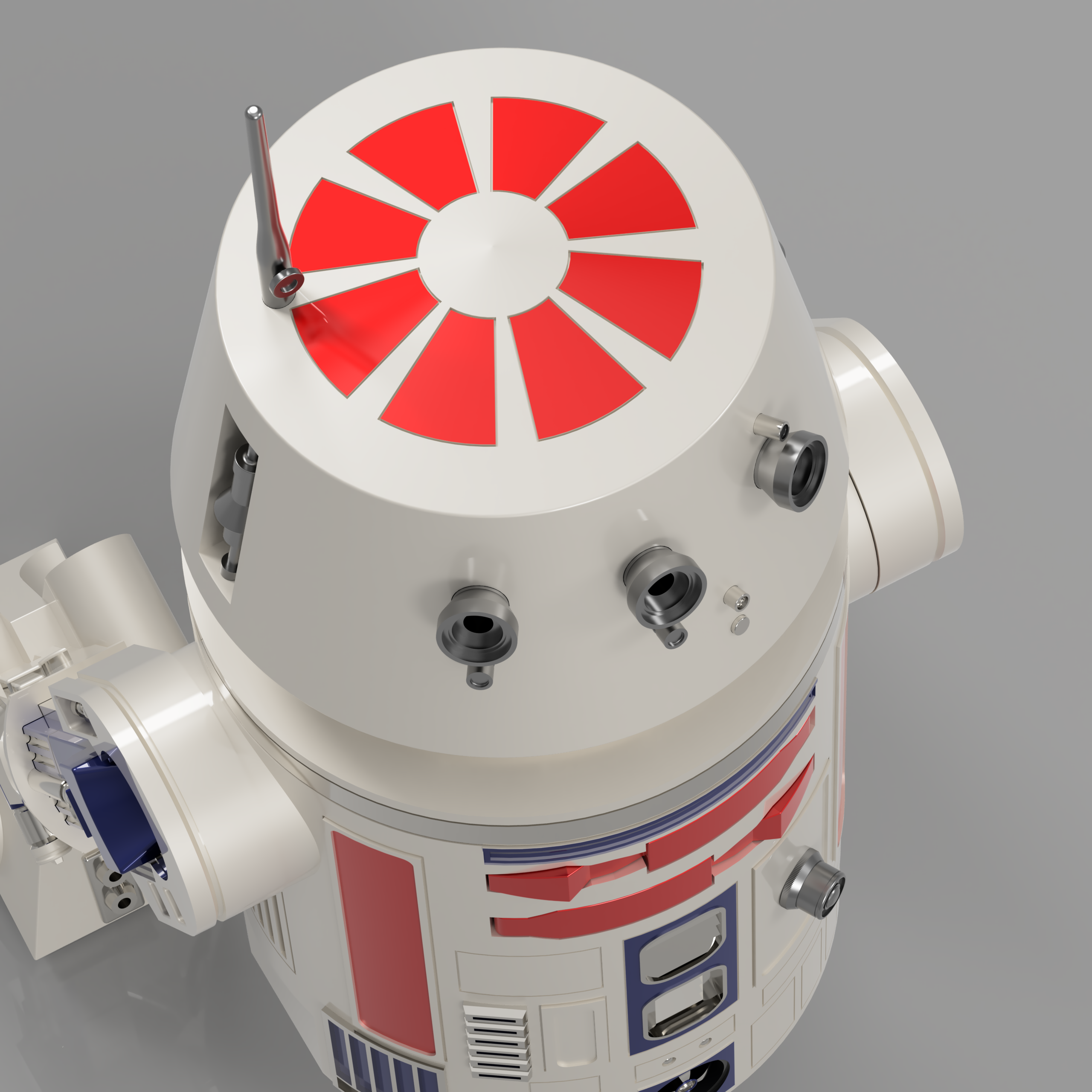 There's actually 3 versions in that scene, although it might only be two different domes.

The shots with R5-D4 in two-leg mode are one of the "Kenny Droids" - the costumes that were worn by a small person, usually Kenny Baker - with an R5-D4 dome on top and Kenny Baker's long time performing partner Jack Purvis inside. (My personal theory on why the R5 type dome is so much taller than the R2 type dome is that Mr. Purvis was quite a bit taller than Mr. Baker, and probably needed the extra room.

The shot where Arfive starts rolling away is the fibreglass "secret weapon" version, hastily deployed after shipping damage rendered the aluminium RC version inoperable. (There may be a handful of shots with the RC version, I'm not sure.) This is probably wearing the same dome as the Jack Purvis costume, but again I'm not certain. This body is actually being pulled with fishing line.

And then, of course, there's the pyro version with the F/X charge inside the head and the pop-up "bad motivator."

Vagabond Elf said:
There's actually 3 versions in that scene, although it might only be two different domes.
Click to expand...

Hm. I think there were just two props used to play R5. There's a Kenny with red stripes and an R5 dome, and there's the fibreglass hastily-deployed one.

The Kenny unit can be seen waddling along during the opening of the scene, and had a small Tunisian performer inside it (not Jack Purvis, who played the chief Jawa) during the droid lineup scene.

There are photos of the RC R5 with red stripes on it and an R5 dome to the side, being prepared for filming. The plan was to have R5 perform the 2 to 3 transition, then roll along and have its head blow up. There is behind the scenes footage of this droid being tested. However, it was never used in the final film.

First, the RC R2 couldn't do the leg drop properly, possibly because of damage it incurred during the airfreight shipment to Tunisia. This involves the famous faceplant footage.

Second, the RC R2 had an internal metal platform that contained the electronics. This platform stuck up above the neck, and into the dome area. That meant, of course, that the pyro wouldn't fit - there was no room for both the electronics and the pyro.

The discovery of this problem on the day of shooting was documented by both Roger Christian and Gary Kurtz, and is why the fibreglass shonky R2 was hastily wheeled out, painted up, and used for the rolling off/head blow-up scene; pulled on fishing line.

Half painted R5, this is the V1 head with the eyes too far apart, it was close enough to be worth making, it'll be my weathering test. You can see the V2 R5 head peaking over the R2 dome. Think everything is pretty much finalized for posting. I haven't gotten the object libraries loaded yet for object recognition and tracking (did get it working on a stand alone Jetson so getting close) but the camera feed works from a computer and it scoots around really well with an Xbox controller, which was my base 'success' criteria. 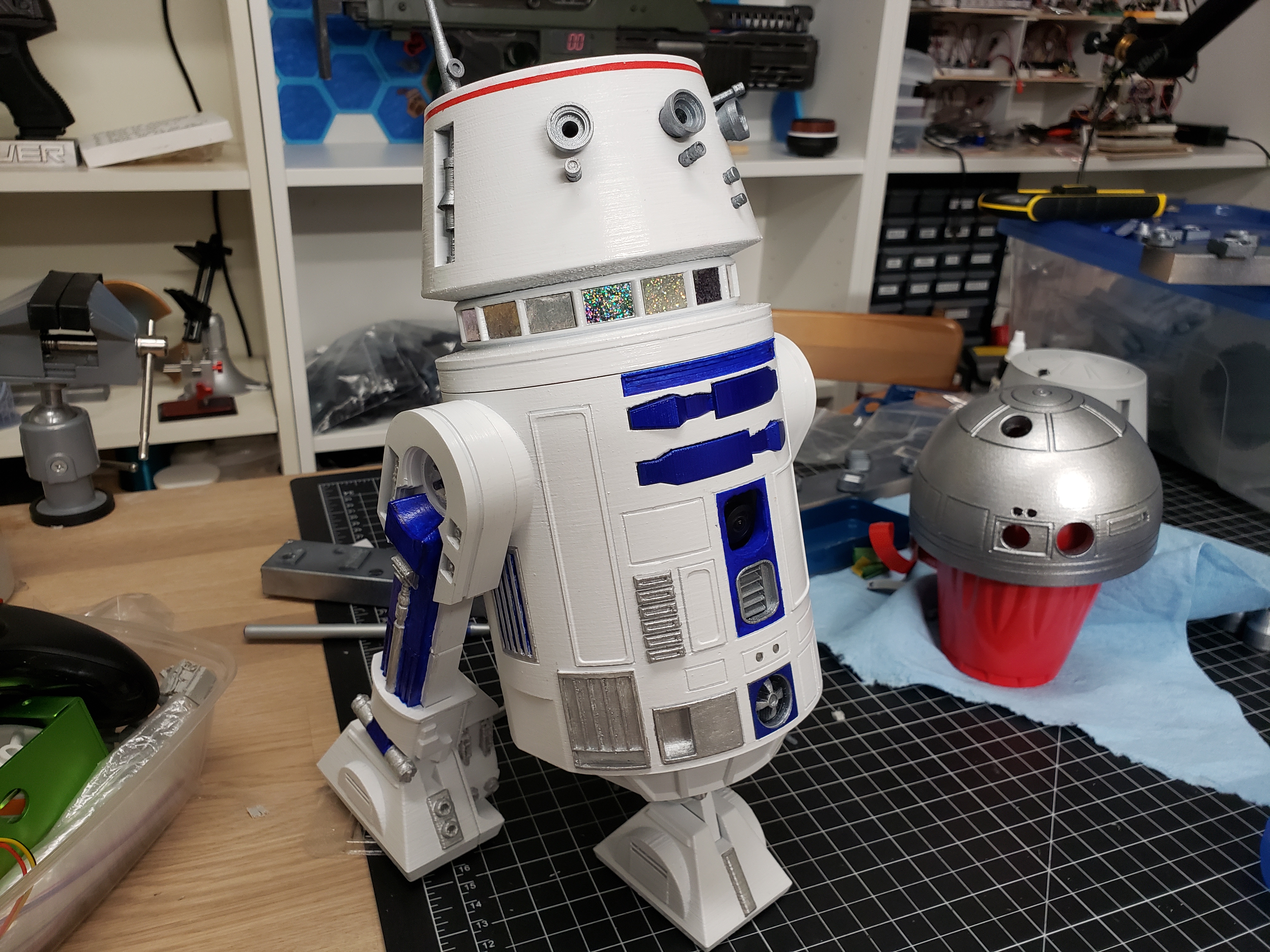 Still some work to do but getting close! R2 is the only one with a Jetson Nano and a camera in it atm, still have some drive kinks to work out before doing a second AI one. 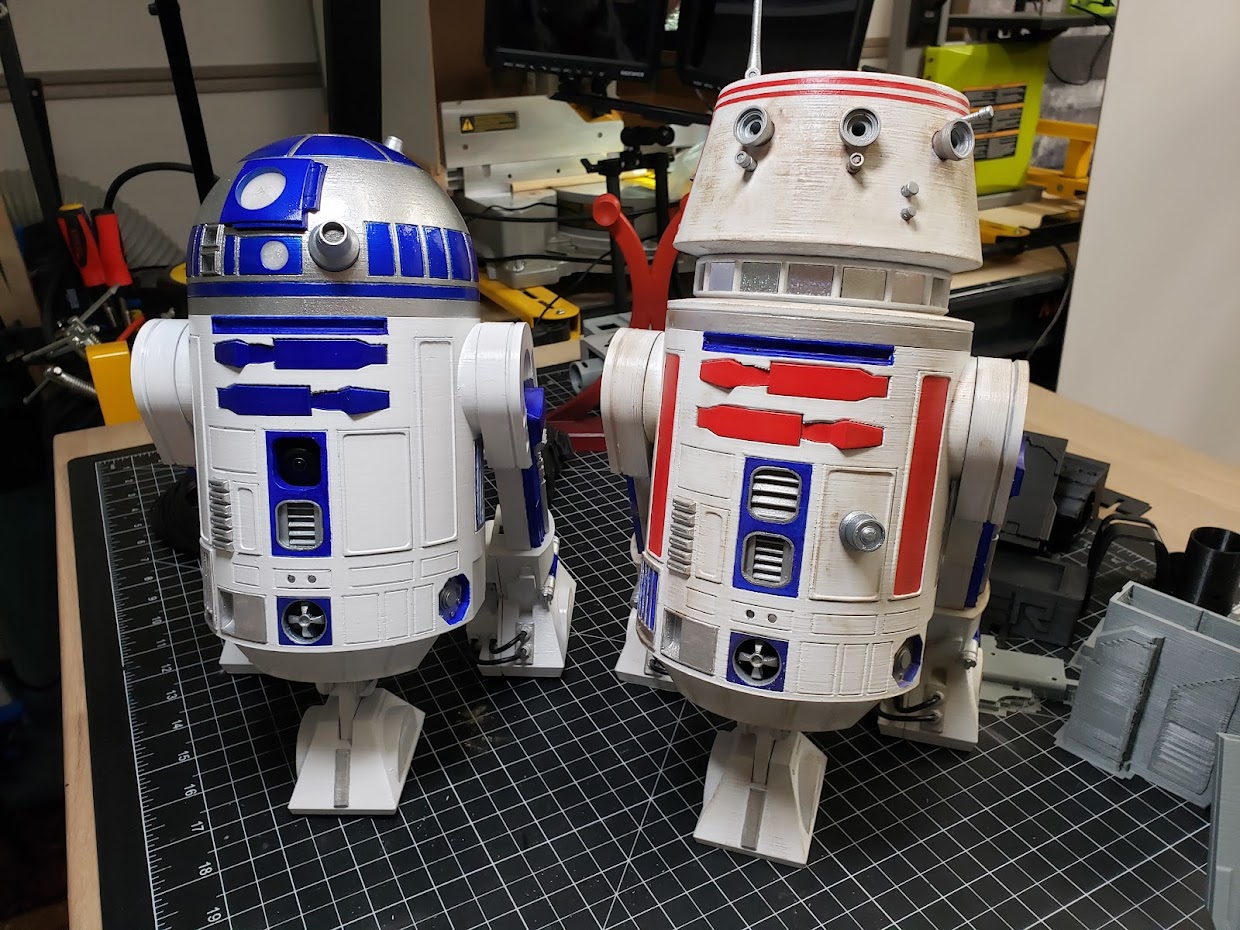 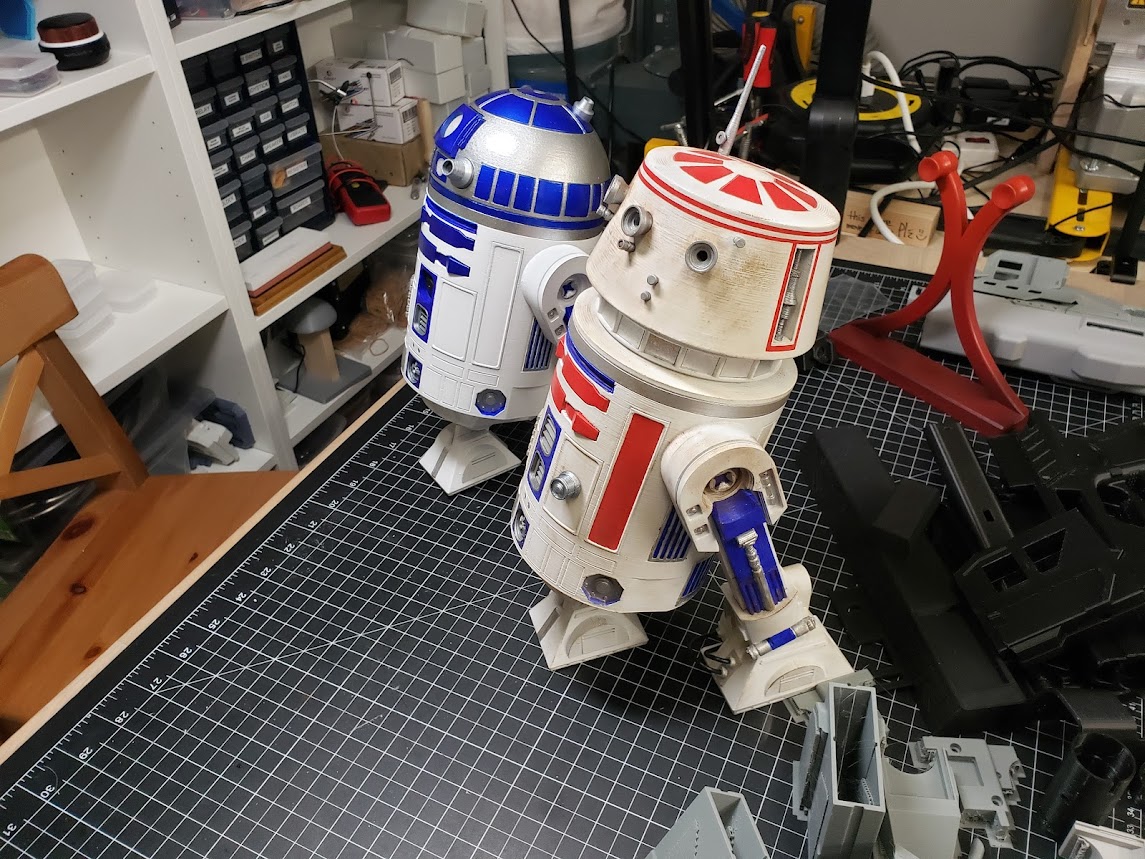 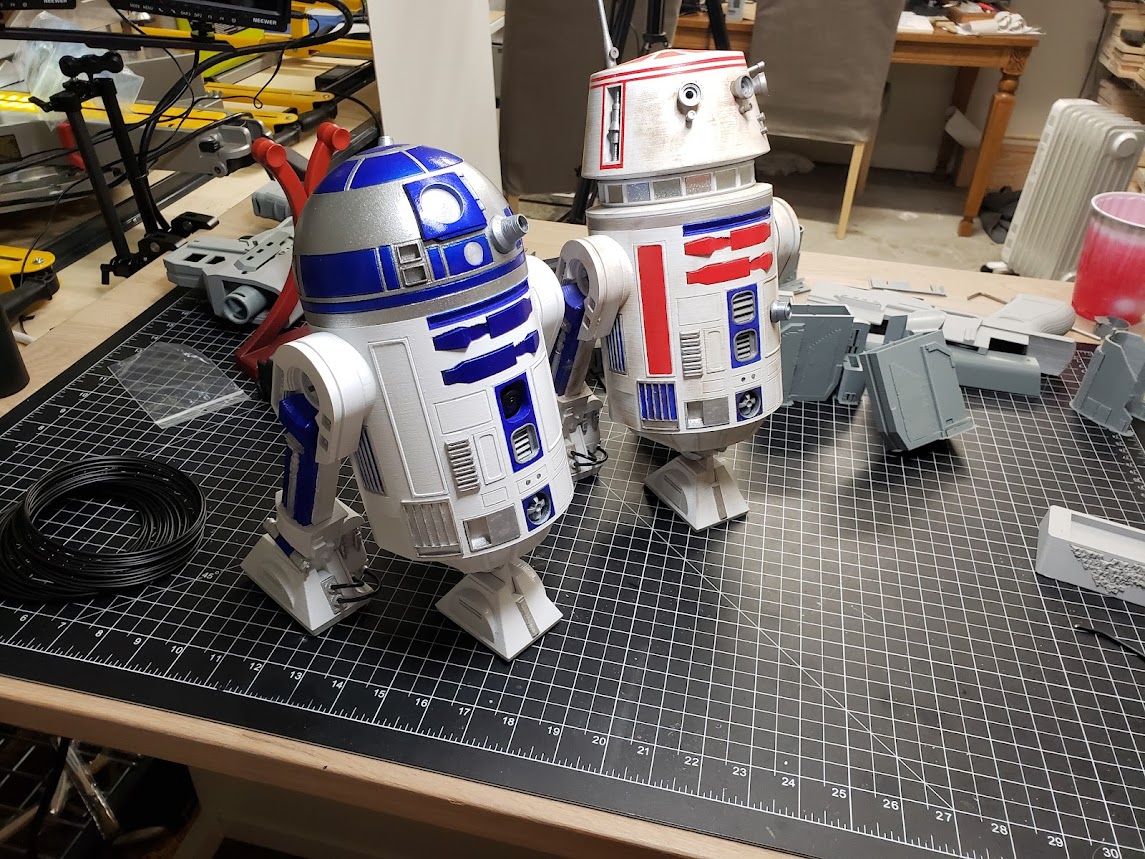 Now I have it rolling around by remote reliably it's time to add more functions. Head now moves Via an N20 motor in the body and a gear ring added to the head. There's also an Arduino in the head to manage the lighting via calls from the Jetson Nano: 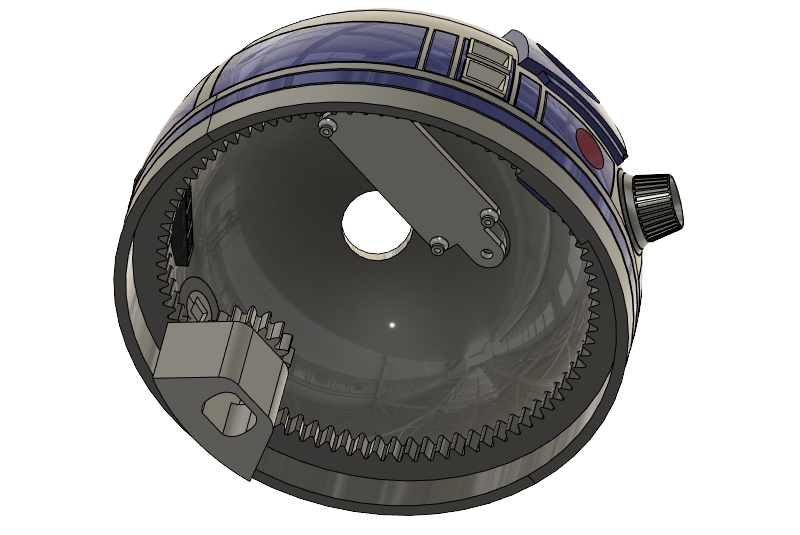 Added all the lenses with mounts for addressable NeoPixel LEDs: 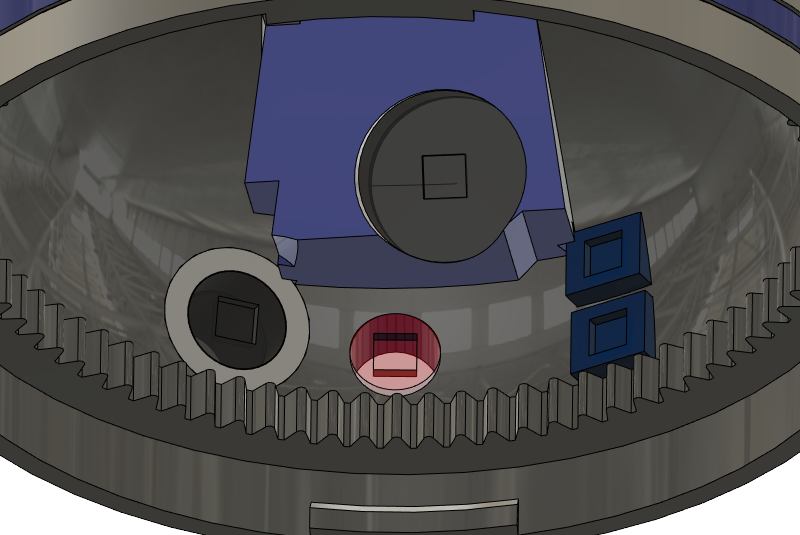 As soon as these are printed and Arduino coded I'll film a few short vids of it moving.
Last edited: Apr 12, 2022

Although, there's no lights inside R2-D2's main eye; anything you're seeing on screen is just a reflection.

Although, there's no lights inside R2-D2's main eye; anything you're seeing on screen is just a reflection.
Click to expand...

I get that, and I'll be tinting it on my one. But under the old pirate law of 'smokem if you gottem' there's a lens already there so I'm adding a mounting! I'm not sure I'll be lighting it up or I may add it as a toggle in the code for purists, I'll see when I get there

Expansion on clear resin because of light bleed is no joke! It was a lot of elbow grease to sand it back down. Ended up removing the LED mounts because the bleed made them way too far off. I may add small FDM brackets or... a glue gun... I did the nozzles in clear just because it was already in the tray, won't matter after painting anyway

RPF PREMIUM MEMBER
Can't wait to see these in action!

Almost ready for a release! I have the final head model done: 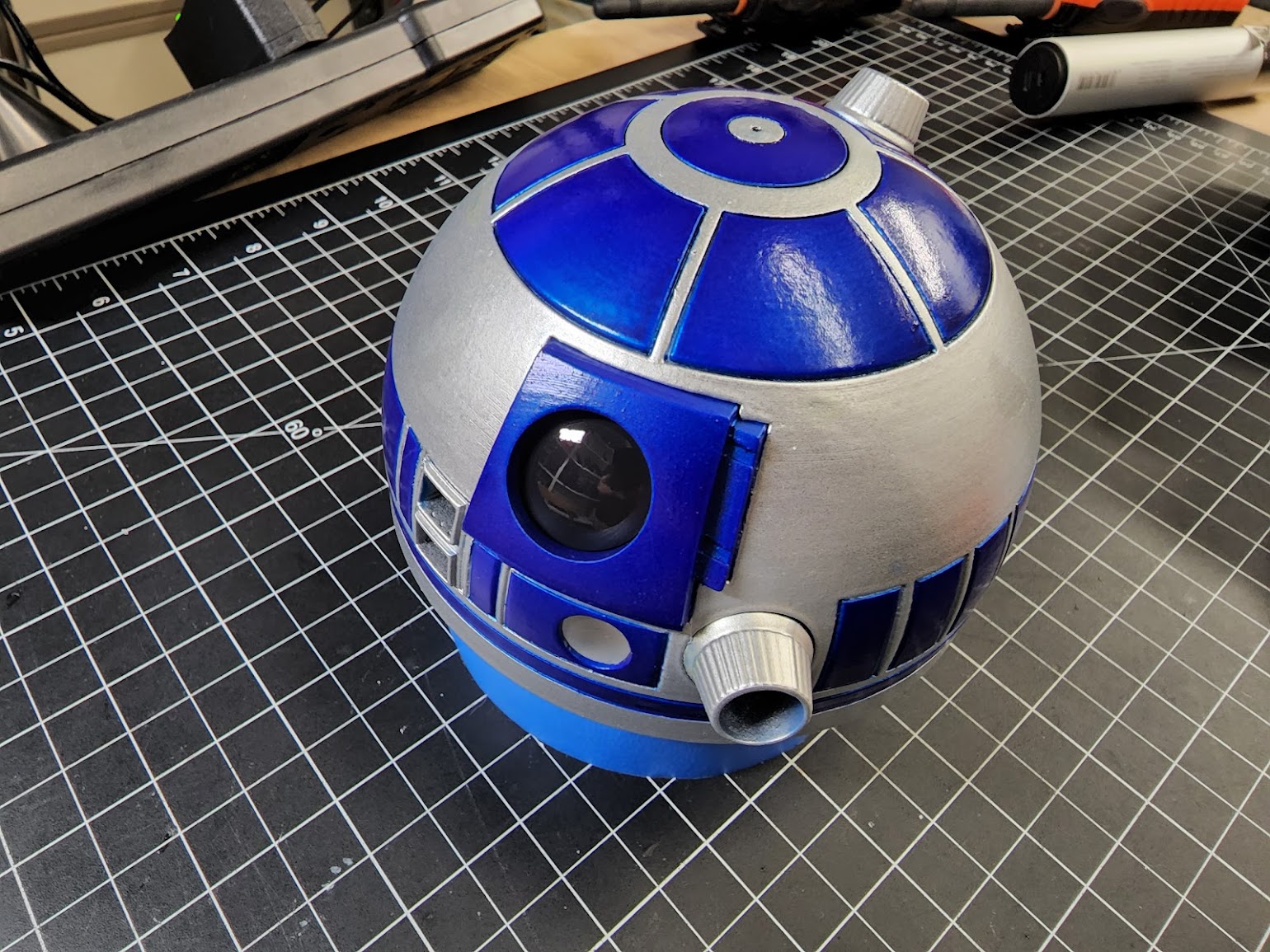 Thanks all for the feedback, I think it's pretty close to canon now.

The ML model for object recognition has been programmed by my friend Elliot in Australia, I'm in the process of connecting his Edge Impulse model up with the Jetson computer in the R2. We've got the stormtroopers, Vader, and the IG11 set up with object recognition. If it works properly it should recognize Vader and the Stormtroopers and log them as 'authorized' and when it sees the IG11 it should take a picture and send it to my phone along with an alert. This is the the 'baseline pass' test for it to be considered done. Once it's done I'll release it along with a clean, but programmed, Jetson image with Jupyter notebooks so you can use it with any controller and Elliot will do a more advanced video on how to train new models his Mission Robots channel.

I built a clean set for it to run through for testing: 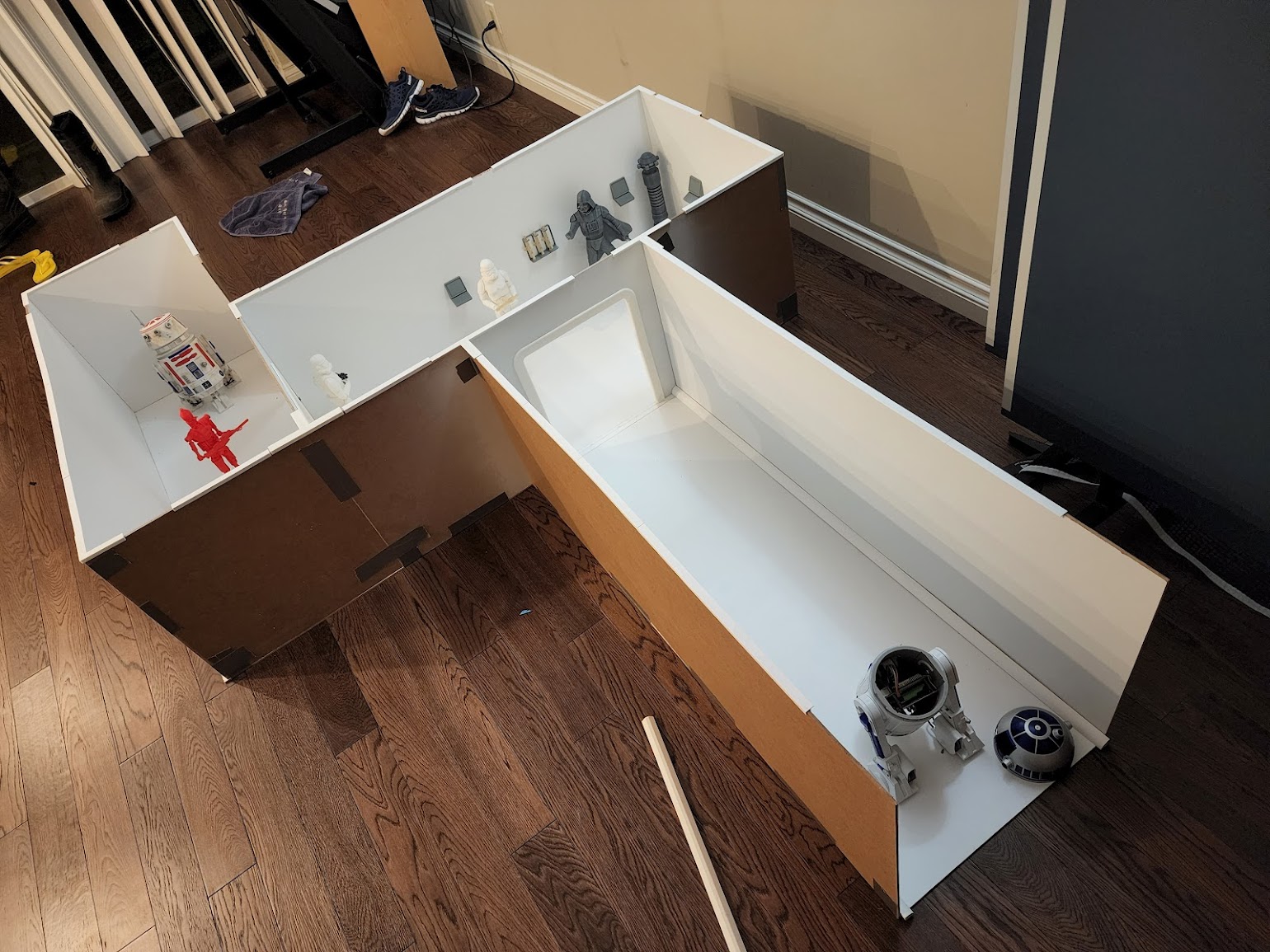 I'll add more detail to to set later later, it's a lot bigger than it looks, I can lay down in it. The figures are over 330mm (13") tall. I'm working on the ceiling and lighting now but I want to keep the walls pretty clean so the camera will have a clean image.

I did a little 'coming soon' segment for it in a video here if you want to see it running around (with the old head):


The V1 release will have all the head lighting working, will post an update when that's done, then one more update with the model link on thingiverse with the tutorial, home stretch!
Last edited: May 14, 2022

Yes, it has a ways to go, but it streams video, drives and I can record the stream. It was slipping all over on MDF dust from the build but it worked! I'll fix the camera resolution and exposure shortly..

Does Pledge still manufacture a floor gloss that can be used for airbrushing?