An old favorite from my childhood, I remember watching this series in the mornings before heading out to school.

I've already removed most of the parts for clean-up. I was on the fence about painting vs. bare plastic with a clear coat but there are swirls from the moulding process visible and I decided that it would still look toylike, so I plan to paint it, and it'll be my first time using Mr. Color laquers as opposed to the go-to Tamiya acrylics. It's a push-fit kit and the engineering rivals Bandai. This particular kit also includes the LED lighting; other than possibly adding a pair of LED spotlights on the base, it'll pretty much be an OOB build.

An old fave of mine too. Can't believe we had to wait forty-some-odd years to get a good sized, decent model of this ship. Very glad you've decided to paint instead of leaving it bare and toy-like. Watching your build progress.

Looking forward to it

And yes, Academy kits of recent years are quite Bandai like in engineering and fit

They had an F-4 Phantom kit that is press-fit molded in color as quite detailed. Even had waterslide decals as well as stickers like Bandai kits have

Also there latest F-14 kit was quite good as well

Yeah, I know it's been awhile, but I've managed to forge ahead in spite of the addition of a new member to the family who's a bit of a time-sink. But we love her anyway! 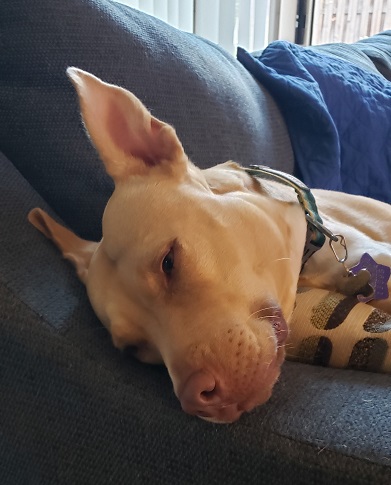 Anyways...I found myself overthinking the assembly and finishing process, and upon realizing this gave myself a mental kick. Hey dummy, stop and get to building! I was concerned about applying the finish coats; keeping primer & paint from affecting the press together assembly, taking somehow steps to mask areas to ensure a tight fit, blah-blah-blah. Then I decided to do something that goes totally counter to everything I've done in the past.

I must be mad.

Hell, why not? Nothing ventured, nothing gained.

But the results were better than I expected, no rubbing or scratching off. I'm really not too worried about durability because the ship will get a final clear coat of semi-gloss lacque anyway). And let me tell you, that MH leveling thinner is magic! Why haven't I tried this stuff before? Smoothest finish I've ever shot! Too bad it stinks to high heaven, necessitating a 3M respirator mask. The two primary colors I'm using are #79 Shine Red and #80 Cobalt Blue, thinned to a 1:1 ratio and shot through my H&S Infinity with a .20 needle @ 20psi. Really happy with the end product. 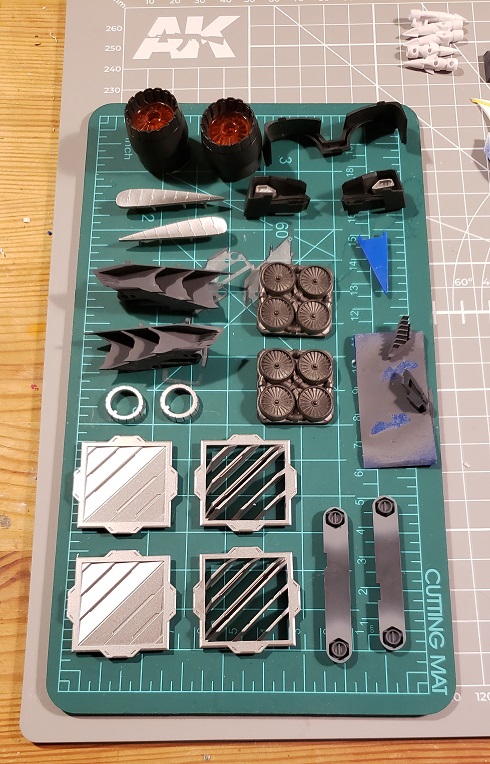 Overview of my progress so far. Still have yet to mask/paint the top fin of G1 (Mark's jet) and the missiles. What looks like orange peeling on the long blue side panels isn't really that serious, but everything will get cleaned up after final assembly. 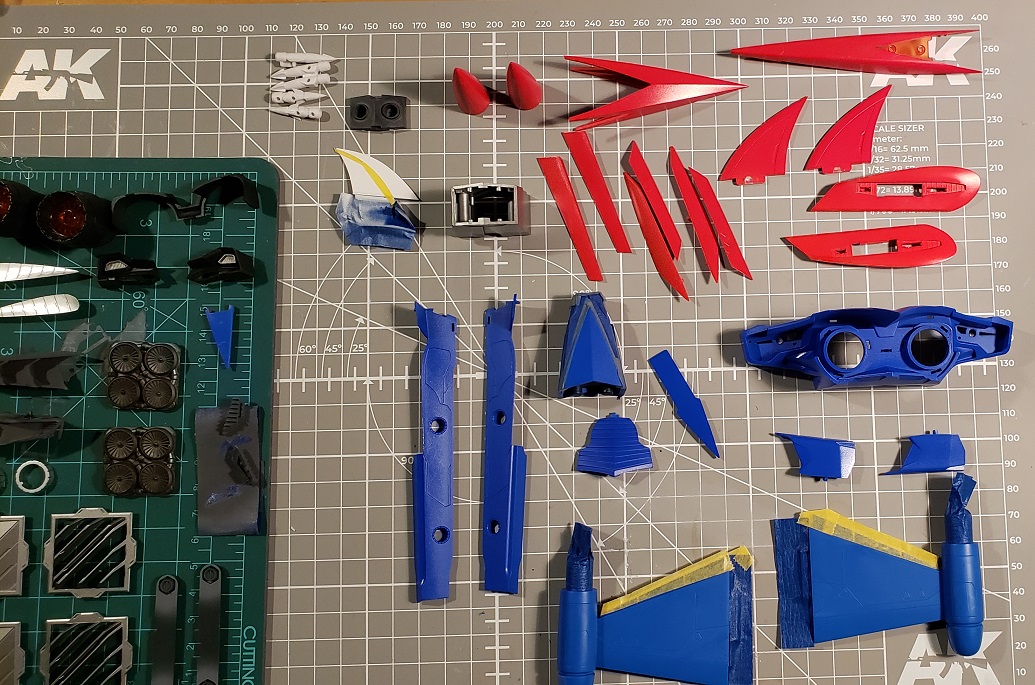 Most of the red finished parts. I painted the clear orange top piece on the left to match. Why'd they mold it that color anyway? 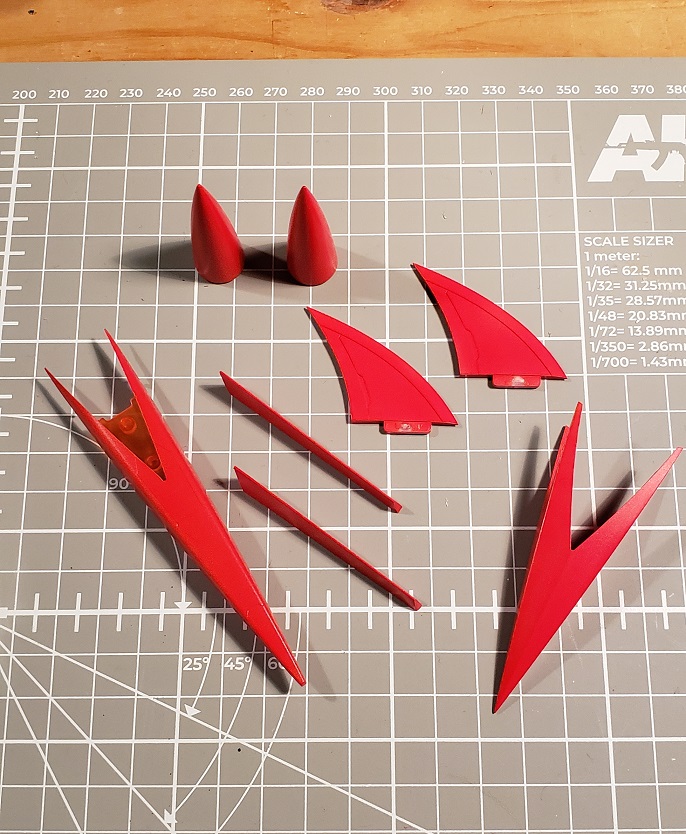 Here you can get a better idea of the contrast between the painted parts (at the top) and the blue plastic that the kit is originally molded in. 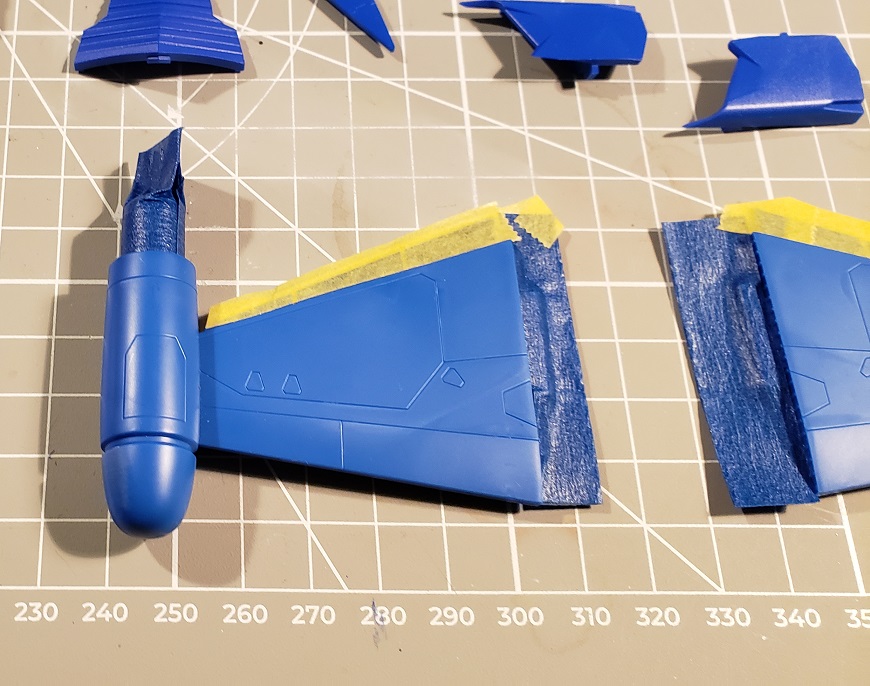 Upper and lower body halves have yet to be sprayed but I'll be doing that after they're assembled. Again, impressed with the minimal seams on this kit. Someone definitely reverse-engineered some Bandai kits.

Definitely looks better with some paint

As far as skipping the primer, I find myself doing that a bit more these days for most styrene kits. Most paints are good enough quality you do not need a primer so I only primer black if I want to take advantage of a pre-shade of sorts, or white if I want to colors to be a bit more vibrant, or I prime in cases where there was a lot of gap filling, has photoetch, resin, some other type of plastic, or different color plastic patches from scratch building

Progress looks great, paint looks awesome. I think I like the slightly darker blue than the molded color of the plastic. Also, guilty over here too of over thinking my builds before I even snip the first part off the runners. Would that be considered model builder's block? Any plans for doing any color modulation or shading/slight weathering on this one?

Pardon the messy workbench, but time for progress report...almost done!

Just need to add the center dorsal fin & rear landing bay door, and add the dome to the upper fuselage and the Pheonix can occupy shelf space beside the Eagle (see what I did there?) In all it came out okay in my eyes, there were some areas that I could have done better at. Gloss finishes are a PITA to get right; if you don't get that undercoat perfect, any little blemish will show. It also seems to be a dust and particulate magnet. I can't wait to get back to my next sci-fi based build that'll have a nice even satin finish haha. I kind of prefer the minimalist decaling, only placing the "F-5" registry on the wing (just like the TV show). The kit includes many more but they seem rather non-canon IMHO. I do like the concept of using metal contacts to transfer power. It eliminates the concern of space limitations in the model proper for both lights and a power supply, a feature I may try to incorporate into future builds. 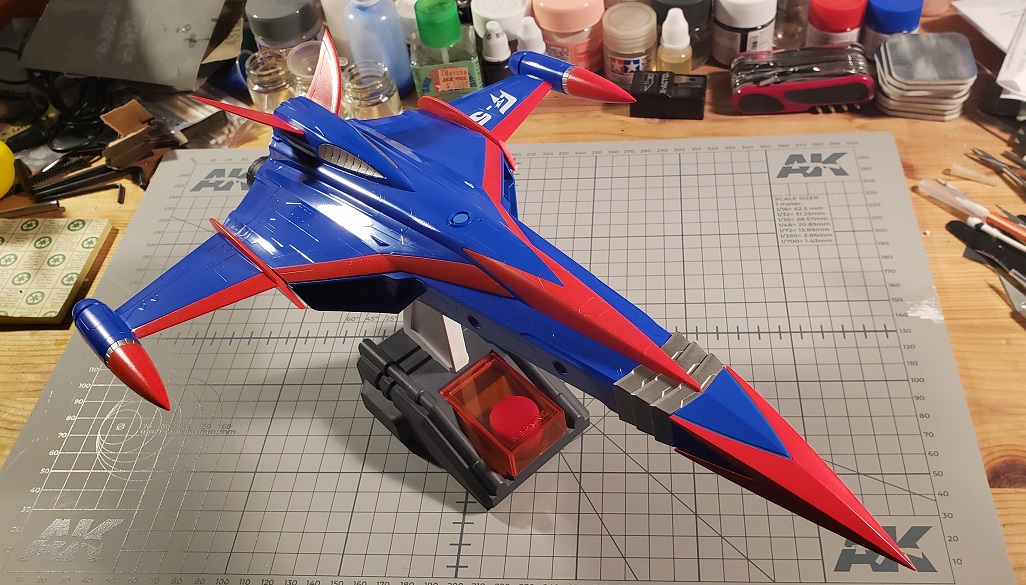 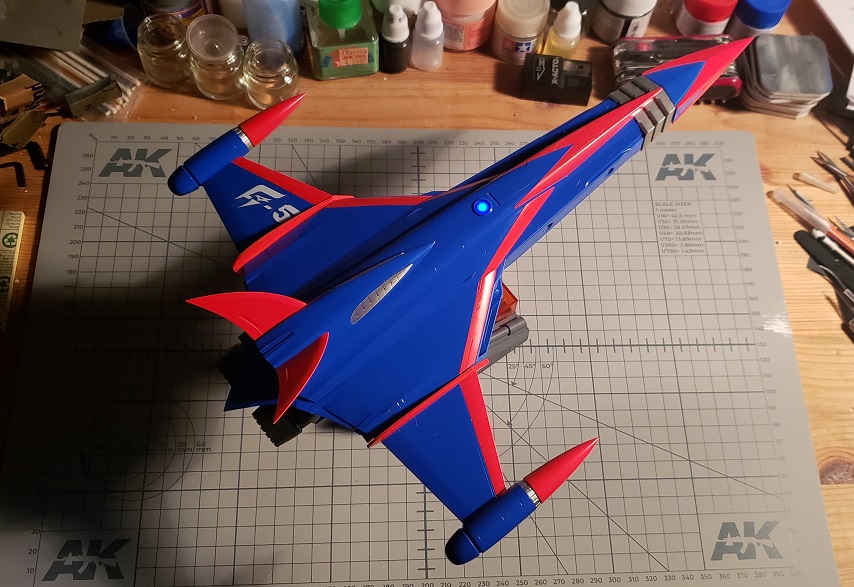 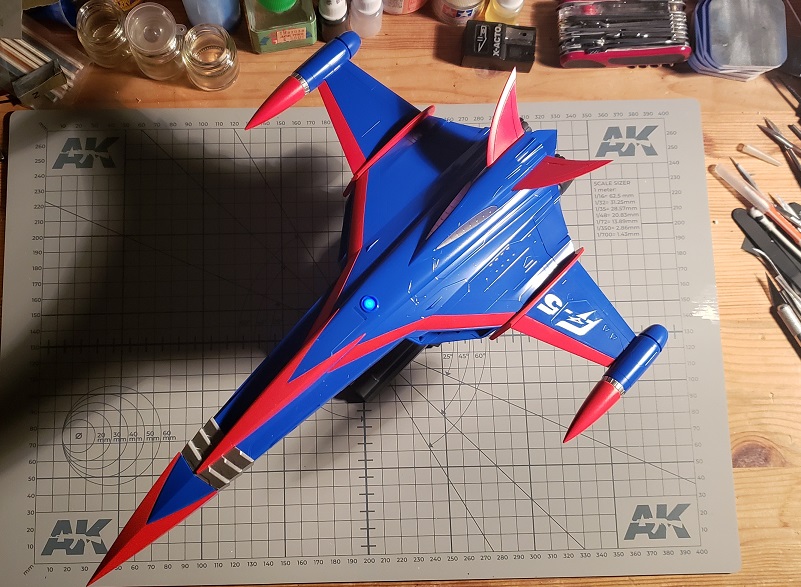 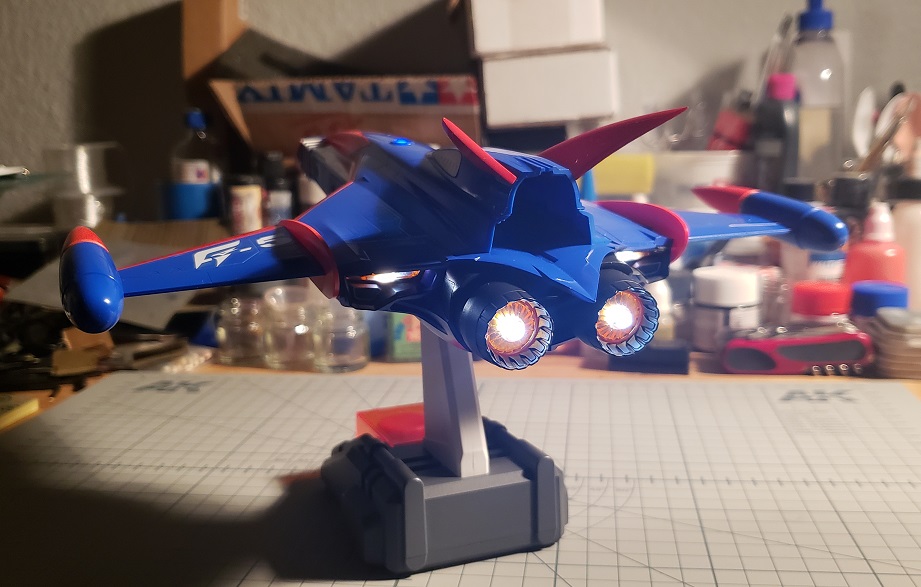 Regarding docked vehicels, and misle launchers and landing gear etc...how easy/hard is it to change between various configurations or do have to decide on them before hand and stick with it?

Regarding docked vehicels, and misle launchers and landing gear etc...how easy/hard is it to change between various configurations or do have to decide on them before hand and stick with it?
Click to expand...

The parts are replaceable even after final assembly. Optional parts are provided for the Bird Missile launchers (top) and Super Bird Missiles (bottom). The nose cone detaches for mounting G2, Jason's race car; the port/starboard wingtip pod doors are removeable for the platform & grapple arm pieces holding G3 (Princess's motorcycle) & G4 (Keyop's Star Buggy) to snap in, and finally (and oddly) the standard vertical stabilizer of Mark's G1 jet is swapped out for the slightly oversize piece that slides into the slot in the topmost fuselage between the two red fins. The rear bay door then snaps into place.

As for the landing gear, Academy thoughtfully provided shallow access slots to get a small bladed tool (or your fingernail!) into to remove the flush-mount doors. They are replaced by a piece that incorporates open doors and holes to press-fit the gear struts into...I put all those parts aside for now but will probably come back and build them up at a later date.

In all, this kit is really well thought-out. 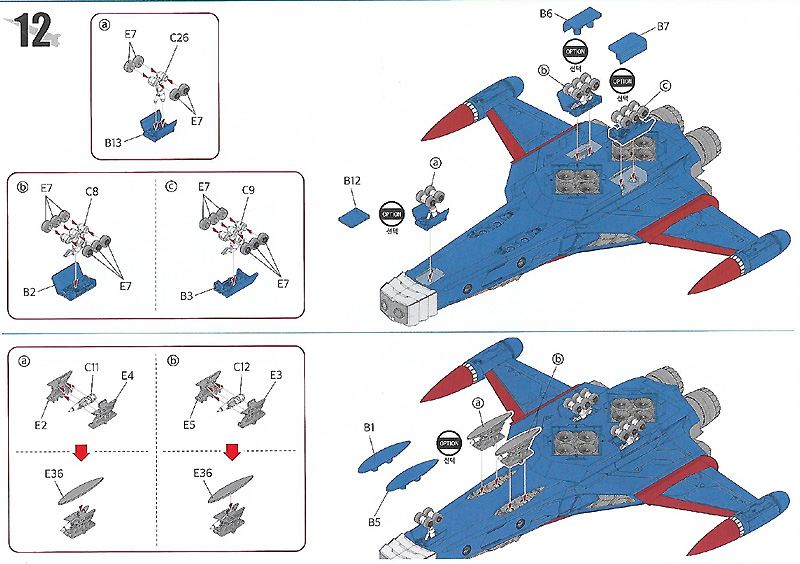 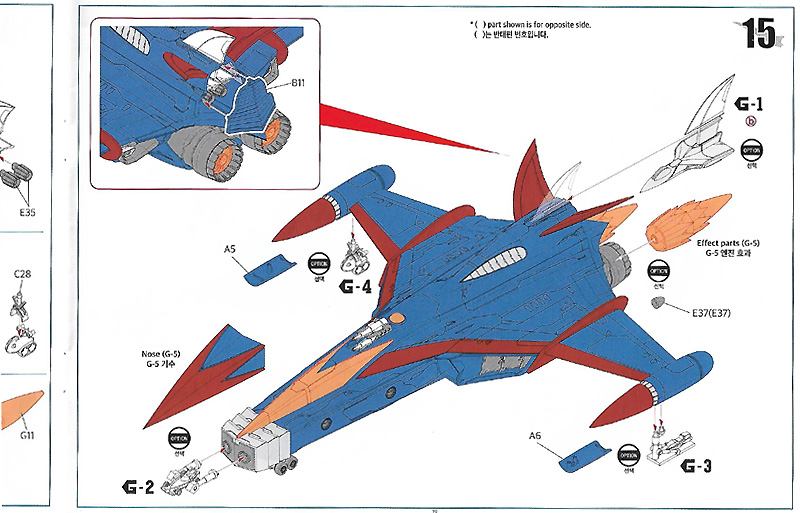 Final pics, she's done and mounted up on the stand. Turned out better than I expected, but I think it'll be awhile before I attempt something this shiny again. 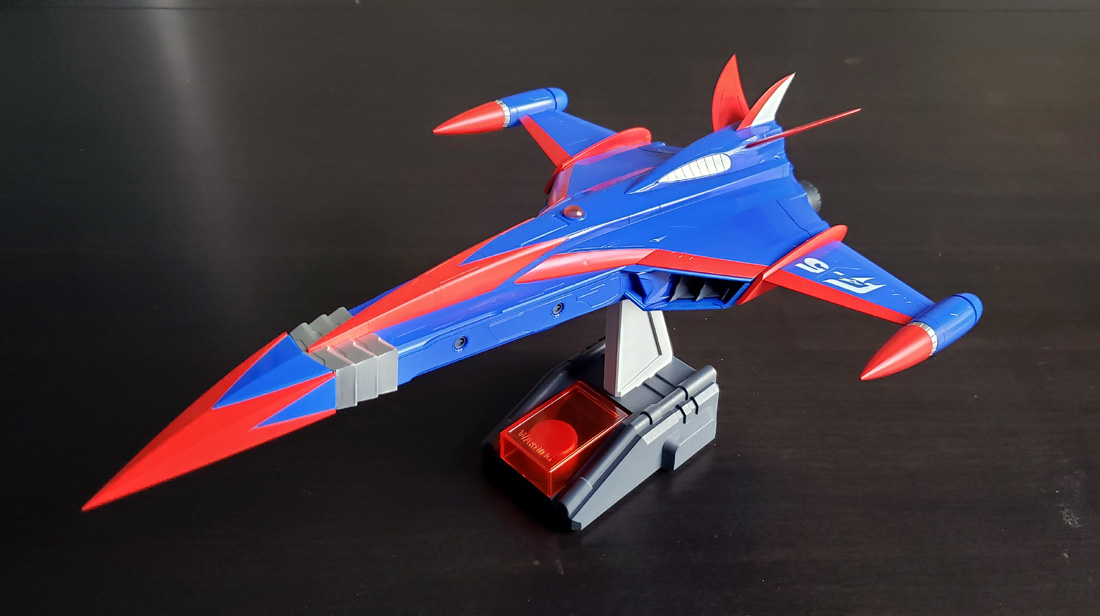 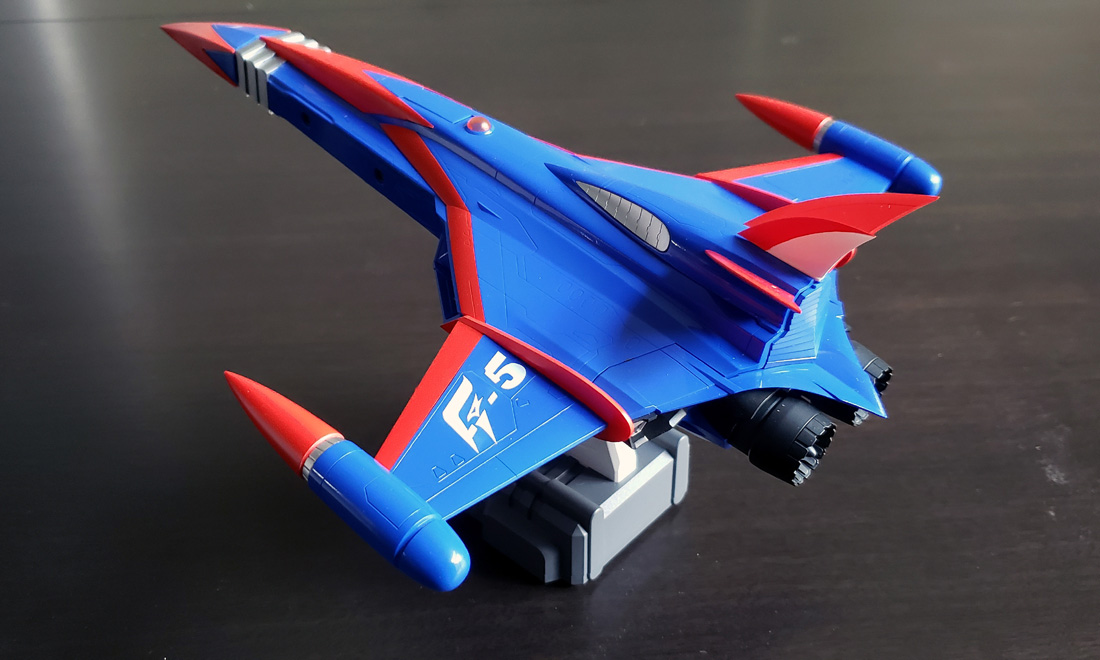 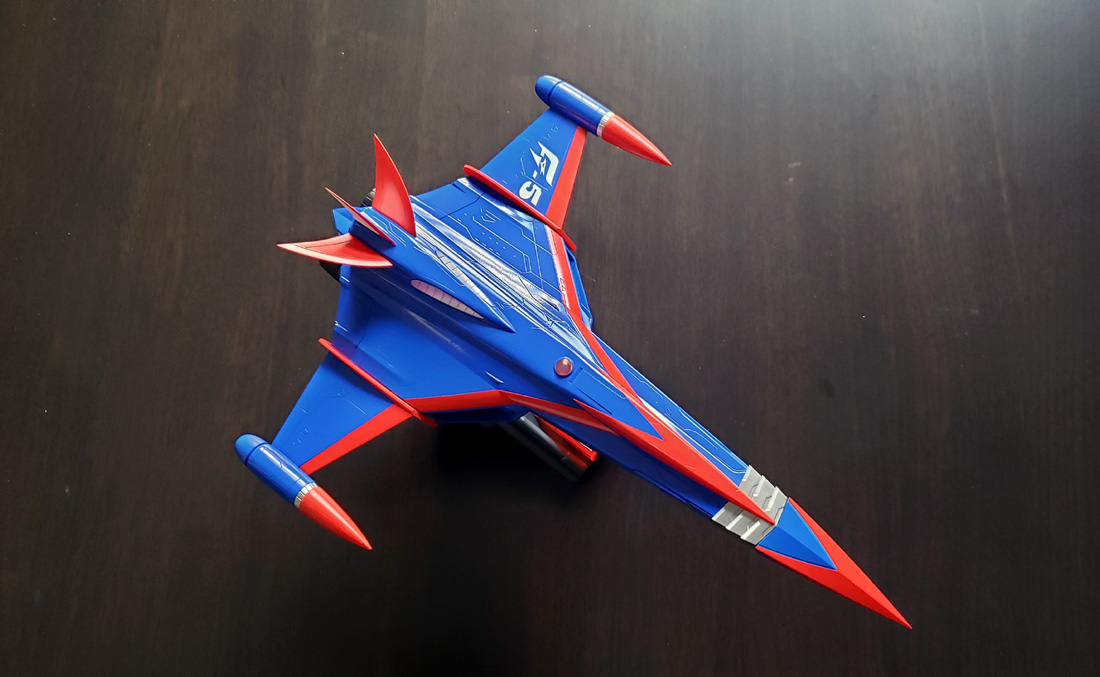 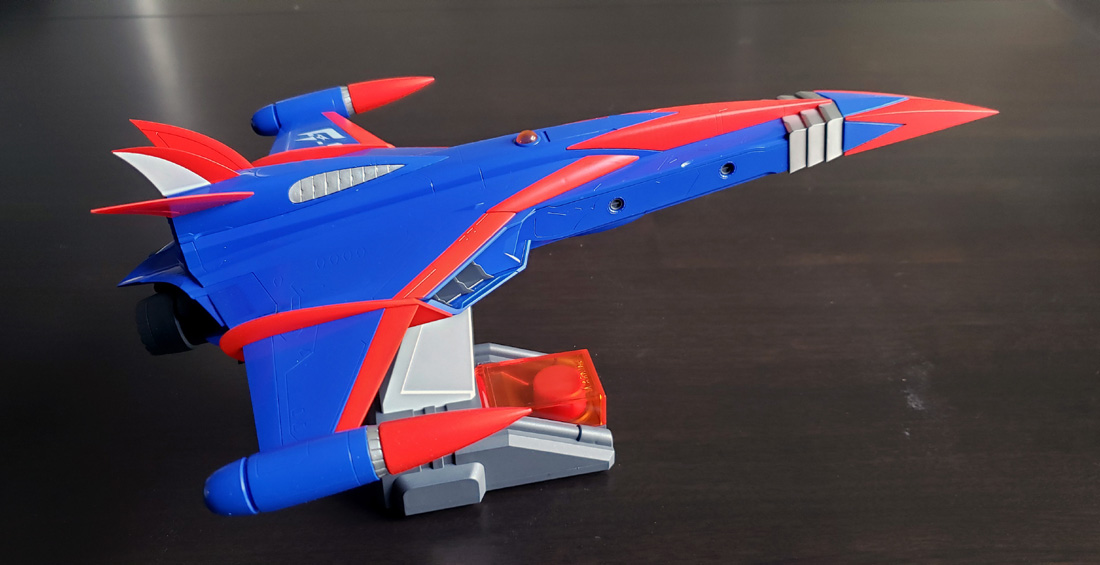 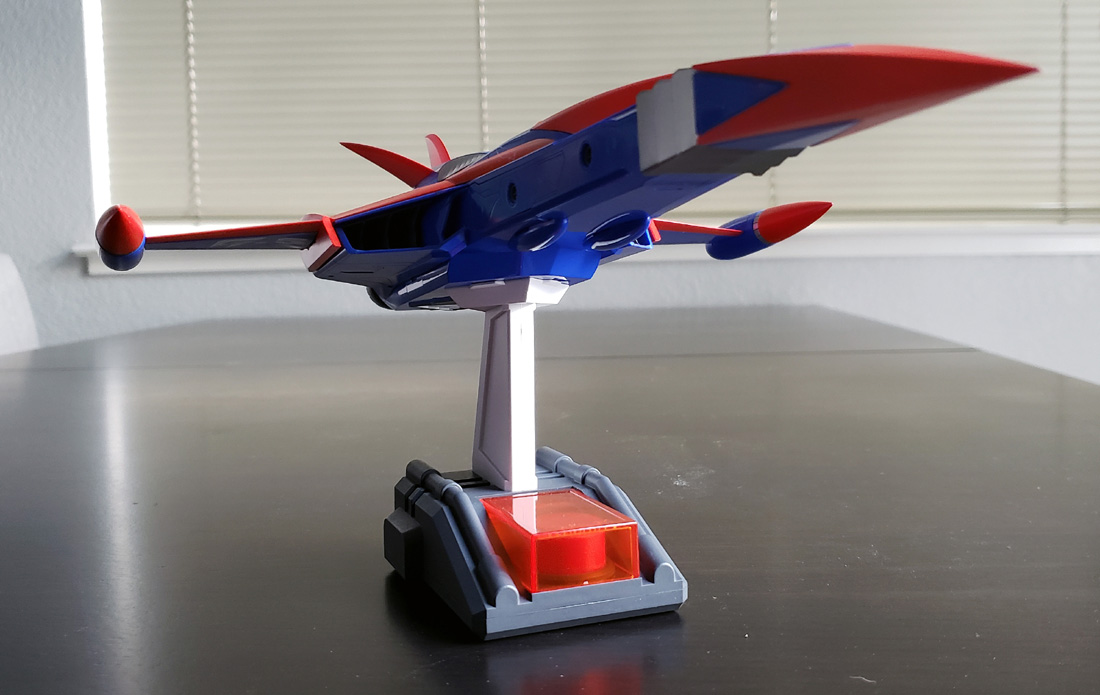 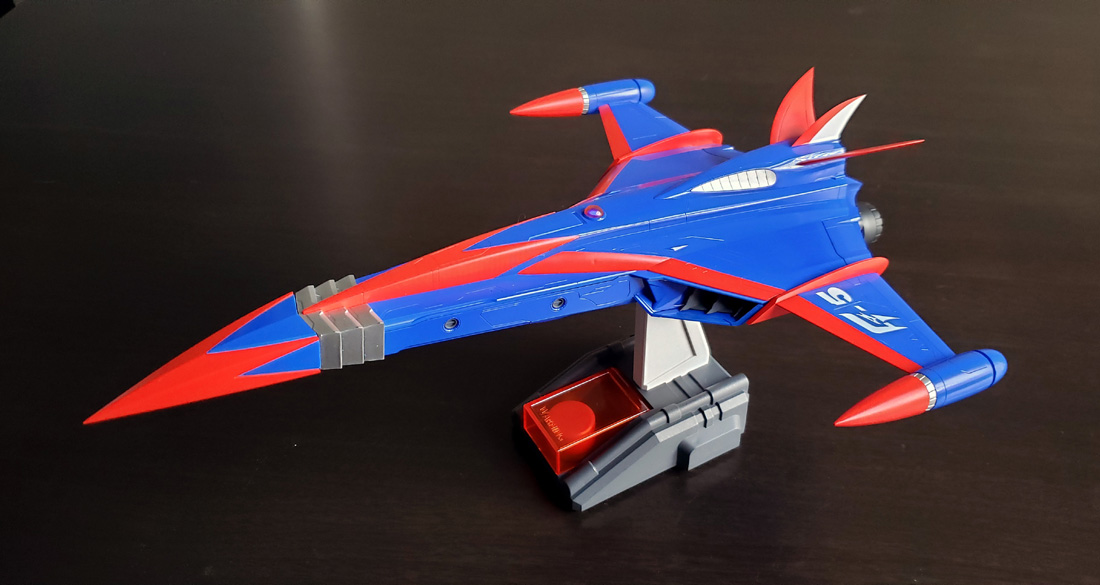 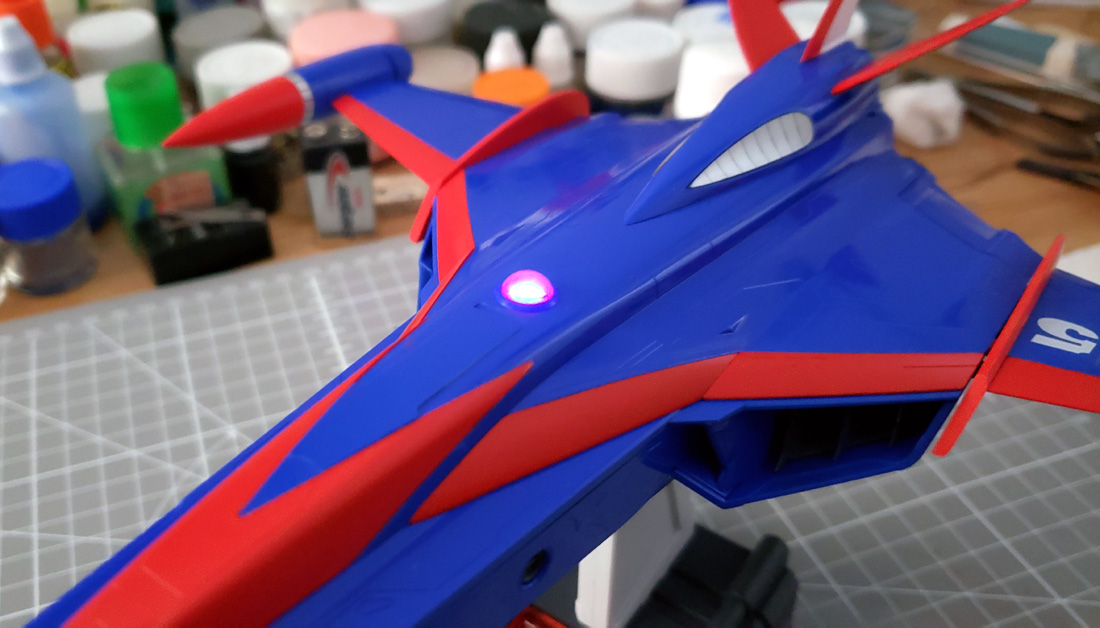 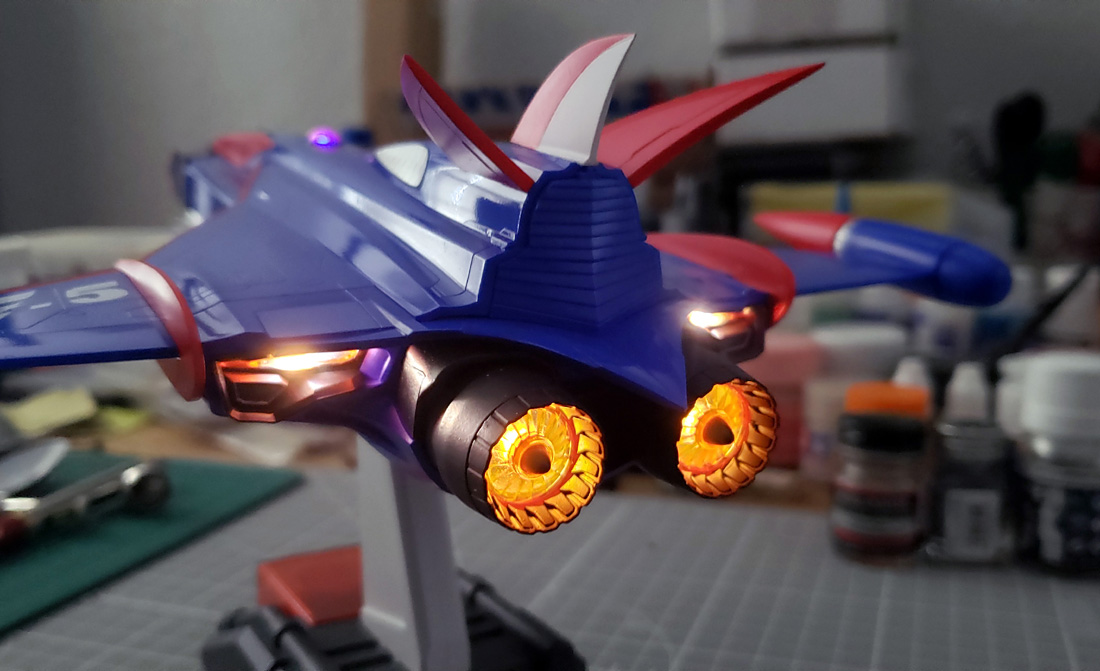 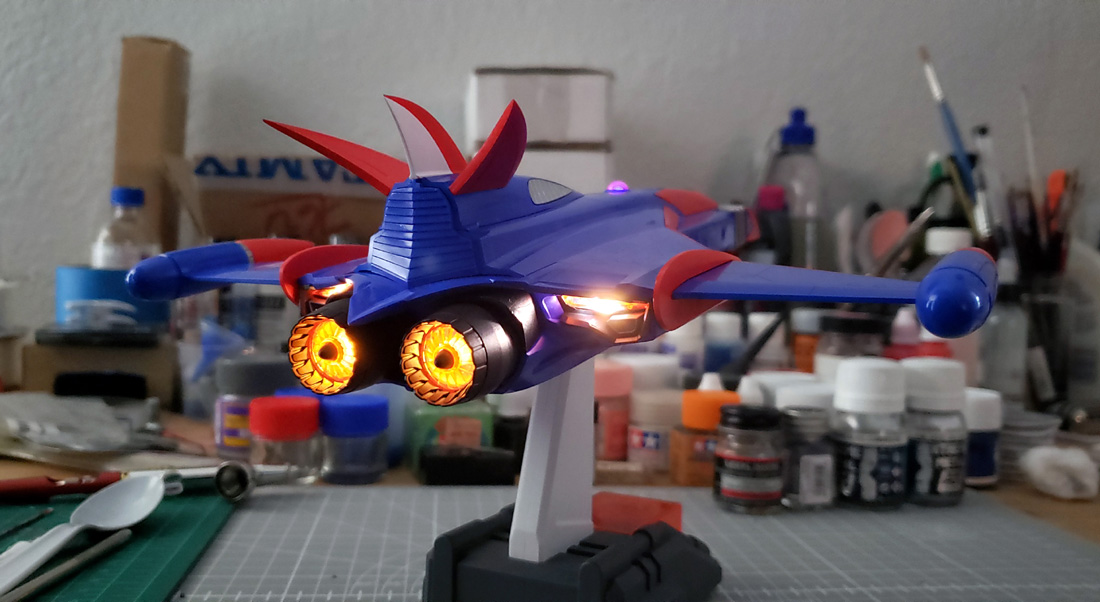 And a little 360 view for those in the back.