A long overdue thank you to a talented guy...

We all collect or create props here, and we often never get to hear how they might be used in the "real world". It isn't very often that a prop becomes an extension of yourself, less so almost a member of the family. I drive a Star Wars art car daily, use a lightsaber on most weekends, but nothing prepared me for the prop that would change everything, launched five years ago today, and I owe Phil -"Cyberman"- a debt of gratitude.

In early 2007, on the heels of our 501st appearance in the Rose Parade, I ordered and received one of the early foamed-latex versions of a Yoda head from Phil. He'd rushed it out to me from the UK to Los Angeles so I could create a puppet in time to give science lectures at the opening of California Science Center's run of the "Star Wars: Where Science Meets Imagination" exhibit. I was an old-school puppeteer and had long been able to perform Yoda's voice; I hoped to one day have a puppet to cement the performance, and the exhibit was the perfect excuse. There was even had a touring Yoda in the exhibit I could use for reference.

A scant and busy two weeks later, Yoda was ready for his debut. Appearing at the Center's fundraising gala, we worked the event -all adults- as I learned the ins and outs of my puppet compadre and the way he could interact with the crowd. Before I knew it we were a huge hit, being dragged onstage to sing "I Will Survive" with the band, taking more photos than I could count, hearing stories from everyone about how Star Wars changed their lives. I always get a warm welcome as "Obi-Wan", but this was something very different.

It hasn't stopped since. That year alone I did 160 events- 145 of them with Yoda. Kid's hospitals, schools, libraries, military bases, charity fundraisers, community support events. Some alone, many with the 501st and Rebel Legions. I was so busy that my RPF account lapsed from lack of signing in!

We discovered that, as a big latex glove, Yoda could interact with terminal kids in isolation wards and other areas the staff were reluctant to let people in. We greeted injured soldiers upon their return from Iraq and Afghanistan, and their families while they were deployed or, in some cases, weren't ever coming home. We held Jedi training classes for cancer survivors, saber building workshops for Boys and Girls Clubs and Scouts, and participated in parties, 5k walks, weddings and even funerals. By my count, we've personally met over a million people, many of them giving "high threes" to Yoda in greeting.

Yoda has had dealings with Mission Control at NASA's Space Center Houston and the International Space Station, and lectured at Jet Propulsion Laboratory and many other science facilities. Visits to Legoland, Disney Parks and Studios, ILM, Cartoon Network and even Skywalker Ranch. Sporting events like the Super Bowl, Pro Bowl, and NBA All Star games. He even had a bit part in the movie "Fanboys", being held hostage by Will Forte, and celebs from all walks of life have requested visits and photos with the Jedi Master. He's my carry-on luggage when I travel by plane, sometimes in a seat and sometimes in the overhead compartment, and I have some great tales of interactions with the crew and passengers- both lovers and haters alike. I get pulled over on the road by the police, who want photos when he's "riding shotgun" with me to events.

Five years is incredible for a latex creation to last, and I'm amazed I've been able to keep him going so long; it looks like I'm retiring Yoda just in time for his replacement to be issued. The new sculpt looks amazing, but I have to say I'm going to miss this one a lot, with his own idiosyncrasies and unique look. No one ever questioned that he wasn't Yoda, even if they acknowledged he was only a puppet, and he's made friends around the world.

So I just wanted to say thanks, Phil, for a really amazing five years and let you know how much joy your creation has spread as I take him around the US performing service in the name of Star Wars. I figure you've been a prominent partner in this; It's been my privilege to perform through your carefully-crafted sculpt, and I can't wait to get to work on the new one and keep on going for another five years.

And I wanted the folks here on the board to know how a simple prop can really make a difference in the world. We're used to hearing stories of the 501st and Rebel Legion doing good things, but sometimes the inanimate objects have a hand in it.

Or, in the case of a puppet, I guess we have our hand in after all... :lol

Getting ready to appear in "Fanboys":

Flying Southwest Airlines on our way to NASA: 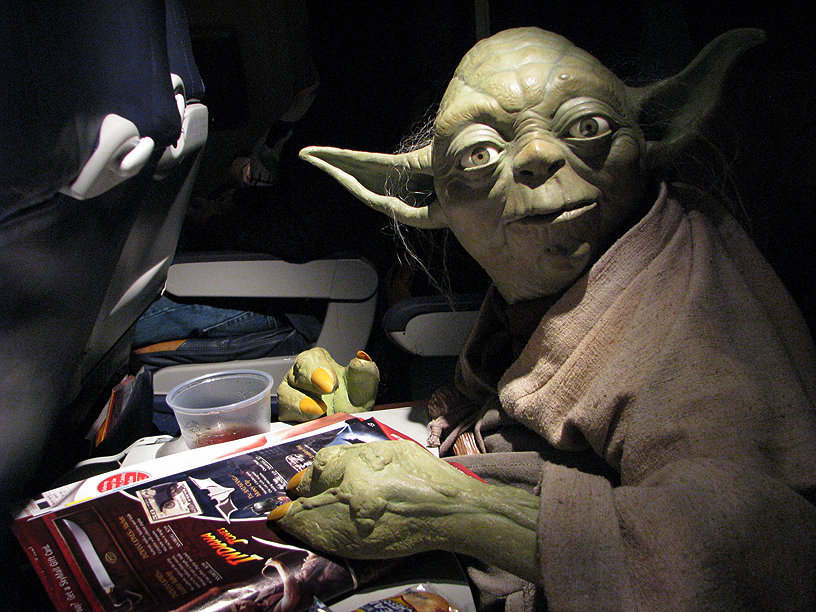 Yoda is nonplussed on the "Tower of Terror" ride at DisneyWorld:

RPF PREMIUM MEMBER
Makes me very happy to read this and see that there are people out there using our hobby to spread so much joy.

RPF PREMIUM MEMBER
What a great story! Kudos not only to a great puppet, but you for doing everything you have done with it. Brought joy to many lives, you have

after reading your post, i realized a thank you was in order...

for someone to volunteer for so much in the name of star wars and the grand master....i commend you.

What a great read, thanks for posting.

What’s that prop worth if it sold today?