Well this took way longer than expected, sorry about that. not an easy or quick paint job.

i think i found accurate colours for the eye sockets and cheeks. humbrol matt wine no. 73 and humbrol matt ochre no. 83. i did several tests and photos with and without flash, i'm confident these are a close match with the ref i have.

i have fake power wires up to the head (blue n brown) and even an inventory sticker i found (not accurate and can be removed) and put it on the head base plate for the hell of it. lights are powered by a 3v twin AA battery pack which is inside the head.

the paint job is rough.....because the real one is rough,

there are so many little things that go completely unnoticed, like all the silver scratches , i though some of those were touch ups done at a later date but no they are on screen, you just have to look. 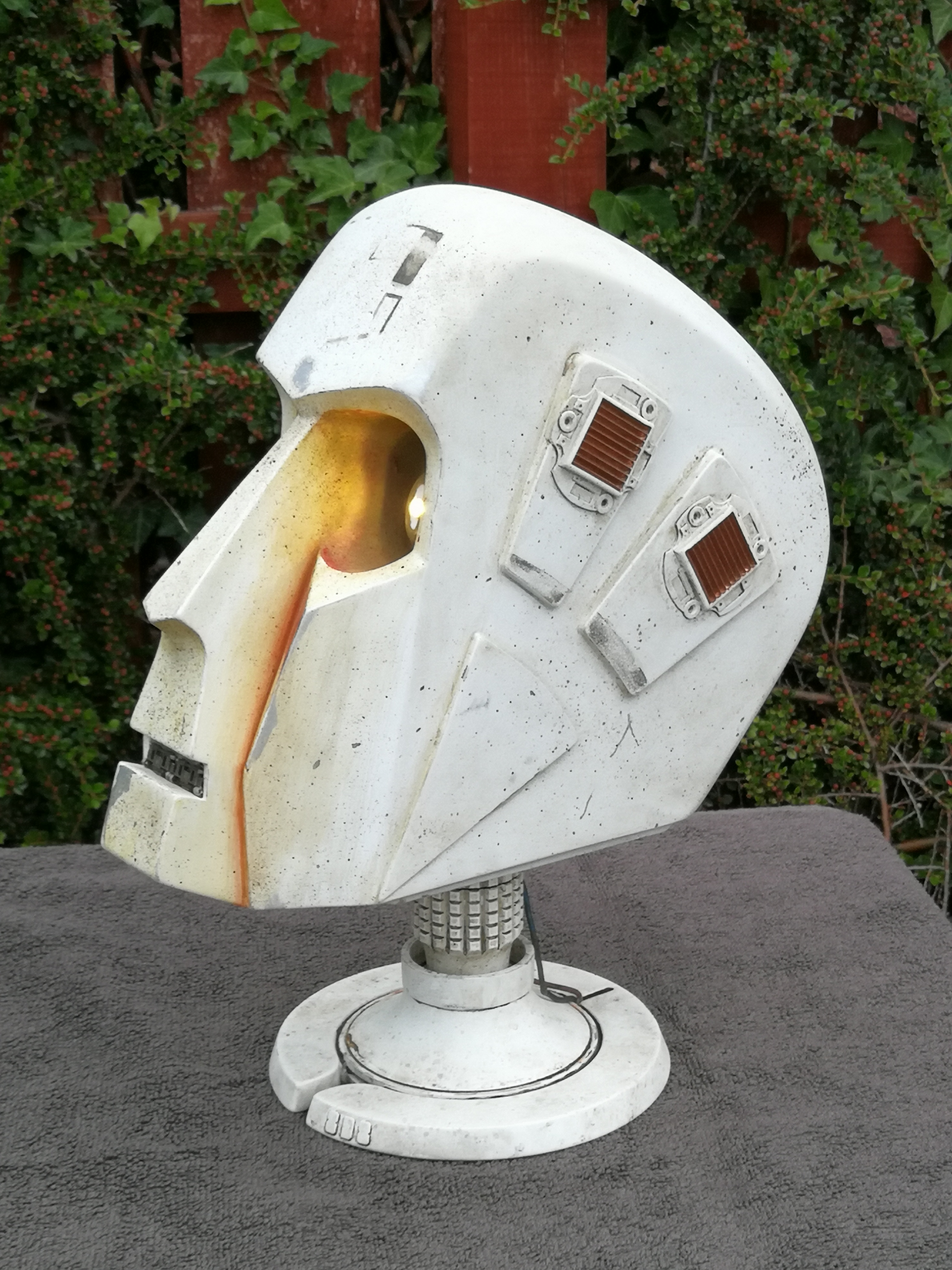 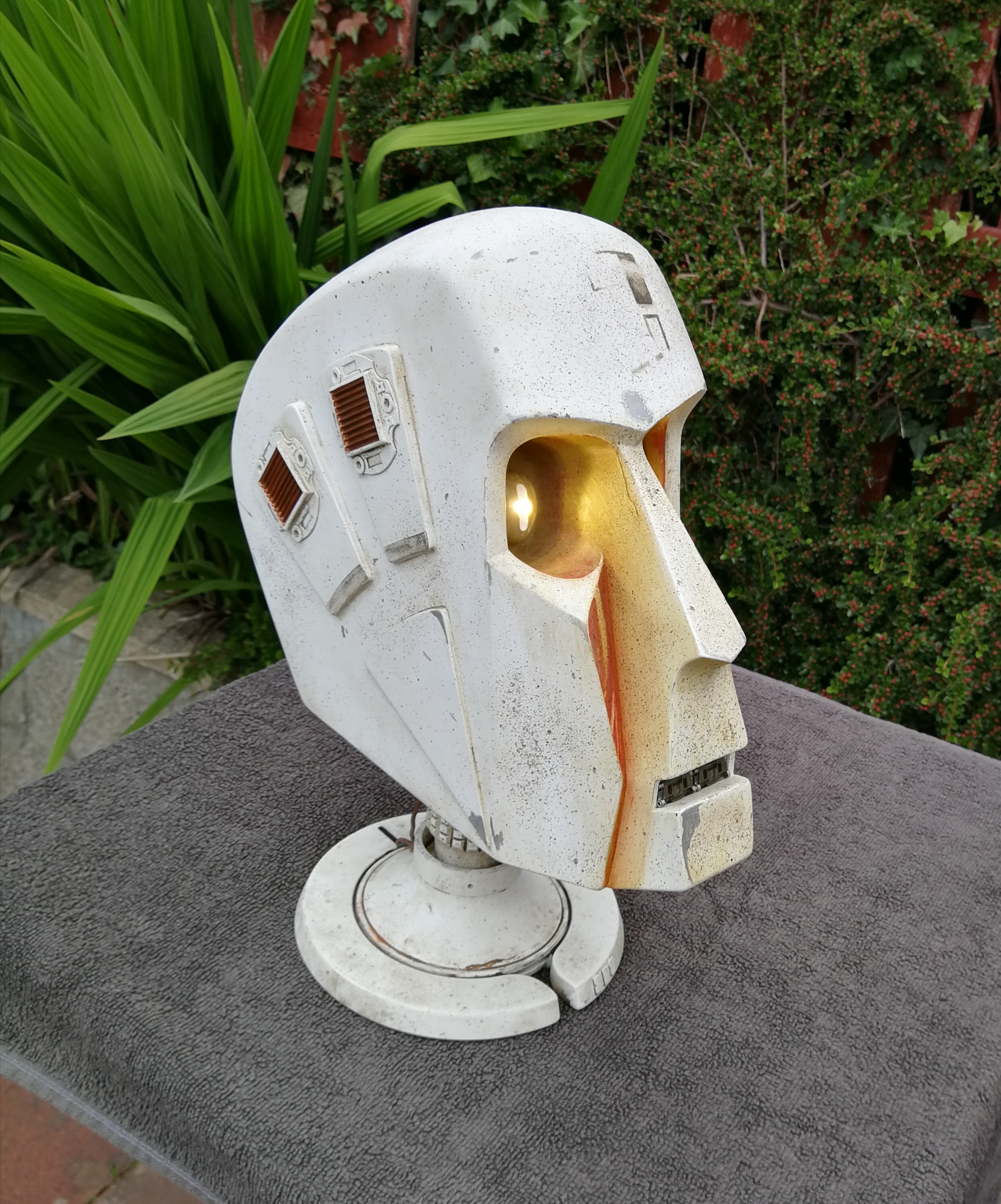 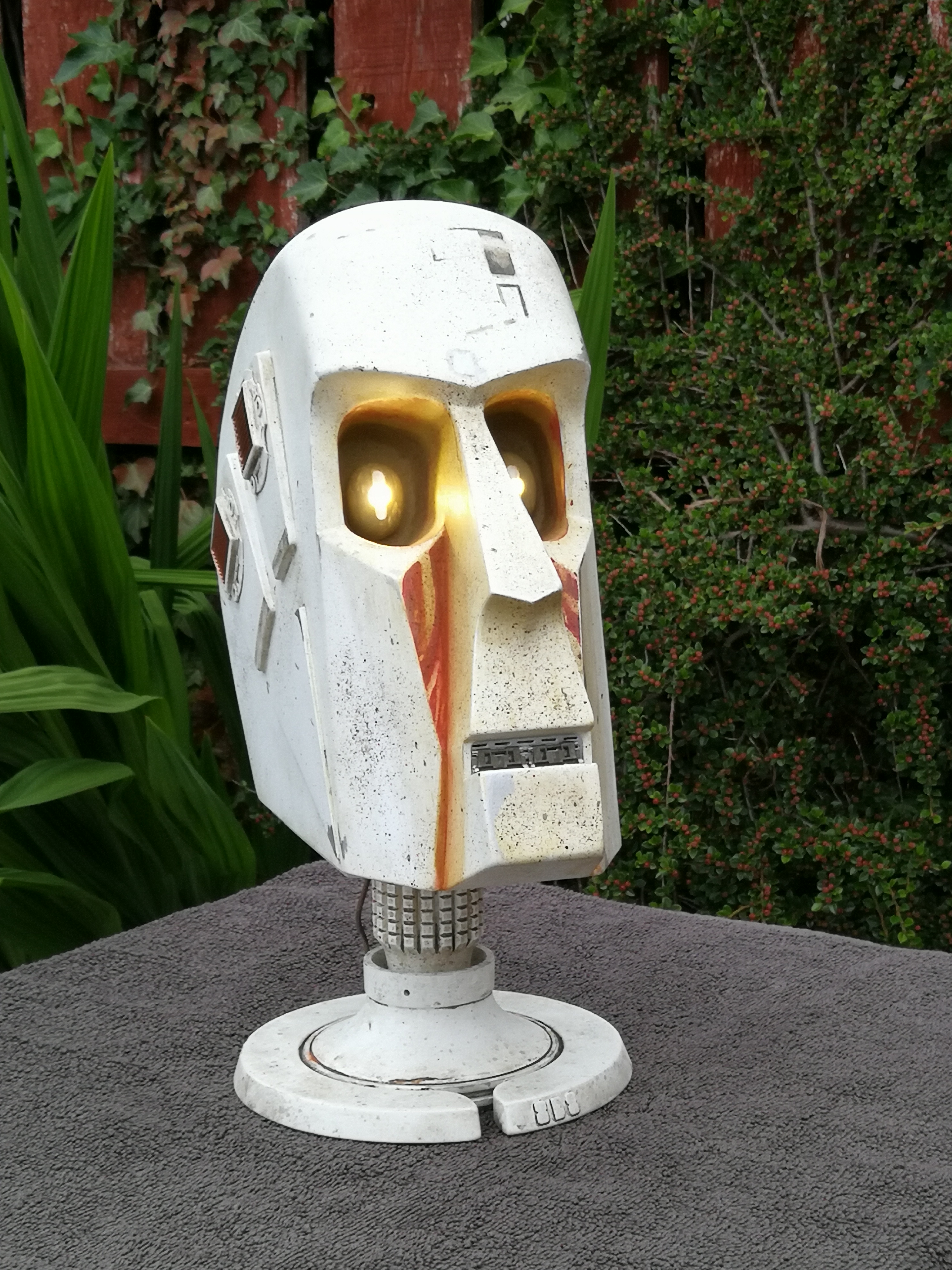 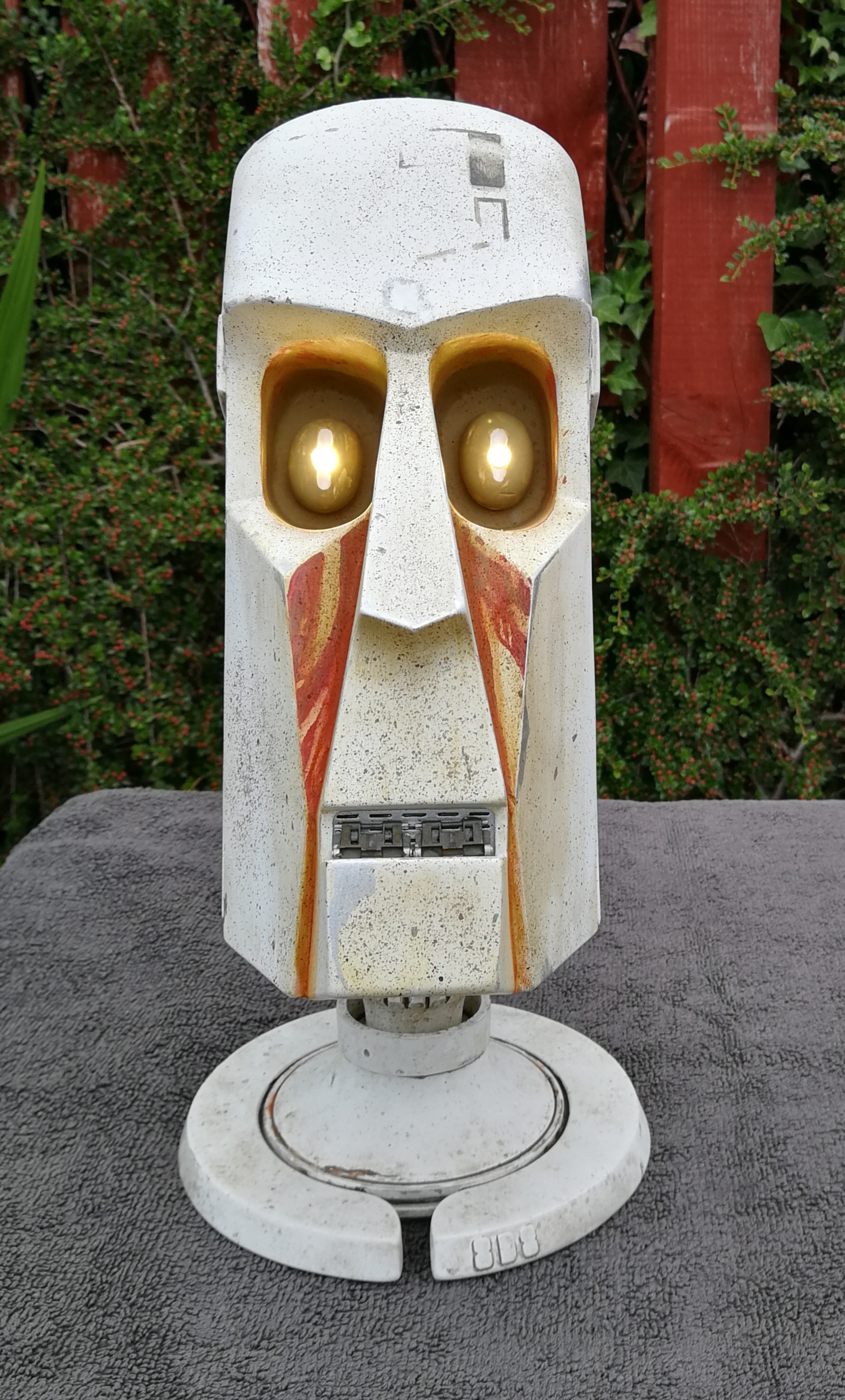 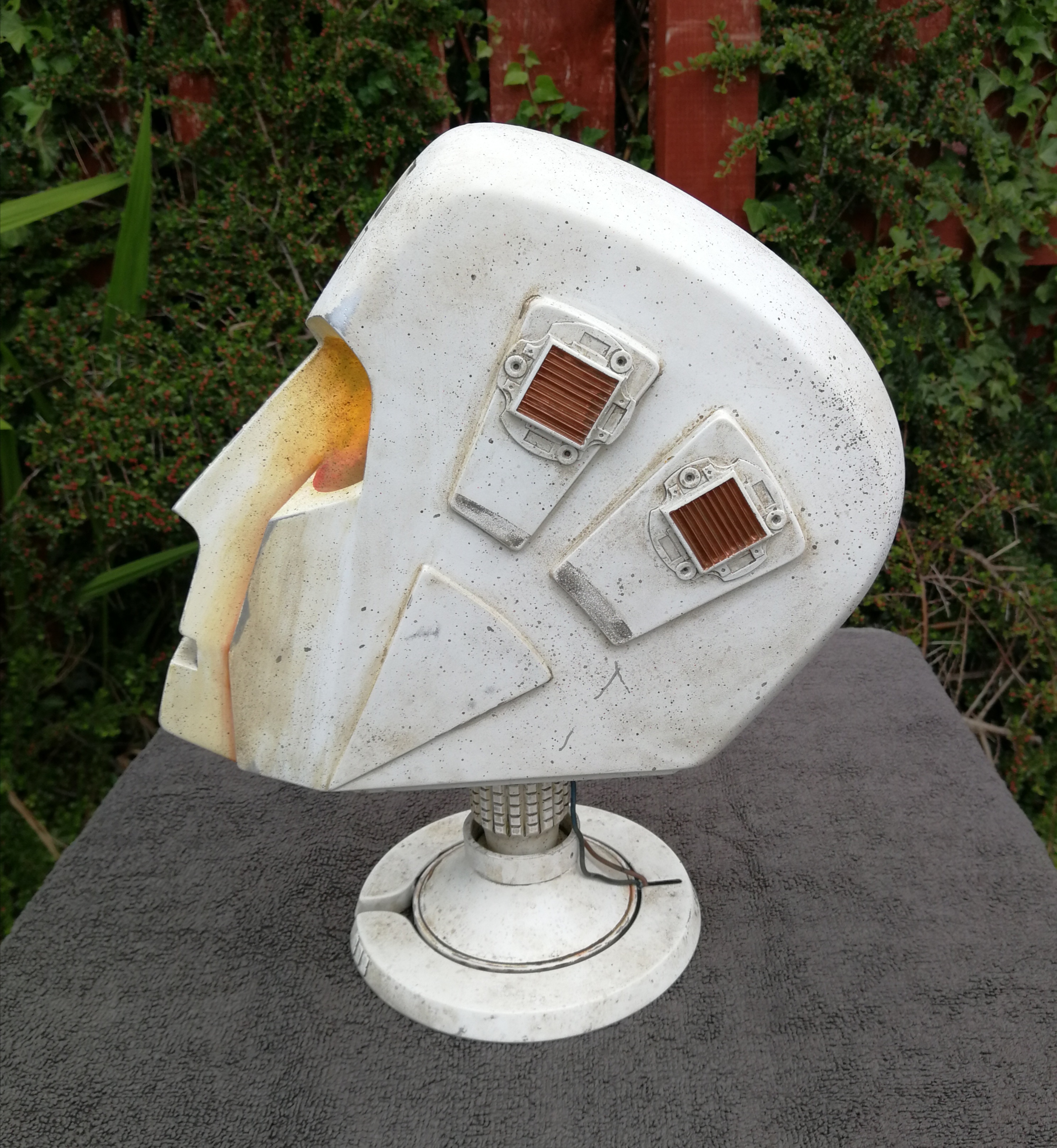 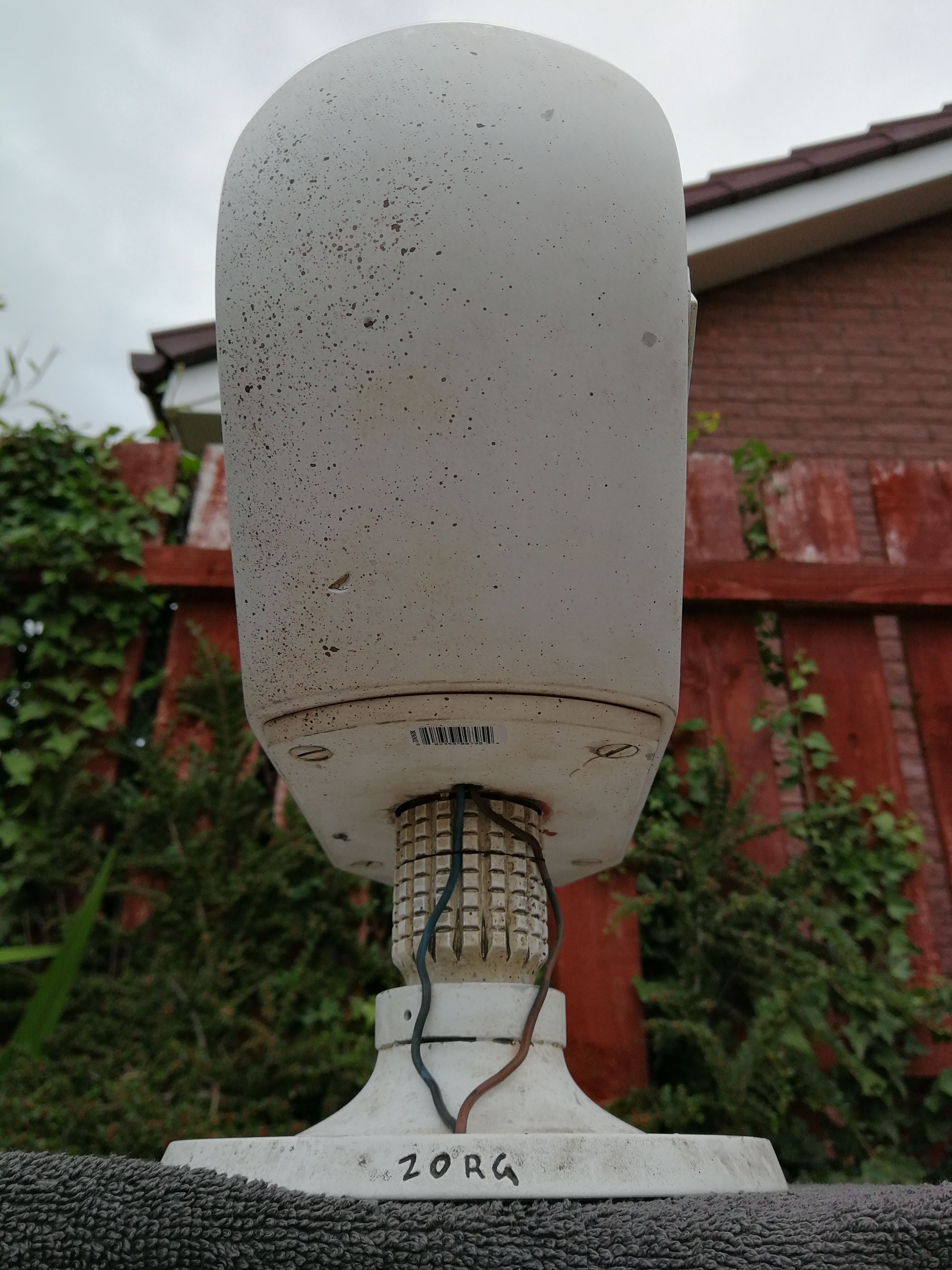 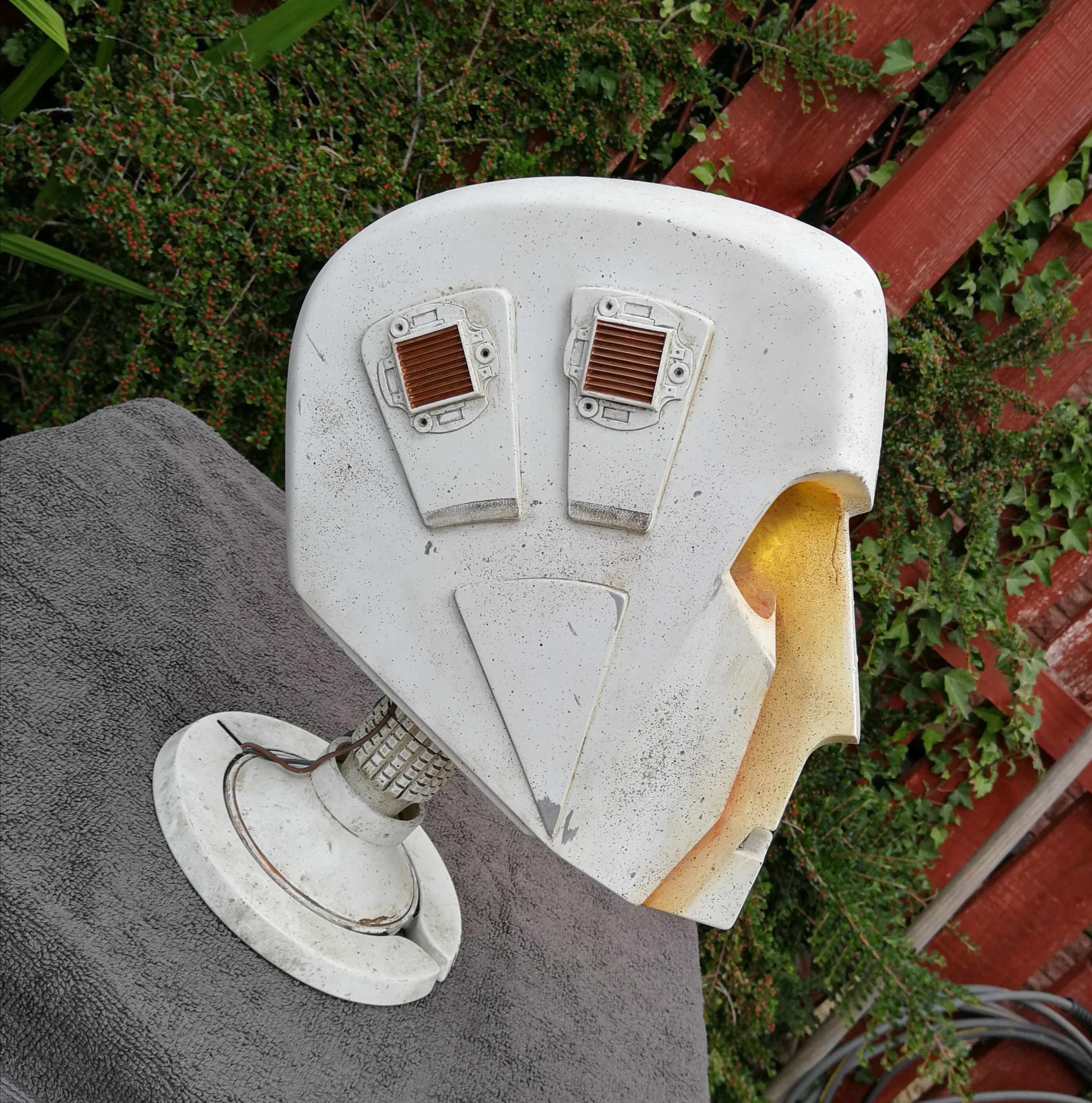 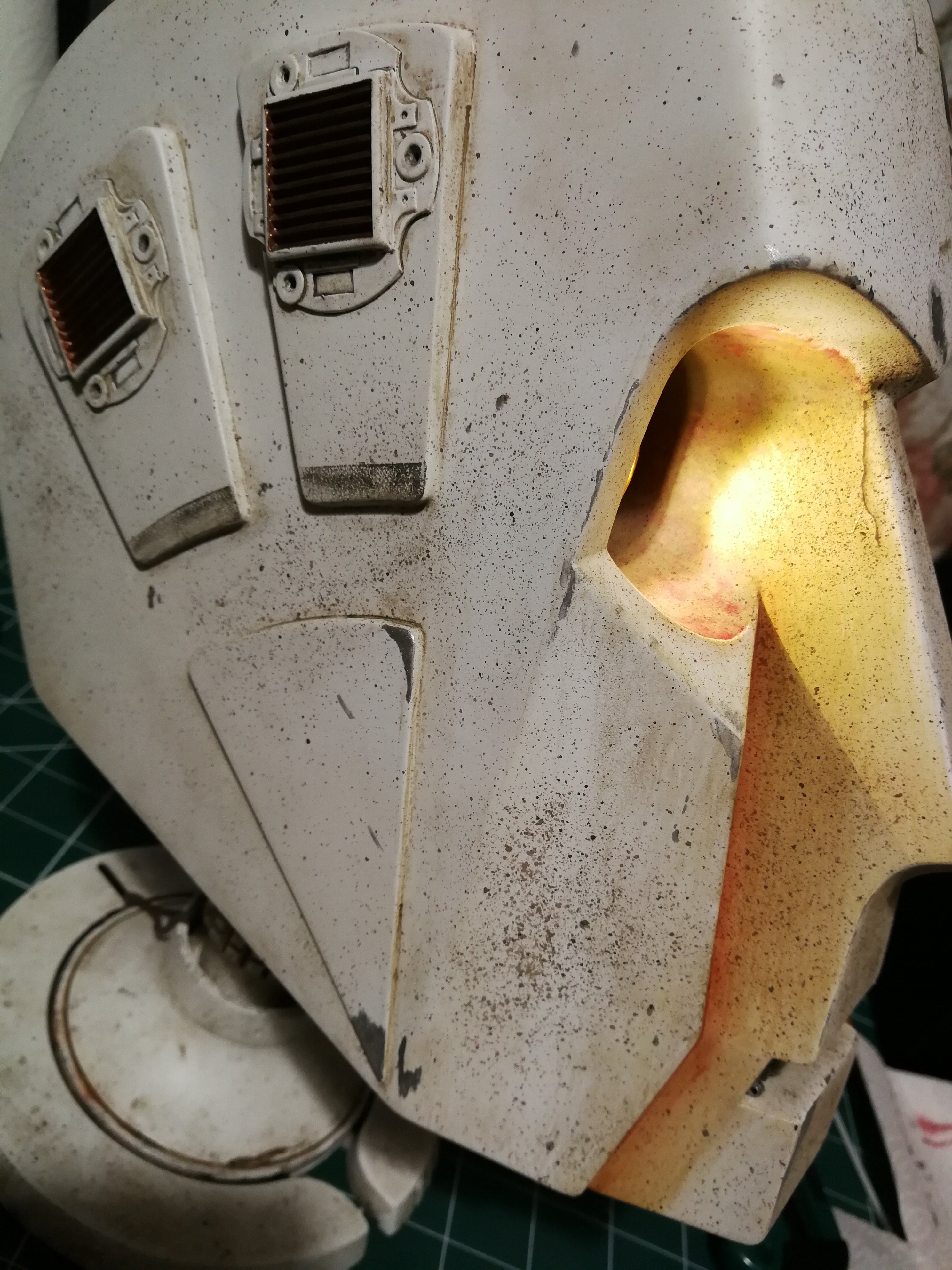 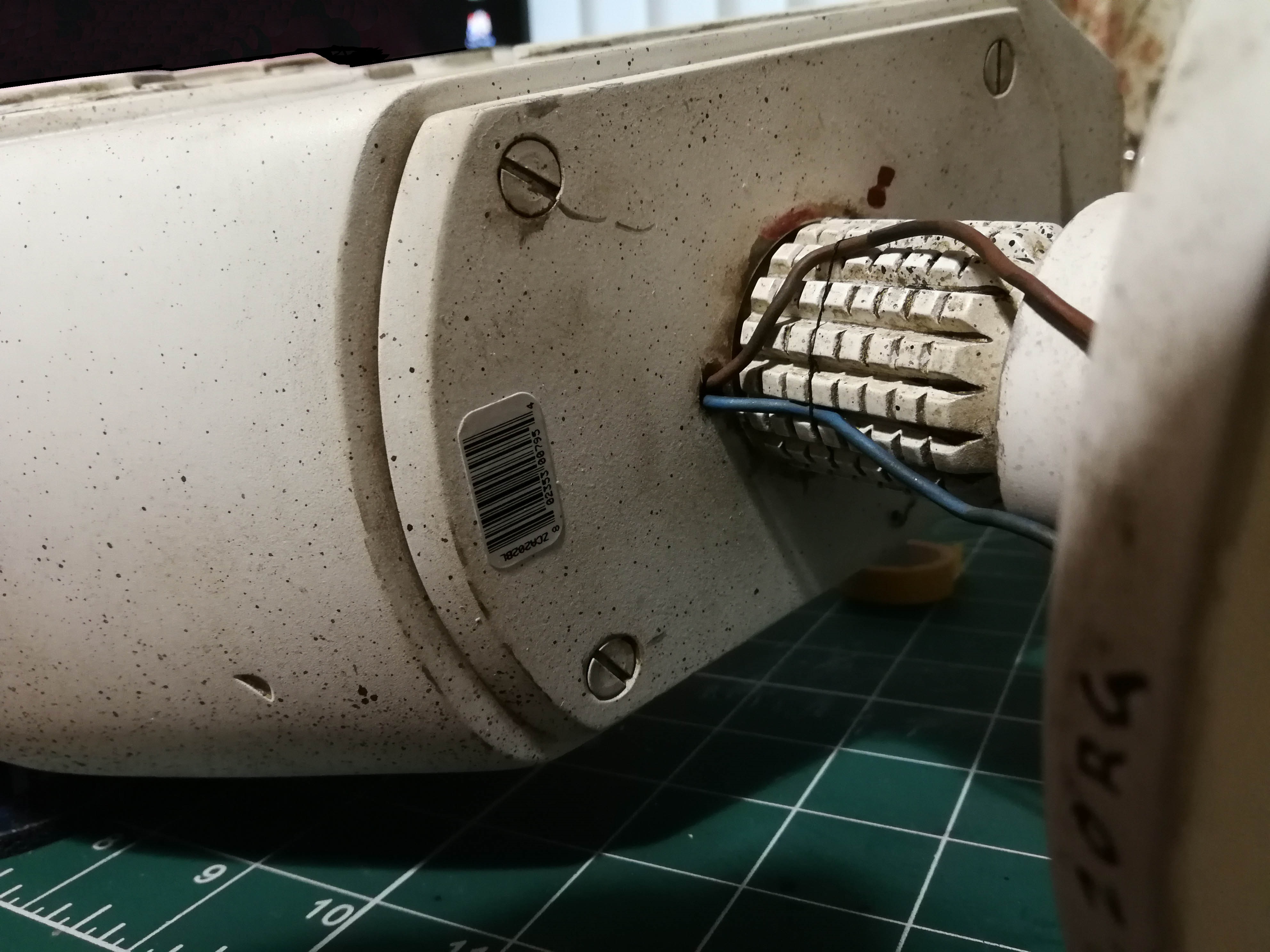 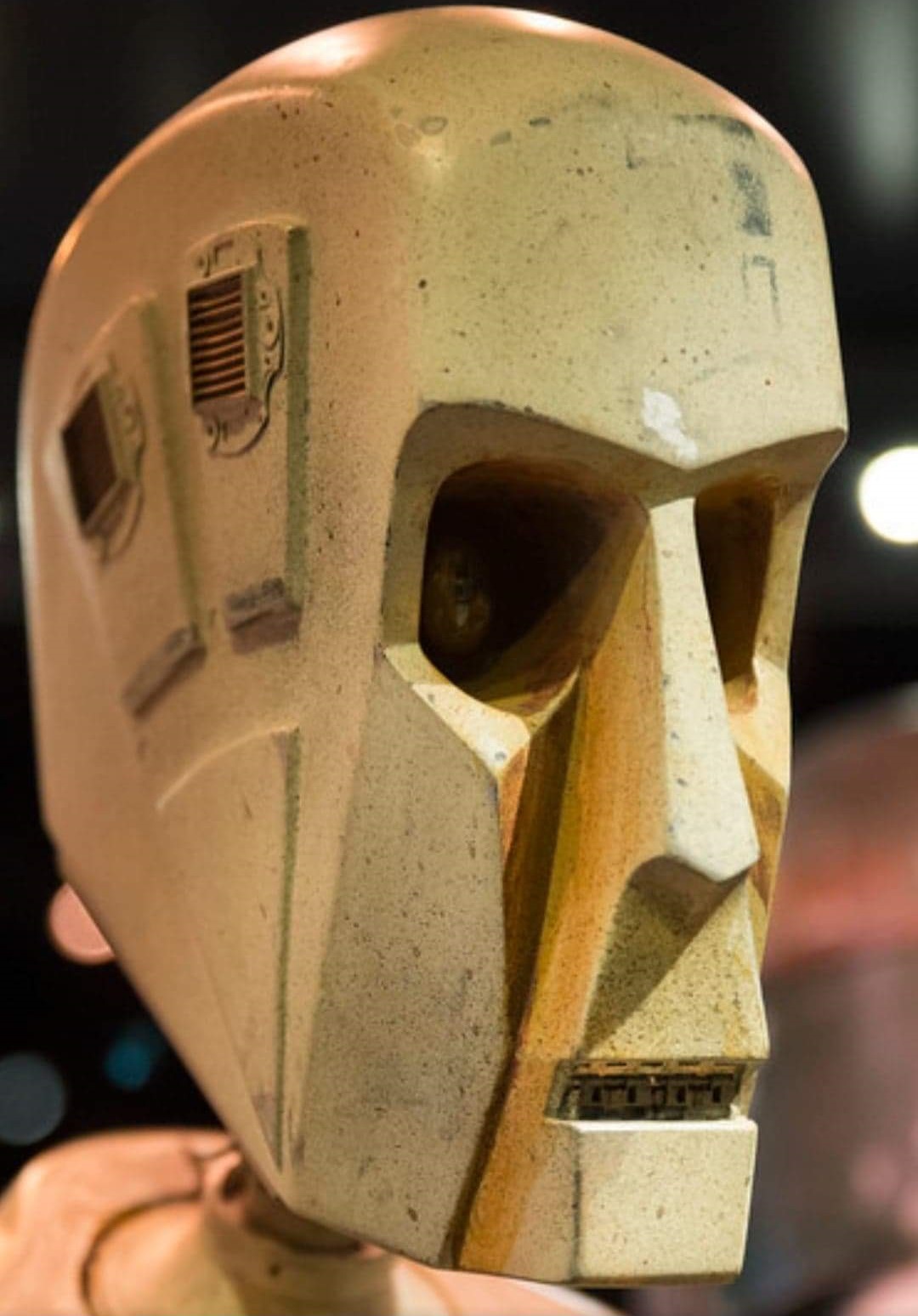 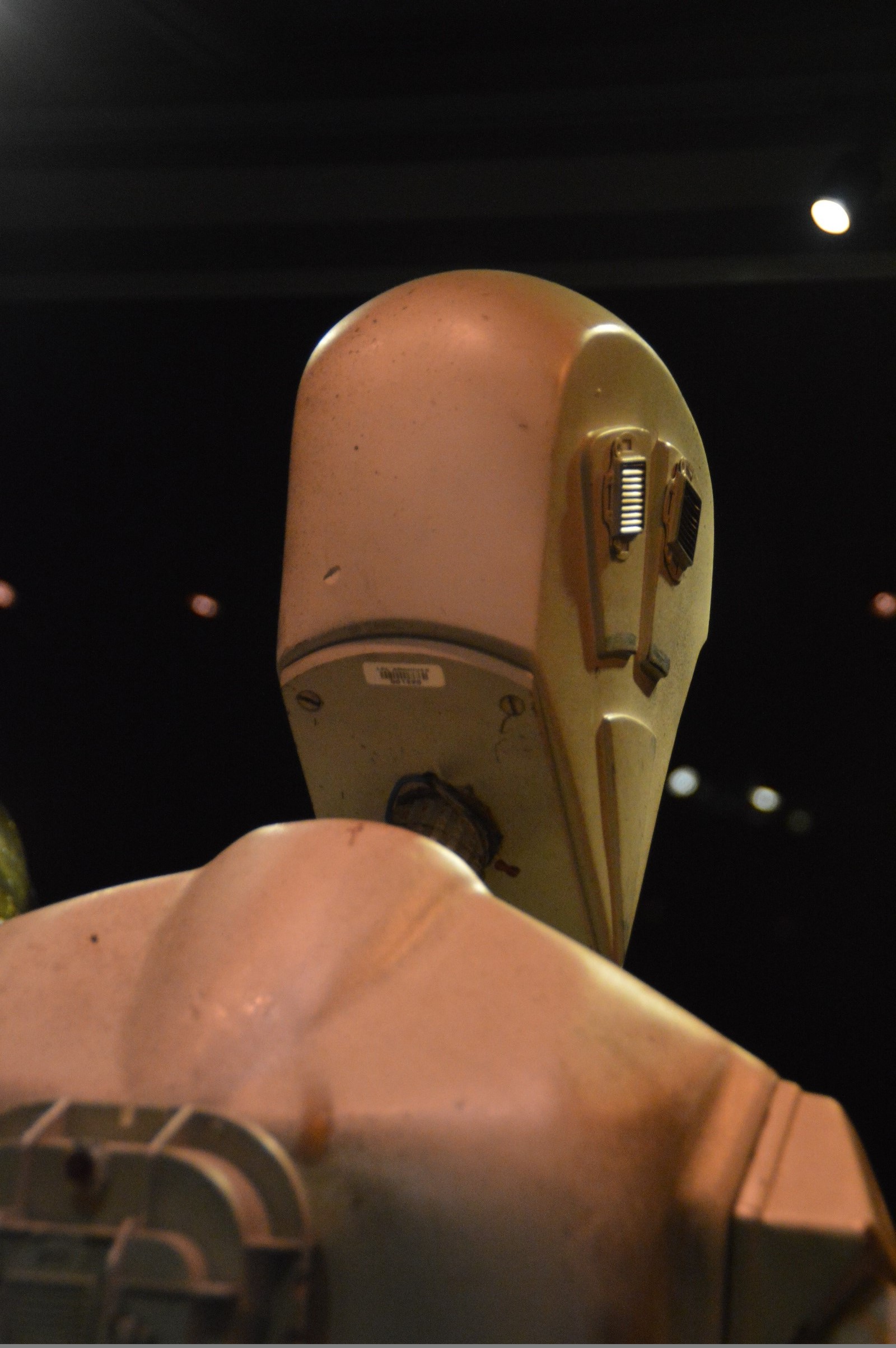 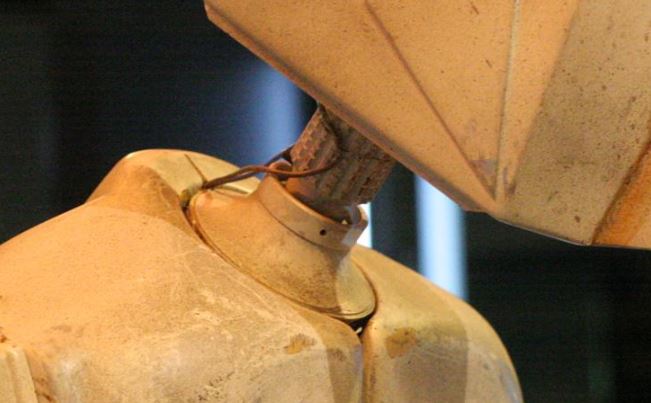 Hello peeps, It's a new year and a new decade so i better get a new droid head done, it's a re deux of one i had done many years ago but a completely new sculpt. i have sufficient new reference to realistically get pretty close to the real one in my opinion. i won't do another 8-d-8 ,this is...

can i put my feet up now?

Very cool. Now you just have to make the rest of it.

newmagrathea said:
Very cool. Now you just have to make the rest of it.
Click to expand...

First, I read the title too fast before I looked at the pictures and thought "man, BB-8 looks weird."
Second, it looks awesome!
Third, that face will haunt my nightmares for years to come. Seriously. Don't have that sucker lit up if you're shuffling to the bathroom at night or something.

Man that looks great! You nailed it! The details are so crisp, especially the dynodes. & your paint job & weather are spot on.

Just curious, what is the barcode on your sculpt for?

Kwc271 said:
Just curious, what is the barcode on your sculpt for?
Click to expand...

Real answer it's on the original apparently. I didn't know that.

Kwc271 said:
Just curious, what is the barcode on your sculpt for?
Click to expand...

You can see it in the above tour photo, it will be just a lucasfilm inventory thing i would imagine, or jabba used to scan his droids

Yeah, I know it is on the lucasfilm prop for inventory control, I was just wondering why it was on the OP’s prop.

Love it! The paint job looks so awesome.

It's okay, I have your address tattooed on the sole of my foot remember! #crystalmeth

(sniff) It's so beautiful!

RPF PREMIUM MEMBER
This needs a bump now that 8D8 is back! Great work. Hoping to see some more 8D8 builds... might have to do one myself at some point.

RPF PREMIUM MEMBER
Yes it’s great to see him back on Book of Boba Fett. Really love the way they animate him.

Weird ROTS Vader helmet detail no one seems to notice or know what its for.

Favorite display accessories in your collection