I saw that there are now commercial Halo 3 MC suits on ebay and online retailers.
Has anyone seen these up close? Would they be a good base to add too?

i've never seen one but i doubt it would be worth anything close to that price. you'll probably find a lot more info about it over at the 405th forums though.

I agree with Jack, the 405th would be a good place to ask about those since they're dedicated to Halo costuming and there are several members there who are very knowledgeable when it comes to commercial costumes. I've rarely if ever relied on commercial costumes because unless they're incredibly expensive (in the range of several thousand dollars like the costumes of the Halo Reach "Deliver Hope" trailer) then they are more than likely inaccurate to some degree. Now the degree of inaccuracy will vary depending on the maker. As for the one you posted a link to, it looks to me like it is inaccurate on several counts and I think I can safely say I've seen much more screen-accurate costumes made by members both on here and on the 405th. Now I wouldn't know for sure about that costume (and I don't really think anyone can) unless they see it up close while it is on a person that it fits well on. It looks like the image could be off of a mannequin which is why it doesn't appear to fit properly or look as accurate as it would if it were being worn on someone whom fit in it nicely. The only other thing is the material it is made out of. It looks like cheap thin plastic and I've never tried to add onto something like that with Bondo or some other form of filler to make it look more accurate so unless someone has ever tried it, there's no way of knowing if it would be worth it to buy one and add detailing with Bondo or some other filler.

Hope I was able to help you joeranger.
R

seen this costume in person at my local spirit costume store.. they had it on display last week.. i should have taken pics.. it isnt worth near that money the helmet and armor are all thin abs plastic that bends slightly under pressure the helmet tho a little stiffer was very generic in looks.. i didnt take it off the maniquin but everythinglooked to be held on as a one piece suit basically step in slide it up slap on a helmet
T

Member of the RPF here and Masterchief Costumer (not a good one, mind you)

That costume is made by rubies, and it's crap. for $600 you could make your own(mine cost less than $600 to make) but it takes several months, lots of effort, and some basic skills. If you dont have the time or skills, A good fan made kit is going to cost you.

No need to scare him off

This is the $150, done in 3 weeks version made from pep/rondo I did for my nephew last year: 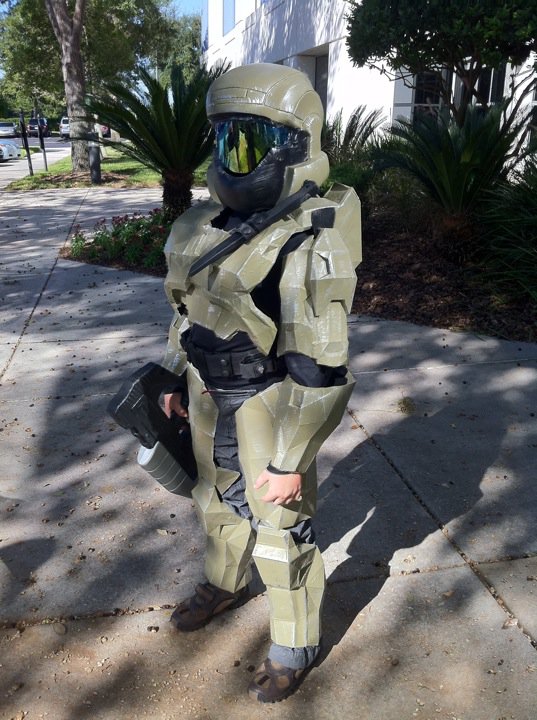 If I had another 3 weeks I could have rounded out all of those hard angles with bondo and gotten a much closer look to what thefreeman has. Halloween wasn't going to wait for me, though.

the rubies chief suits in my opinion are not to great. i really think you would be better off finding something on the 405th.com.. if you are really serious about getting one i would talk with blue realm

could the ruby version be backed with something? could the apint job be better? if applying a backing does stiffen it up, could just replacing the helmet do it wonders? does it come in different sizes?


these are the questions that now need to be answered.

If you have to do all that to the Rubies version, is it even worth spending that much money on to start with?
A

time is money. money is time. if you have time, you dont need so much money. if you have no time, now there is a option to use money to speed things up. i cant see this option as bad for existing now.

ive seen some excellent pepkura halo costumes.. if you take your time with it and make sure everything is smooth and looks good..

i have seen this before...its exactly what it looks like thin thin plastic or vinyl whatever its called. if it was something like 100-200 range itd be a good base or at least reinforce it

I agree with everyone else. I also made a Master Chief 2 years ago, I spent between $400-$500 (lots of experimenting adds up) and I ended up with a suit that I feel looks way better than the Rubies. It's proportion's don't look right IMO. Not to jump on the foam bandwagon, but I think you could crank out a great foam suit if you dedicate yourself. I do recommend a trip to 405th.com
Good luck!