Community Staff
For a short time, I worked on a Charlie Prince costume. Sadly, I don't have anything to show for it. I am in the process of closing a number of personal websites, one of which documented that process. In order to not lose information, I am posting those findings here. I am not sure it will necessarily help anyone, but who knows.

Charlie Prince’s Hat from 3:10 to Yuma - Originally posted at playingforblood.com on January 28, 2008 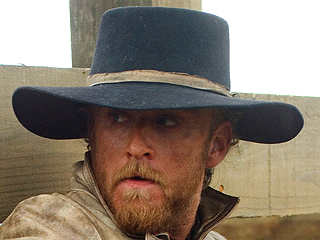 Been doing a bit of research on 3:10 to Yuma and pretty quickly found that the hats for the movie were made by Baron Hats. I contacted them regarding the Charlie Prince hat and here was their response:
Yes, we know the "Ben Foster" (Charlie Prince) hat very well, since we made the original, along with most of the other hats for the motion picture.

While I will probably have them make my hat, the price seems exceedingly high when looking at the prices of their other hats. I am not sure if it is because 3:10 to Yuma is considered a hot item right now or what as the Charlie hat does not seem particularly complicated. Perhaps I will just wait to see if they post the hat at this price on their site...

If you are interested in purchasing a hat from Baron Hats, you can reach them at:

How were you brought on board for 3:10 to Yuma?

3:10 to Yuma was made after The Assassination of Jesse James. Thell Reed was armorer on both Jesse James and 3:10 to Yuma. As Thell was aware of my work on Jesse James, he approached me in regard to designing the rigs for 3:10 to Yuma.

What were your contributions to 3:10 to Yuma?

I designed and built the iconic rigs for Ben Wade, played by Russell Crowe, Charlie Prince, played by Ben Foster, and Campos, played by Rio Alexander. I also was commissioned to create more generic rig designs to outfit the outlaw band and posse.

How do you come up with a design?

The first major consideration is the time period in which the movie is to take place and what technology and styles were popular at that time. This helps ensure the rigs are ‘period correct.’

The second major consideration is the requirements of the production. In the case of 3:10, the armorer was looking for period-correct rigs that could be used like a modern-day fast draw holster. Additionally, the rigs had to be colored in such a way that the dye would not rub off on the actors' clothing.

There are also other considerations such as requests from the actors. For example, Rusell Crowe, at one point, wanted two crossing belts for Ben Wade. However, Thell Reed had used crossing belts on Curly Bill Brocious, played by Powers Booth, in Tombstone and expressed great concern due to the issues Booth had in keeping the belts situated correctly. Thell stated that he had to readjust Booth’s belts for every shot because they kept falling down. Based on Rusell Crowe’s requests and Thell Reed experience, I created a double belt rig in which the belts interlocked, creating a single unit that wouldn’t fall down as two individual belts would have done. Unfortunately, this belt wasn’t used by Crowe as the director ultimately decided that it did not fit Ben Wade’s character. He instead decided that Ben was deadly enough that he only needed a single gun while the remainder of his posse required two guns to be as deadly as he was. [Note: a similar decision was made for the character Johnny Ringo from Tombstone, as he was initially slated to carry two guns.]

Please walk me through the process in which a rig goes from an idea to the final piece used in the film?

I first make a template and from that create a prototype that is then shipped to the armorer. The prototype is examined and revisions are noted. I then use these revisions to create the final pieces seen in the film. Sometimes there are numerous revisions and holsters get swapped from character to character or even from film to film!

How many rigs were made for Crowe and Foster?

For Ben Foster, we made 3 belts in total. One was the original prototype belt that I still have. The second belt was given to Ben Foster. The third belt was sold on eBay after filming.

What was your inspiration for the Charlie Prince rig?

Charlie’s rig was inspired by the character as described to me by Thell Reed. In my mind, I ‘type cast’ Charlie as someone who is arrogant and conceited. He would be interested in appearance and has no regard for human life. Based on this assessment of Charlie’s character, I created a prototype that included a flaming red lining in the holsters as well the red ‘Flames of Hell’ stitching outside the lining. I also added silver spots and a detailed silver buckle to represent Charlie’s arrogance and pride. Finally, I gave the billet a ‘coffin’ style end.

How did the final design of Charlie’s rig change from the prototype?

The prototype holsters had a very common, period-correct, treatment for the throat. During the civil war, many holsters had a flap over them to protect the old ball and cap style weapons. After the war, it became common to simply cut off the flap as it greatly impeded the speed at with a shooter could draw his weapon and cartridge-based weapons weren’t as delicate as their predecessors. When the flap is removed, there is often an arc of material left at the back of the holster. This became so prevalent that holster makers began to make new holsters with the arc even though it was only a remnant of the cutoff flap and served no useful purpose. I added this arc to the prototype rig because it showed off the red lining of the holster through the trigger guard. However, Thell, the armorer, felt the arched back impeded Ben Foster’s ability to draw. Ultimately the arches were removed even though they were period correct. Also, the holsters on the final rig were made ‘baggier’ than the holster on the prototype so Ben could holster his pistols with less resistance. Finally, for safety reasons, a hammer thong was added so the guns wouldn’t fall out of the holsters, especially when the actors were on horseback. Hammer thongs weren’t common during the period of the film so I designed the thongs so they could be easily hidden for closeup shots to maintain a period-correct look.

Yes, I did. Jon Watsabaugh, an award-winning saddle maker helped make many of the rigs. In fact, while the designs were mine, Jon actually manufactured more of the rigs for the secondary actors than I did! I provided Jon with patterns and leather and he built them.

Thanks to Will for sharing this info!!! If you are interested in having Will make a rig for you, please check out his website: Will Ghormley – Maker 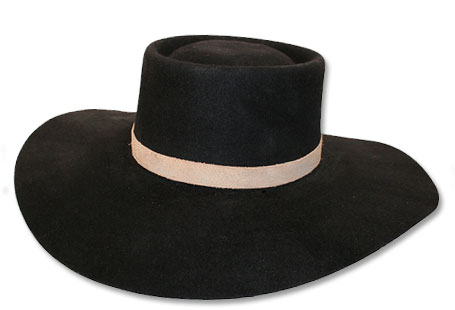 Baron Hats, who made the hats for 3:10 to Yuma now have a copy of Charlie Prince’s hat available for purchase. They are calling it “The Trigger man” and their prices are as follows:
$510 for a 100% Western Weight Fur Felt

As I stated before their prices seem very high to me considering Tom Hirt (maker of a number of the hats used in Tombstone) created a Ringo Hat (which in my opinion is a more complex hat) for $430. Still, if you want it from the original makers these are the guys to get it from.

You can purchase their hat from the following link: Baron Hats’ “Trigger Man” Hat

Charlie Prince Jacket Buttons from 3:10 to Yuma - Originally posted at playingforblood.com on January 10, 2011

This is a pretty small update but I thought it was worth noting as I haven’t seen anyone else positively ID the buttons on Charlie Prince’s jacket.

While I am not 100% sure of the size, the button on Charlie’s jacket appear to be Royal Army Pay Corps (RAPC) buttons which include a lion over a crown over a scroll which reads “Fide et Fiducia” which means “By fidelity and confidence” or ” trust and be trusted” which is seems fittingly ironic.

Anyway, you can find these buttons and knockoffs all over the net, from eBay to reenactment sites to private collectors.

UPDATE: A friend recently pointed out that there are two main variations of this button; a “king’s crown” (1928-1952) version and a “queen’s crown (post-1953) version. Charlie’s jacket has the king’s crown version of the button, which is usually considered a WW2 button.

See the Royal Army Pay Corps Buttons on Charlie Prince’s Jacket in the images below.

RPF PREMIUM MEMBER
You know I've never seen the movie, but after that good bit of info I now HAVE to watch it.

Kokanee said:
You know I've never seen the movie, but after that good bit of info I now HAVE to watch it.

Definitely well worth a watch. Christian Bale, Russel Crowe, Alan Tudyk, Logan Lerman, and a few others. The director made Logan and Ford v. Ferrari as well.

I really do miss westerns as a genre and wish they made more of them. 3:10 to Yuma is a great movie!

I do have to say that absolutely LOVE this movie!

And the behind the scenes prop stuff is really cool too!

RPF PREMIUM MEMBER
Thanks for the information!

Of course the buttons should bear the QVC (Queen Victoria Crown).

That movie is fantastic. The costumes however don't look period to me; interesting in your interview that period-correct details were overruled by the people in charge.

That holster rig looks like something out of Buffalo Bill's Wild West show, performing for Eastern and European audiences, rather than something worn in the 19th century West.
Last edited: Feb 20, 2020

I love this movie. In my opinion, the best modern western made- perhaps the best western ever made. The "feel" of it is so raw. You want to duck during that opening scene!

But I wanted to add, for those interested, the firearms used in the film (perhaps not all of them, I don't know) were provided by USFA, in Hartford, CT. They currently hold the original patents that Sam Colt filed (the actual paper documents). I had a USFA "rodeo" model for a few years and it is an absolute work of art. They make modern Colt revolvers- they even picked up where Sam left off with his serial numbers!!!

I don't have specific information, but for those inclined, you now have a solid lead.

Thursday at 8:19 AM
smithjohnj
S