RPF PREMIUM MEMBER
I figured that starting a new updated thread on this topic makes sense over the one from 2017.
All of these items are of my strict opinion based upon my own research and experience. Feel free to add your own opinions as well.

Shirt - What Price Glory or Wested

Pants - What Price Glory or Wested

I can only comment on the Wested jacket. They are pretty much a no-brainer choice. I have two of theirs (Raiders and a Bond Morocco) and can recommend them. Have had them for a few years now in regular use.

RPF PREMIUM MEMBER
To add - Wested just released a Legacy edition, which is their Hero jacket with the same weight leather and hardware as the original jackets.

Unfortunately, they took it down shortly after the announcement due to COVID impacting their shop, but keep an eye out for when it returns...

I would also suggest you look at Screencapped Hats for the fedora.

I have a set of coyle boots, Todd's costumes used to sell. very nice and very rugged.
D

chazzychaz said:
I have a set of coyle boots, Todd's costumes used to sell. very nice and very rugged.
Click to expand...

The problem is they don’t sell them anymore.

My pants, shirt, and bag strap are all from What Price Glory, and my bag is from our own Indy Magnoli and I’m pretty happy with all of them, although I did spring for the reproduction bag with modern pockets. I also had to use a pair of pliers to get the bag strap buckle through the ring on the side of the bag.

I have the Wested lamb -- also many years old. Incredibly comfortable!
D

RPF PREMIUM MEMBER
Looks like Wested is back open for custom orders, so you can snag one of dem dere Legacy jackets!

masterjedi322 said:
Looks like Wested is back open for custom orders, so you can snag one of dem dere Legacy jackets!

They have several buckle options for the side straps.

Anyone know which is screen accurate?

They also have an interior choice:

Satin sleeves and cotton rest or all satin.

Anyone know which is cooler?

I went with the satin sleeves/cotton interior option and it breathes nicely. One drawback about the sleeves: I usually wear a wristwatch, and it rubbing against the interior over the years has caused fraying on the left. I hesitate to get it repaired as it'll only happen again.
D

RPF PREMIUM MEMBER
My Herbert Johnson, size 55.5 with the turn arrived a few days ago. I went with Rabbit to be accurate.Michelle did a fantastic job recreating the Ravens bar hat for me. It is very comfortable, lightweight and has a great floppiness. It is a 4.5 inch bashed crown height which is the perfect dimension for this hat size.
The brim was made with the same dimensions as the original hat. On my head though the brim was too large. That isn’t Herbert Johnson’s nor Michelles fault. As I have stated in other groups I simply broke out my brim trimmer and lopped 1/8th of an inch off. Was that scary to do on THIS hat? Absolutely. But I already have done it twice on two Akubras so I felt confident. I hated changing the hat Michelle made for me but now it fits my head much better. She said next time they can just trim it to whatever I want.
I cannot recommend HJ or Michelle enough. You will pay just a smidgen more for an HJ over other hats but you are getting at least a small piece of the original movie hat.
Already planning to pick up a Last Crusade, a seaplane and the Raiders 40th when it releases. 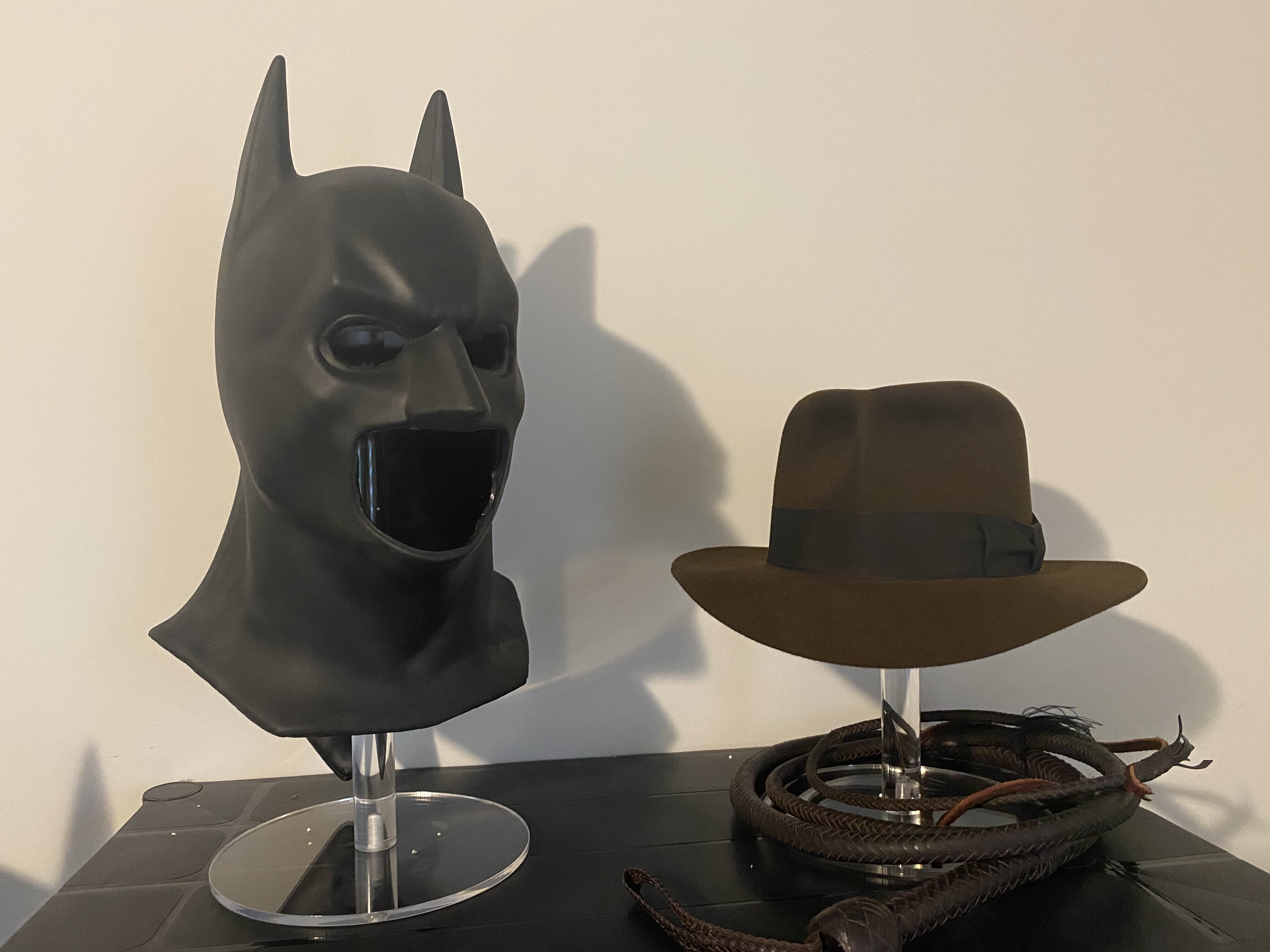 I have a costume I put together years ago that's pretty decent.

My hat is from the UK (possibly the brand mentioned, but I'd have to check), and I had to "bash" it myself (which looks pretty nice I think). I then wore it in a rainstorm, which shrunk it slightly and caused the "brim twist" everyone was/is after. A happy accident. The side bow is not the exact style used on screen, but the width and color are right so it's minor in my opinion. Mine is rabbit fur, not the desirable beaver fur (which probably wouldn't have shrunk in the rain).

My shirt is from Coyles. Not sure if he still offers it. Sizing is perfect but tails are short (as they were in the film), as pants were worn at the waist, not the hips, back when the movie takes place. (so the pants need to have a long outseam). Make sure you air dry your shirt after laundering, unless you want to make it a bit smaller.

My pants are some I found locally. Not the exact "pink" color, but the overall look, "drape" and weave look very good.

Pant belt is the old military one. I think it's dark brown for Raiders. (mine's the right color whatever it is) I had the same belt when I was in boy scouts!

Gun belt came from Coyles (I think) as did the holster. I wet formed my holster using an old Colt .357 that was my Dad's. I bagged the gun so no moisture touched it (it was restored by Colt) and let it sit overnight.

Whip is from a maker in Australia. I do not remember who. Might have been an eBay purchase. It's pretty sweet in any case.

Whip holder I think was from Coyles too. Not much to it, so not a big deal really.

My bag is the correct gas mask bag; leather strap may be from Coyles, or another seller. I don't remember now.

I had Alden boots but I destroyed them (and sold them destroyed on eBay). I have not replaced them yet. My Redwings hold up much better to my abuse, but not screen accurate of course.

Jacket is Wested, with modified details (based on screen caps from the time) and made in Horsehide, rather than lamb. I wanted my jacket to wear like iron, not cloth. I have "distressed" it (which is not easy on their horsehide!) and worn it quite a bit outside the costume. It looks great now, and still stiff as a board.

The pistol was not mentioned? I believe it was a Webley revolver for Raiders. I had planned to get a replica (I don't need a real one), but never got around to it. Plus it's generally safer to be "unarmed" around here in the dark anyway... Since the top flap covers the pistol anyway, it still looks acceptable, even empty.

It is a fun costume for sure, and everyone who sees it knows EXACTLY what character I am.

Jamesfett said:
They also have an interior choice:

Satin sleeves and cotton rest or all satin.

Cooler temp would probably be all satin.

The screen one was satin sleeves and cotton body. I have this in mine and I think it's fine. The weight of the leather does more with temperature than the lining I'd say. The "correct" lamb is very thin, and would be cooler than the heavy horse I had mine made of.

Jamesfett said:
They have several buckle options for the side straps.

Anyone know which is screen accurate?

Mine is accurate for Raiders. I'd need to take another look at it and get a photo for you if I can remember to do that tonight...

Sorry for the delay.

Pictures of the buckles and of the "weathering" on mine. I accelerated some wear at first, but now it's all real wear from wearing it.

ID10T said:
Sorry for the delay.

Pictures of the buckles and of the "weathering" on mine. I accelerated some wear at first, but now it's all real wear from wearing it.
Click to expand...

I was part of an Indy-centric forum back then (I can’t remember the name) and like here, there was a lot of research and screen grab analysis to get the details right. Hopefully, they are still right!

And I forgot another detail on my jacket. The sleeves were a bit shorter than I wanted, so I was able to unroll an extra fold Wested put at the sleeve end (Wested- Peter I think is his name?) suggested trying this. So it’s still finished, but about 1/2-3/4 inch longer. Perfect for my monkey arms now. Obviously this has to be done prior to any weathering.