Found this for sale on the AB Emblem website, they make the official patches for NASA.

This patch is a replica of the Mission Patch worn throughout the movie. Made in the Apollo Era style, using gold metallic embroidery. This replica was designed with the help and insight of Space Enthusiast Brian Mix, and the art was re-drawn by Michael Davis.

A cool little mix of reality and fiction. well worth a buy for any 2001 fan.

Nice find! Here's the link for anyone who is interested.

I have to ask though, does anyone in the film actually wear embroidered patches like these? The astronauts wear what seem to be printed insignias on the shoulders of their uniforms and flight suits, rather than embroidered patches, as they are thin, flat, and wrinkle along with the fabric/material they are on: 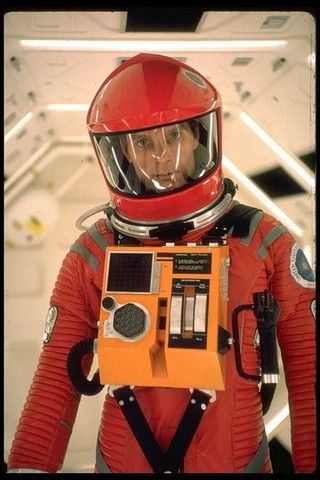 RPF PREMIUM MEMBER
Thanks for posting. I needed to get caught up on my ISS expedition patches anyways, but it was not obvious at all they had this too.

I definitly can recommend that patch.

I bought it early 2018 as well for my Discovery Crew overall.
With the wide outer gold embroidery it isn't absolutly screen-accurate, but with its fine retracing of the "star rays" it still is 100 times better than those thick striped badges you usually find on ebay and alike.

The originals were indeed printed. Some kind of flocking print as it seems from the deterioration of the original badge on Bowmans overall.
This and the following pictures were all taken from the 50th anniversary exhibition in the German Filmmuseum Frankfurt, where we were invited to. 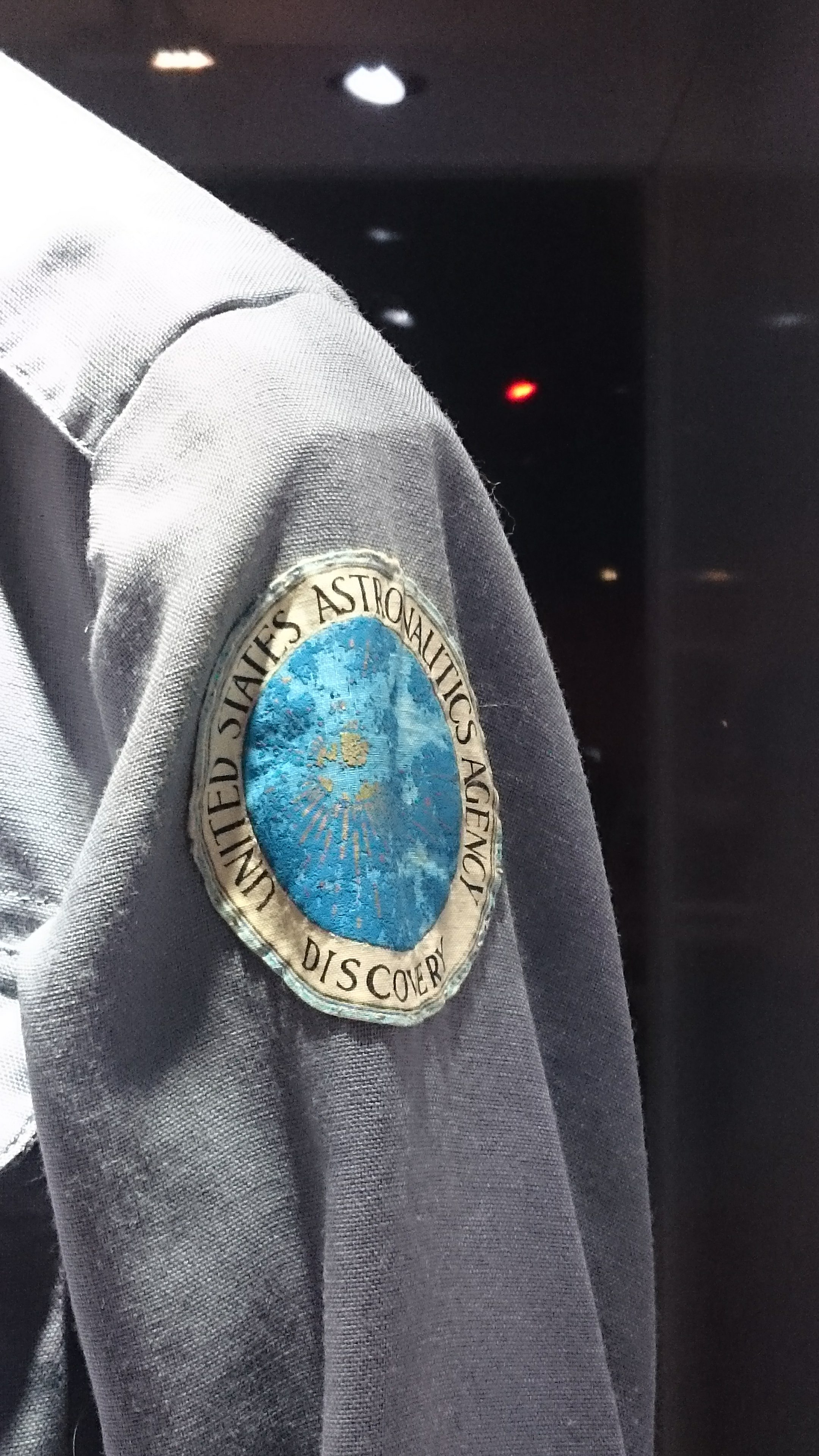 The other patches (except nameplate) are both stiched. 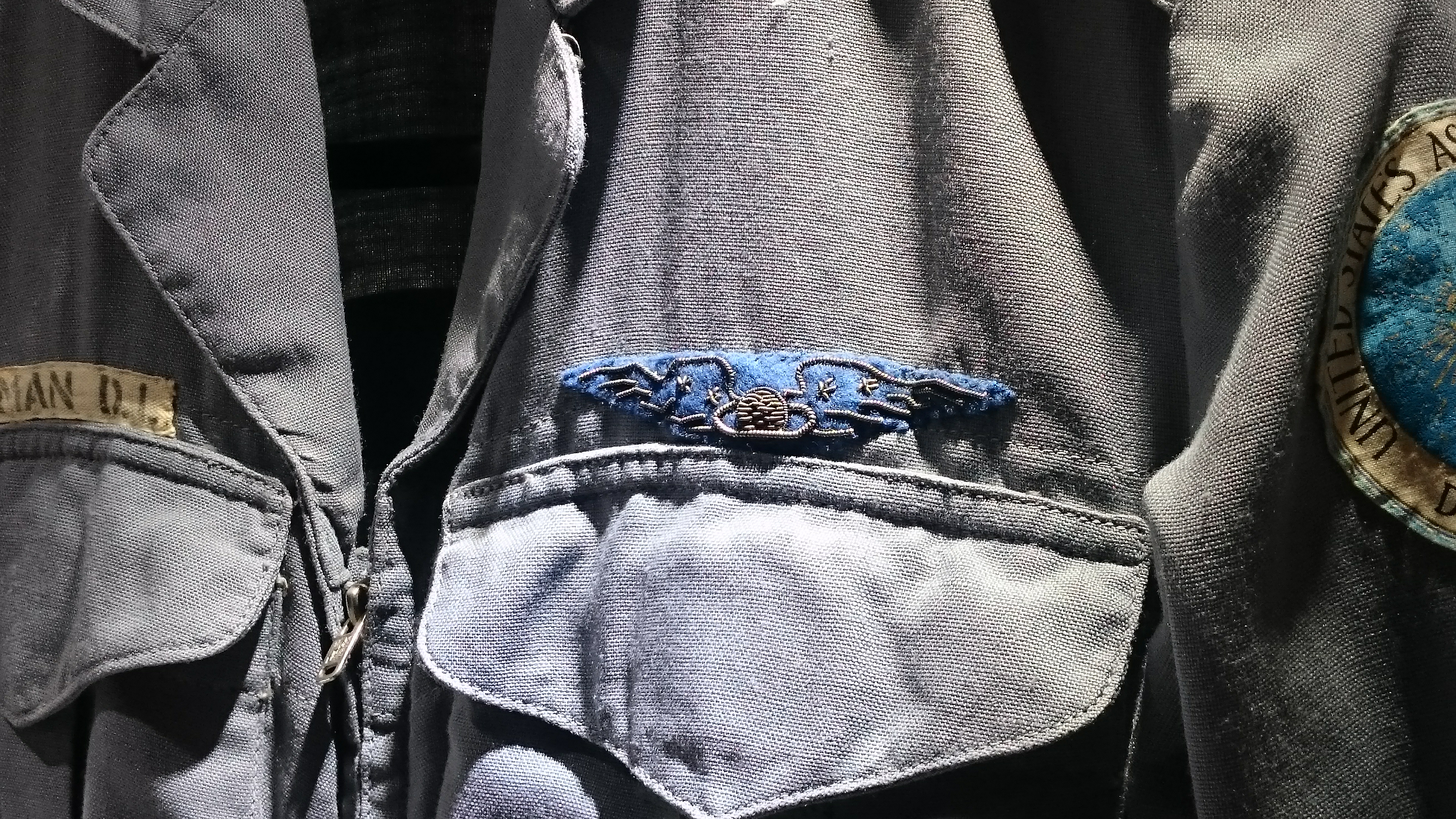 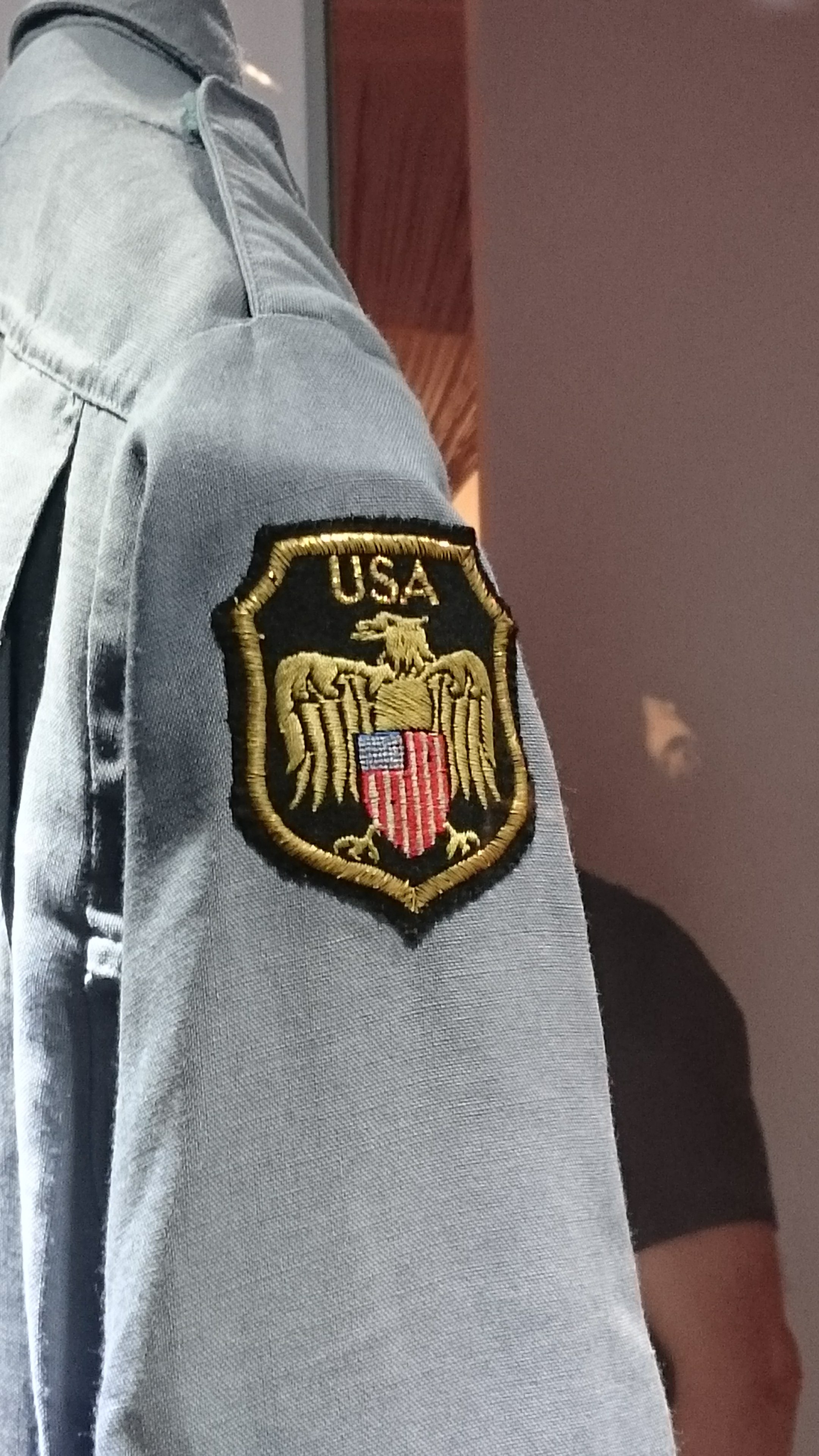 Again the widely obtainable are not perfect, but closer, so I only added the rear feather on the eagles head by hand and painted the background of the wings darker. 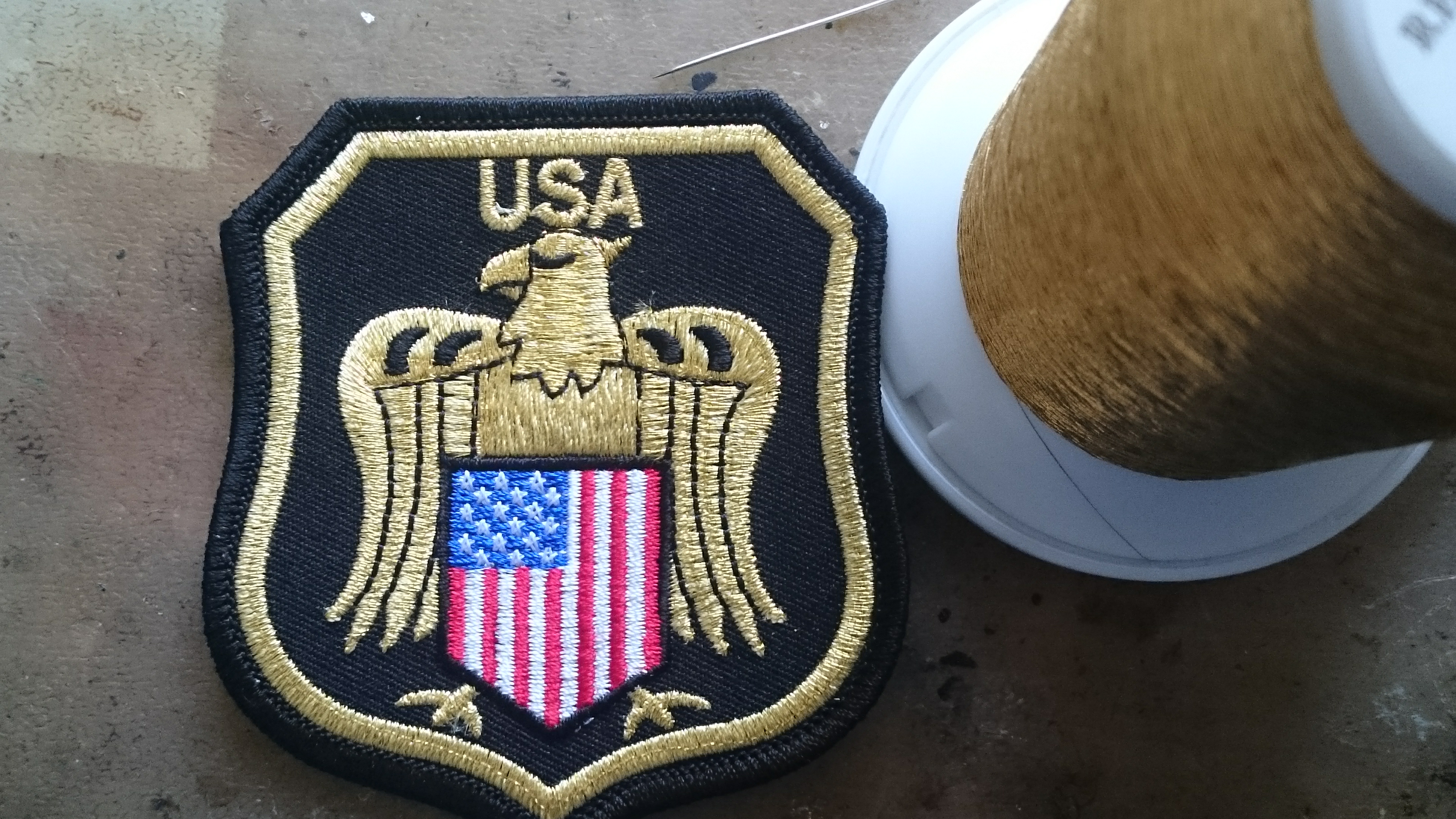 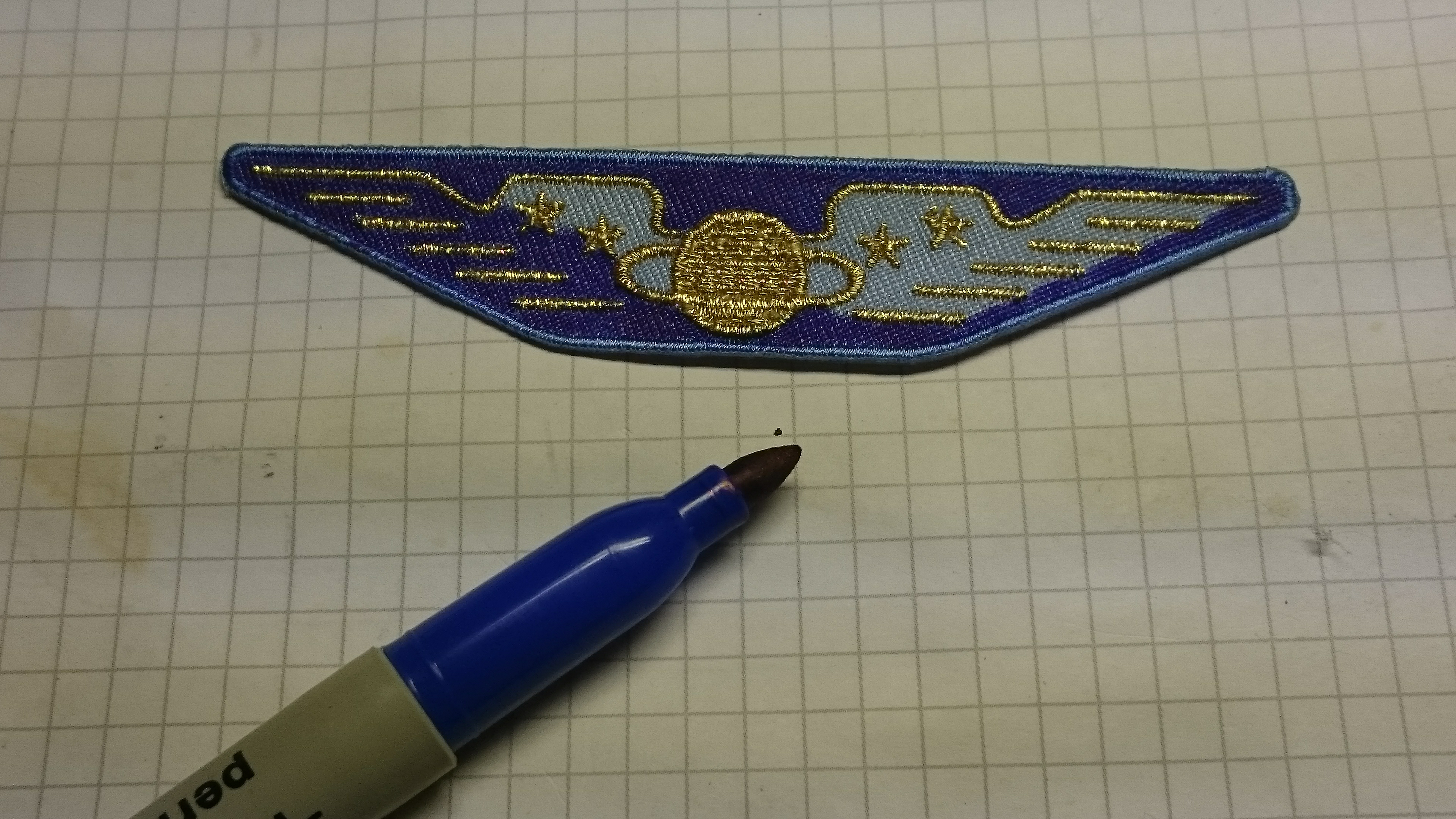 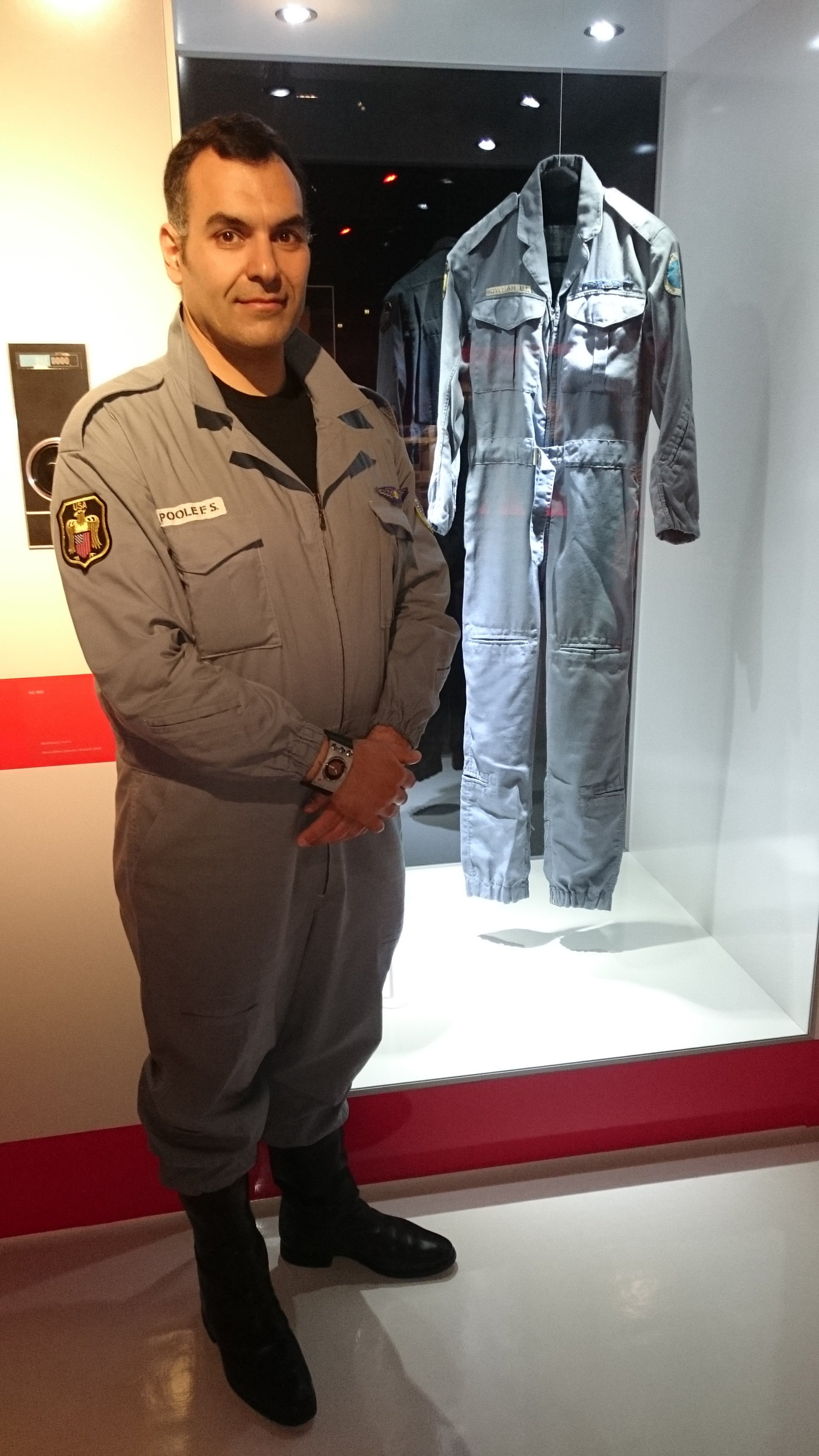 I didn't realise Bowman's overalls actually survived - I was under the impression most of the props were destroyed?
Very nice job on the replica Poole overalls... can you tell us a bit about the wristwatch?

Damn near everything was destroyed, yeah. I took a look at the David Bowman scene from 2010 to see if maybe they remade it in '84 for that film, but he only wears the orange suit rather than the jumpsuit. I guess it could have been something someone pilfered and saved; there were a few things that escaped Kubrick's destruct order.

Stojespal said:
Damn near everything was destroyed, yeah. I took a look at the David Bowman scene from 2010 to see if maybe they remade it in '84 for that film, but he only wears the orange suit rather than the jumpsuit. I guess it could have been something someone pilfered and saved; there were a few things that escaped Kubrick's destruct order.
Click to expand...

Yes, almost everything was destroyed. Still some (very few) pieces were found and safed, being in the ownership of some collectors mostly nowadays, who however are generous enough to lend their pieces for exhibitional purposes to museums.
You can tell how rare original pieces are, as even a HAL9000 sticker or a backlit panel foil is cherished and presented as great artifact.

The 50th anniversary exhibition at the Filmmuseum Germany basically represented all that is known to have survived, plus a few replica (like the PanAm bumphat and most parts of bowmans spacesuit). Dennis Gilliam being one of these collectors and restorators has a small informative website: 2001 Spacesuit
He was also quite helpful for hints on realizing the bumphat for the missus.

MML said:
...
Very nice job on the replica Poole overalls... can you tell us a bit about the wristwatch?
Click to expand...

Thank you.
Yes, that wristwatch was quite a fun quick-and-dirty one-day-build project, of which I am pretty proud.
The original was made by HAMILTON for the movies as did many other real-life manufacturers did contribute futuristic designs of their trade for 2001 (from the Parker Atomic Pen to the Space Hilton Hotel).
HAMILTON did kind of a limited recreation of the original X-1 model, but that is not really affordable for most of us, if you find one at all.

Thus with no measures at all I studied careful the only three solo pictures I could find at the time and several stills from the astronauts wearing them and estimated the size and shape of it.
Being a quick-and-dirty build I used my favourite material PVC Hardfoam sheet, a piece of PVC tubing, a cheap china wristwatch with similar hands like the original had, a piece of rubber sheet, three cabochon sockets, some velcro and a red pinhead. 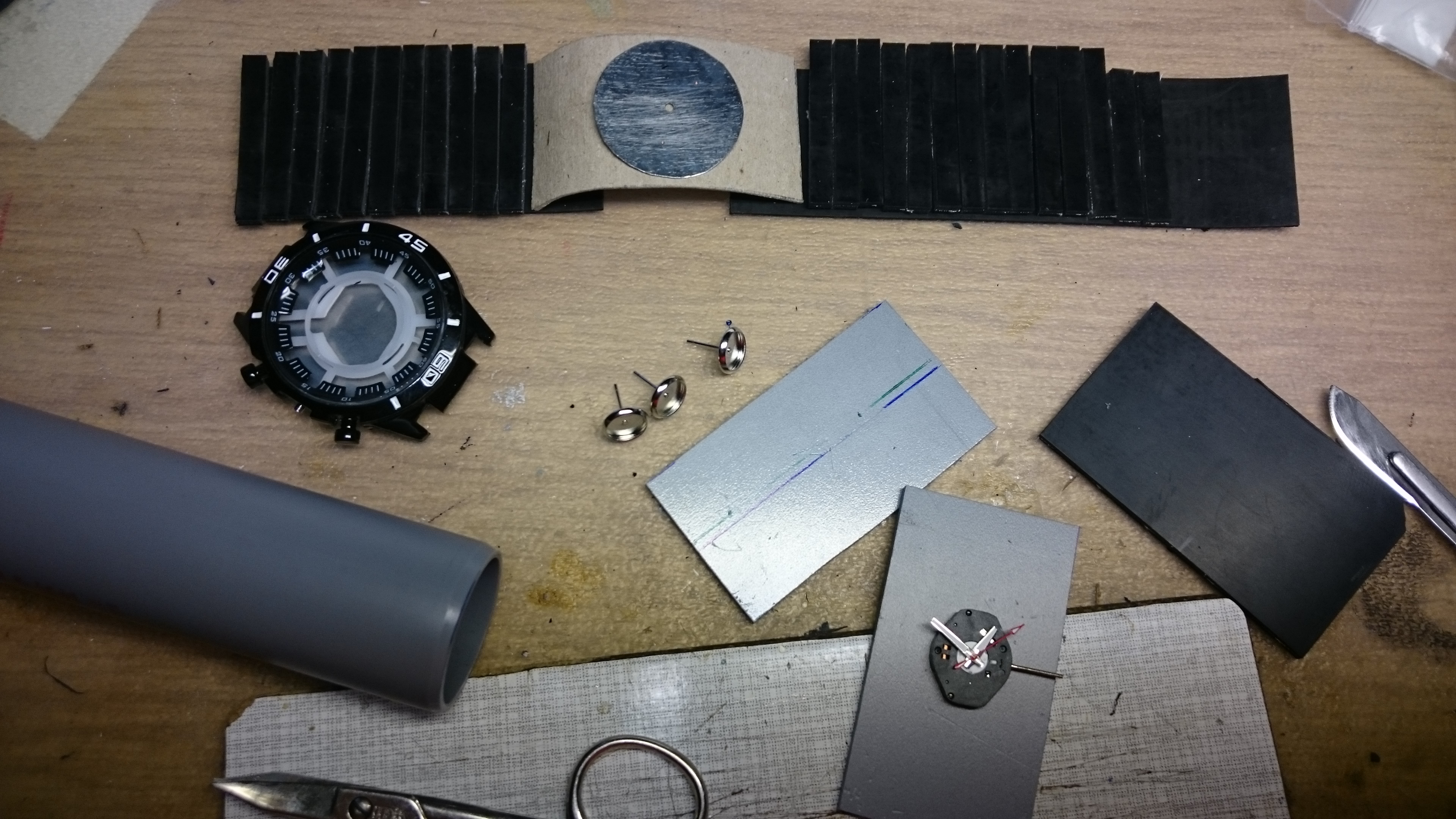 Though a bit rough and far from perfect, I now had a good, even working, look-alike. 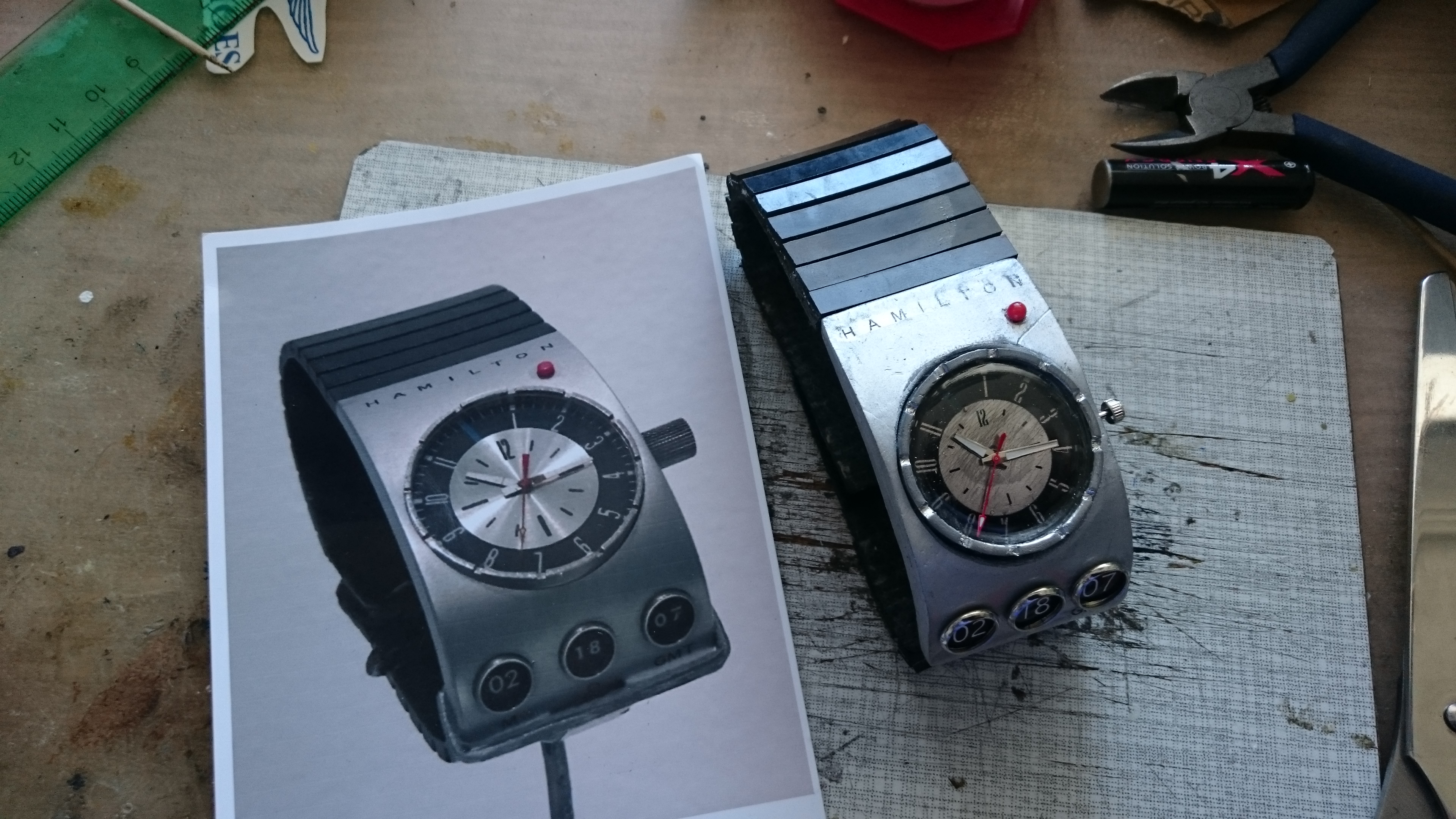 I was especially proud, when discovering they had an original at the exhibition and comparison turned out, that my measure estimates by eye were spot on!

Only the cabo sockets are too big, but that resulted from an earlier estimate of the watch being slightly bigger and not finding smaller ones in the limited time I had.
I definitly will get back to it and do a bit of finetuning someday.

Excellent work on that watch! I love the style, I might just have to find a way to make one too.

Also, re: the uniform, I know some of the props and suits from 2010 survived - famously, in Babylon 5, there's a spacesuit used in a major episode that turned out to be the replica of the blue suit they made for 2010, with a little window dressing on it. My first thought was that perhaps the uniform there for Bowman was used during his "ghost" scene in 2010, but he never wore that costume. So, that means it's got to be an original for sure - and a heck of a keep.

Wonder what Kubrick would think of the reverence his film has these days. Hope he knows how much it's appreciated.

Nice job on the uniform, all the way around!
Quick question: Where did you find the zippered jump-suit / overalls with shoulder straps?

Excellent work knowing that not a lot of original props/costumes exist. Love the "quick and dirty" watch

Wonderful work. I really like building props this way, from very basic materials. And the result is great.
I just noticed that the "12" is exactly at the top (where it's supposed to be), but the numbers on the outer ring are rotated 15 degrees counterclockwise. And you replicated this correctly. Isn't this strange? Are there any screen shots from the movie that show this too?

It seems that the screen-used Hamilton watch has suffered some damage/bumps along the years; hence the displacement of the outer ring.
Hamilton re-issued the watch (two thousand and one watches were produced) at a price of $1250 (2009 price). Width of the watch is 3.5mm.

Nice job on the uniform, all the way around!
Quick question: Where did you find the zippered jump-suit / overalls with shoulder straps?

Sorry ChuckMarble for the delayed response.
Since this isn't my thread, I didn't get a notification from the RPF until Markus quoted me.
I think I definitly have to create a thread of my own to show our 2001 cosplay making of to answer such questions (don't want to misuse breen2057 thread all the time for this).

To answer your question: the overalls are selfmade based on the Kwik Sew Men's Coverall pattern 3389 as a basis and then adapted to feature all the specific details of the Discovery flight suits.
A great help was this thread from CreedsGalBirdy Kubrick's 2001: A Space Odyssey coveralls


Markus & joberg
Thank you very much. Yes, I too deliberatly tilted the inner ring. There are very few half decent on-set views of the watch. I found only this on-set though obviously not on-screen shot (Marlboro package!). However one can make out that already here, the black digits of the inner circle are not equaling the outer rings white ones.
So either this was meant to be from the start or the displacement occured very early on, while the film was still in the making. 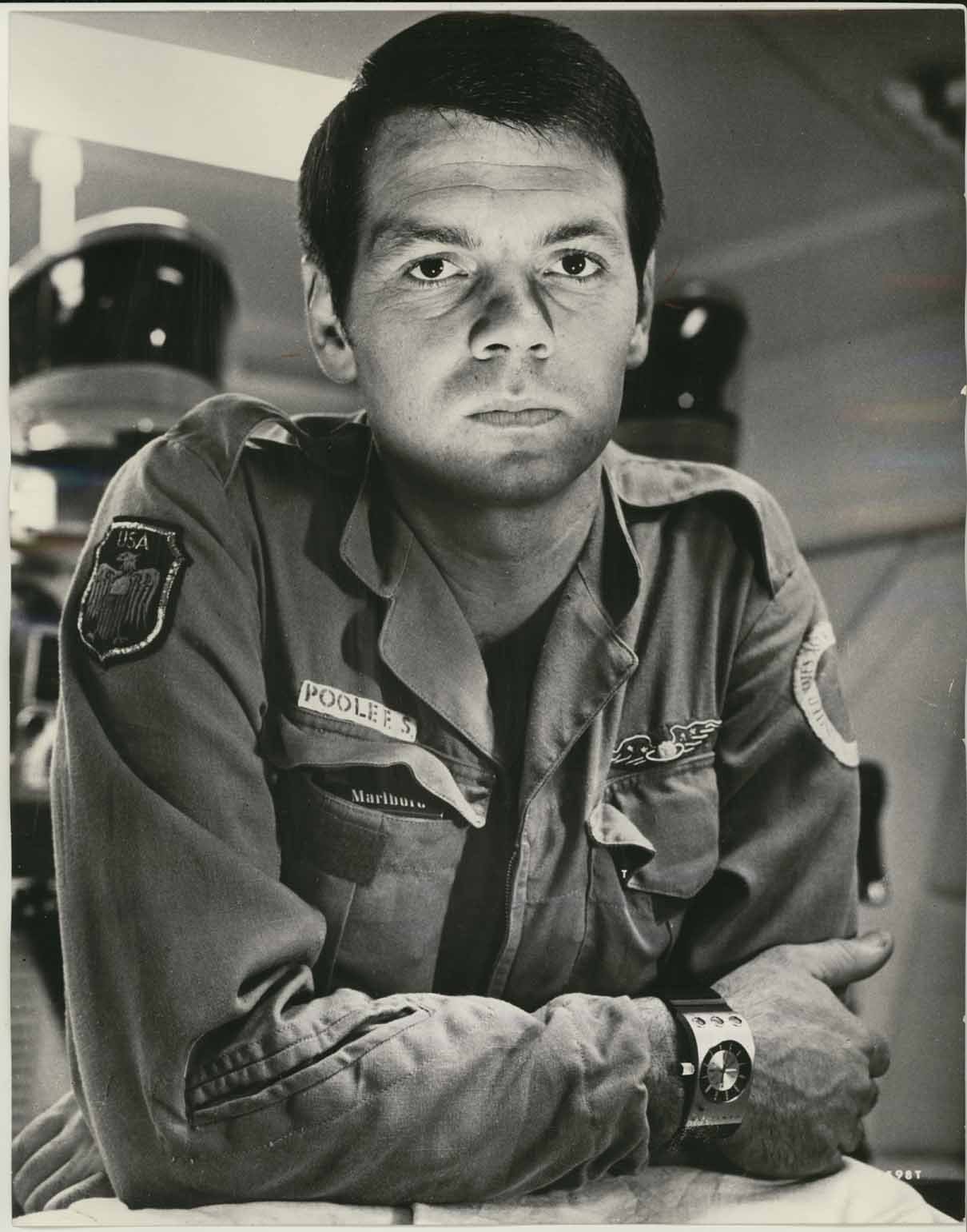