Nice! Really nicely done! As a fellow 3D printer I wanted to pass along some cleaning information. I am not familiar with the Shapeways support material but it sounds like the Objet stuff. I went through a lot of cleaning for my model and after a lot of research I ended up using a mild lye bath and ultrasonic cleaner. Check out my blog for more details: OPUS V: Lye Bath! - How to Clean Prints.

this is amazing work!!!! did you continue with the cockpit?

MFP said:
I've got to get a 3d printer! This sort of thing will change the face of modelling
Click to expand...

It has literally changed everything!

BruceKenobi said:
this is amazing work!!!! did you continue with the cockpit?
Click to expand...

Thanks! Unfortunately, I have not had the opportunity yet. I was working on a printer-optimized version of my VF-1A head model to try next, but never got around to wrapping that up. One of these days...

RPF PREMIUM MEMBER
With the original renders up top, one thing I noticed was the absence of what would be the entry hatch in Battloid mode -- when the head tips forward for the pilot to get in and out of the cockpit. Was that taken into consideration? Also, for all the lovely, detailed concept and engineering art, I have never seen anything that shows how the cockpit reconfigures between the vertical and horizontal modes. How is the pilot's seat gimballed, and in a way that still allows for ejection? Where do the various displays and screens come from?

I, too, have been eager to see you continue on this, but knew your Darth Real Life considerations and didn't want to be pushy.

Inquisitor Peregrinus said:
With the original renders up top, one thing I noticed was the absence of what would be the entry hatch in Battloid mode -- when the head tips forward for the pilot to get in and out of the cockpit. Was that taken into consideration? Also, for all the lovely, detailed concept and engineering art, I have never seen anything that shows how the cockpit reconfigures between the vertical and horizontal modes. How is the pilot's seat gimballed, and in a way that still allows for ejection? Where do the various displays and screens come from?

I, too, have been eager to see you continue on this, but knew your Darth Real Life considerations and didn't want to be pushy.
Click to expand...

That is a fantastic question. Plenty of consideration went into it, and many attempts were made to try to work out both the battroid cockpit reconfiguration and battroid pilot egress. I eventually came to the conclusion that it is all just too much "anime magic", and won't work without significant compromise to the design.

Case in point, the "VF-1 Master File" books from about 10 years ago worked out mechanical schemes to make it work, and they had to do some pretty weird and unorthodox stuff to create the spaces required. They had to do things like have the entire nose gear bay rotate on a hinge at the front to pivot out of the way. Due to the curvature of the bottom on the nose section, there actually is a space between the nose and the wings in battroid to allow for this (if the gear bay doors remain attached to the pivoting bay), but the concept is not structurally sound at all.

For the DYRL design, the target for the battroid egress would be this drawing: 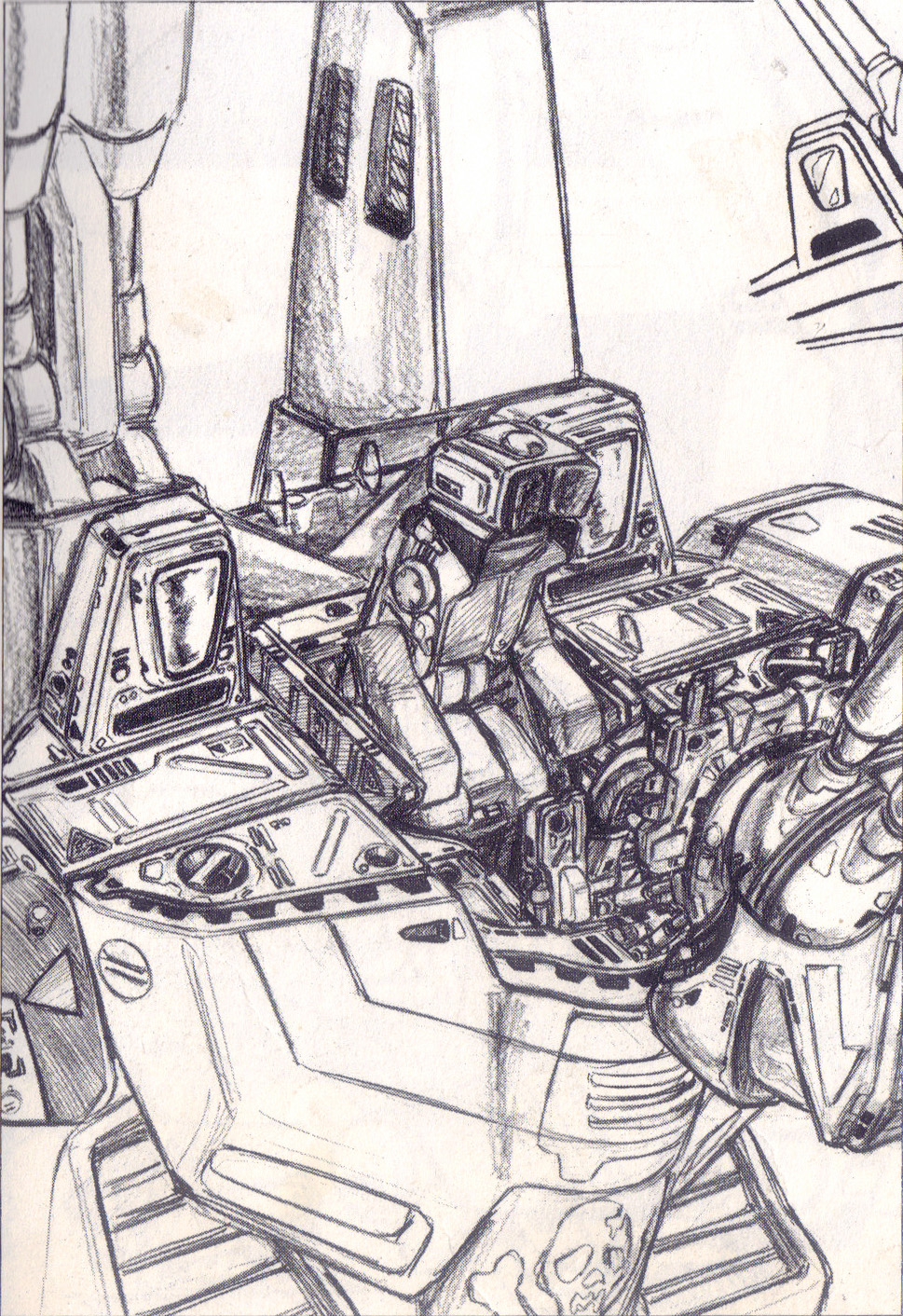 When discussing this on another forum some years ago, here was an image I used of my model, in wireframe, illustrating part of the problem: 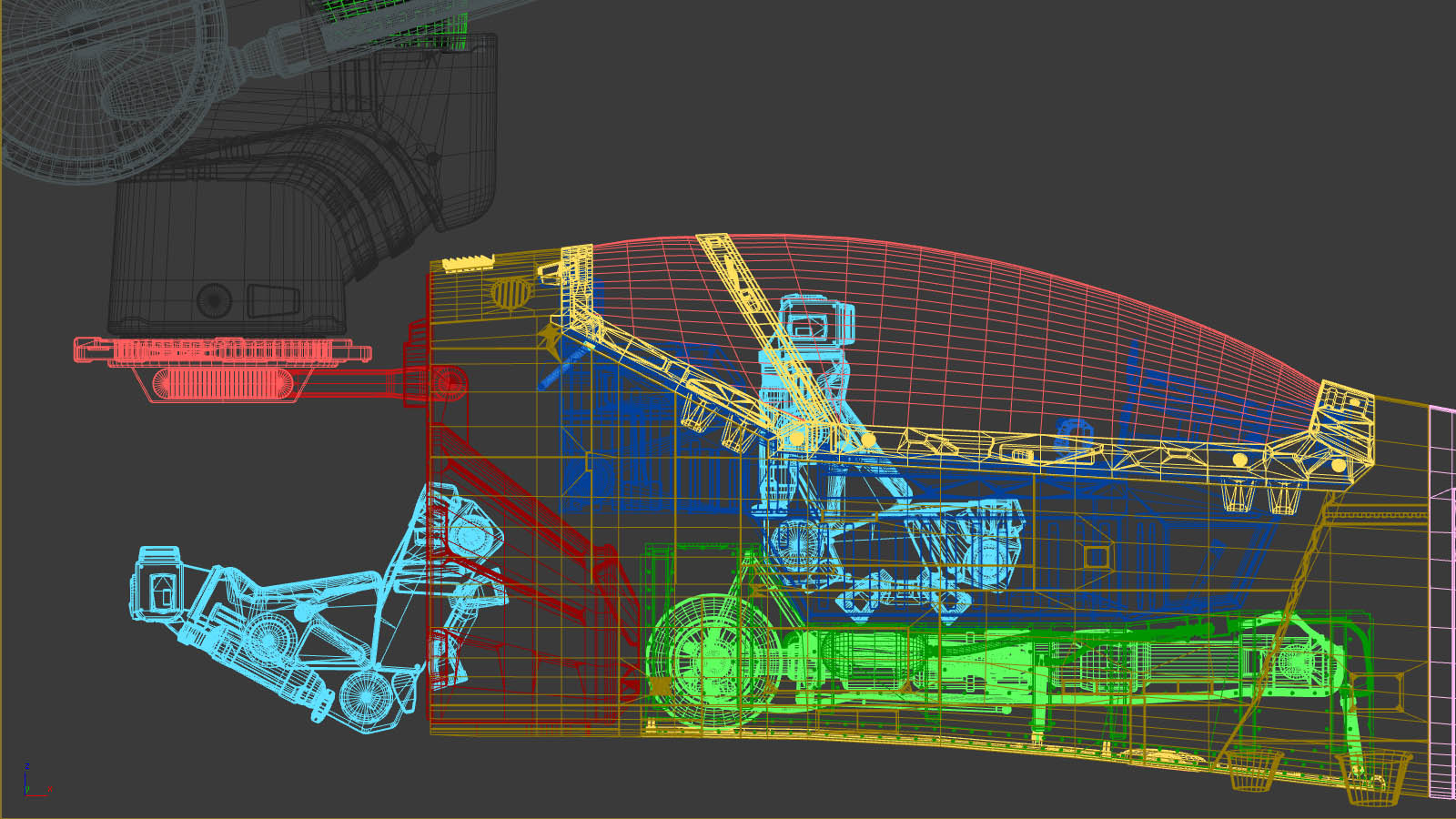 You can see 2 copies of the seat (which does support the battroid headrest configuration) in light blue, the nose gear bay portion that gets in the way in green, and the head cavity (where the egress hatch would have to be located) in red. The seat would have to go through a really tight S-curved path to get from one position and orientation to the other. Also, the flat area in the cavity, where the hatch would have to be, is large enough for the seat itself to shoehorn through, but hardly so with a pilot strapped in. Also, the "box" behind the seat (cockpit tub in darker blue) would have to somehow get out of the way.

That box behind the seat getting out of the way should be part of the battroid cockpit reconfiguration, and that is a big part of the challenge with that reconfiguration. The DYRL cockpit is completely redesigned from what was shown in the original TV series to try to do a better job of it, but there is still some big "anime magic" that would have to happen. The screens that come out and surround the pilot in battroid in the DYRL design must all come from this box somehow (though none of the drawn details seem to correspond between the two configurations), and it would have to do so in a way that left the required space for the seat to pass through for egress. 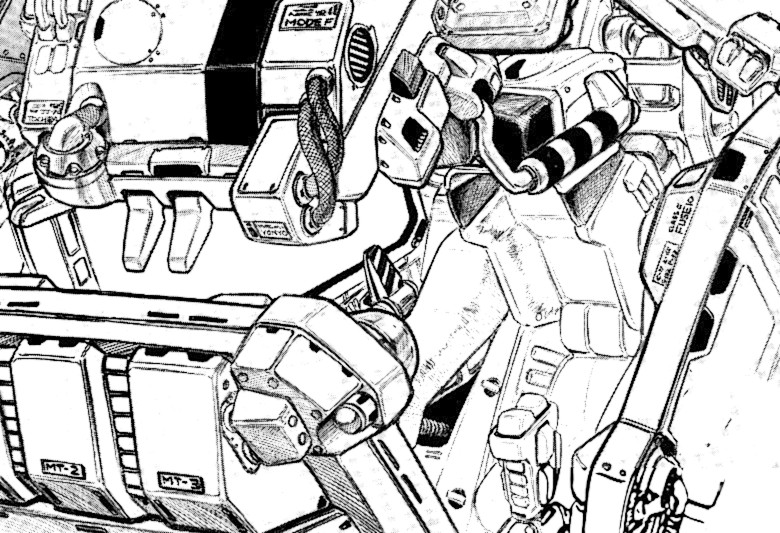 While it wouldn't be too hard to come up with a design where the top, front, and sides of that box break apart to become these screens (with the screens on the inside of the box in fighter mode), the exterior portions of that box would hve to have these shapes and details, rather than the design that remains consistent on all the DYRL fighter cockpit art.

The TV series cockpit solves this all by having the entire rear interior of the nose section be a huge empty cavity, which I never liked at all:

Not only would it require that the entire rear section of the nose be a hollow shell, but it also seems to require that additional space behind the nose (into the after fuselage section that becomes the back of the battroid) in order to have the required space, and especially to allow for the straight rails that the seats would travel upwards for the egress, as seen here on the 2-seater VF-1D in the original TV show: 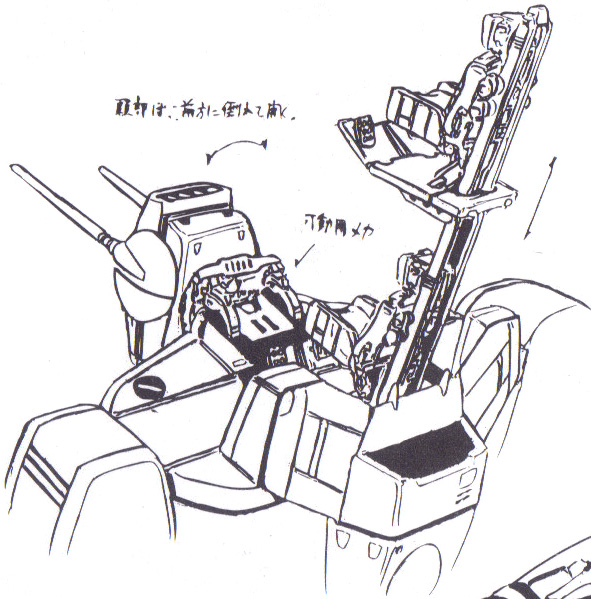 Obviously, that rail would be completely outside of the nose section, yet somehow attaches to the seats that came from inside the nose.

So, since I wanted to replicate as much of the wonderful and consistent detail from the fighter-mode original artwork, I decided to stick with that rather than make up a bunch of contrived mechanisms that would require altering the design substantially to make it all work.

My head cavity in the back of the nose section was based primarily on this image (sans the VF-1D head attachment, which has problems of its own):

It would be a total fantasy to even put together a design that would mechanically work, if not accurate to the original artwork, and making it in a way that could be physically articulated in a scale model would be a tremendous challenge. If anything, my more realistic fantasies were simply to model up the static battroid cockpit as an option, matching all that original artwork, but without trying to make it actually mechanically reconfigure magically into an accurate fighter-mode cockpit.

At any rate, nice job getting me to dig out my old files and start looking at this again, on one of the rare days that I actually have some spare hours to have some fun!

SpyderDan said:
At any rate, nice job getting me to dig out my old files and start looking at this again, on one of the rare days that I actually have some spare hours to have some fun!
Click to expand...

*lol* Glad to help. It's nice to know I'm not the only one who's banged my head against this to the same degree. I've mainly focused around the whole nose/cockpit/upper-torso area. Done my best to do side-by-side comparisons between series and DYRL versions. I admit, while I like the up-detailing in the latter, I tend to defer to the former when there's conflict. Sometimes an over-abundance of detail makes a thing look less real. You raise some lovely and cogent points, only some of which I'd thought through (or seen others think through) to that extent.

Do you also take it as read that the canopy cover is contained within the forward-upper fuselage shell that translates forward over the rearward portion of the cockpit subassembly?

With that out of the way, all of my focus has been in the interior and lower portions of the cockpit module, and its interrelationship with the rest of the fuselage during and after transformation. And in a way that doesn't require the nose gear to relocate.

How have you addressed the cross-structural support required for the legs to attach to the cockpit lateral housings? To me, that's something else that would block the nose gear from moving.

The only rough solution to all of that I've come up with is to have the pilot-seat rail be part of the battleoid's "back" torso portion. Mechanisms internal to the cockpit move the seat up and back, past the nose gear area, and into the vacated head cavity, where the seat grabs the rail and disengages from the cams that lifted it.

The bit I haven't been able to resolve in that is where the airseals all are. Obviously, one at the rear (horiz.)/top (vert.) of the cockpit, opening to the head cavity, big enough for the seat and pilot to pass through. But what's with the other hatch we see at the top of the torso, under where the head tips forward? They aren't physically in the same place. Looking at how the original action figures transformed, that space has to be kept relatively hollow for the head to be able to rotate through and the aft fuselage to be able to swing down past. Obviously, the "real" craft would have componentry that shifts into place in that area after the head and torso are in relative position, but I don't see how or why that would include a secondary hatch under the head's baseplate.

This is a beautiful project, not enough macross love on here. Any possibilities of offering larger scale kits of this? Have always wanted a "large scale" bust of the valk fighter. Kidslogic just started releasing their own. Robotech Saga Valkyrie VF-1J Mechanical Bust Statue by Kids

RPF PREMIUM MEMBER
Tell, SpyderDan, if you were willing to send me the files, I'd double the scale and tackle a 1:12 VF-1.

This kicks ass! looking forward to more progress on this one!

Post pics of your own 3D creations (not purchased)
2