16.5" SPINDRIFT from Land of the Giants build.

RPF PREMIUM MEMBER
Here is my 16.5" Land of the Giants Spindrift build. The model was made from files of the scanned 3'something Hero prop used in the Irwin Allen late 1960's Television series.
It was designed for Irwin Allen by Rodger E. Maus.

The kit was given to me for building another for a friend. I don't know who makes or sells them. I have no idea of the cost either.

Like most fans of the series, I have had several incarnations available to the public of this ship...The original Aurora Model, the REOPS, the old Lunar kit and the little cat toy from Moebius years ago(No, it wasn't an actual cat toy, I am being facetious ).
Currently there are several other variants, which although much larger and studio scale, are wrong and terribly inaccurate. I am glad I waited!

This model it a dead on replica of the filming hero and as such(thankfully), has warts and all! Unlike our kit manufactures who feel the need to "correct" everything, this captures the ship fans like myself know and love.

OK...The model is hollow cast so I removed the viewport, intake,engine and upper bubble areas. I wanted to reflect the original miniature as closely as possible...painting and lighting.(I detest overly lit models. As well as adding lights where there weren't any).

The model was completely airbrushed mixed colors to match my library of
reference pictures. It's also weathered and will be getting weathered more as it will be part of a crash scene Diorama. The striping was also air brushed. I actually stripped my initial attempt after reviewing close up pictures of the miniature. The stripping on the miniature was sloppy and wonkey in areas, so I reproduced that.

Currently the model has a practical interior per the filming model. I may scratch build the cockpit at least at a later date.

I replicated the pulsing effect on the intakes and bubble(per the filming miniature) with an option to also have it ramp up and down.
The internal lighting was done with warm white LEDS for the proper effect. Both the miniature and the full size prop used Incandescent lighting, as gave off a yellowish glow, using those horrible white LEDS with the blue glow is wrong.

So here is the model as it is currently. I still need to add the logos on either side of the hull as well as the "sparking" effect on the engines, as seen on the miniature. Again, Im glad I waited for this. I prefer the thing to be as accurate as possible instead of just being studio scale.

Ive attached Photos and two videos of the model.
Thanks! 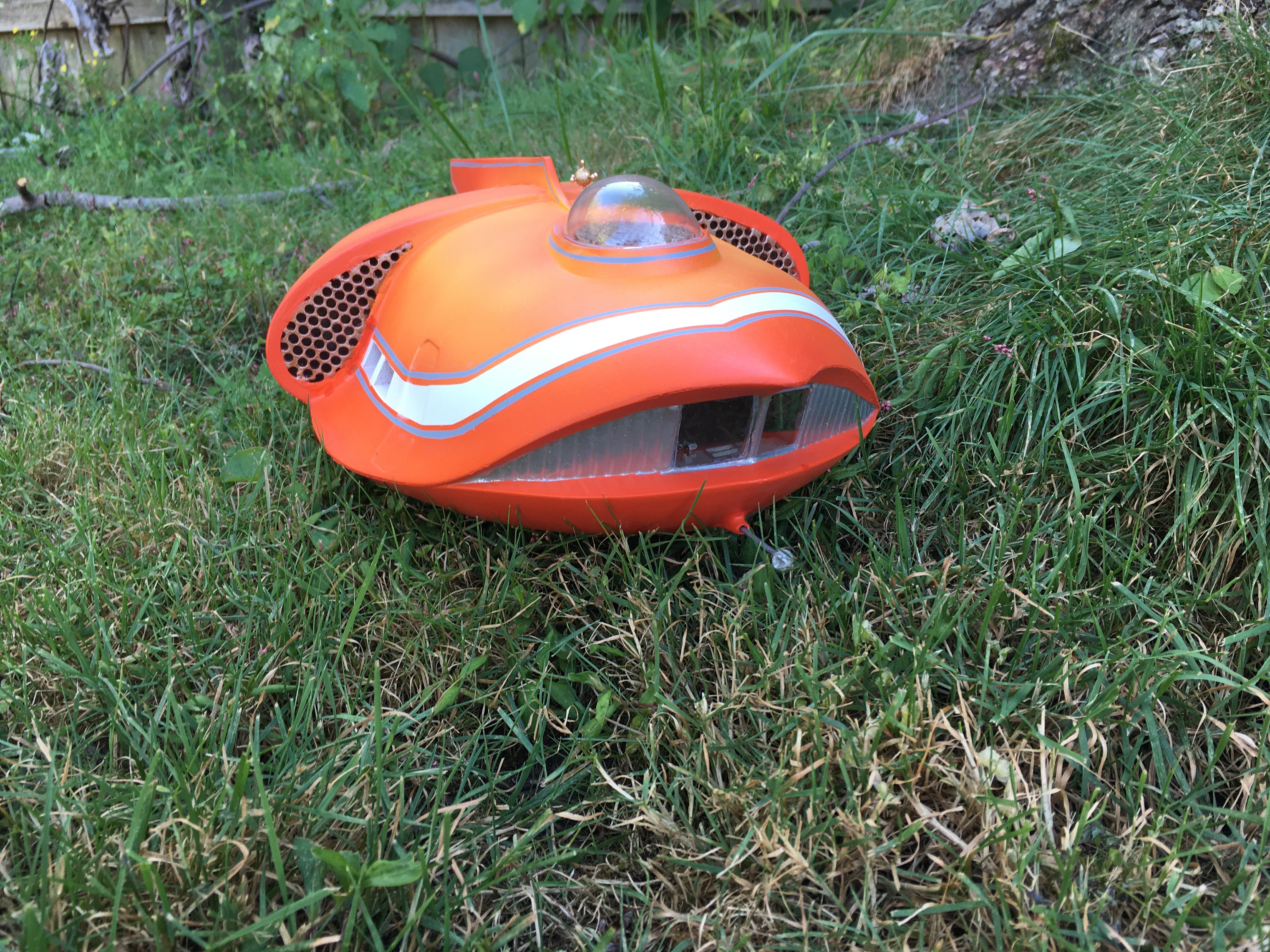 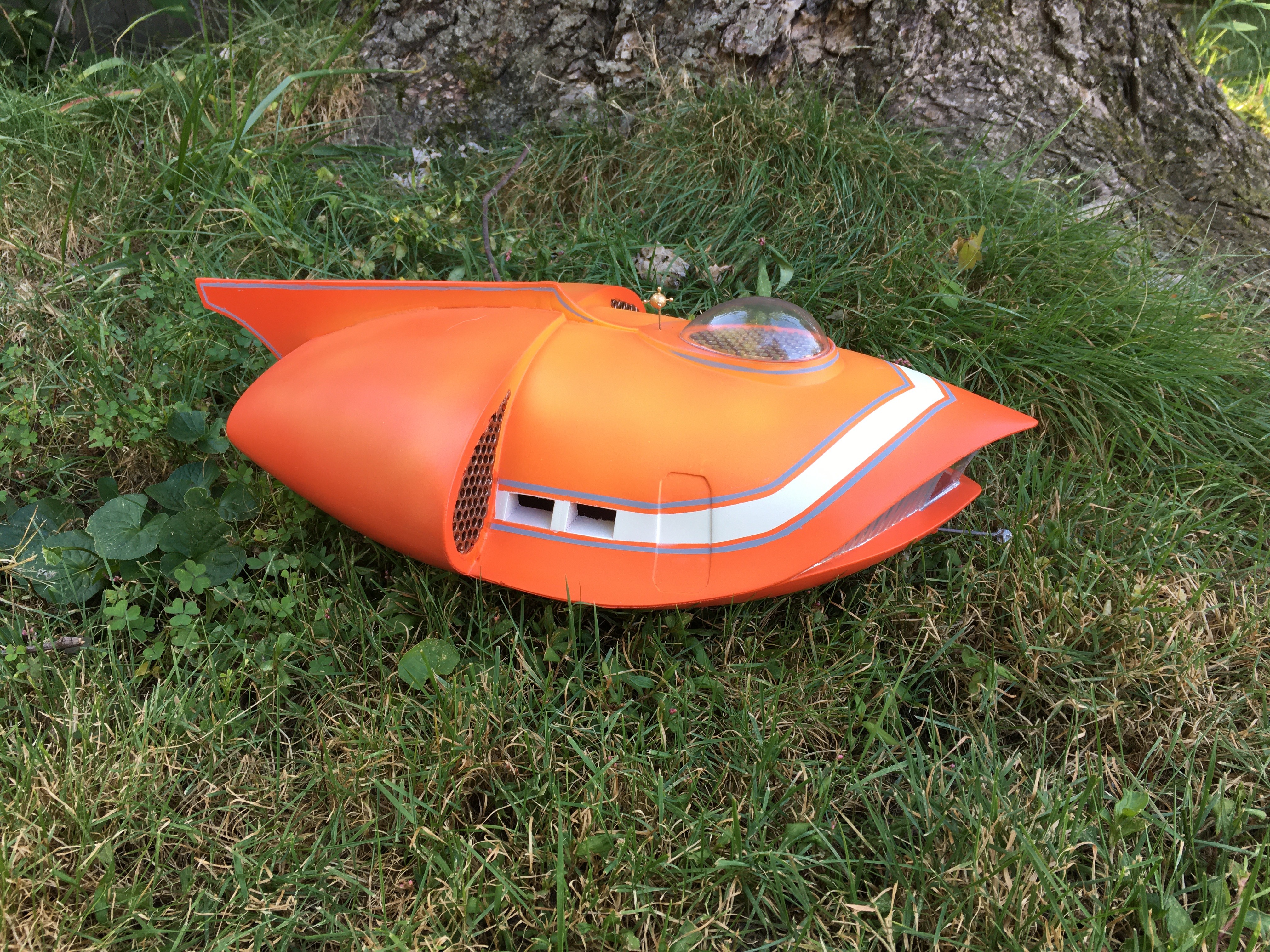 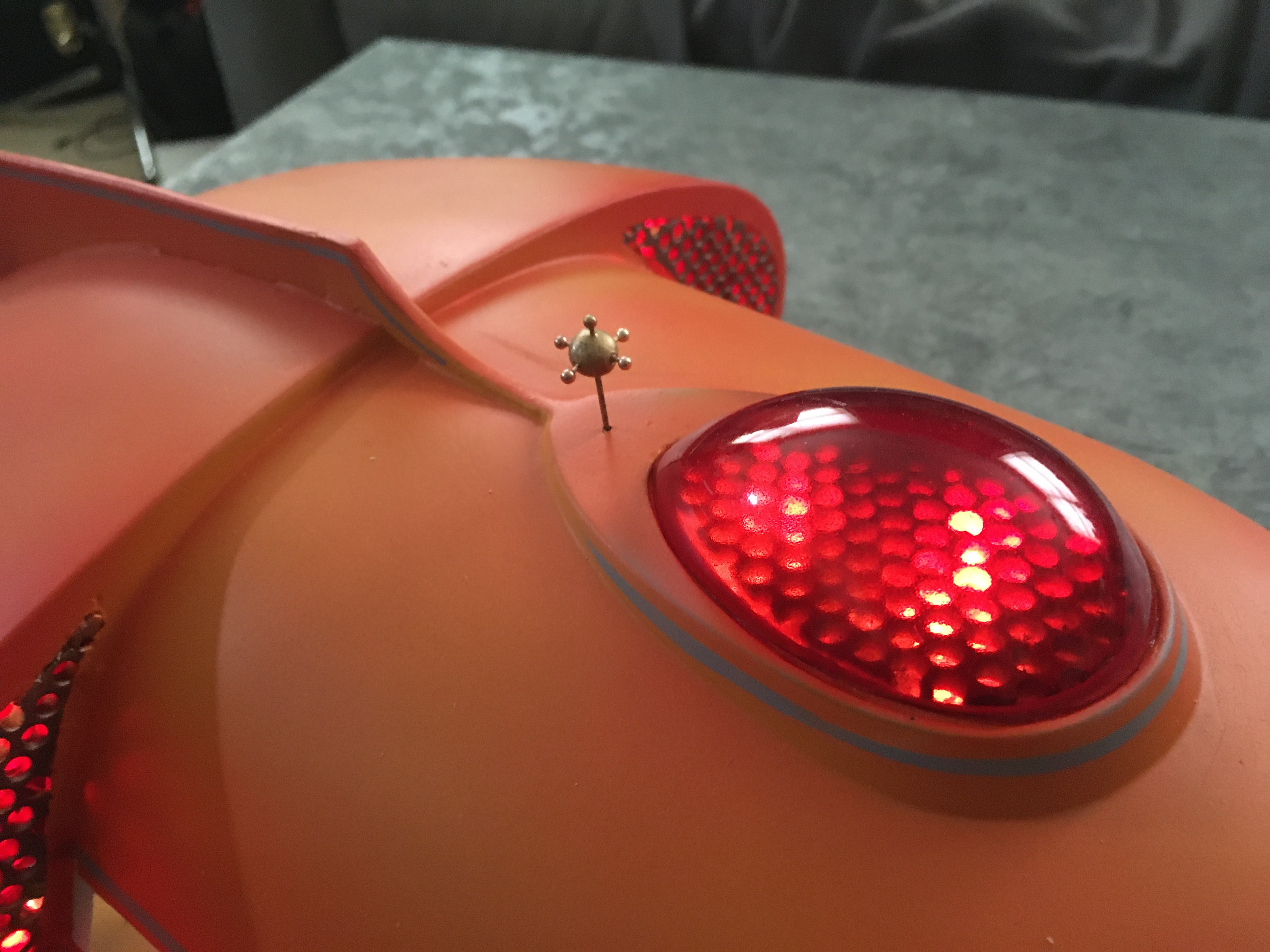 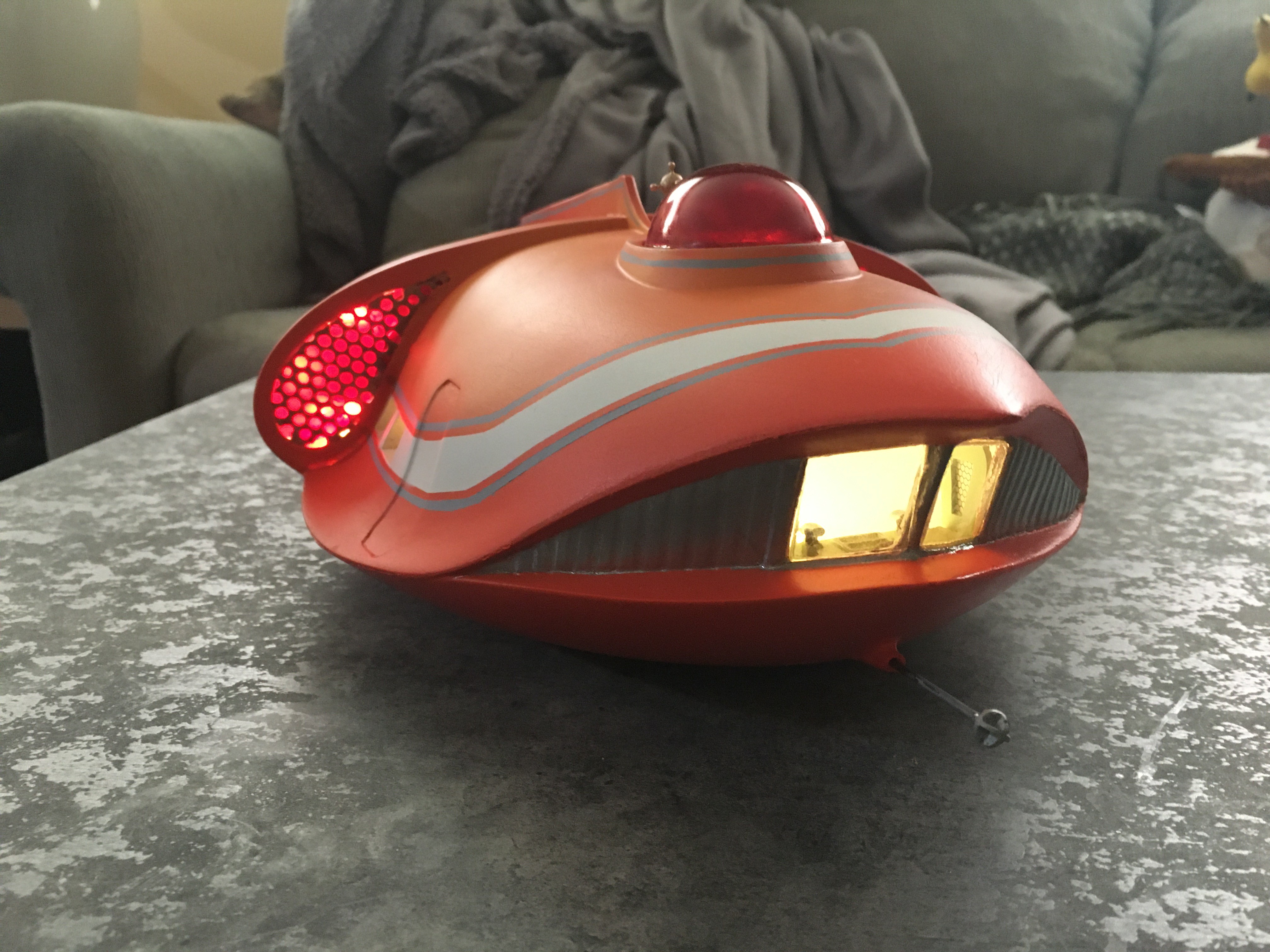 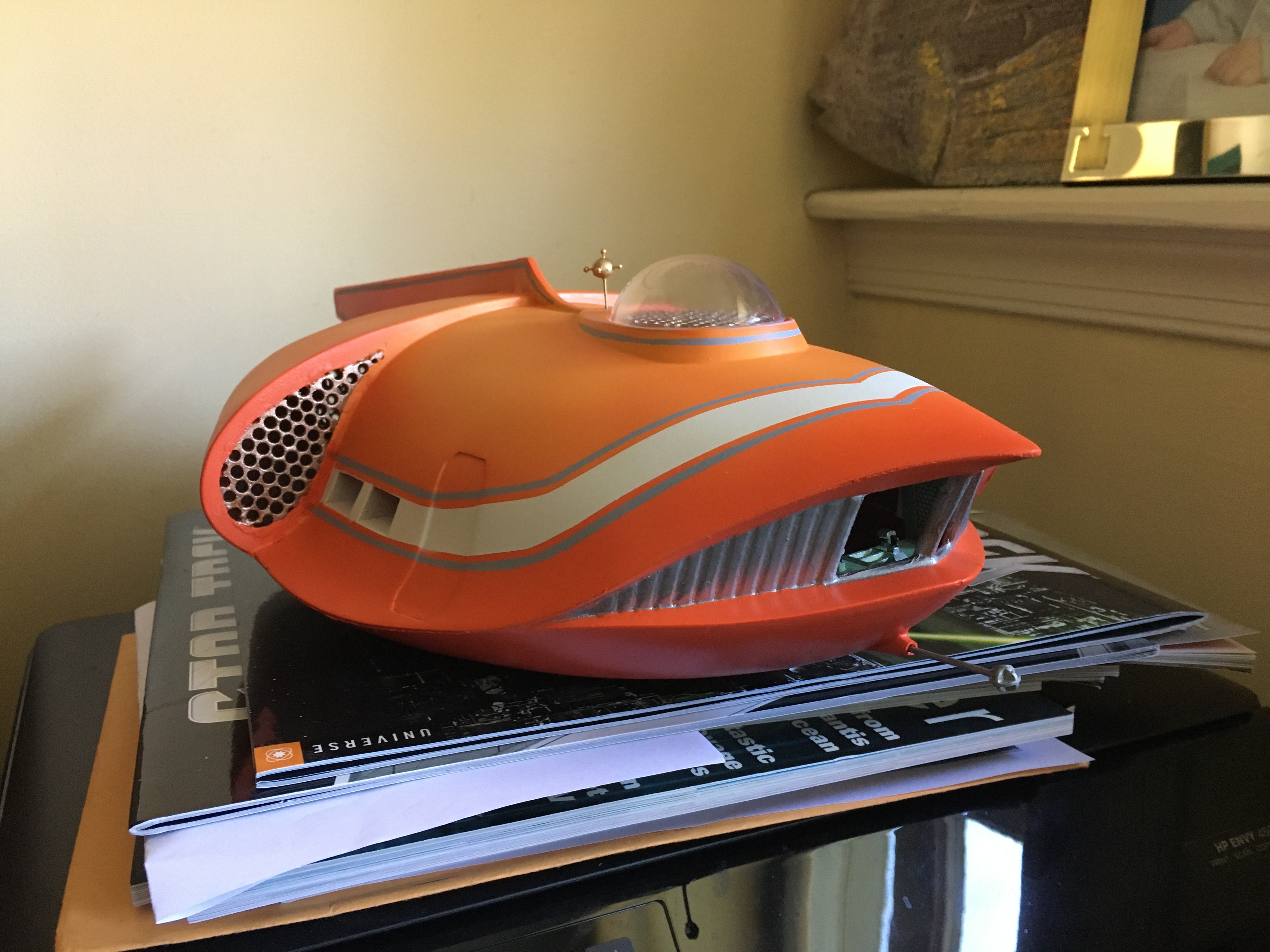 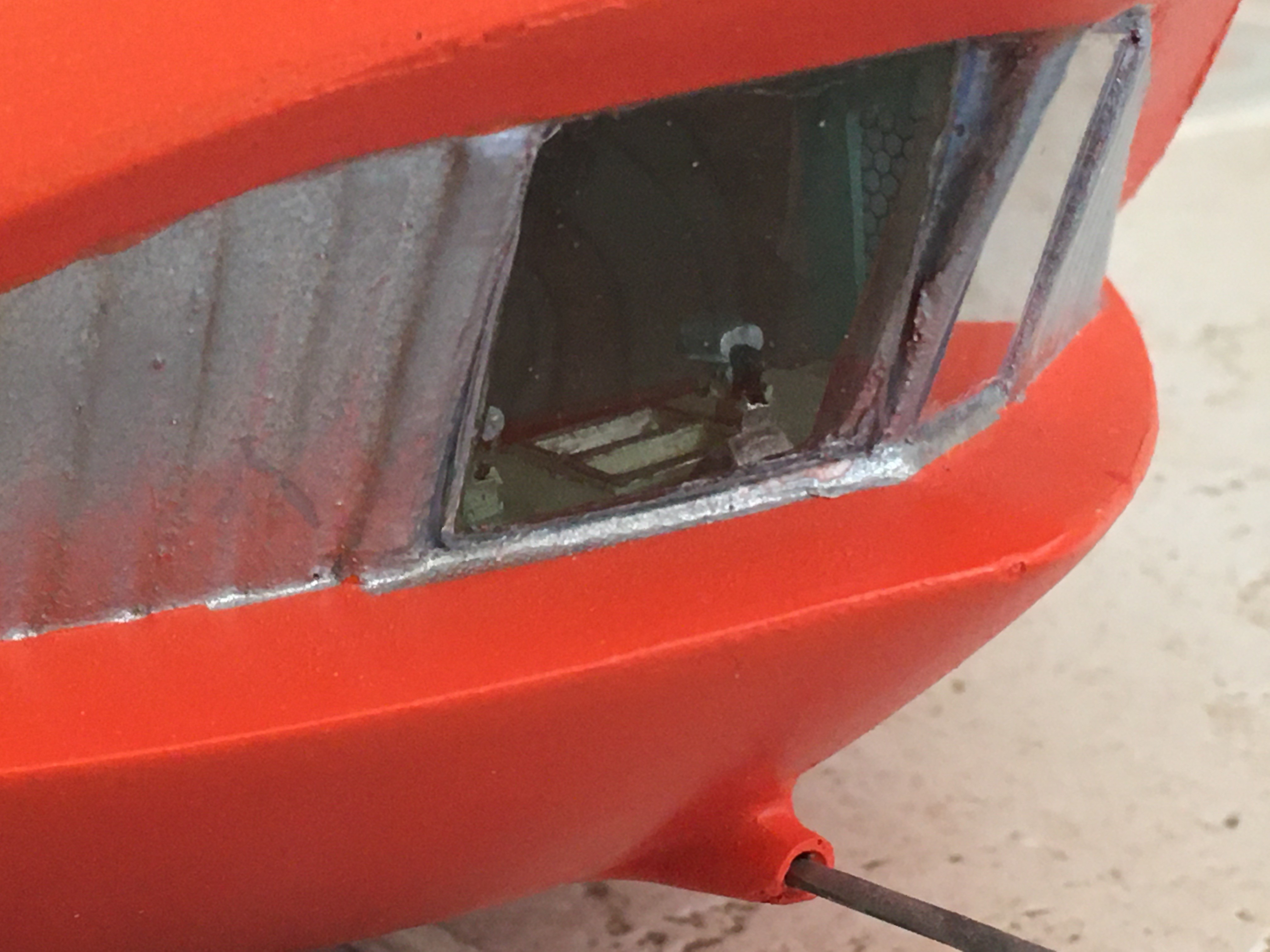 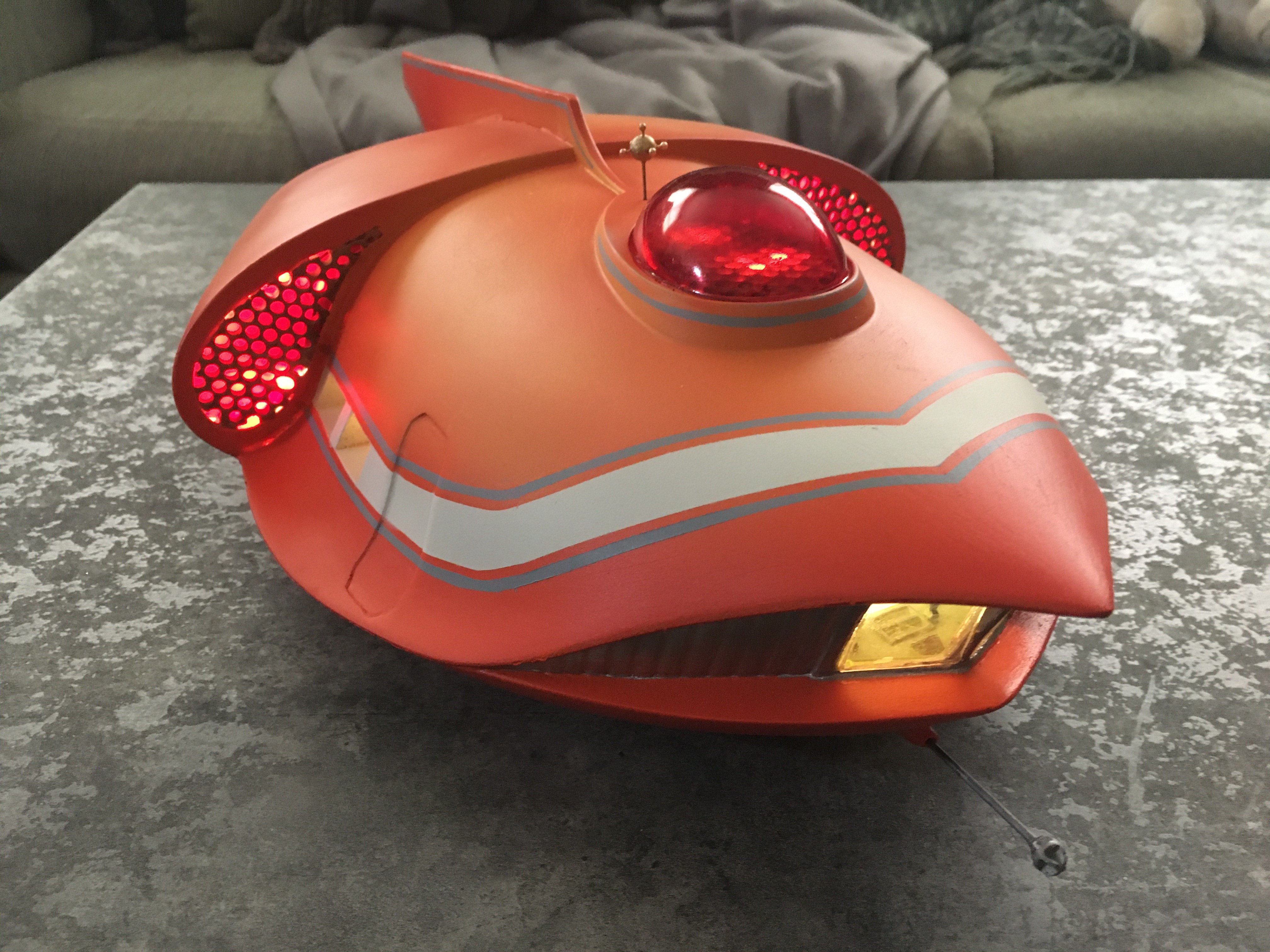 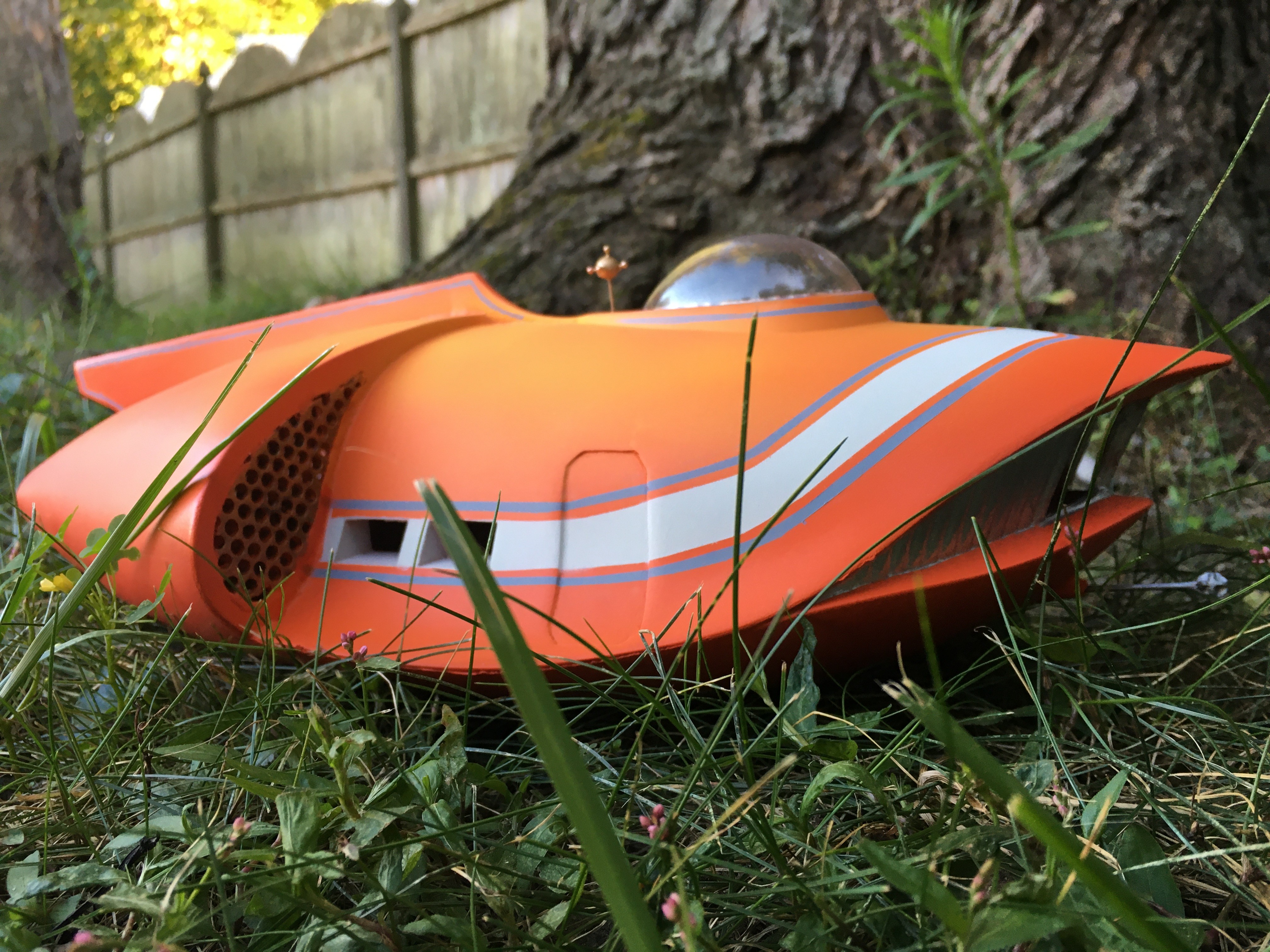 RPF PREMIUM MEMBER
Thanks to Jim Botaitis at JBOT, My Spindrift has her decals now! 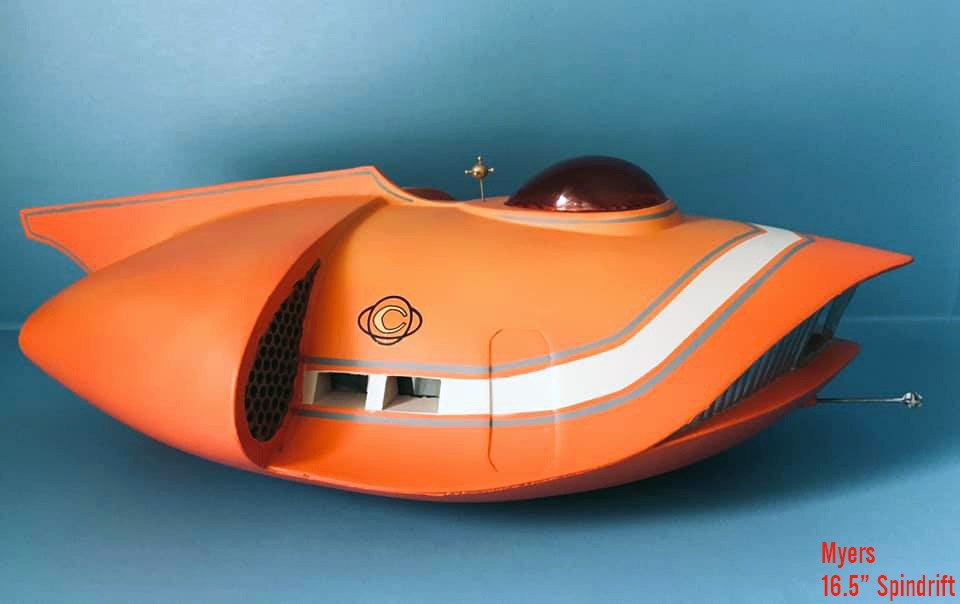 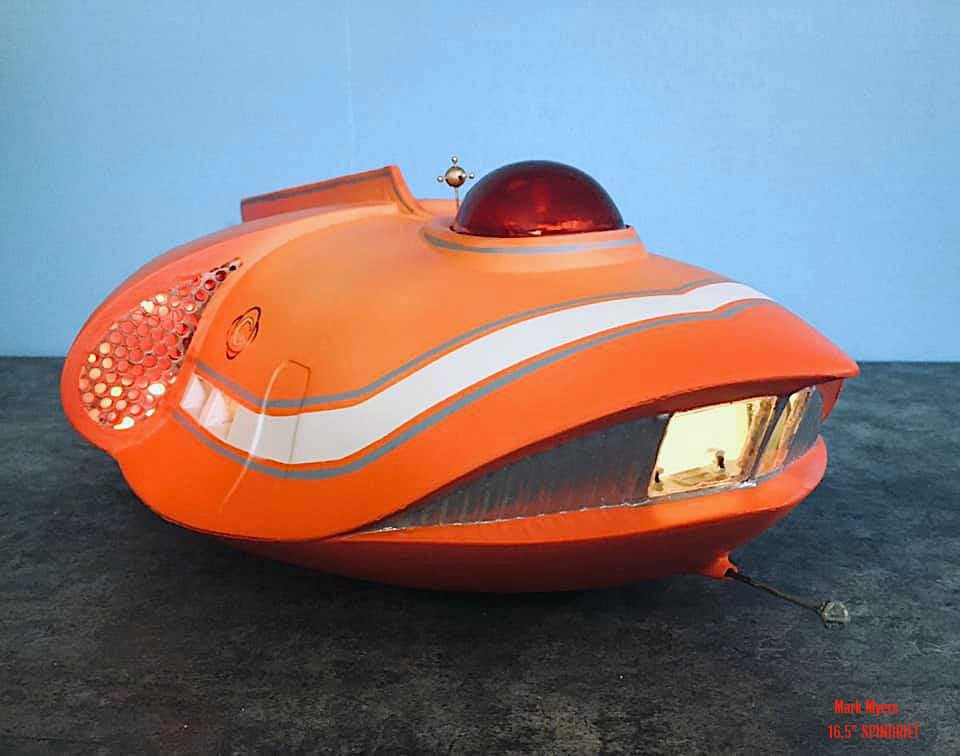 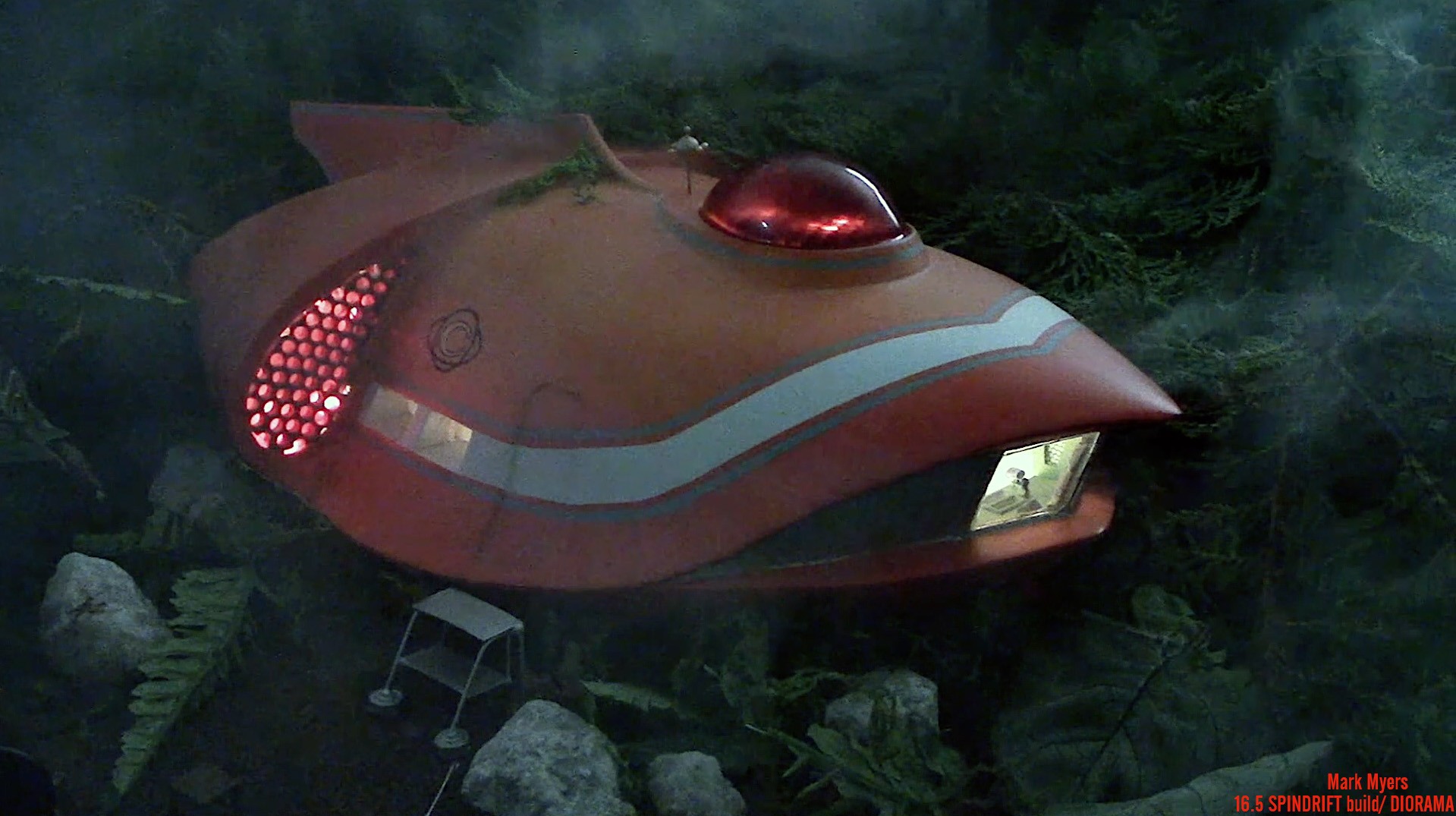 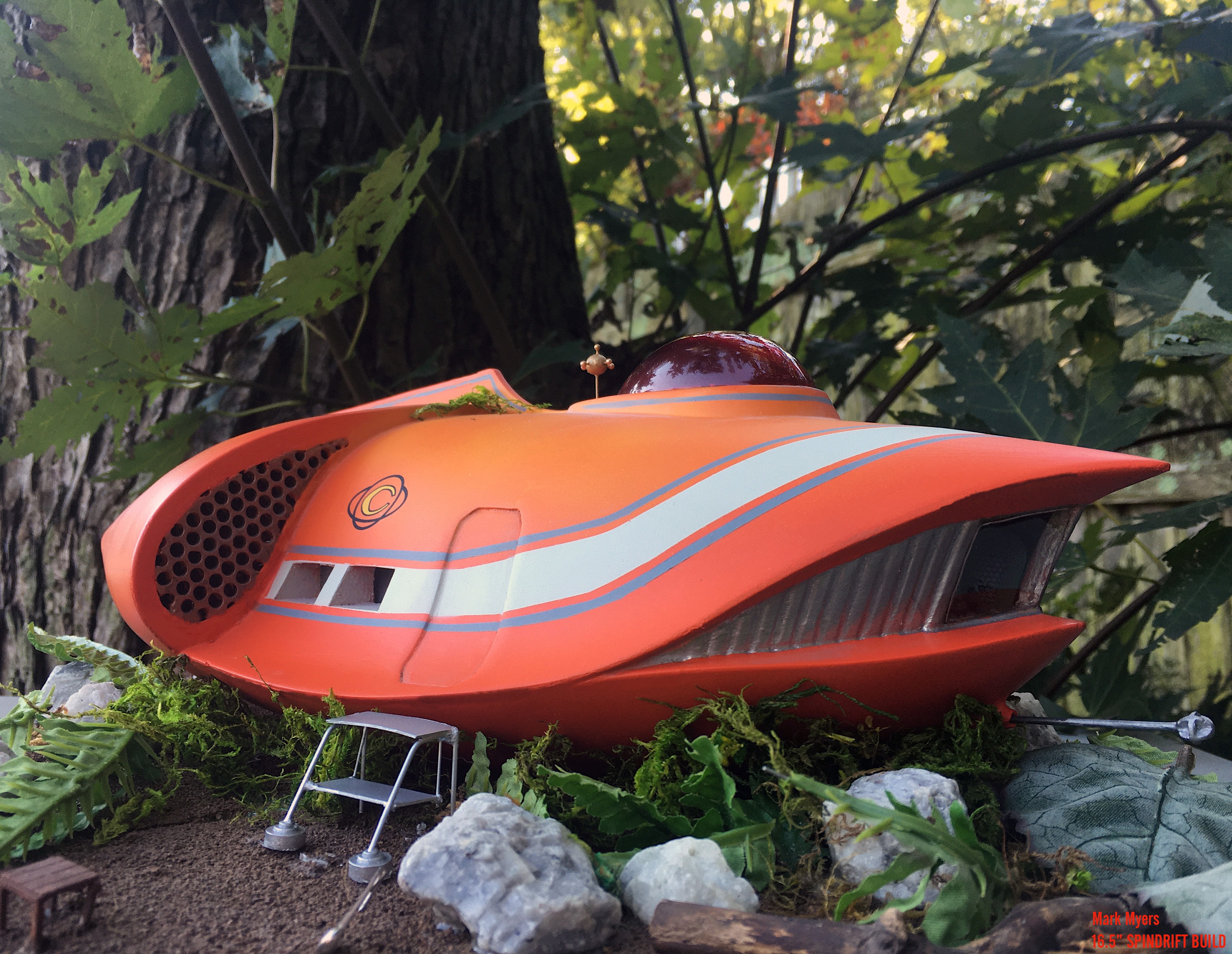 RPF PREMIUM MEMBER
Although I wanted to retain the look of the filming miniature's practical interior(It didn't have one... just a crude figure in the main viewport seen in the episode "Manhunt"), I wanted something a little more detailed.

I used some old Lunar Models Spindrift parts to present an Irwin Allen interior.
The parts do not fit and are inaccurate, however with some surgery and some scratch building, an acceptable faux interior is accomplished. 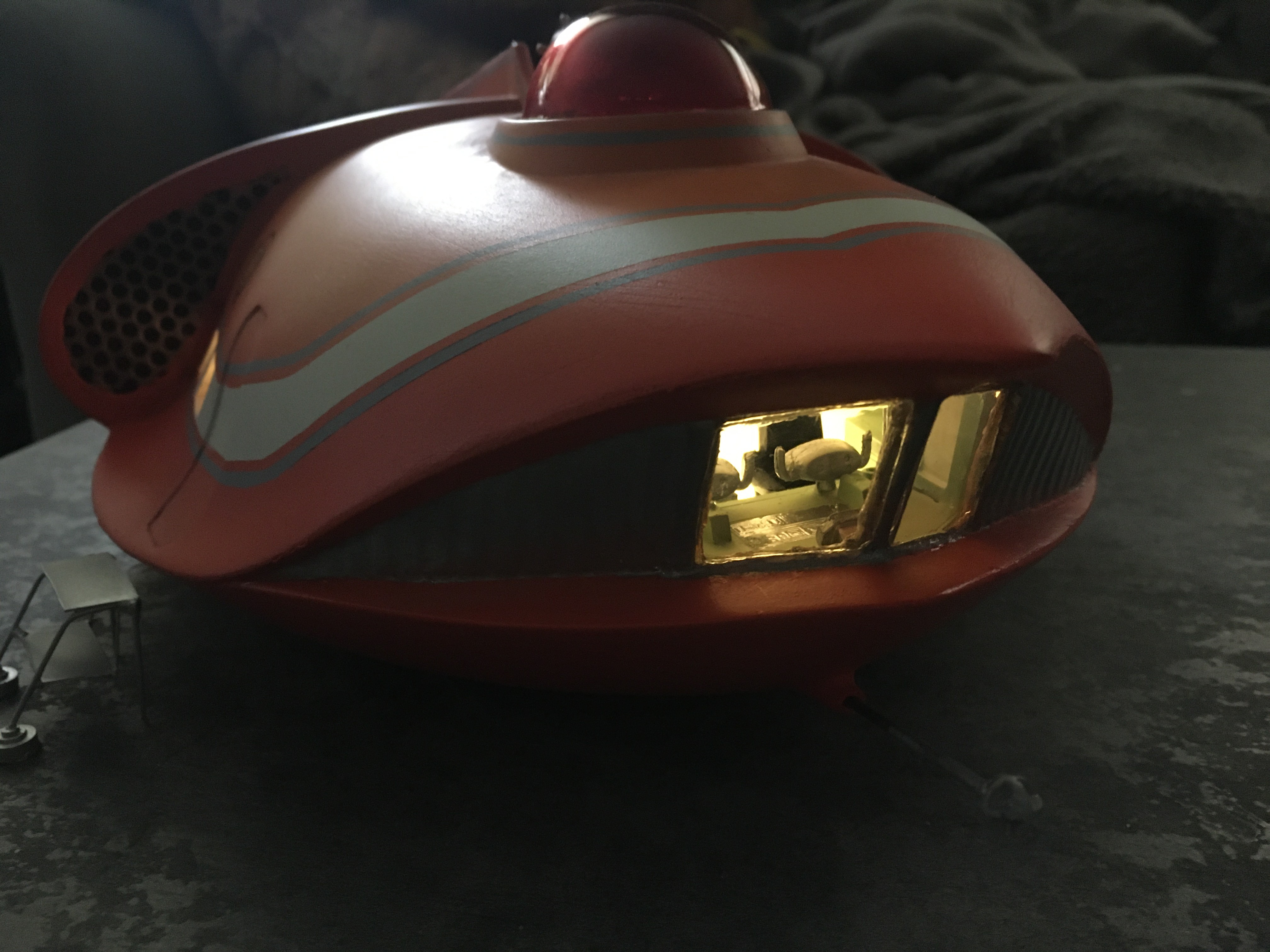 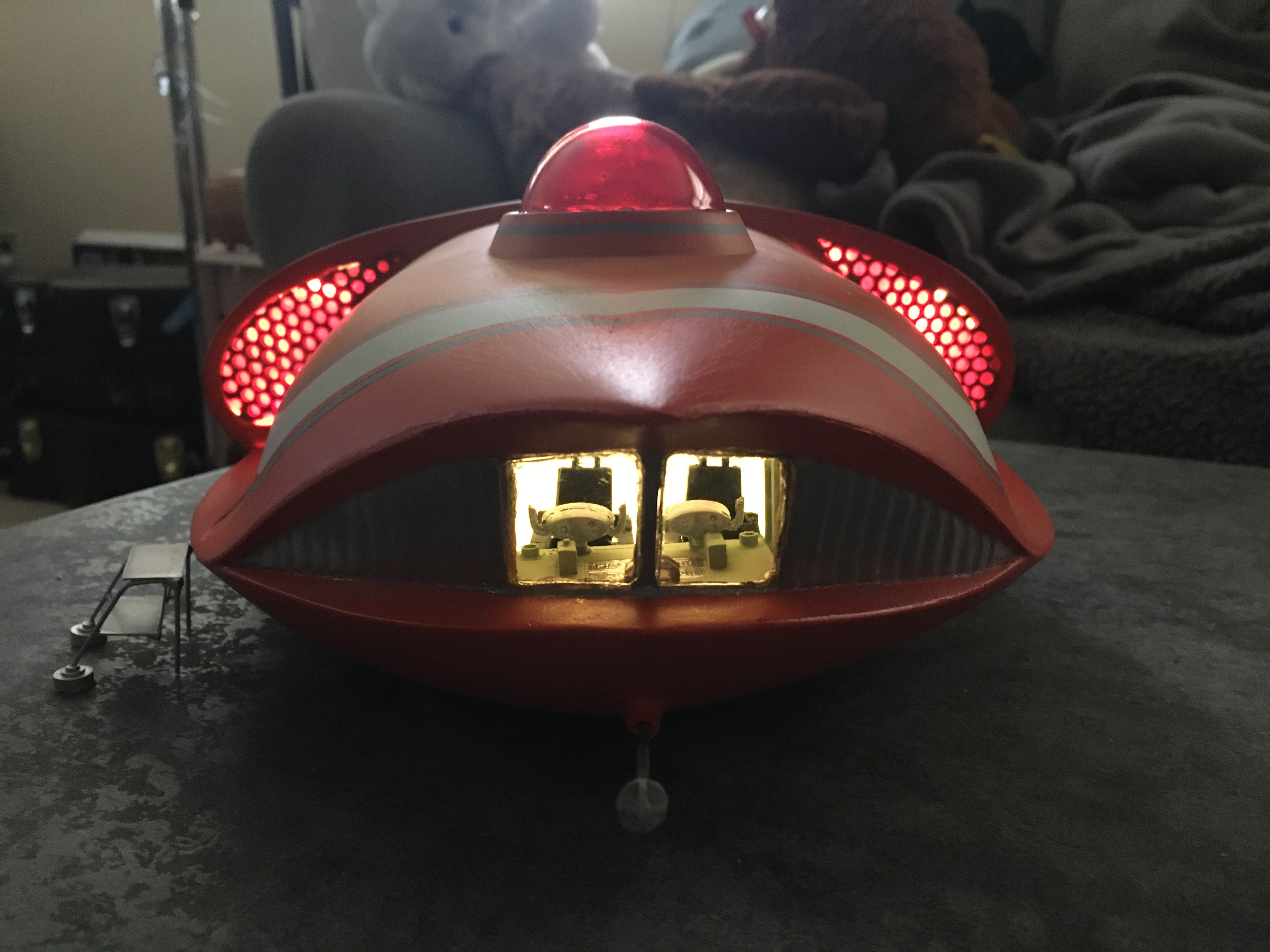 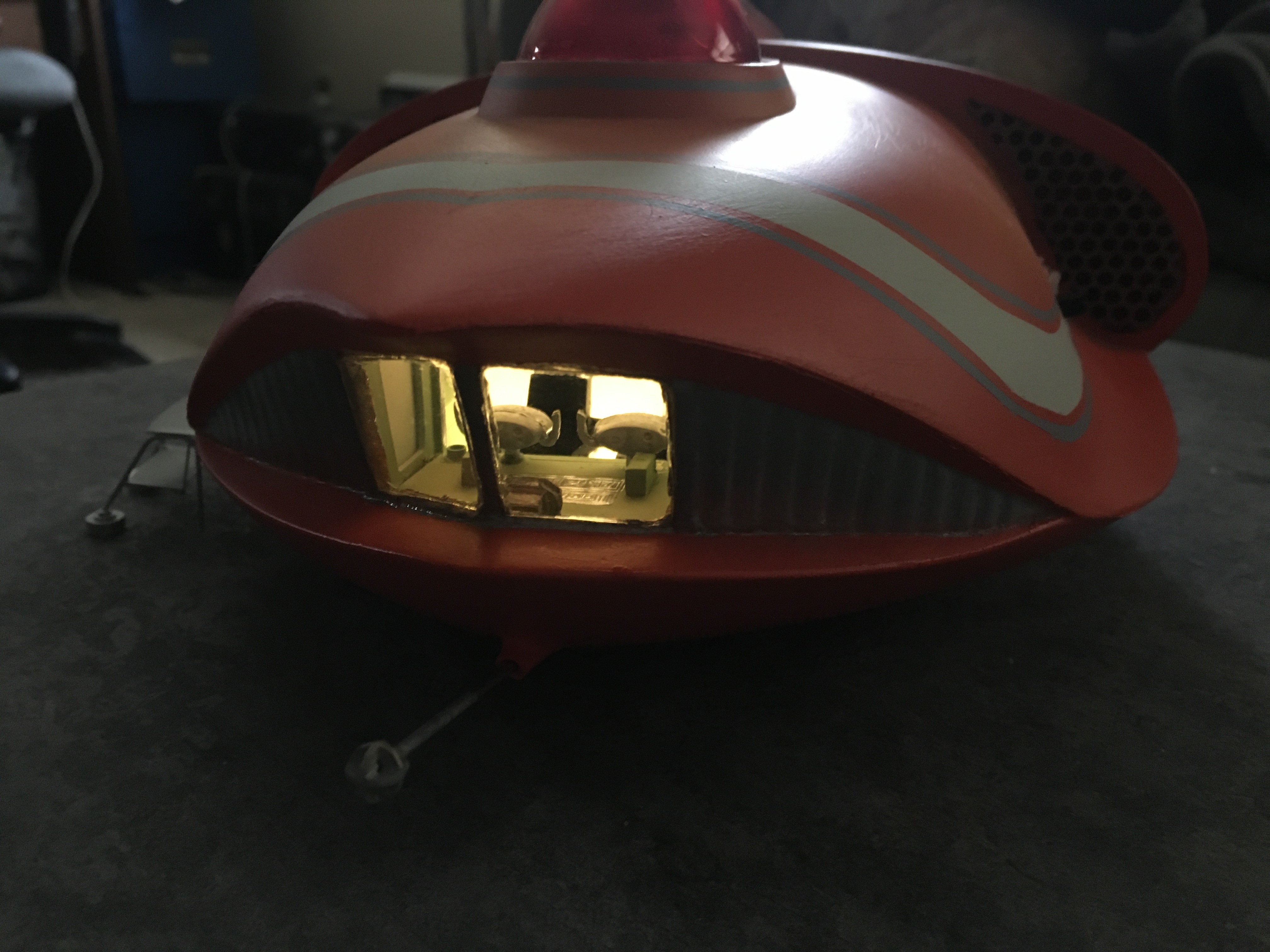 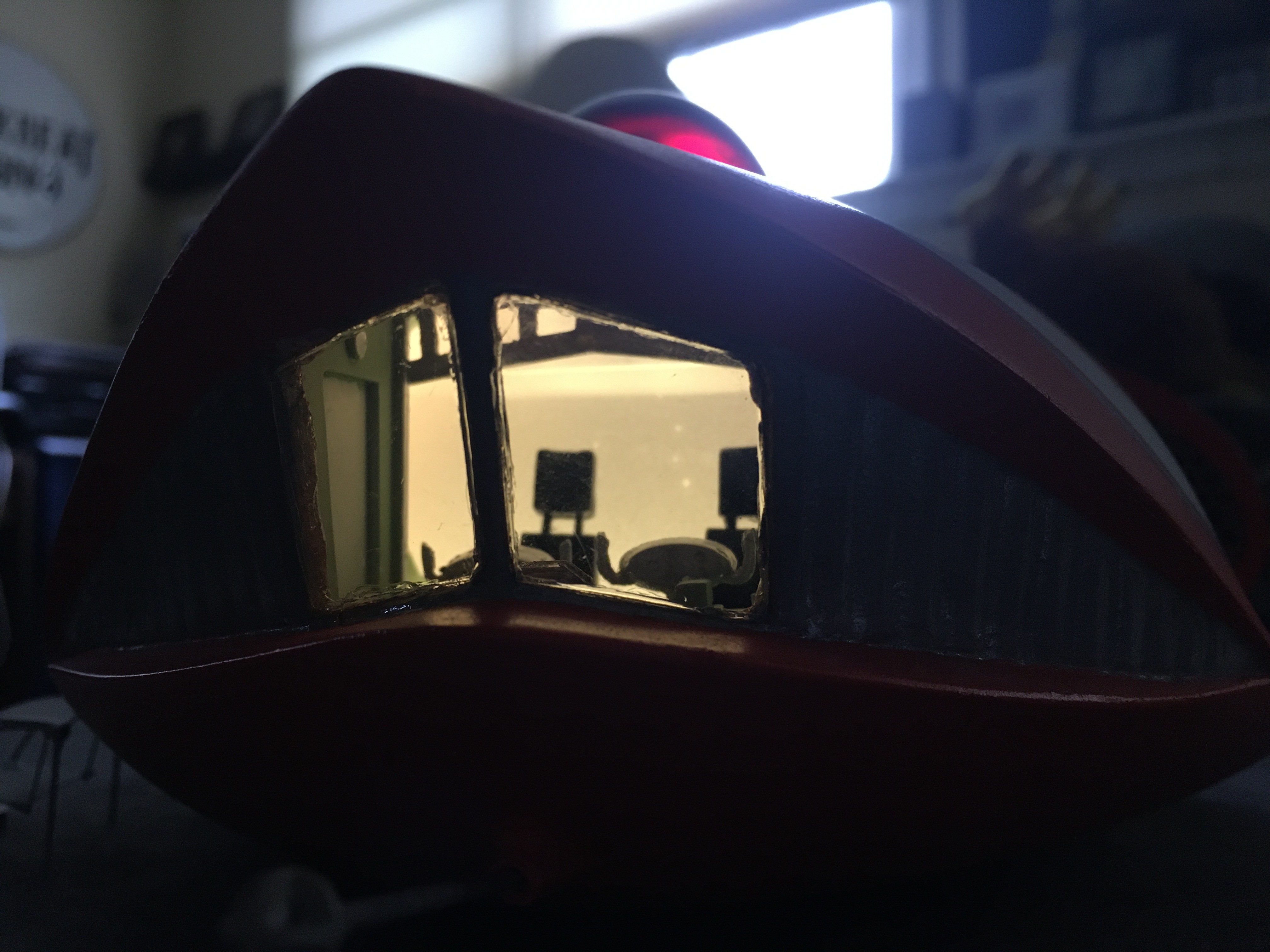 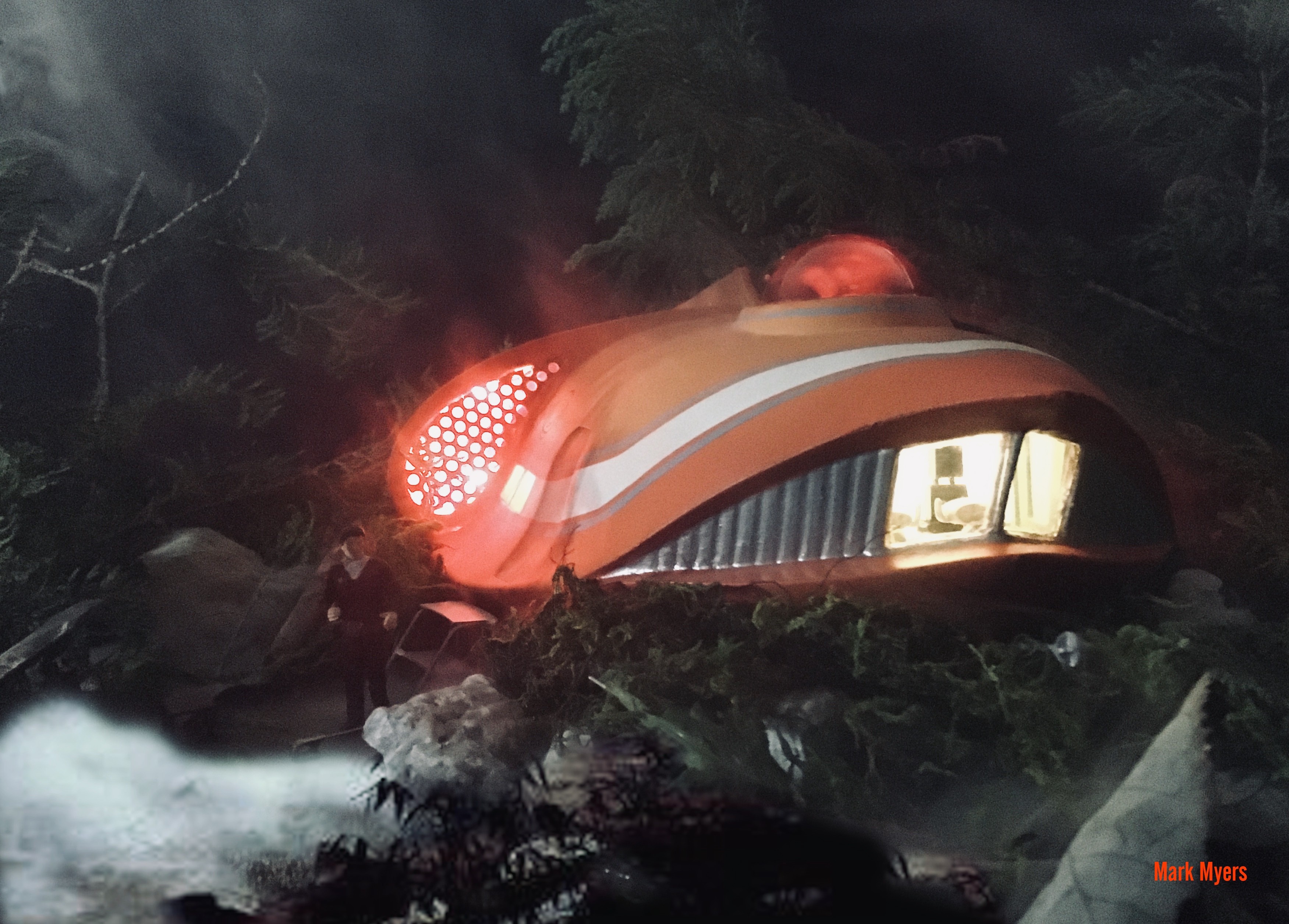 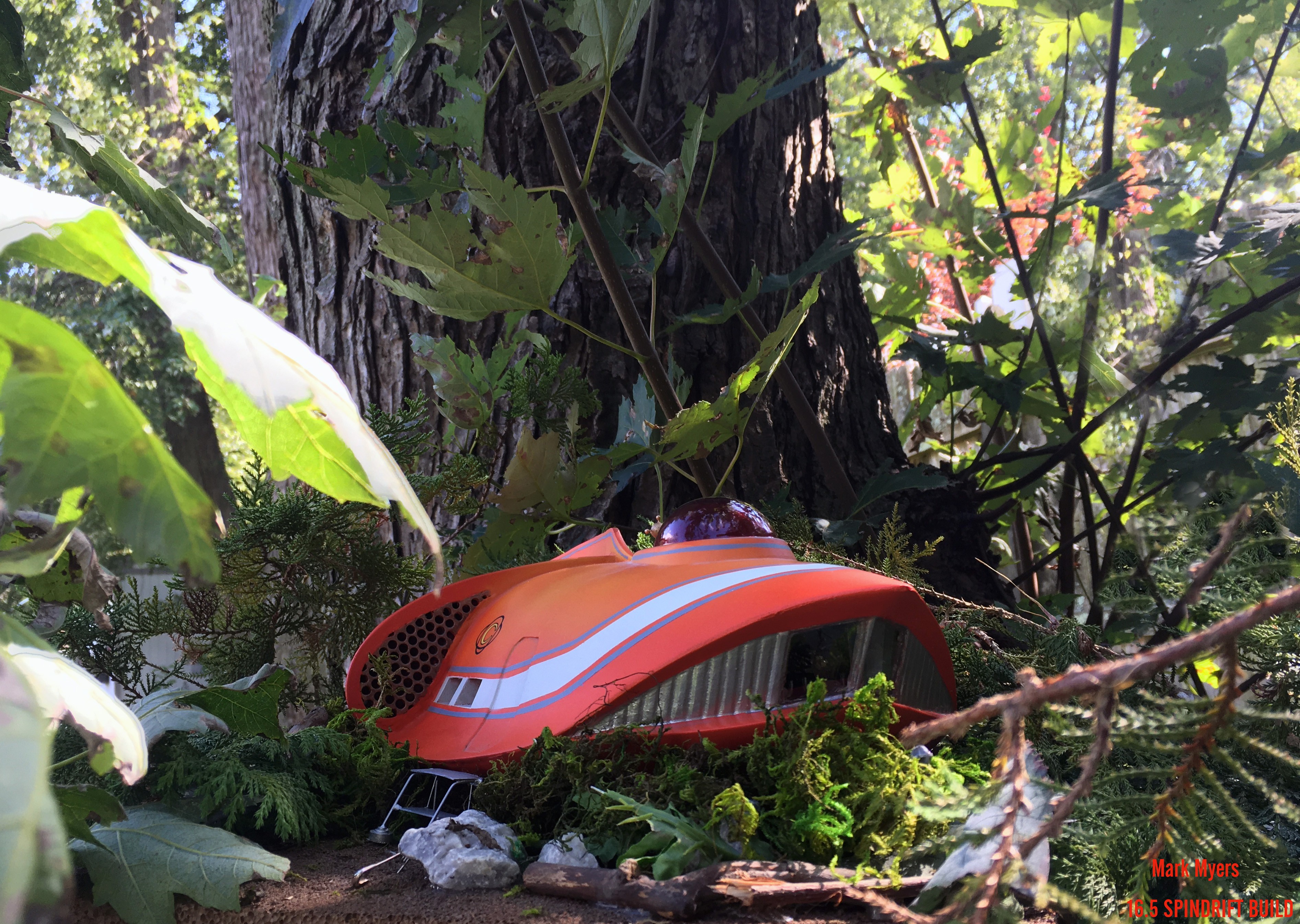 Apollo said:
Beautiful work on this!
Click to expand...

Many thanks! I sincerely appreciate it!

RPF PREMIUM MEMBER
This is SO cool! I had the model kit when I was a kid and played with it like crazy! Thanks for the memory!

RPF PREMIUM MEMBER
Having a wee bit of fun with my 16.5" Land of the Giants SPINDRIFT build.
I created a shot I wished we would have seen in the series.
Enjoy!
And Thanks!!

very cool. i had the aurora one with the snake as a kid

simiouno said:
very cool. i had the aurora one with the snake as a kid
Click to expand...

Thanks, Very much appreciated!