Long story short, 3 years ago I gave a shot to the build of a sonic screwdriver board, as I got solicited for this several times and found it would be a good challenge to see how small I could make a sound board with extended electronics, including a motion sensor, and proposing some additional interaction features:
- pitch control of the sound using sonic orientation (roll axis)
- clash / shock sound (though it's non particularly canon)
- handling of the extension / retraction of the sonic to provide both interaction AND diversity of sounds.

As a result, in 2017, I managed to cram a motion sensor, 2W audio amp, microcontroller and several led outputs into 24.5x10 mm, all this on a PCB that I could still assemble at home with my Pick and Place.

After I made 2 runs of those, I moved to a V2 version with a digital sensor and implemented some of the suggestions I got:
- possibility to drive a motor and/or an auxiliary LED
- add a PLI with a blinking led when battery is low
- have 2 variants of sounds (select upon ordering). The hum is the same, alternate sounds for lock/unlock/burst proposed and provided by Brian Uiga.

So there we are for the V2... and some V1 were still waiting in the sonic project box to be installed. I definitely wanted a sonic for myself <insert shoe maker joke here> and forced myself to complete the project with my 11th doctor sonic (The Wand company) retrofit, which I thought I would document here.

PARTICULARS:
- My board takes up to 5.5v and is happy with the typical 3.7v li-ion or lipo single cell
- My sonic formerly worked with 2xAAA (3V) with quite a low volume and I wanted to update that as well
- I used some 10mm speaker from aliexpress which fits perfectly the stock location in the sonic
- Forget about coin cell batteries (like AG3 or LR44) they will never have the juice to pull 1 or 2W of audio

Disassembly of the sonic isn't too difficult BUT the main trick is to know that 2 of the copper tabs are glued in place and those you need to pull out so that you free the inner green plastic core from the copper cage. Once that's achieved, you can remove all the electronics. I drilled the small riveted axis of the 4 end-jaws, you can replace them with button-head screws (M2.5) after taping the jaw fork (which I have yet to do). 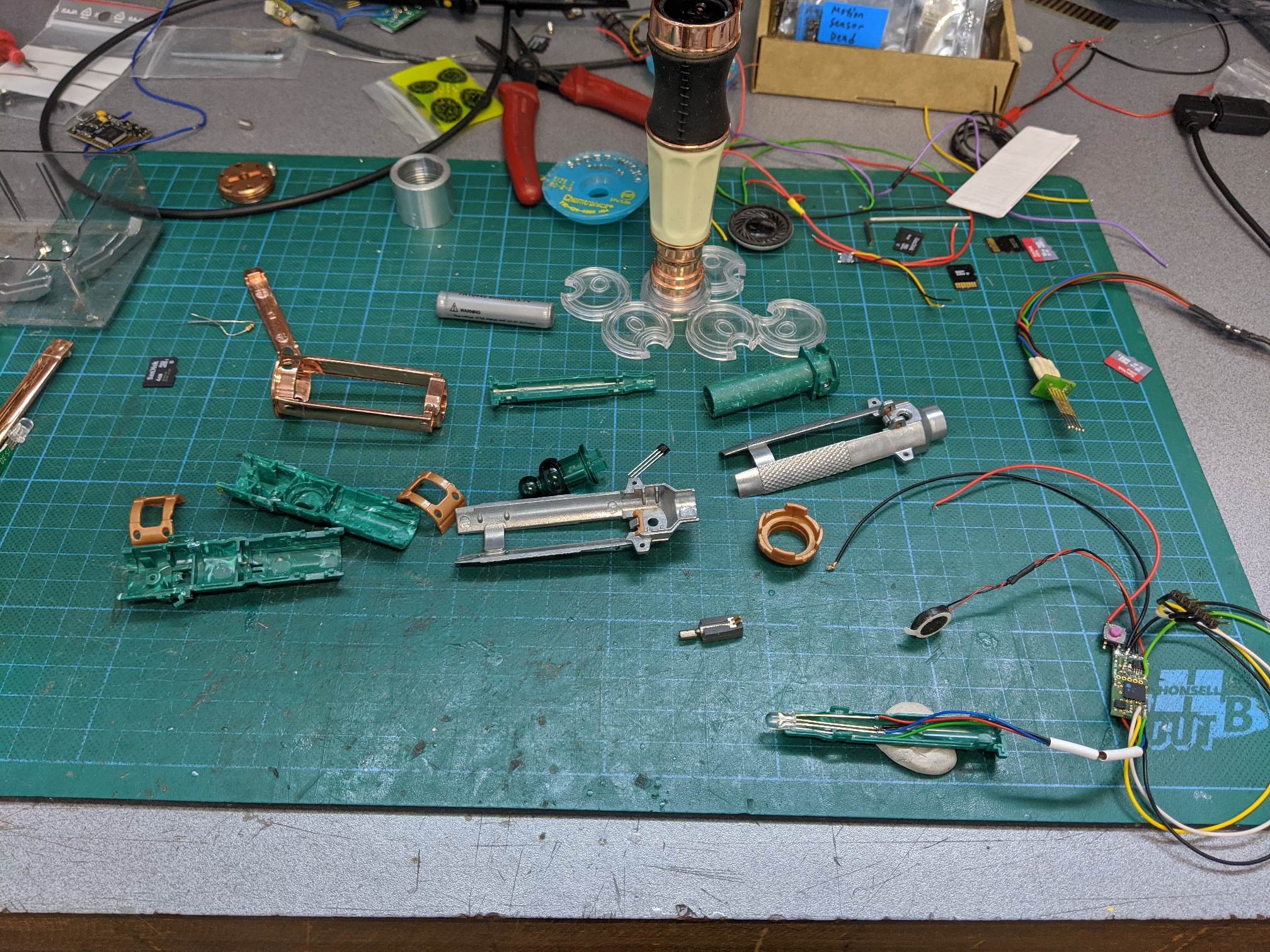 I started by installing a RGB LED in the front nozzle after removing the stock electronic board. I used a common cathode RGB LED since my board powers from 3.3V led outputs. The board has footprints for installing 0603 SMD resistors (they will come with the board). They aren't installed since there's no per-required color mapping for the led channels. The RGB led (5mm) is exactly the same size as the stock LED which combines visible LED + IR (TV remote)
I went for the main led as Green (my sonic core / head is green), the auxiliary led is blue and the low power / PLI blinking led is the red one. I also have a 1v rumbling motor attached to the auxiliary channel which shakes the unit a bit when unlocking the sonic or clashing it. The motor also gets installed in the nozzle 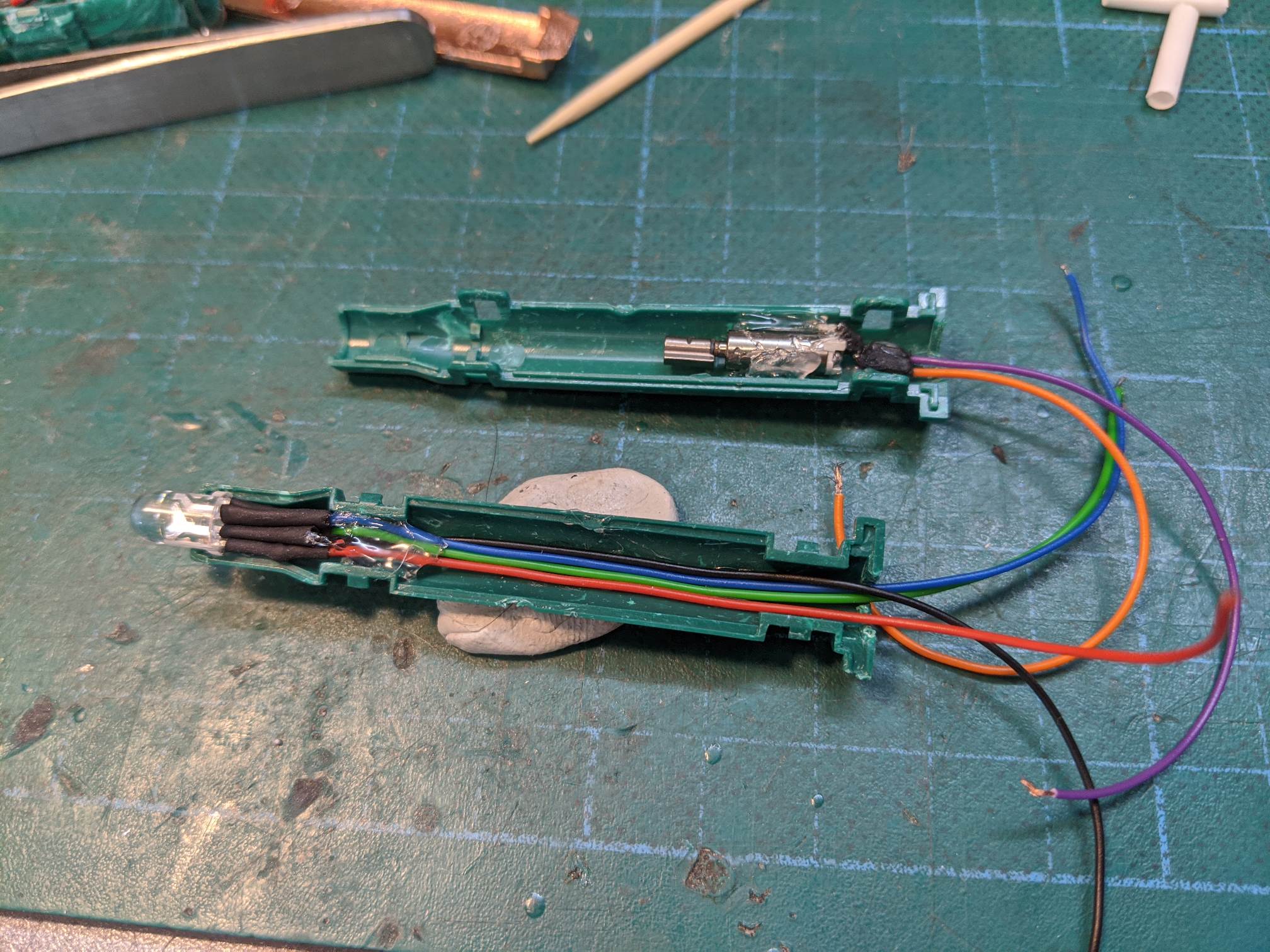 For the extension/unlock mechanism, I wanted something wireless and opted for a Hall sensor, installed in the nozzle, with a piece of thin neodymium magnets attached in the sliding piece of the core with epoxy. When the head is extended, the magnets activates the sensor. It's an Allegro digital Hall effect sensor, behaves like a switch and emulates the auxiliary (mechanical) switch. You can spot it below next top the yellow wire (sharing a common ground with the RGB led to save up on the nozzle wiring, to ensure the rumbling motor weight can still spin free). 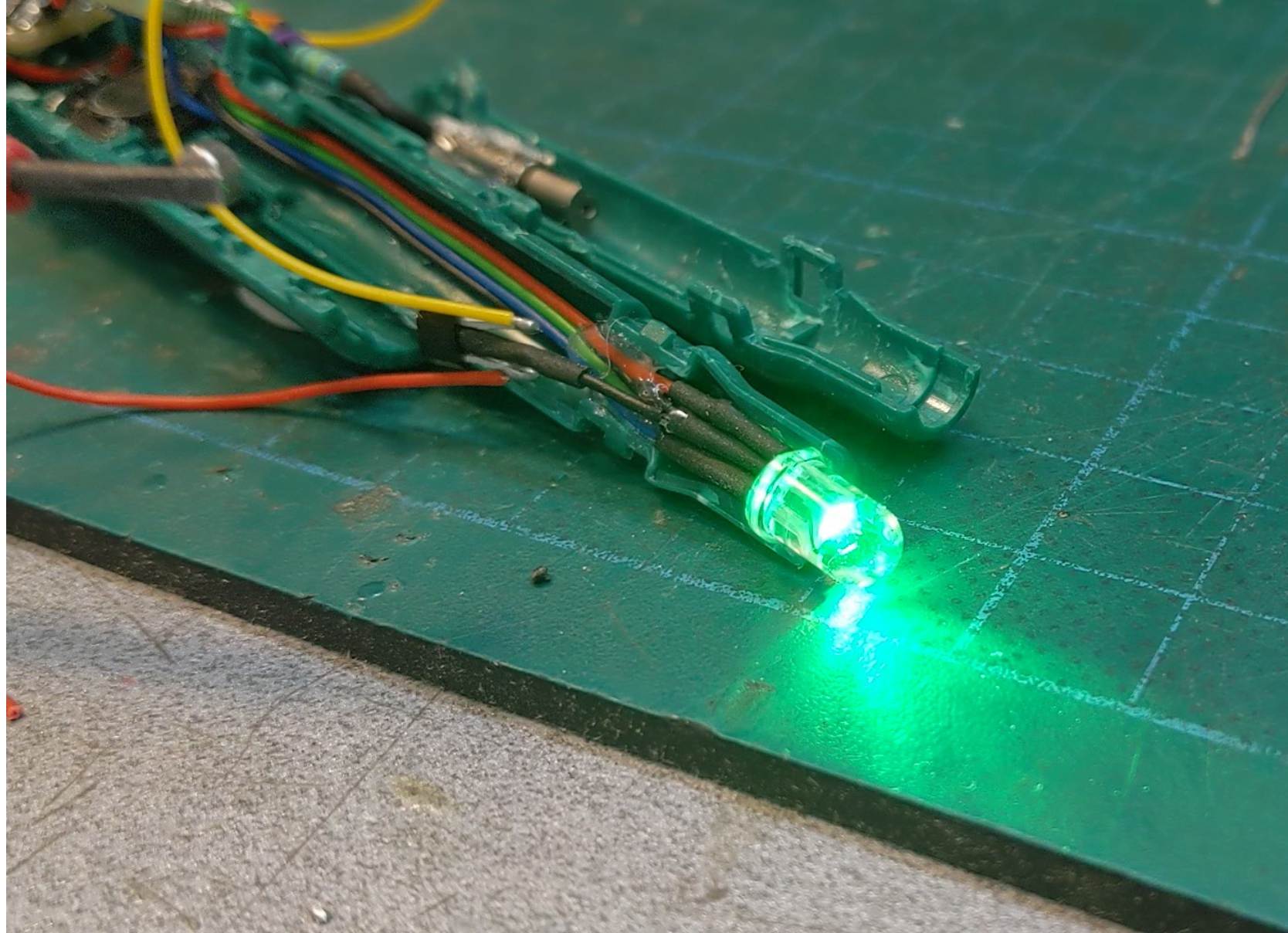 No crazy mods in the sonic body to fit the electronics. The stock board was attached to the negative (spring) of the battery so I made a small PCB out of perfboard to keep this and glued it in place, preserving the spring-loaded mechanism that connects the 2 sonic halves (twist-lock). 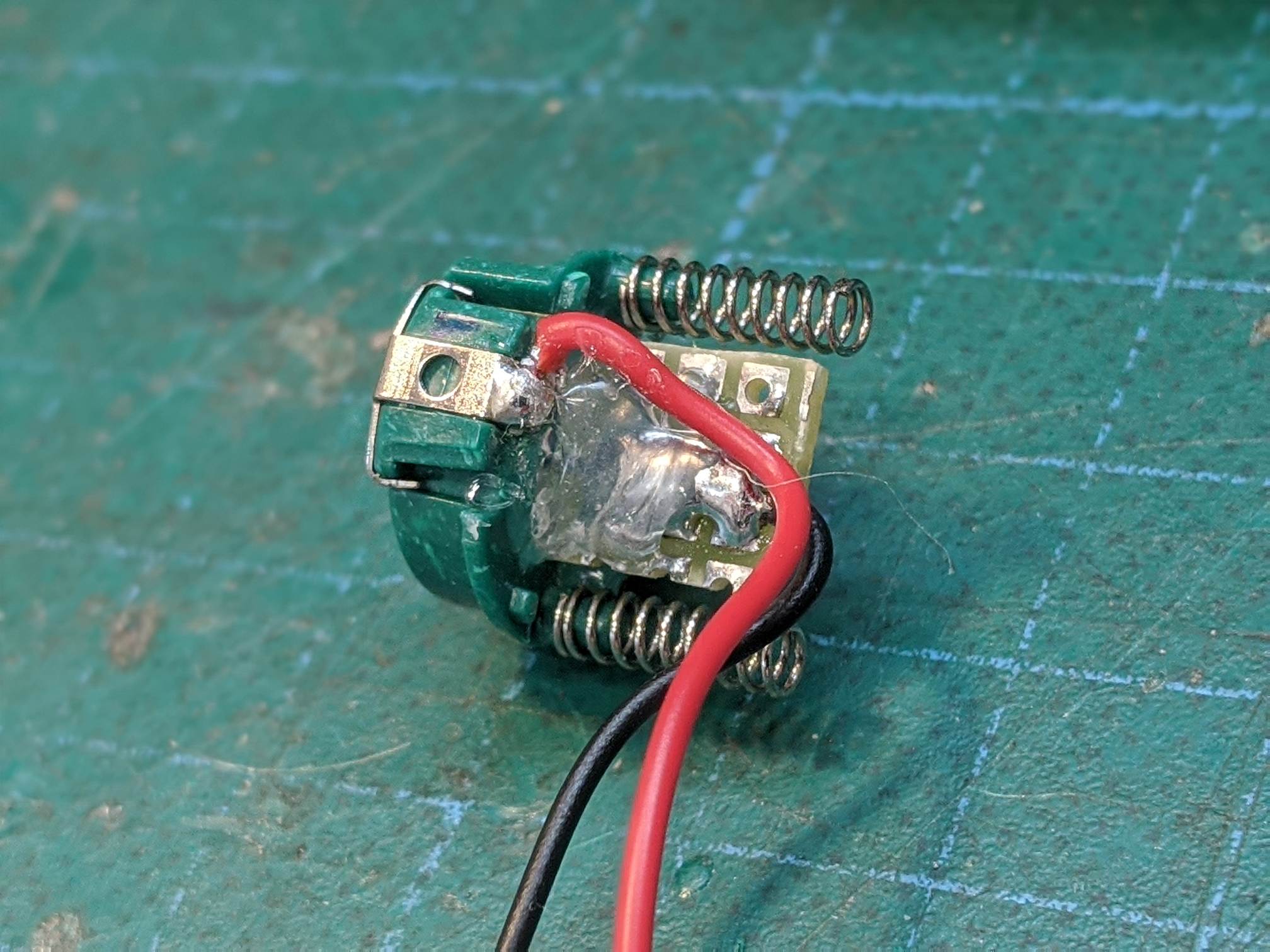 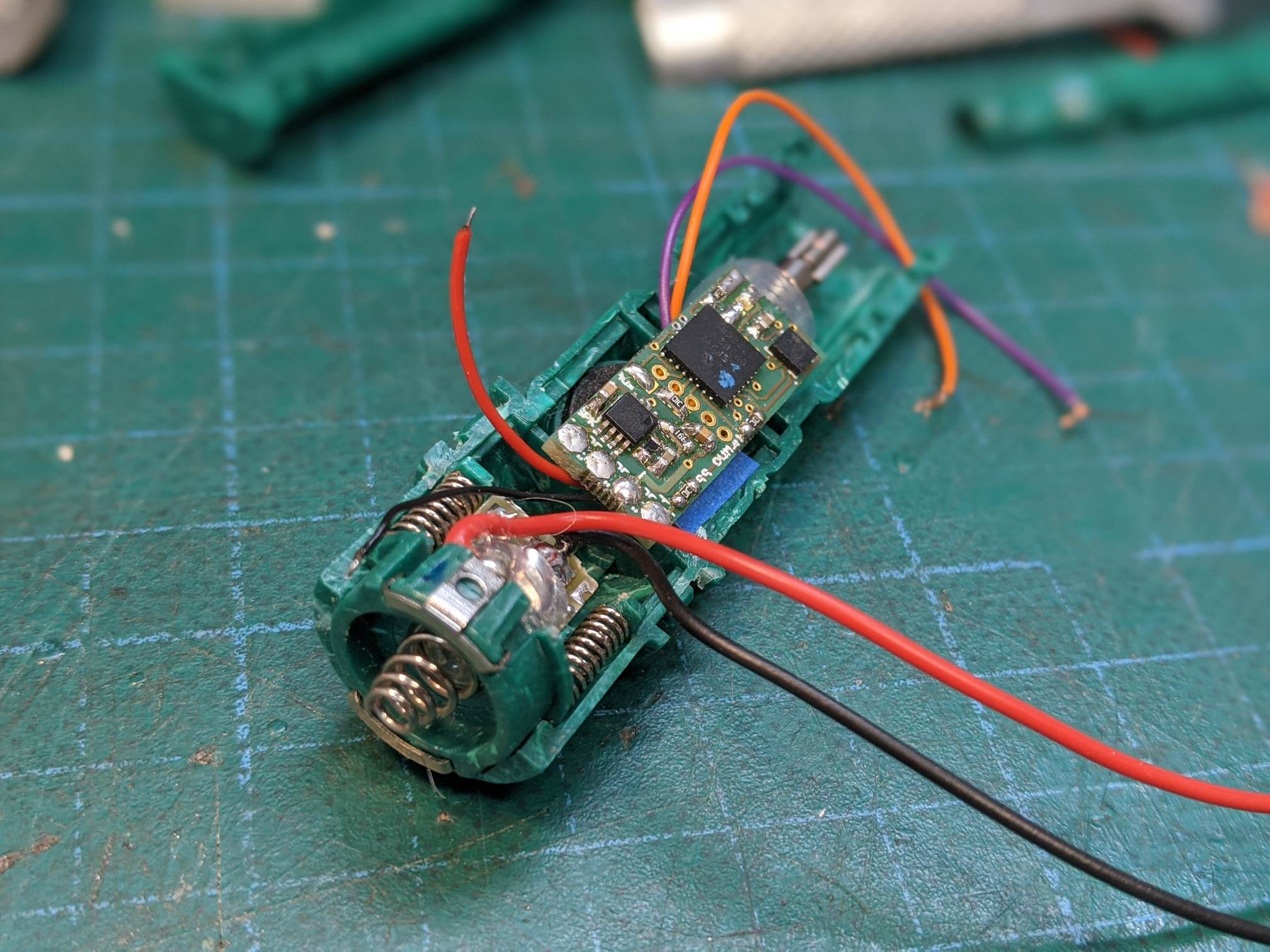 The whole thing in place, all wired-up. You can spot the dark grey area of the moving sleeve and the piece of magnet 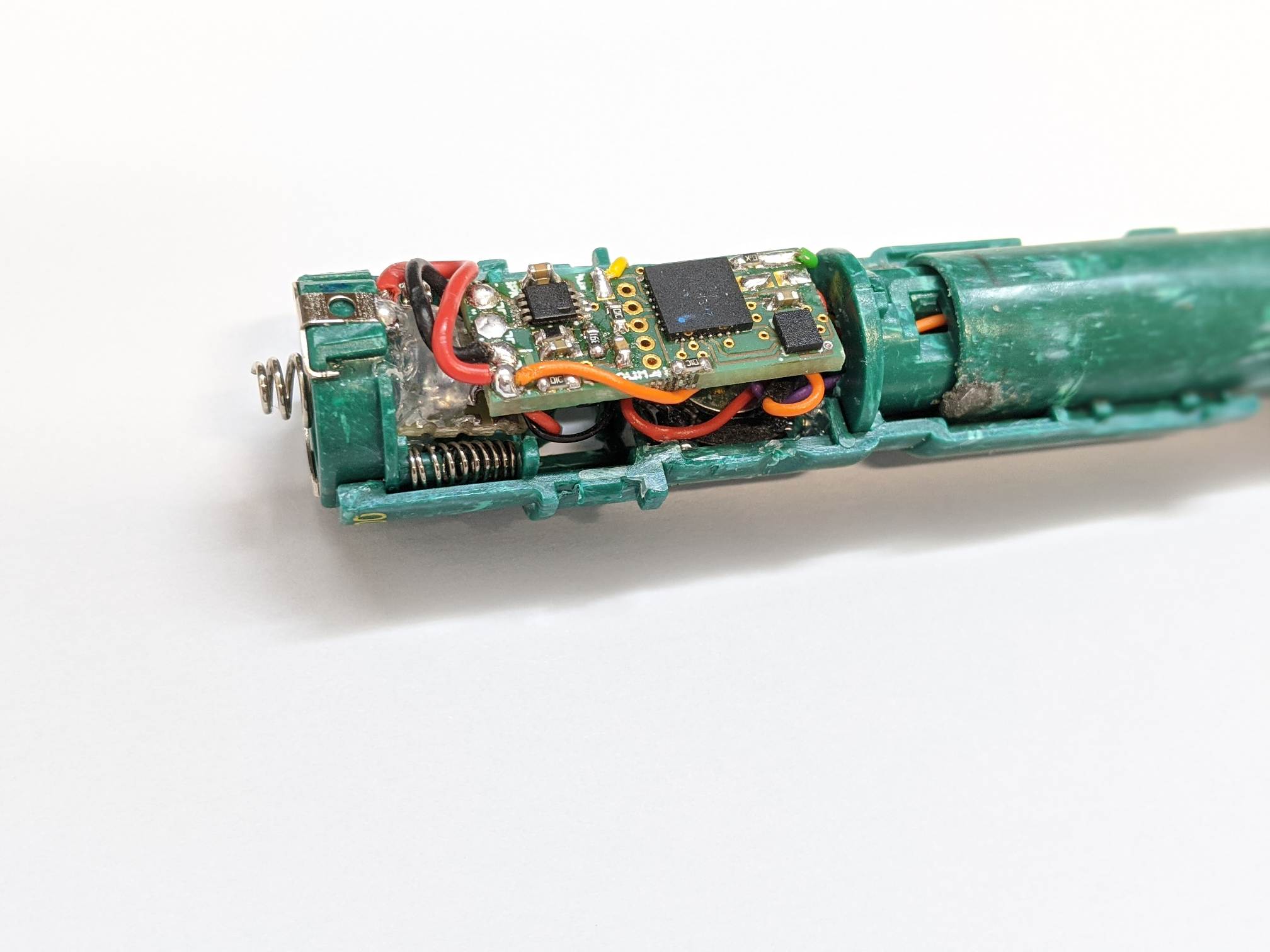 Sonic reassembled, you can spot the blue auxiliary led that mixes up with the green one, in extended/unlocked mode 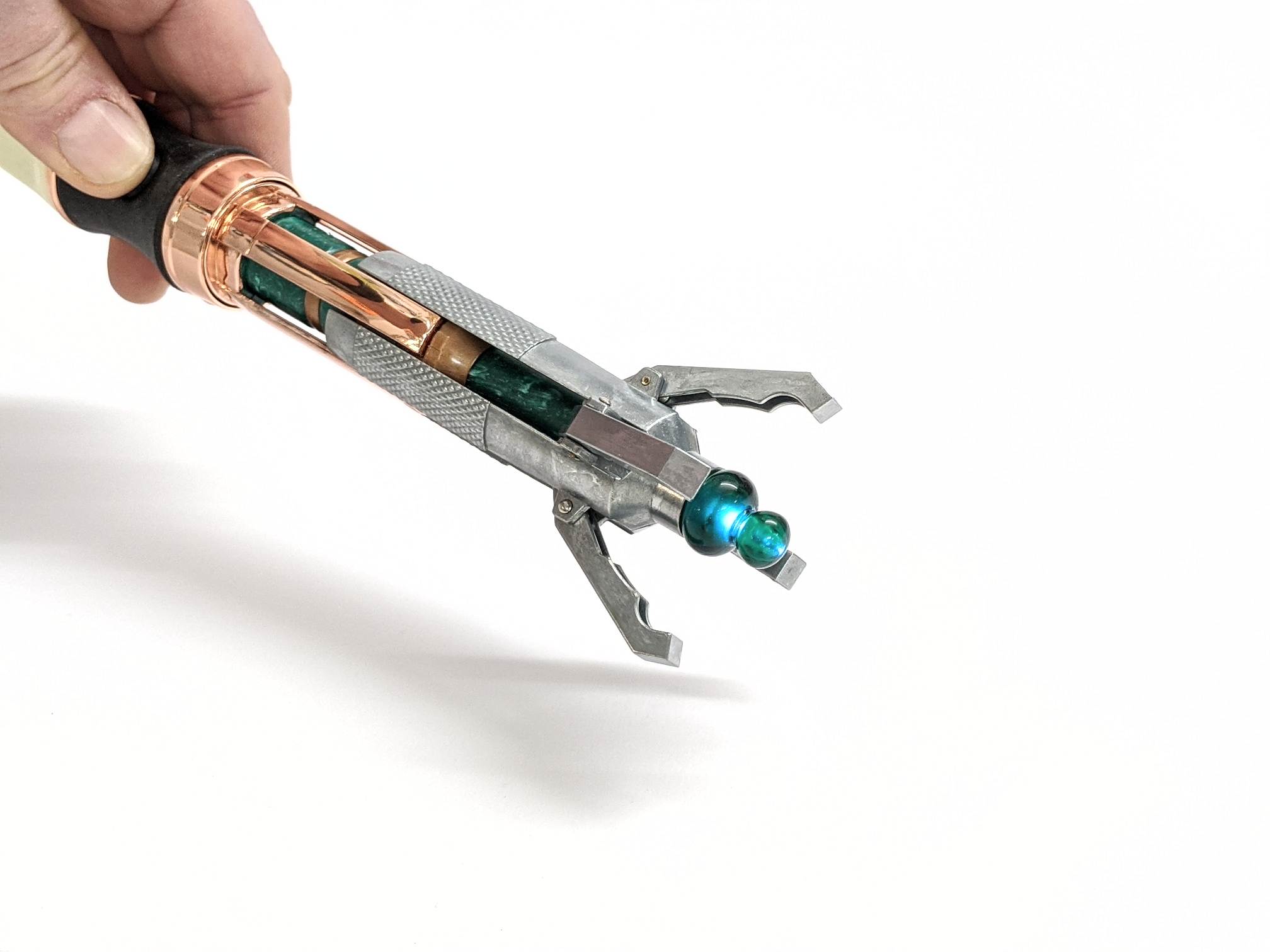 Power supply side, I'm using a single 10440 cell (protected), 3.7V nominal (AAA sized). Since the sonic body has room for 2xAAA, I machined a dummy AAA with my lathe and a PVC rod, drilled it in 3mm to install a M3 threaded rod that slightly sticks out of the dummy battery body to make the positive. The negative is a M3 (screwed in the threaded rod) nut offering a larger butt surface like a regular battery.

Full demo to be posted later once I've finished editing the video ! Thanks for reading, any questions, just ask. This is not a sales thread but just as an indication, I have a batch of 50 of them which just needs firmware flashing and they should be available later this week (I'll relay that from FB)

and video to be premiered later today (once everyone wakes up !)

Wow! This is so cool! I've been scouring this forum to see what sort of things people have been doing with Sonic Screwdriver electronics and I have to say this is by far one of the coolest things I've found! Nice work!