Long time lurker and felt this would be a great place to share a project that has been in the works for awhile.

Hope you enjoy the pictures and enjoy hearing about my journey.

From concept to reality, I have had this project in the works for about 2 years..

It all started when I came in contact with Ross McDonald, who made the props for the National Treasure Book Of Secrets film.

Ross made the presidents book and the booth diary for the film.
He agreed to make me a production copy of the booth diary seen in the film. It took a few months at the time of ordering a few years ago, maybe 4 years ago now, to make it.. this is the diary I received from Ross pictured below. 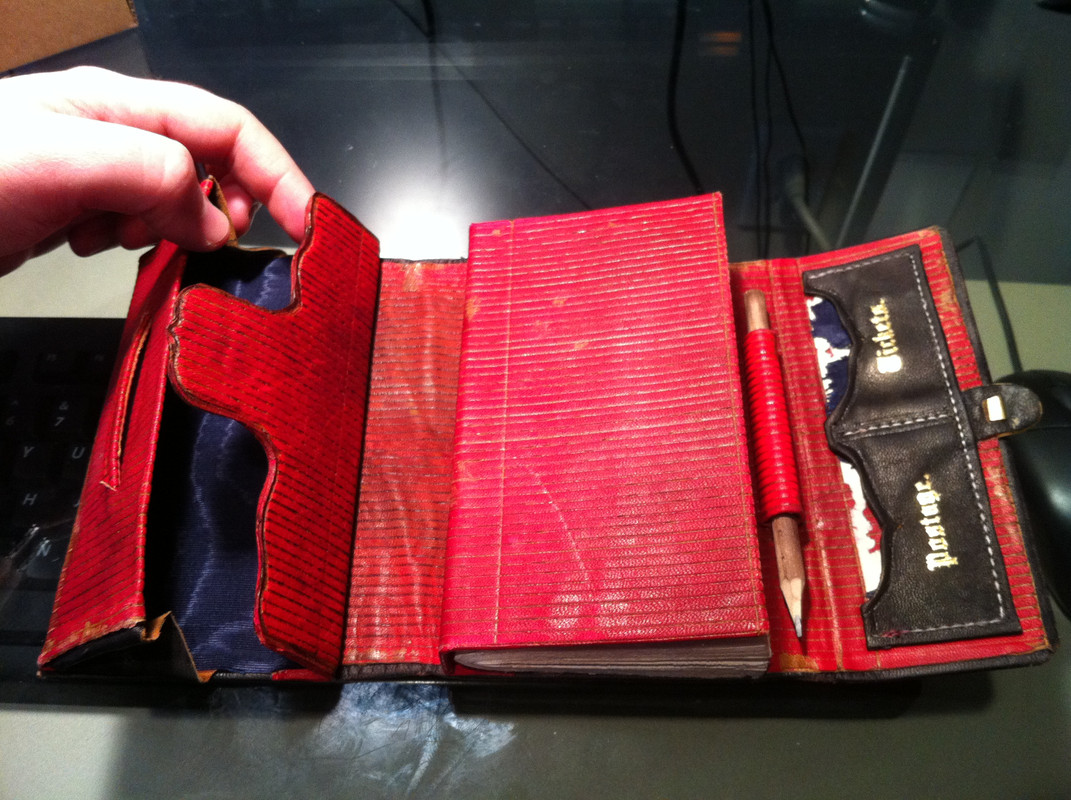 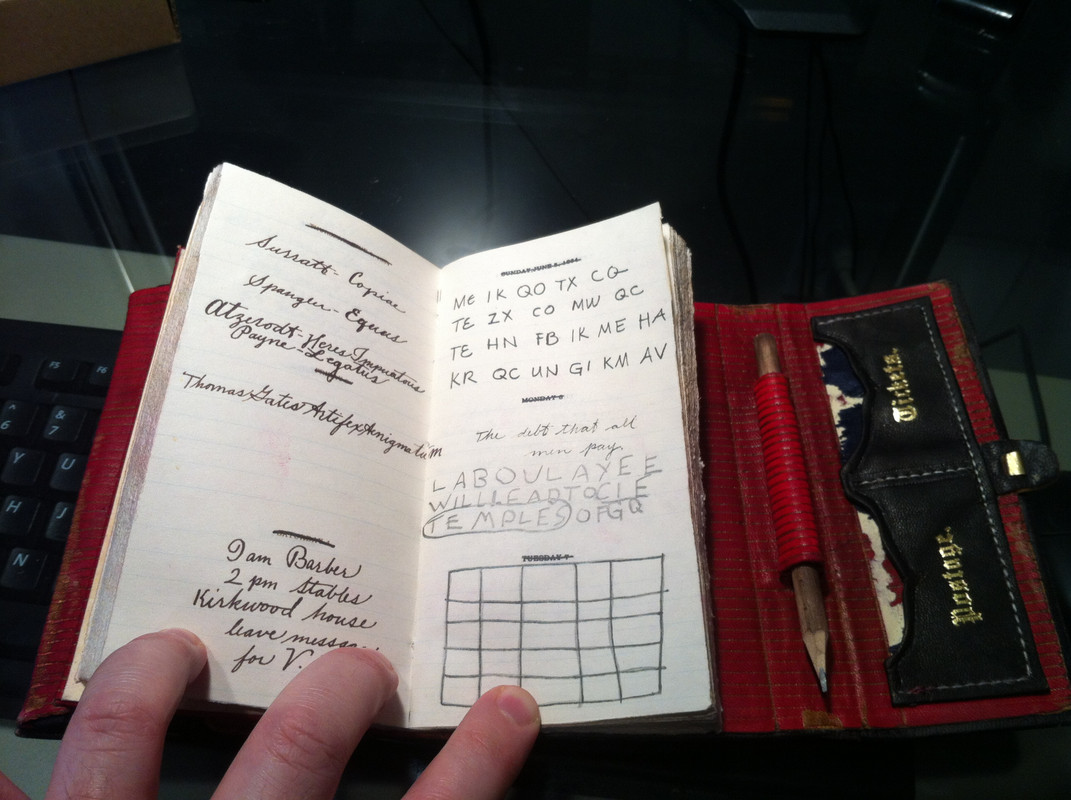 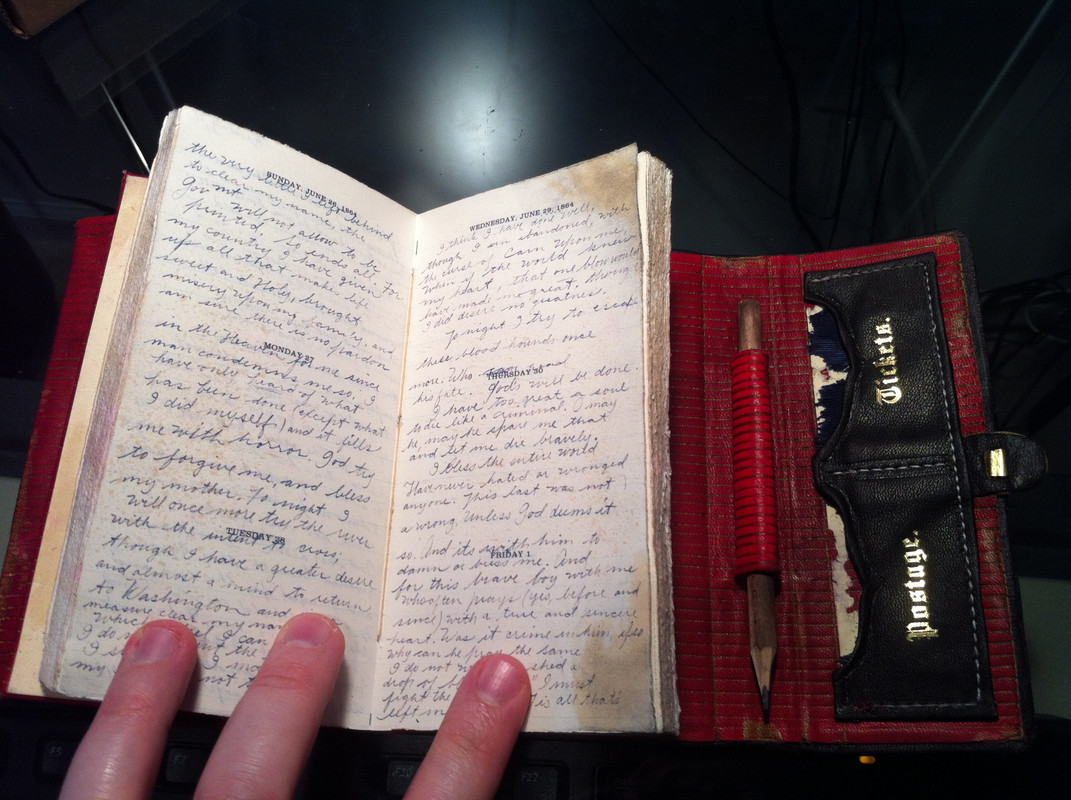 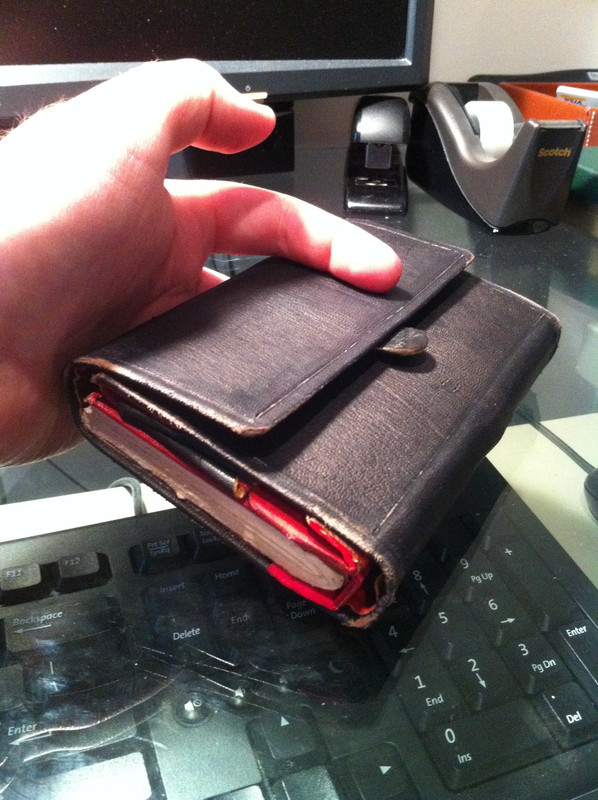 For a short period, I was fine with the movie production replica, but it had it's issues.. Aside from being very expensive, it was a prop, not something that could be used on a daily basis.. The way it is constructed is not the same as a period diary would be. also, the red dye he used would bleed from the leather and come off on my fingers, it would also get onto some of the pages of the diary itself. So for these reasons, it's more of a display piece. To date, Ross McDonalds diary made for the film is the closest replica ever created. Despite some of the sloppy tooling in the leather, it is still the best, up until now.

There is another replica that was floating around awhile ago, I know the person who made this replica, based it off of Ross McDonalds copy, as he to owns one of Ross's booth diary's. It is a very nicely done diary, but again, not 100% close to the original. picture below. 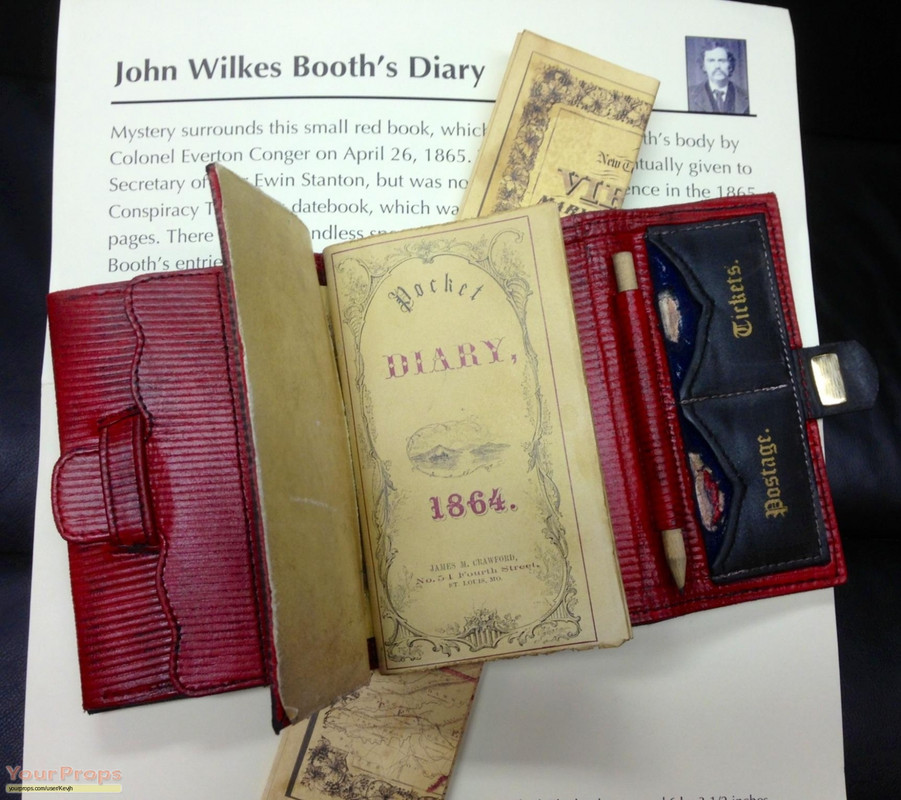 So I began to think long and hard. What if no expense was spared? What if I tracked down the best leather worker? What if we were able to pull some strings and obtain never seen before images of the real Booth Diary from the Fords theater that would allow use to study it from all directions, front, back, opened, closed etc..

The project is finally complete and the results are stunning. I wanted to share it with everyone here.
This is a 1 off project and its not for sale. Due to the time, labor and money involved, this will never become a mainstream production item unfortunately.

one of the biggest mysteries about the booth diary is the closure. From original photo's published on the web of the booth diary in the open position, it's clear that there is a tab with a small brass fitting embedded into the tab. The Prop Maker Ross added this brass piece, but his copy wasn't able to stay closed. There was no clasp.

The original booth diary had a clasp. Many thought the brass piece on the tab was just a flat piece of brass, but upon further studies, the original showed that the flat piece of brass on the leather tab, was actually a hook at one time, but due to age and damage the brass had actually been bent down into the leather tab. Which is why Ross and others thought it was just a flat brass piece of metal.. So the clasp was actually a simple hook catch style clasp at one time on the original..

What's nice about my copy below is that it has been designed to be able to be used on a daily basis, as it is constructed using the same methods as the original booth diary of that time period.

the original most likely had a huge dye press to emboss the lines in the leather, but since this is a one off piece, the lines had to be embossed all by hand, one at a time in a custom made jig for accuracy .

I chose to make the diary in "new condition" instead of distressed. I figured over time it will naturally distress. So in reality, this is what the booth diary looked like when it was new back in the 1800's..

The pages are filled out with all period correct print that would be in a diary of that time period.

below you will see pictures of the multiple test books made for size and for function purposes. 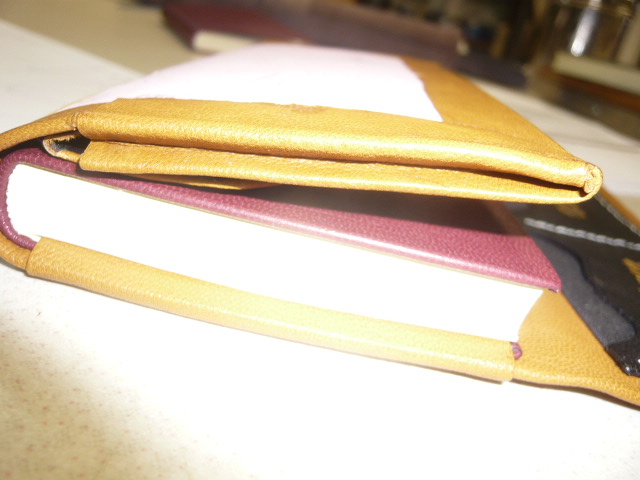 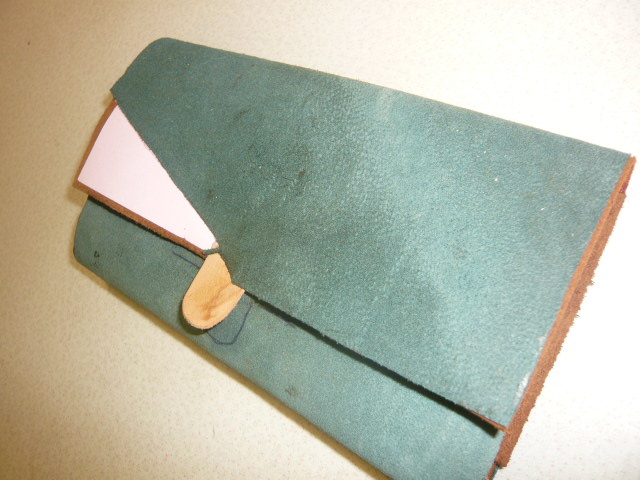 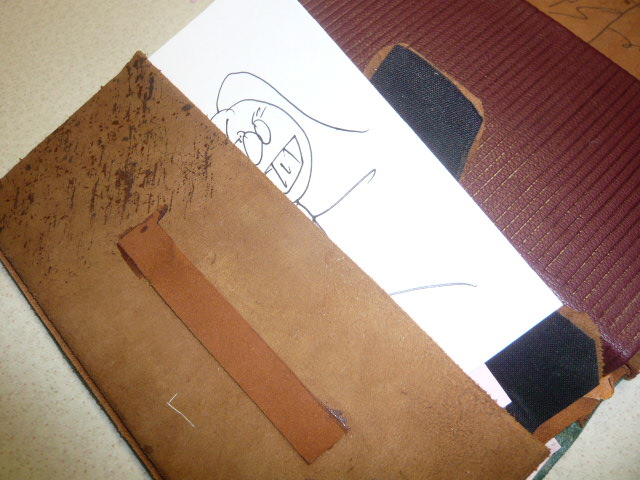 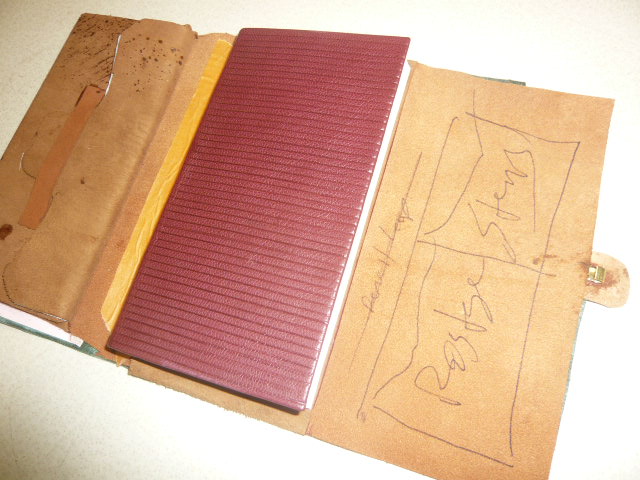 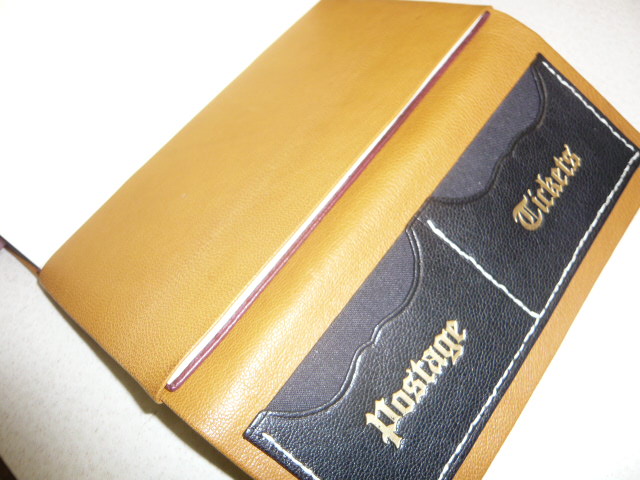 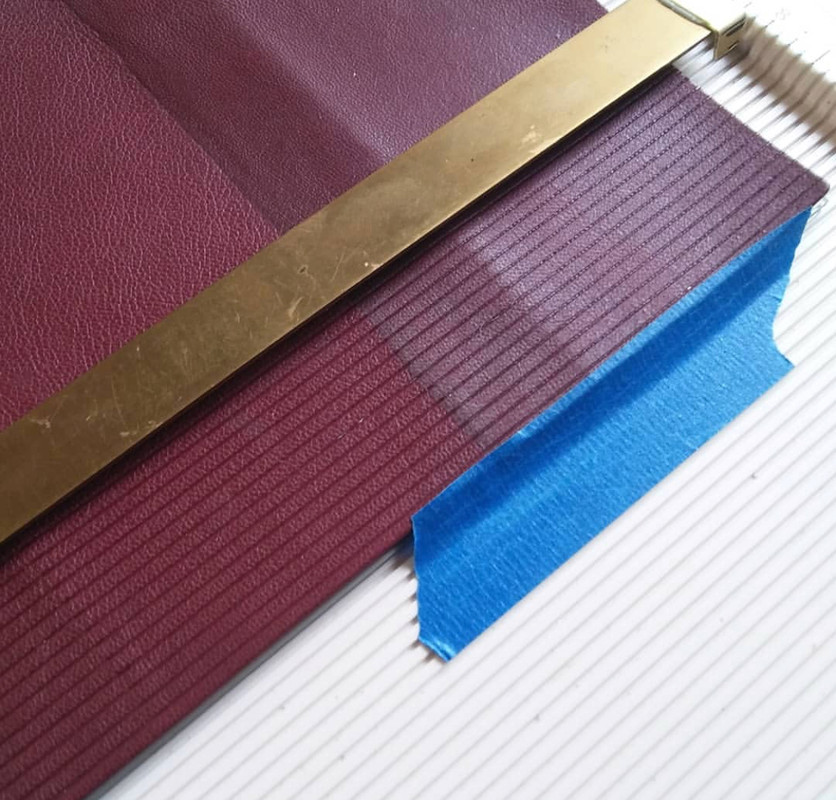 The original booth diary, the red hardcover booklet inside the wallet was removable so you could buy a replacement for the next year without having to replace the entire wallet. That is how we designed mine as well.
here is the finished product 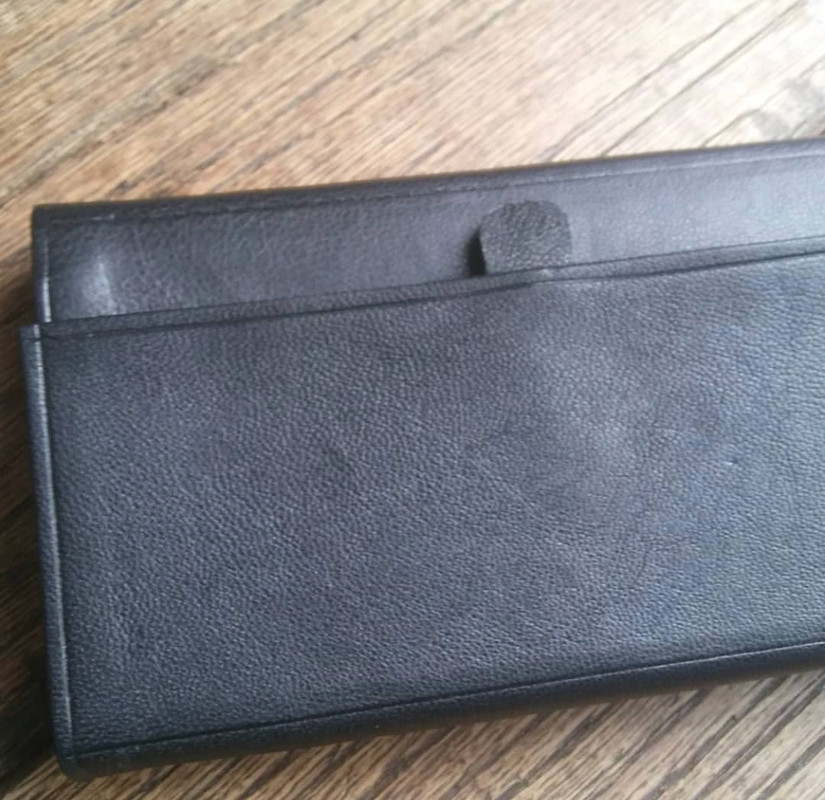 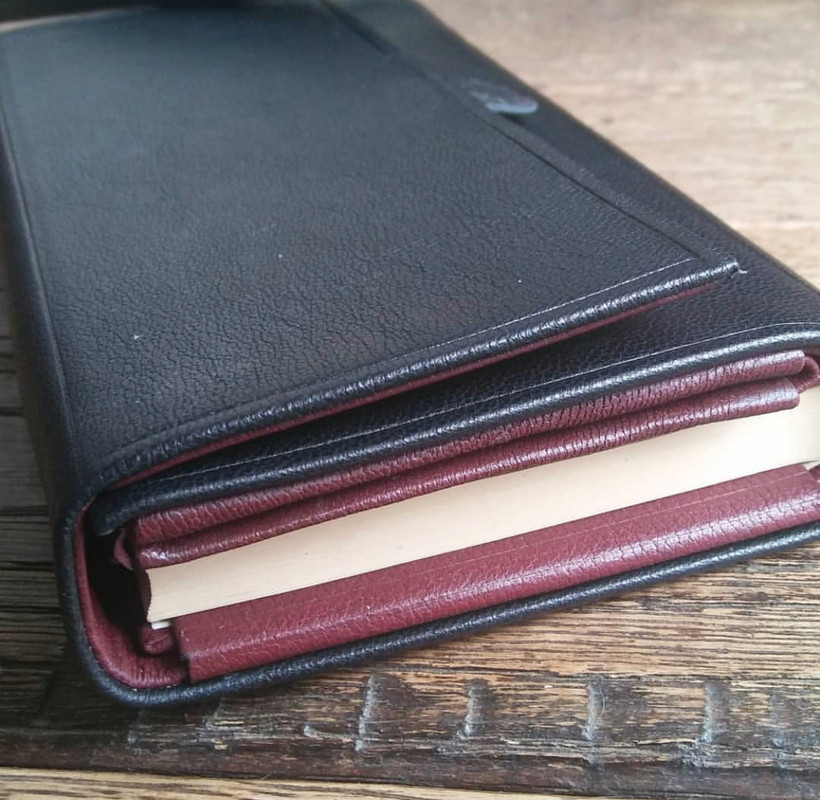 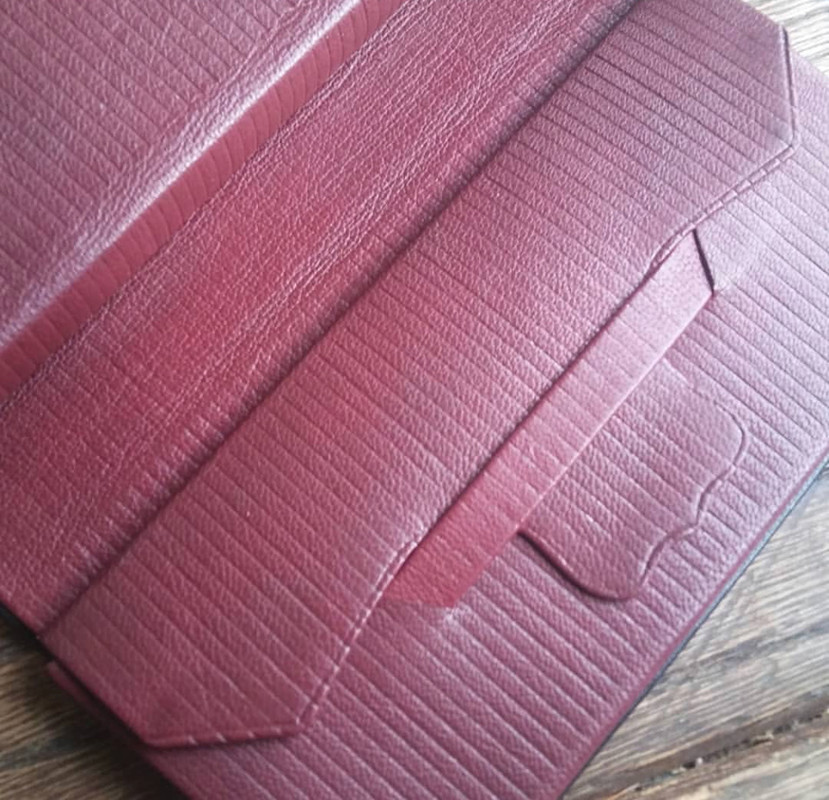 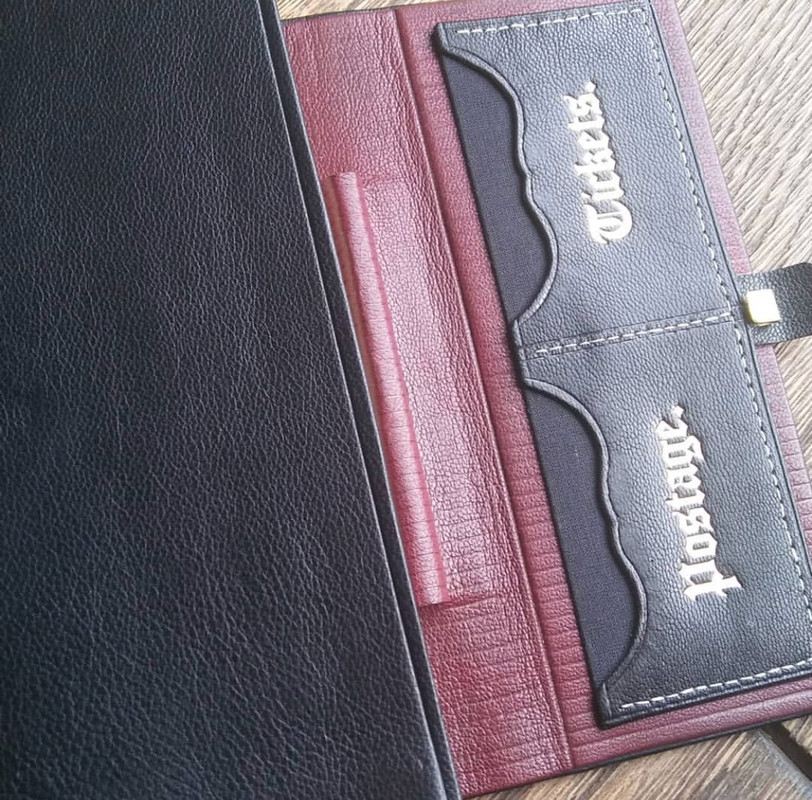 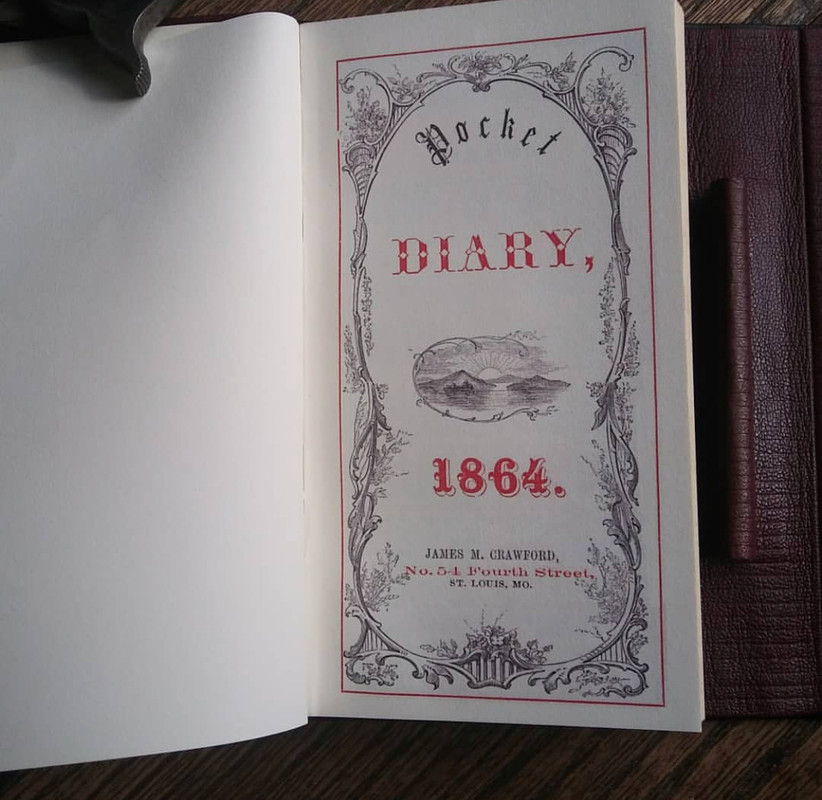 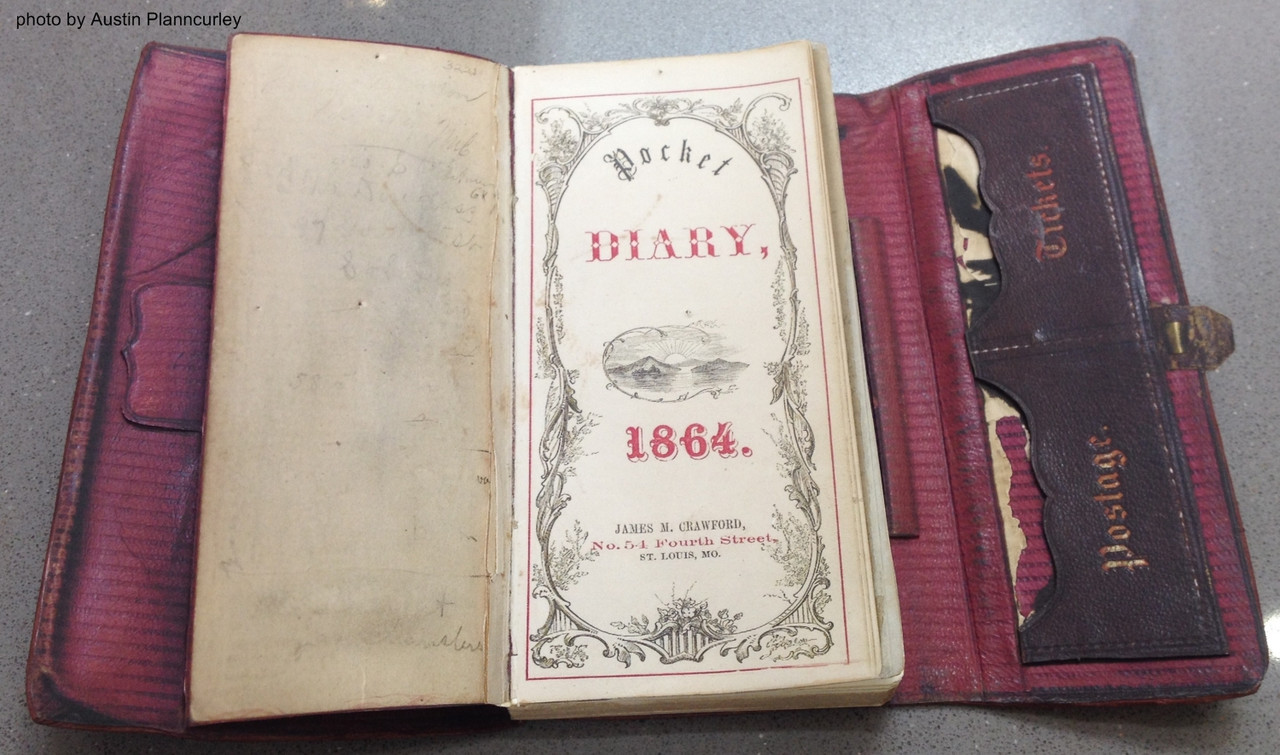 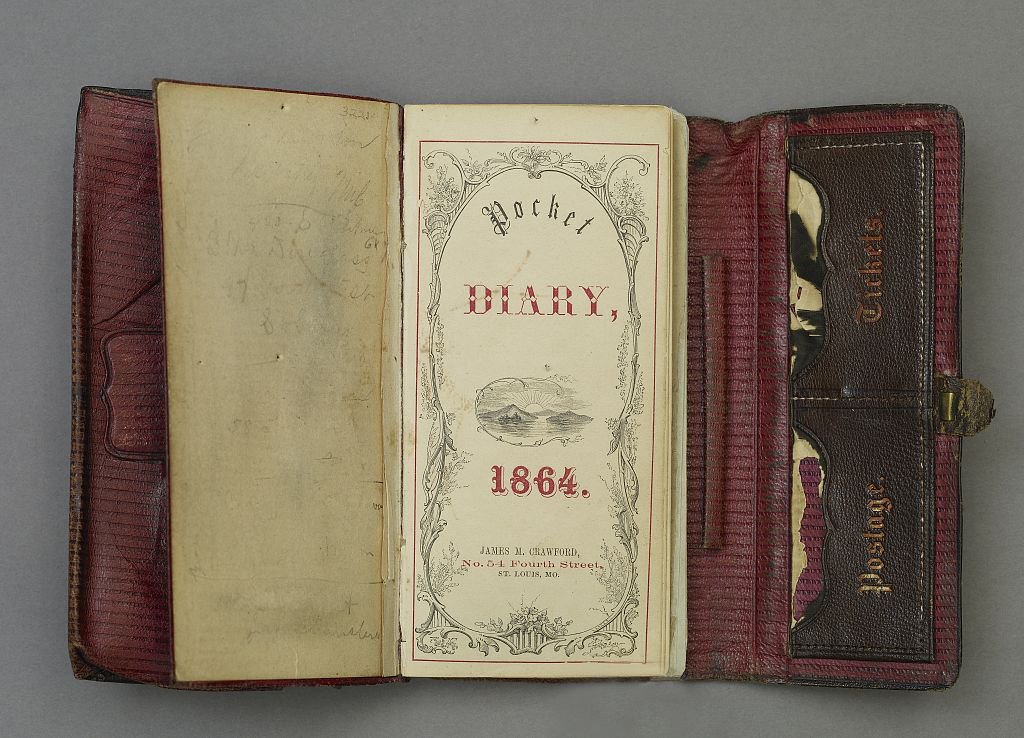 RPF PREMIUM MEMBER
Very nice work. Love the research and attention to detail. Will you be filling out the pages like the prop or using it as a day-to-day notebook?

This is absolutely magnificent and I'm sure once its broken in a little it will look even better.

Congratulations, I have one of Sarednab's diaries so its been a passion of mine for ages too. The natural form of this and the quality of the leather and diary itself are gorgeous.

Thank you for sharing. Keep us updated on how it weathers..

Krats said:
Very nice work. Love the research and attention to detail. Will you be filling out the pages like the prop or using it as a day-to-day notebook?
Click to expand...

Thanks for the kind words! I am actually planning on using it day to day as a regular notebook.
S

KramStaar said:
This is absolutely magnificent and I'm sure once its broken in a little it will look even better.

Congratulations, I have one of Sarednab's diaries so its been a passion of mine for ages too. The natural form of this and the quality of the leather and diary itself are gorgeous.

Thank you for sharing. Keep us updated on how it weathers..

Thanks for the compliments. I thought about having It weathered, but at the end, I decided to just let it age naturally from use. I will have this for years to come and have an extra blank diary book I can insert when this one is full.

At the very beginning I was thinking "okay, do I want another prop to display, or something I can use everyday and enjoy?"

The hardest thing about this project was making this functional. Props have to look good for the screen, but functionality is the last thing that's worried about. So there were many obstacles when it came to that. For instance, Sarednab's copy is stitched together which is great for durability, but the original is not stitched, (aside from postage pockets.)

When you are trying to make the worlds most close copy, you run into little issues all the time, which have to be worked through instead of pushing aside, so the end result can be that much more believable. Something as simple looking as the clasp, was actually the most problematic part of this entire build. The devil is in the details as they say.

What an amazing piece. I would love to have that. Like others have said, its going to look even better after you break it in a bit. Please post updated photos
S

Customrelic said:
What an amazing piece. I would love to have that. Like others have said, its going to look even better after you break it in a bit. Please post updated photos
Click to expand...

Thanks for the kind words.

There is one other copy that exists that is a finished copy like mine, which belongs to the person who did this project with me that owns the shop. He made one copy for himself as well. I am currently trying to work out a deal to purchase said copy but it's not easy since this isn't a project that anyone wishes to make again. If I can get it, I been thinking of distressing that copy exactly like the original. I

If I am able to obtain that copy, I will post pictures after the distressing process.

in the mean time, here are a couple more pictures of my copy 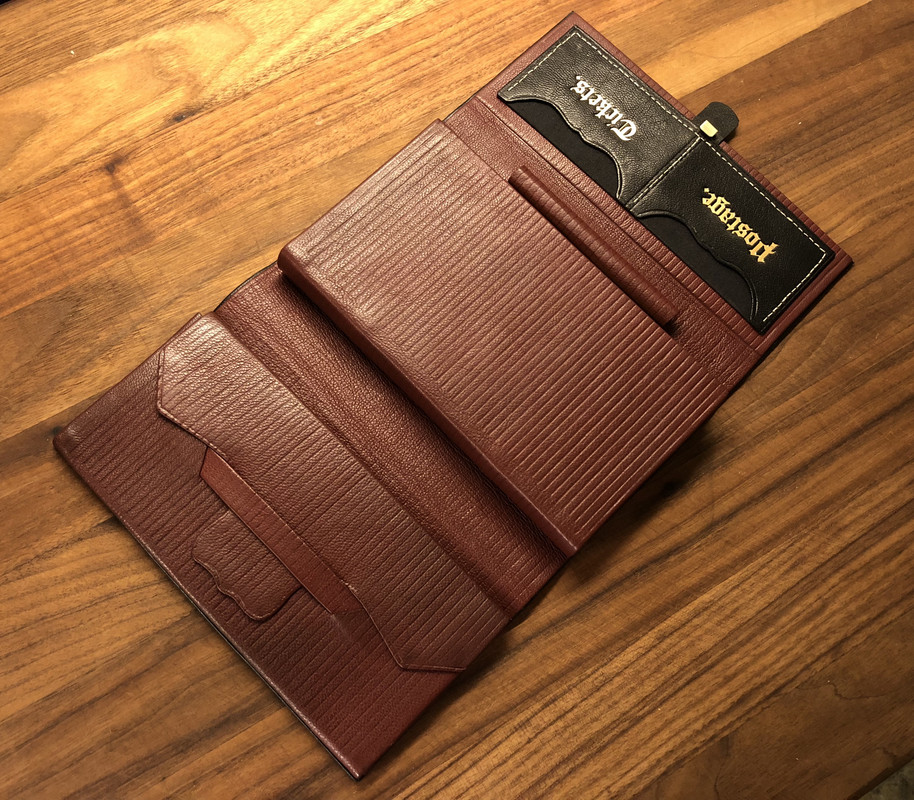 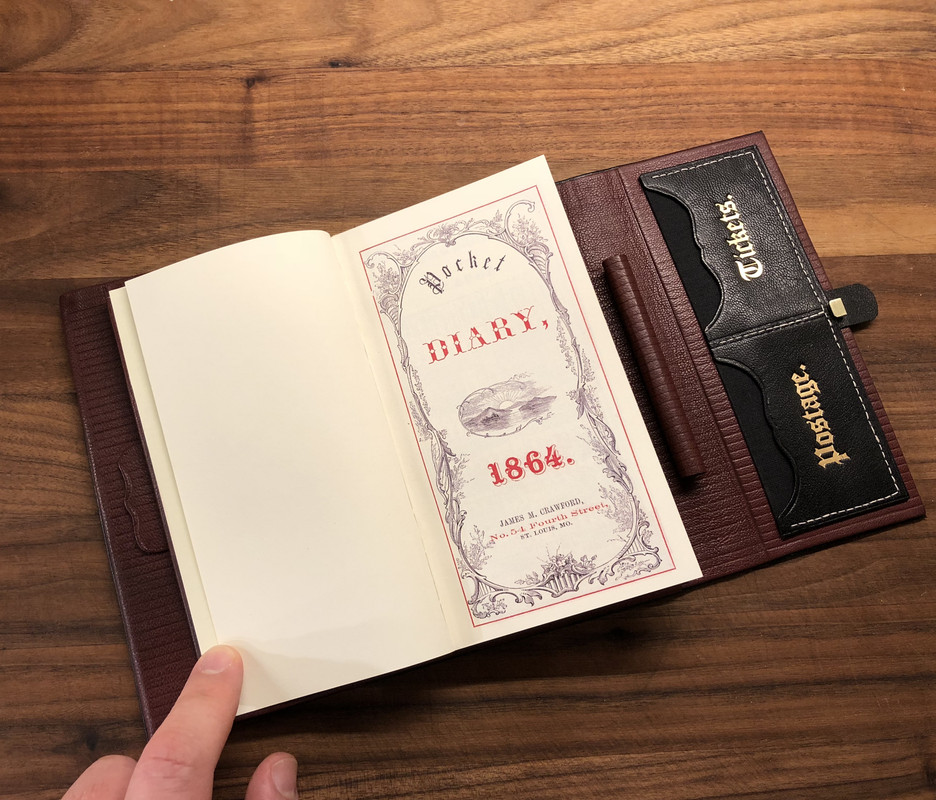 RPF PREMIUM MEMBER
Only 4 years late. Is there any way to get one of these now? I'd be glad to buy one from another Forum member, if they are so inclined.

Finished up a lifesize Predator wall buster and got it mounted in the cave.