RPF PREMIUM MEMBER
One thing that has slowed me up a bit is that I have been reprinting some of the parts with my resin printer. I have had a few failed projects that were supposed to be full resin prints, but for me at least, these small highly detailed parts are where the new printer shines for sure!

Even though the two parts were printed at the same .05 layer height, the detail and smoothness of the resin just can not be beaten: 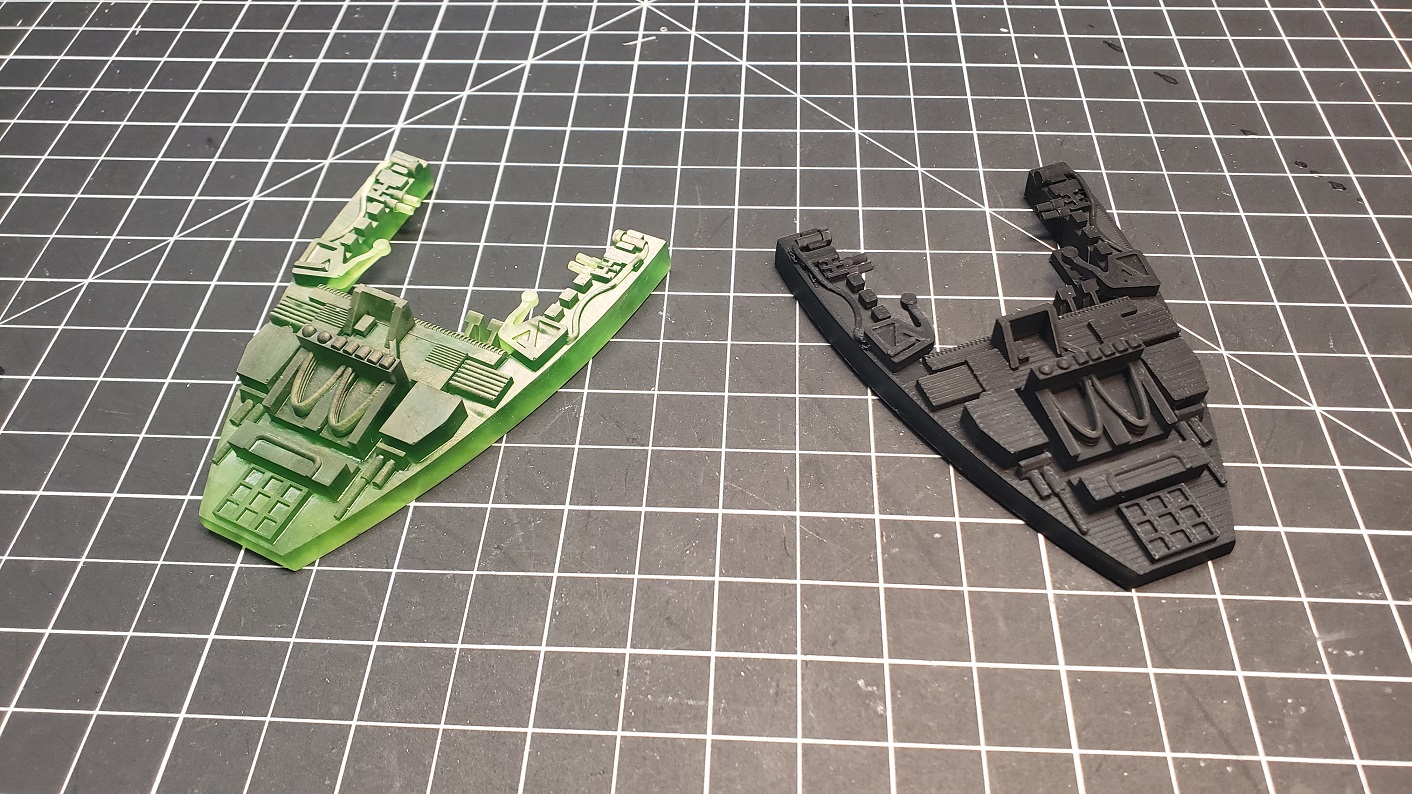 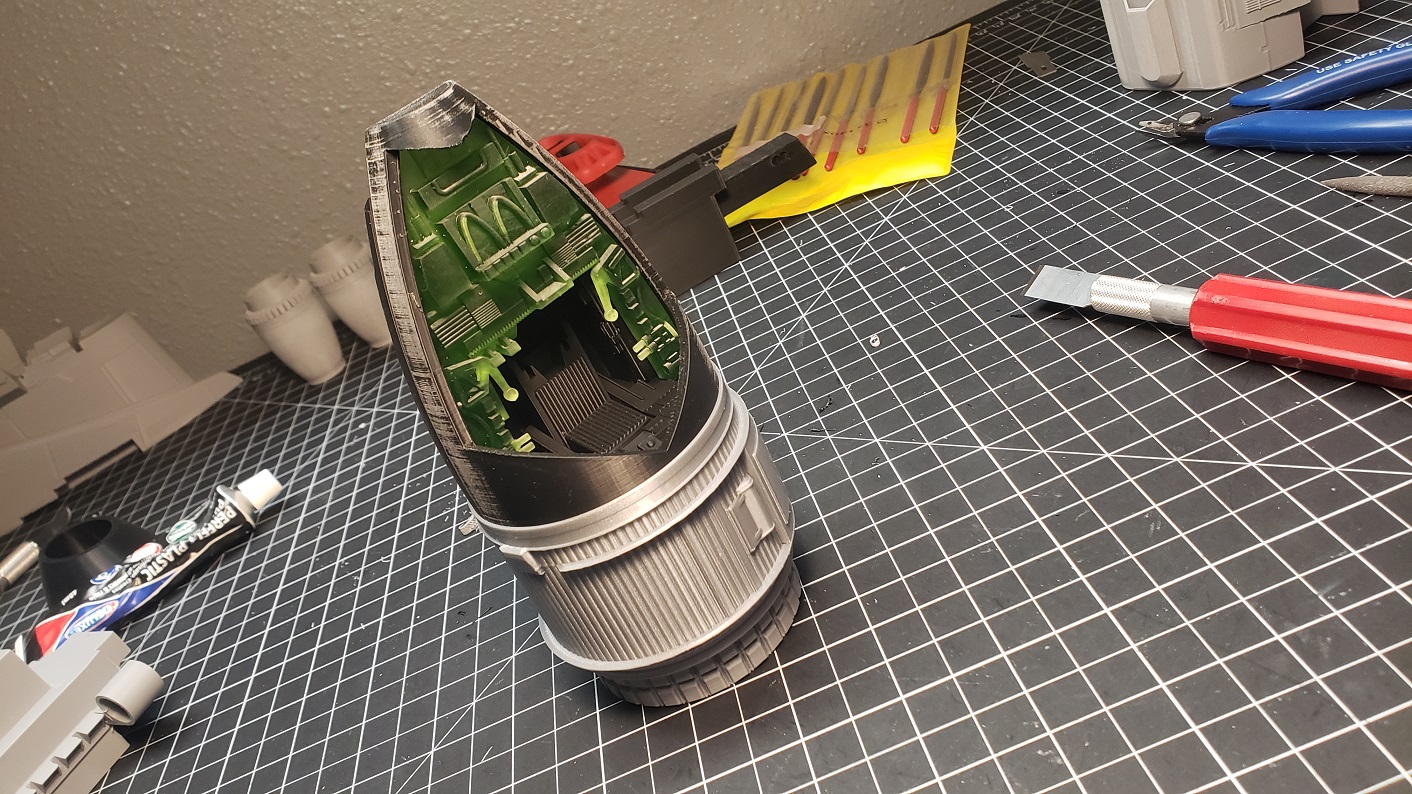 RPF PREMIUM MEMBER
These files include the entire kit as a single print, so just for fun I cranked the resin printer down to .025, shrunk the model way, way down, and gave it a go. It actually turned out pretty good considering how small it is! 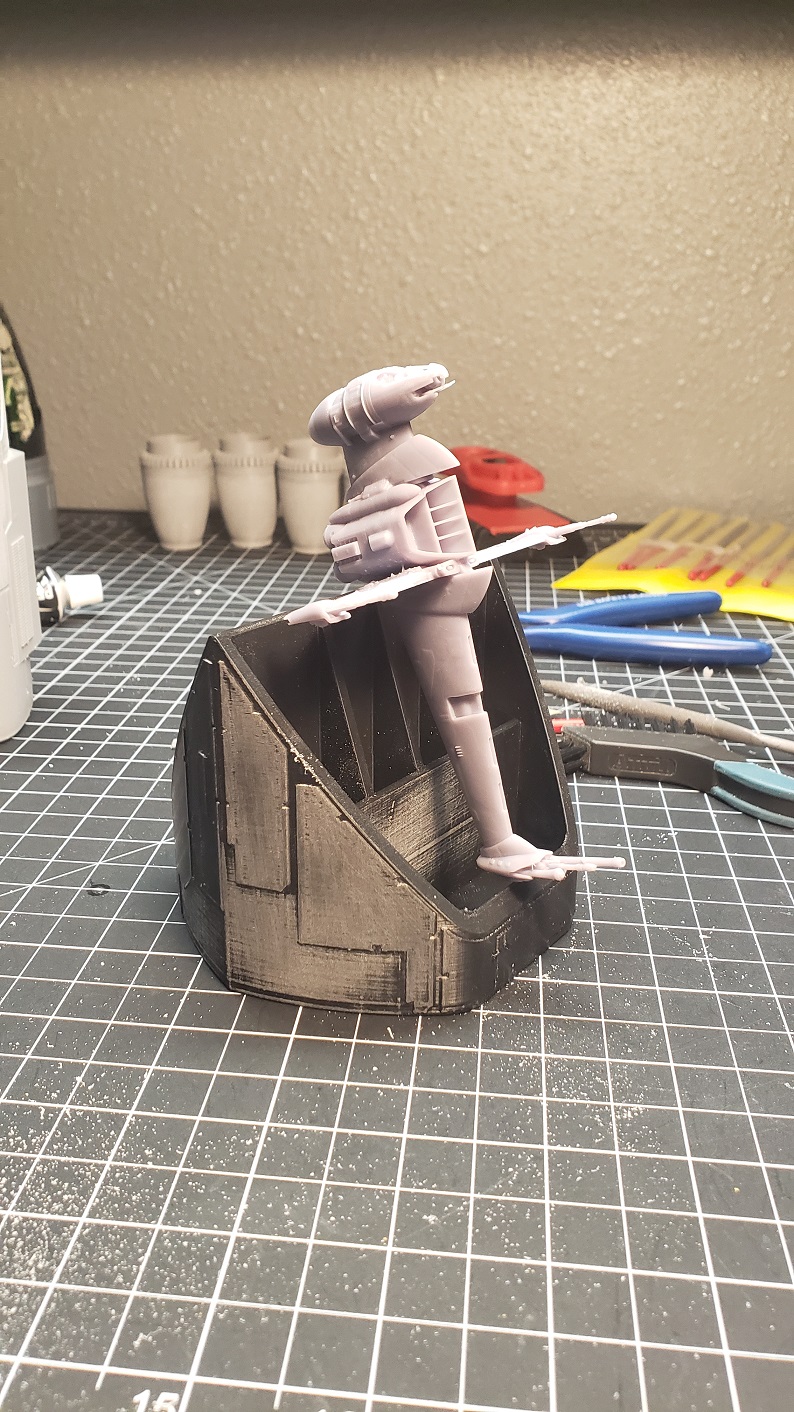 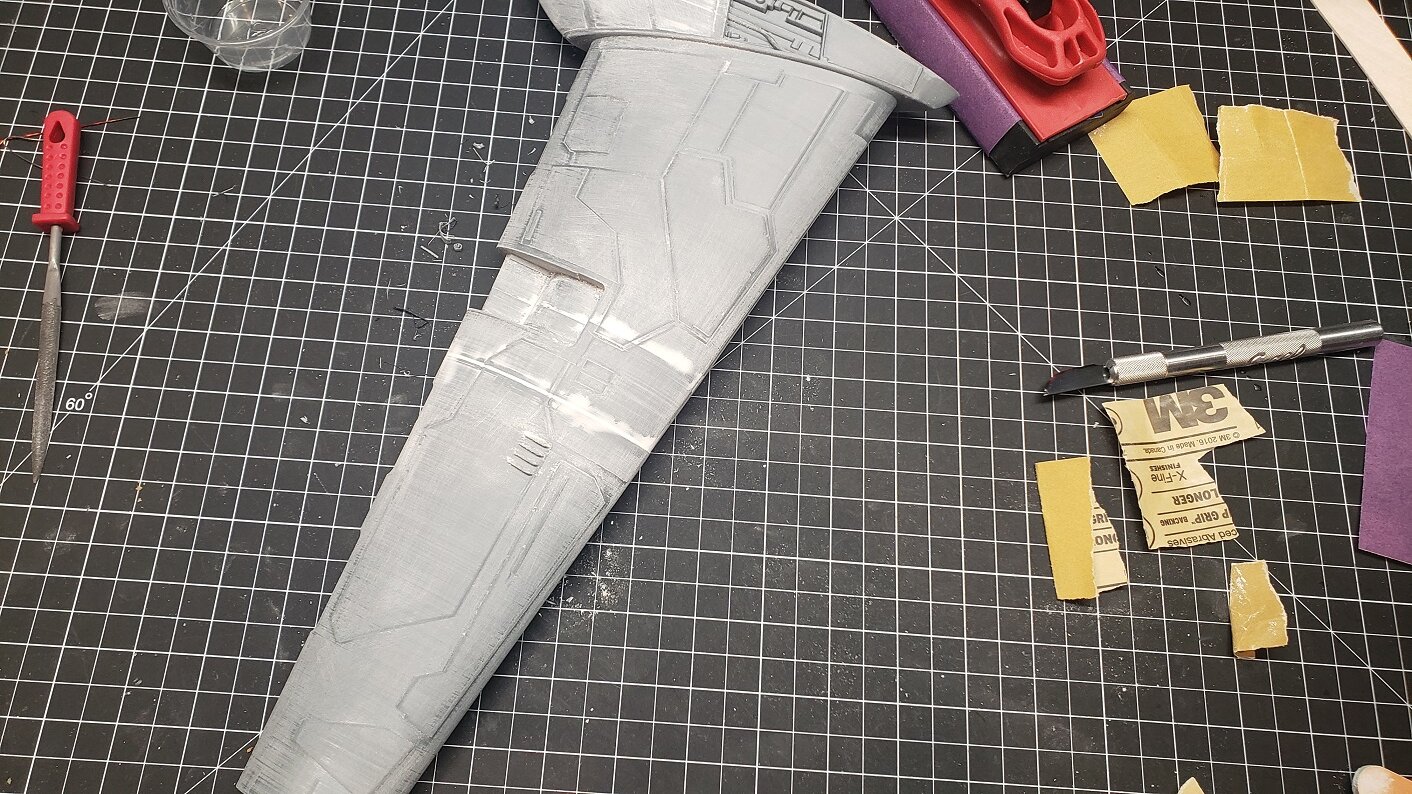 Love the way those two cockpit insides look like. As you said, resin cannot be beaten!!

I made pretty good progress for this weekend, it's really starting to come together. I just have a few more parts to resin print: 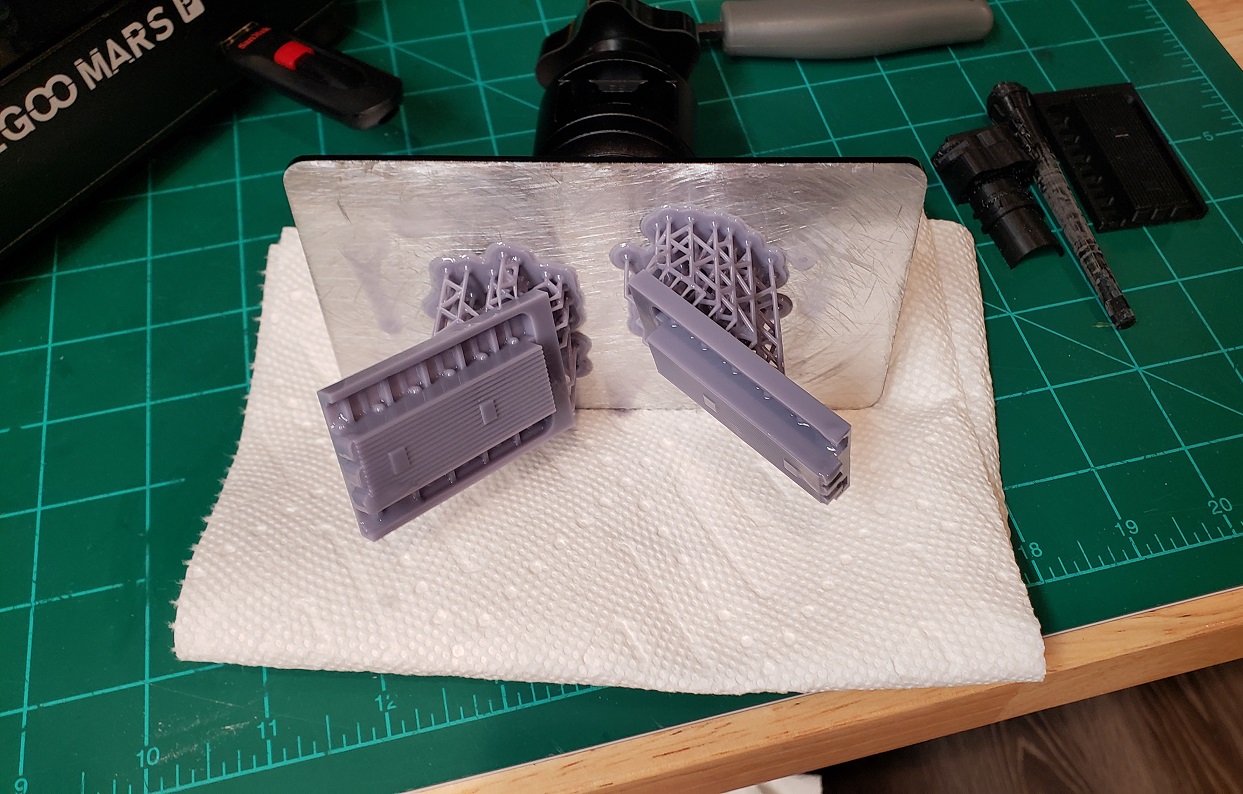 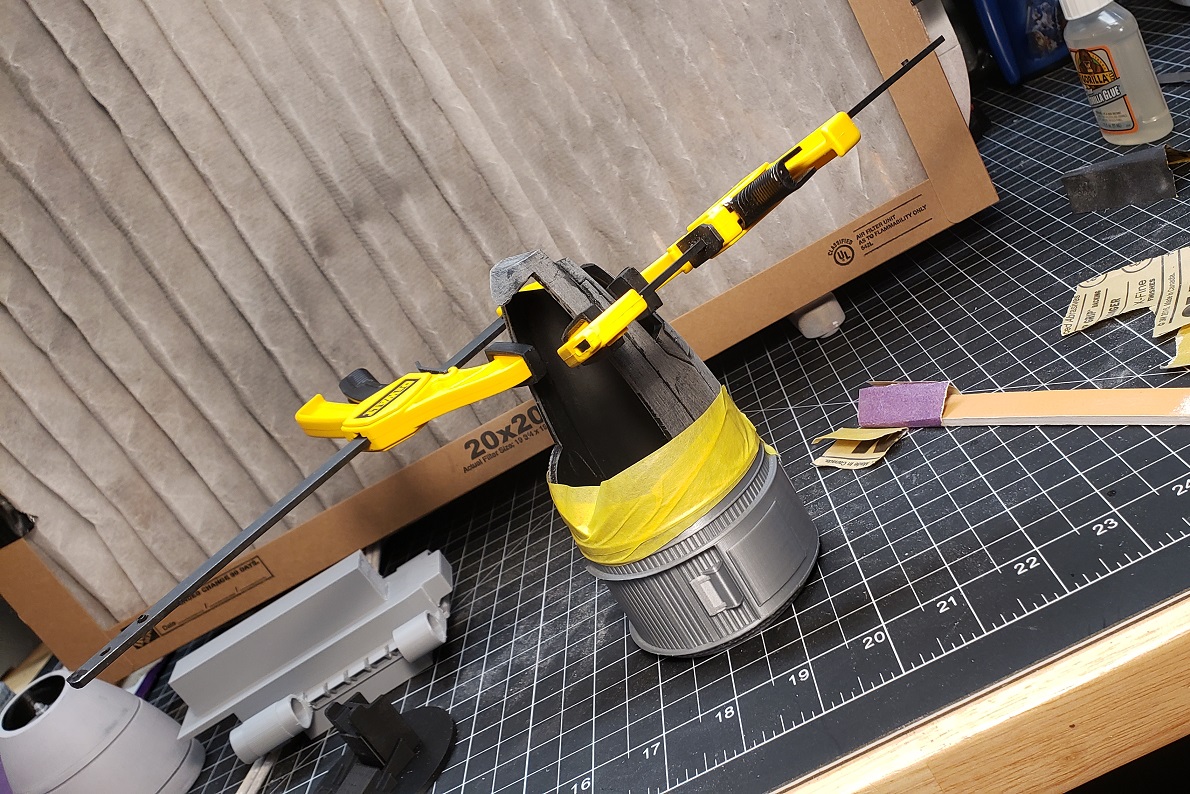 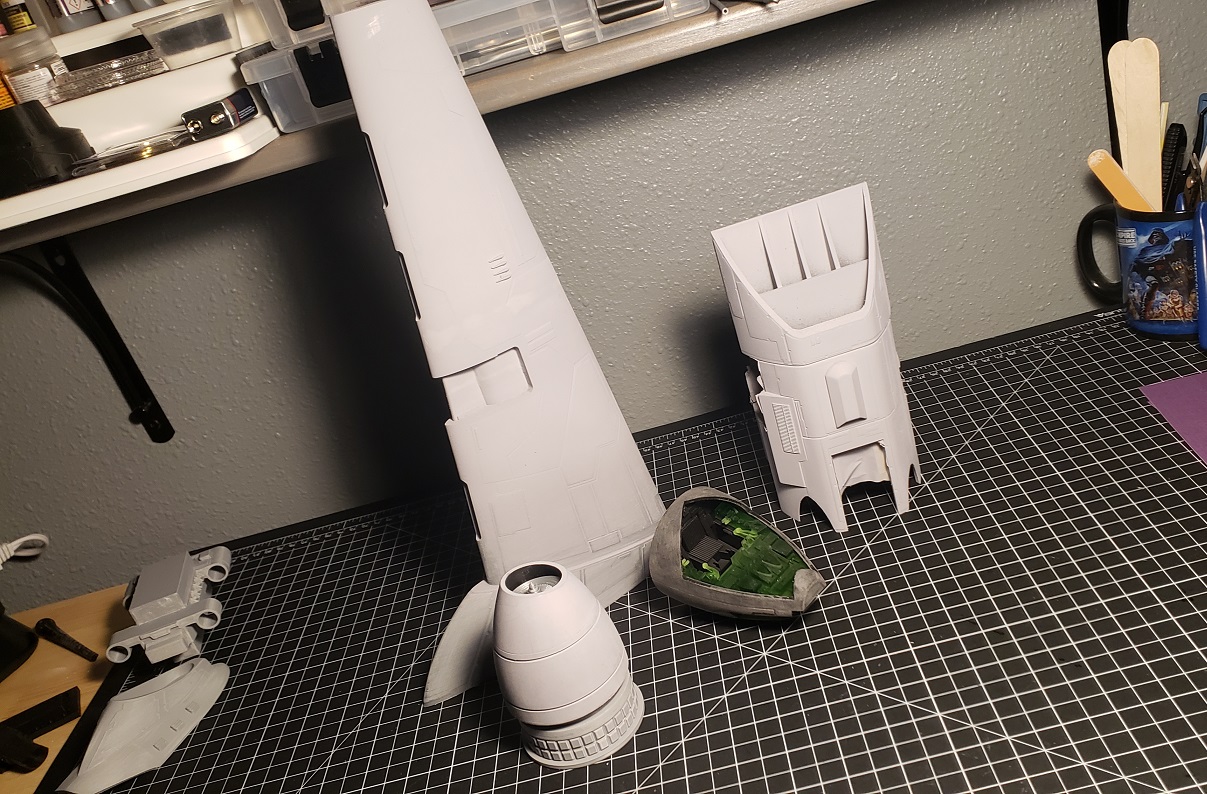 Wow! Really appreciate you sharing your process. Obviously you are having a lot of fun!
One thing to note: the filming miniatures can be classified as 1/32 scale because they used 1/32 scale pilot figures (from the 1/32 scale Tamiya F-14A kit.) Although some of the figures used were obviously over or under scaled (A-Wing comes to mind...) the B-Wing figure seems to match very well. Cheers!
Regards, Robert

rbeach84 said:
Wow! Really appreciate you sharing your process. Obviously you are having a lot of fun!
One thing to note: the filming miniatures can be classified as 1/32 scale because they used 1/32 scale pilot figures (from the 1/32 scale Tamiya F-14A kit.) Although some of the figures used were obviously over or under scaled (A-Wing comes to mind...) the B-Wing figure seems to match very well. Cheers!
Regards, Robert
Click to expand...

Very true on your point about the scale, but for this build, I decided on 1:24 as I already have an X-Wing and TIE Interceptor that I built and those were both 1:24 scale so I wanted them to match.

I have been utilizing Mesh Mixer to re-combine some of the parts and print them in resin, I have made some good progress and should have some updates tomorrow. Almost time to start painting some of the kit!

RPF PREMIUM MEMBER
Time to break out the two-part finishing resin which is one of my favorite ways to get rid of the 3D printed lines. I will typically utilize this processes to cover up the parts left from the PLA prints where sanding just isn't realistic, or if I just don't feel like sanding 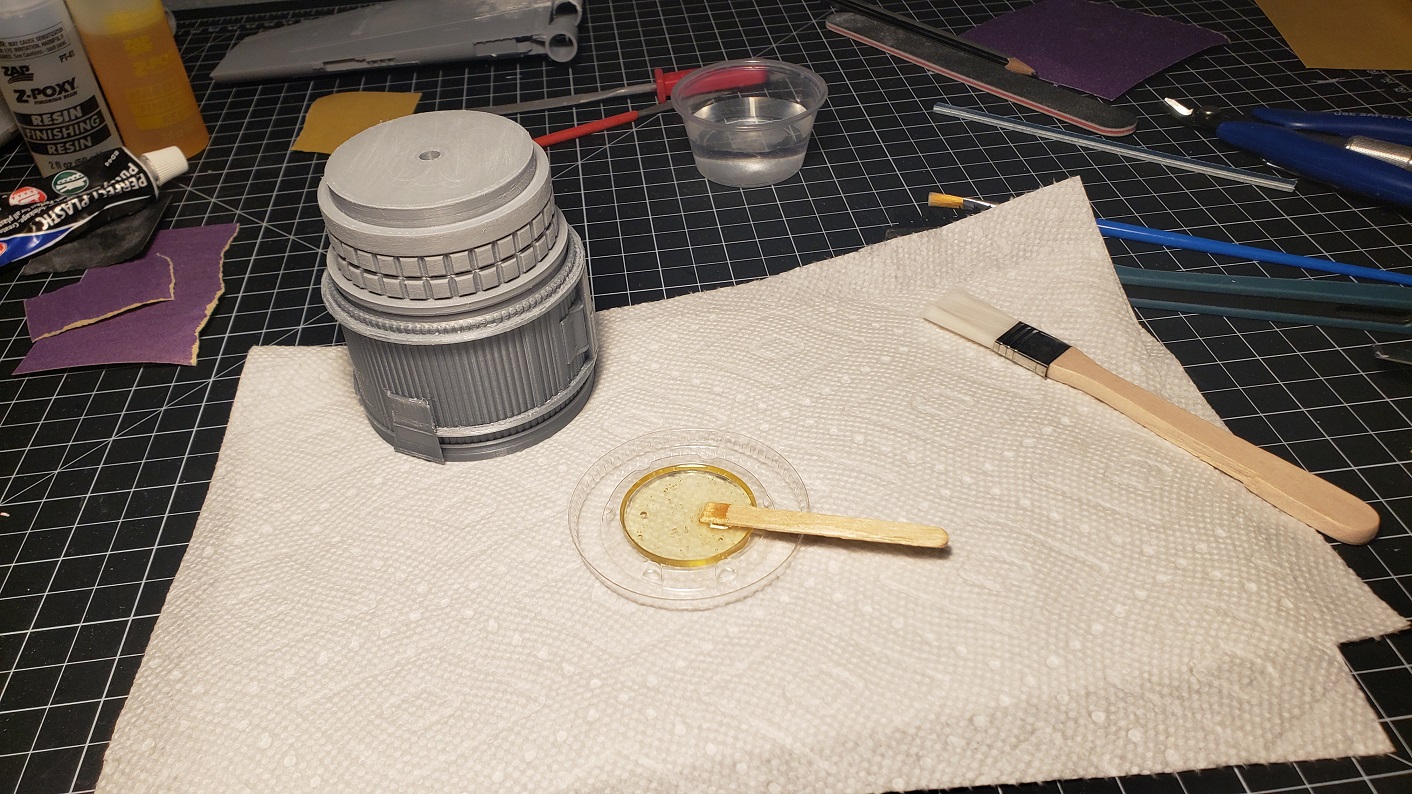 RPF PREMIUM MEMBER
I fought and fought with these wing ends that house the guns. I was finally able to get a half-decent print using a .25 mm print nozzle with my PLA printer but I was still never 100% happy.

Then came my new resin printer, and this was a perfect test for it! Not only is the print so much cleaner, but I also combined the two parts into one and was able to print the entire assemply. 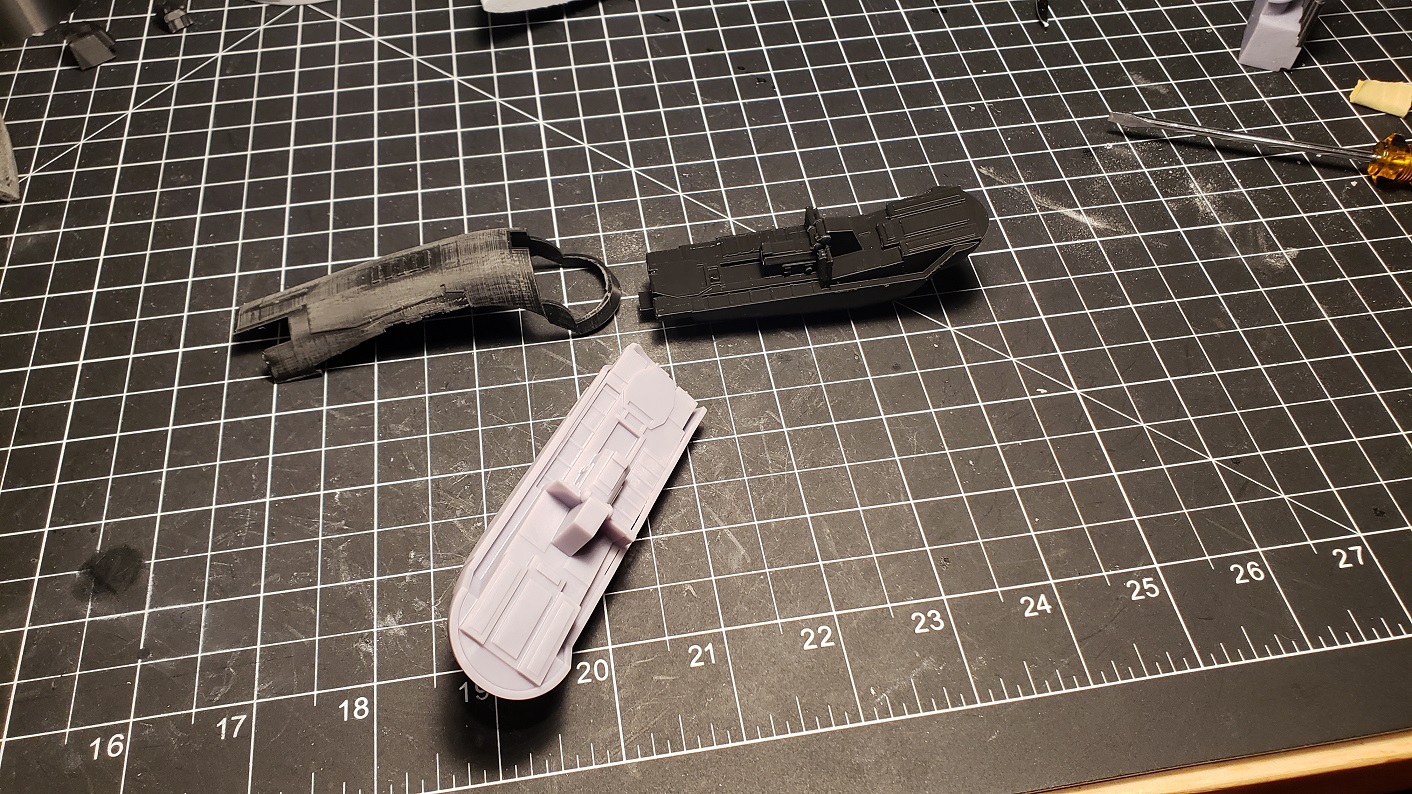 And they fit perfectly! 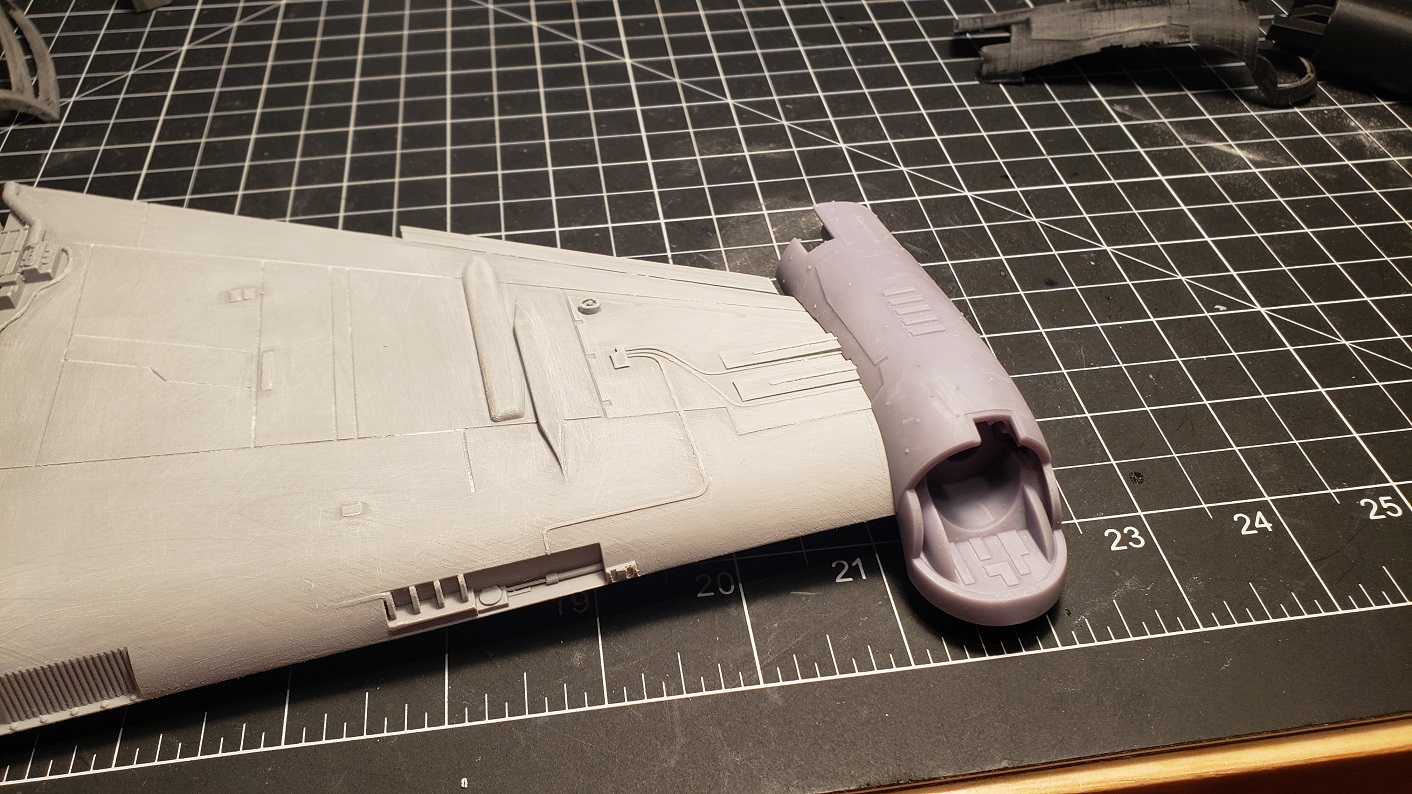 You can see on the wing above that with a .25 nozzle I was able to capture pretty much 100% of the detail. My .40 nozzle has issues with this but I was only able to print a single wing. When using PLA the .25 can do amazing things (though very sloooooowly) but they clog really easily, hence the one wing.

So, I decided to shave off all the parts that the printer was having issues with and just lay down some wire instead. Not only does it look way better it's much more realistic and probably closer to how the actual model was built.

This is one of my test wings (I think I have printed this 4 times...) I am using to figure out the best way to lay down these wires and pipes: 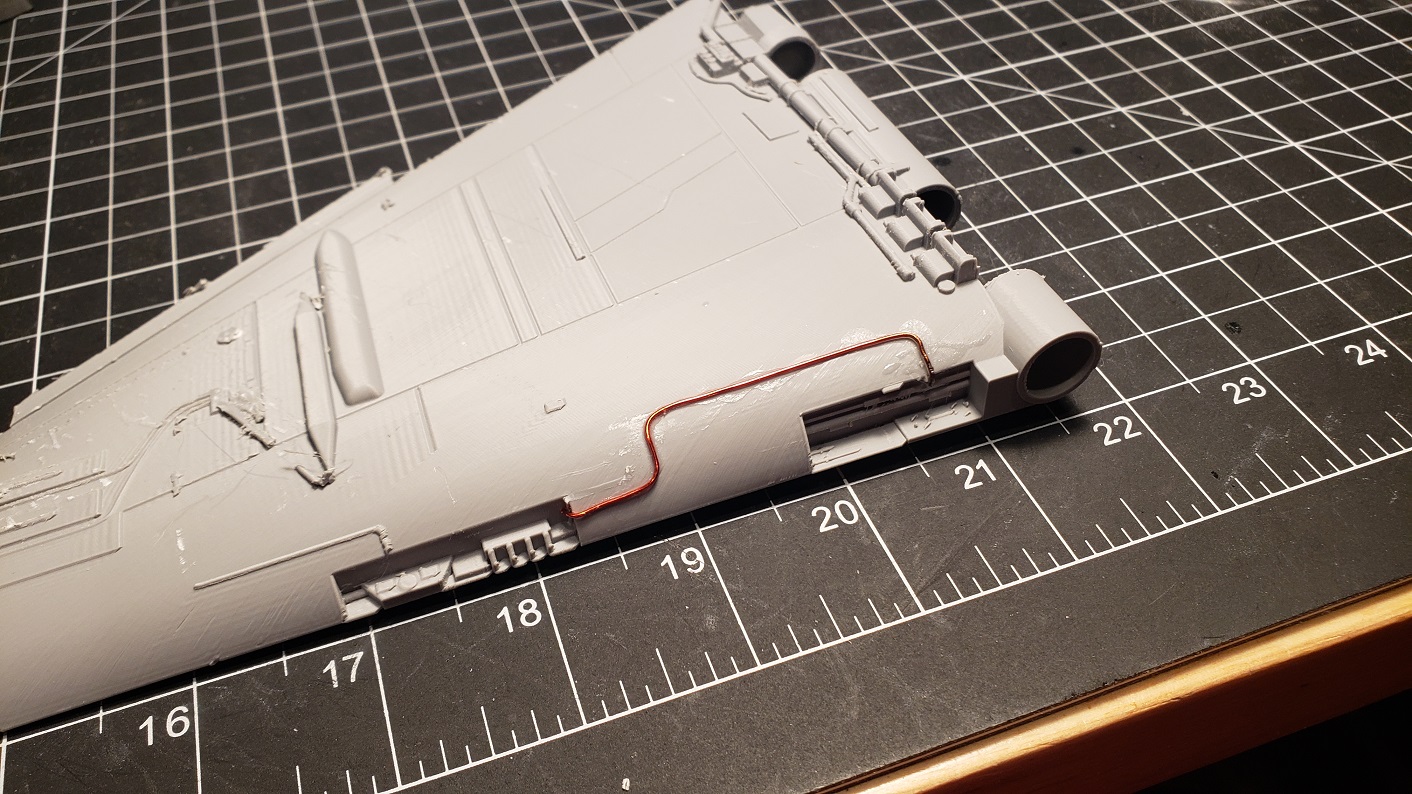 RPF PREMIUM MEMBER
Also, I ended up getting some UV LED's from Amazon and building this little rig in about 5 minutes (yes it shows). I am curious what happens to the uncured resin inside the model, is this something to even worry about? Where I can I hollow and drill out the parts but there is no way to cure the inside of the part. Again, I could be very mistaken on how this process works, but just in case I made this little curing light to take care of it: 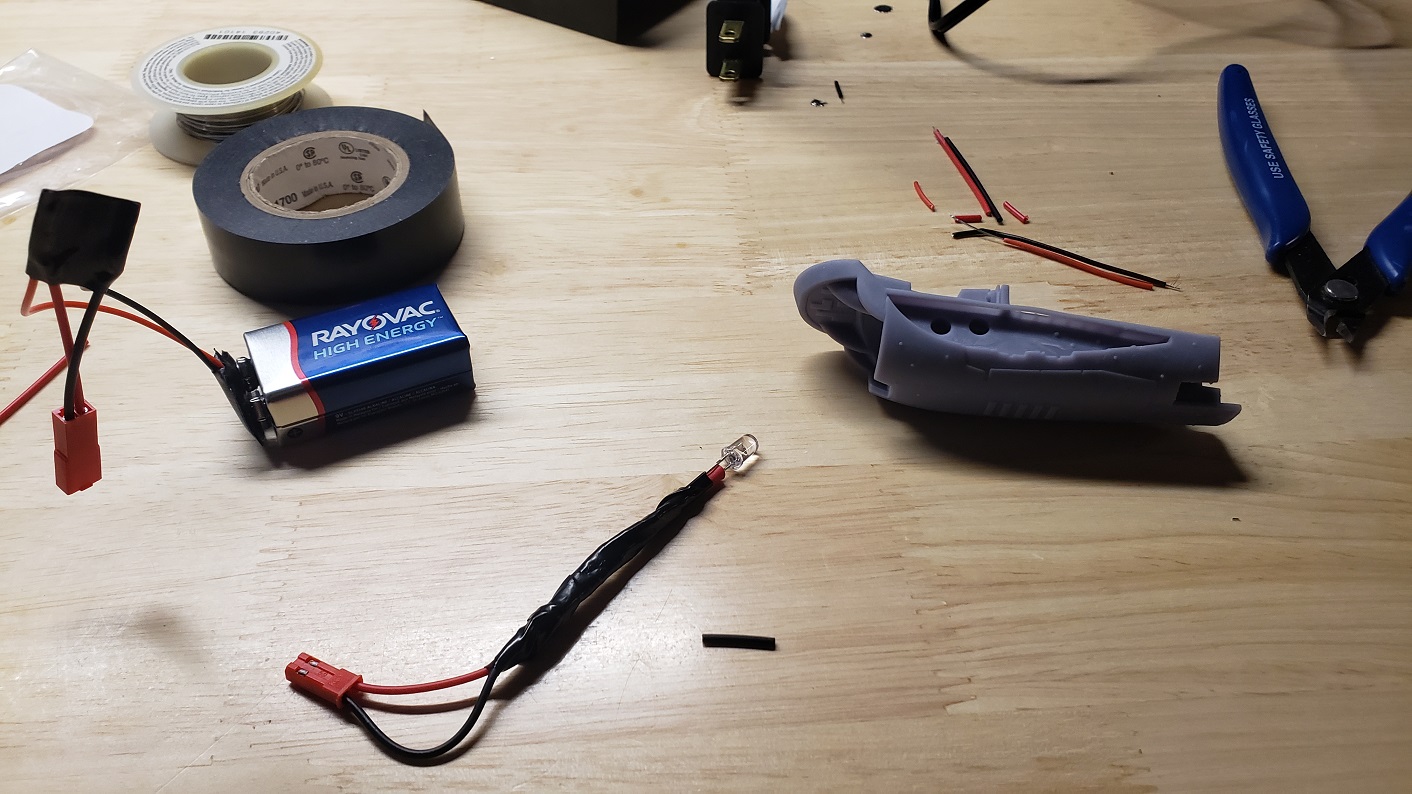 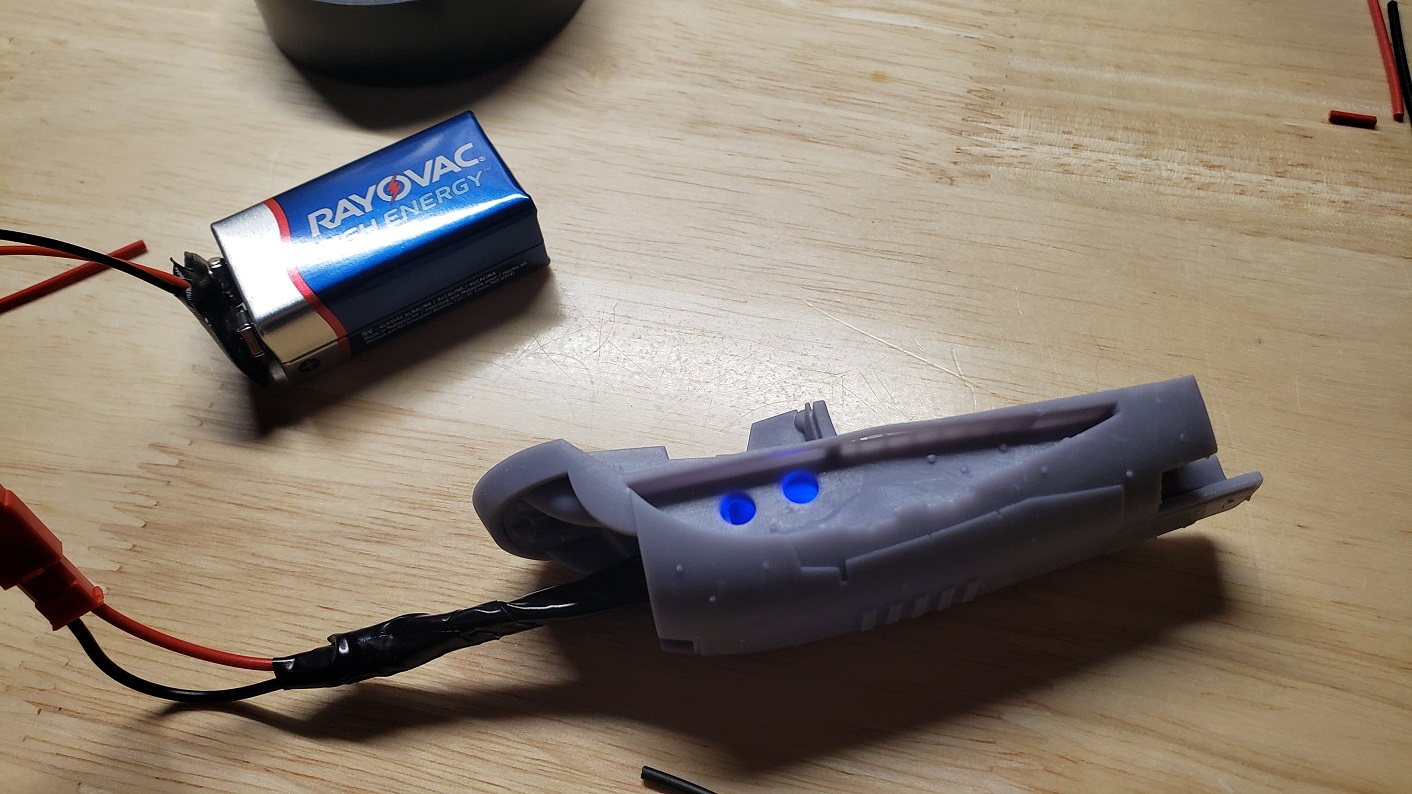 RPF PREMIUM MEMBER
I am taking these parts all the way down to 800 grit paper and they are turning out great! No process is perfect to get rid of all print lines, but this is getting pretty darn close! I have a few more parts to work on and then I should be able to start the final assembly so I can attach all the smaller parts. 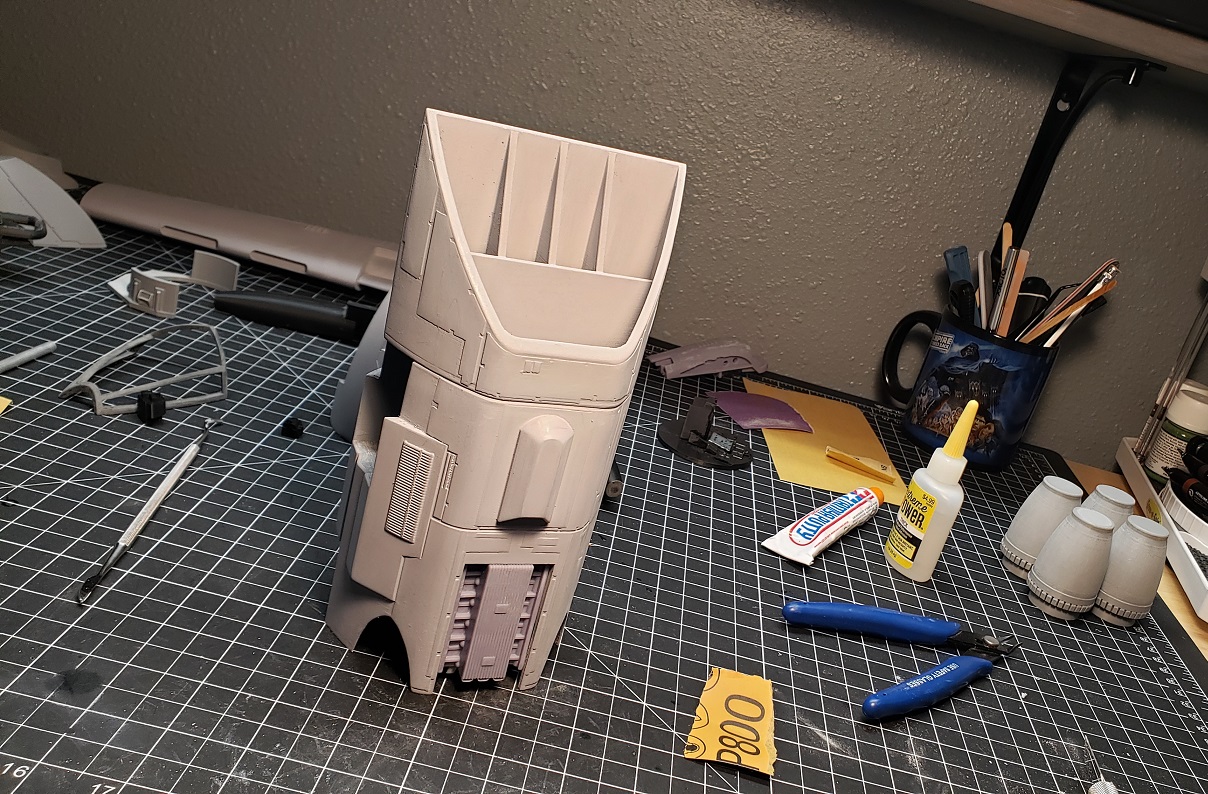 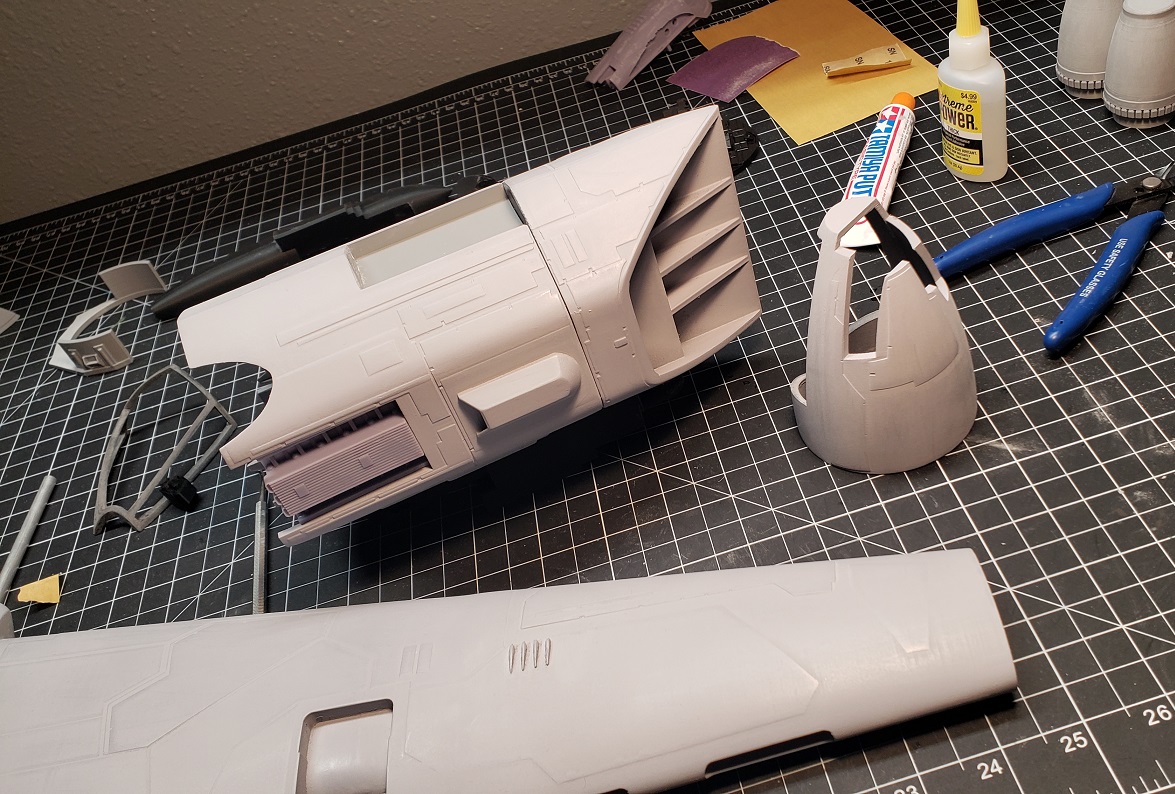 It's looking good...Lord knows there's a lot of material used in making piping on a model: plastic coated wires, copper wires, etc...Lighting is great but...careful with light bleeds. You'll have to turn off all the light in your room to make sure you don't have that problem (even with a coat of paint).

The piping detail looks terrific. What is the resin you are using to fill in lines? I think you mentioned it in a previous build but I dont remember.

Star Lord said:
The piping detail looks terrific. What is the resin you are using to fill in lines? I think you mentioned it in a previous build but I dont remember.
Click to expand...

Thanks. The resin I use is by ZAP, it's called Z-Poxy Finishing Resin.

I have been reprinting a lot of the detailed parts in resin which is why this has temporarily slowed down.

I also got a new toy this week (Ender 3 Max) so that I can get my Razor Crest printed. My issue is that I am running of room in my office so I decided to clean out the storage room next to my office and build a 3D Printing Lab 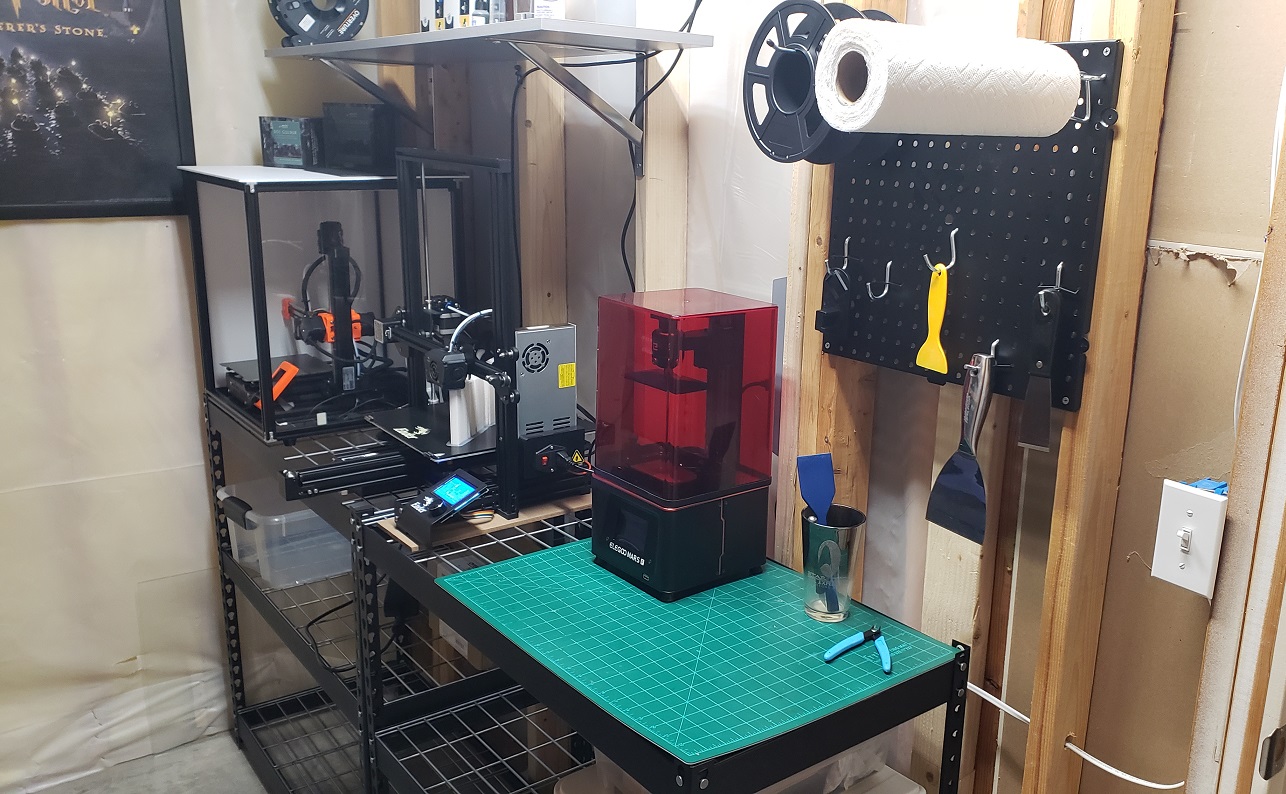 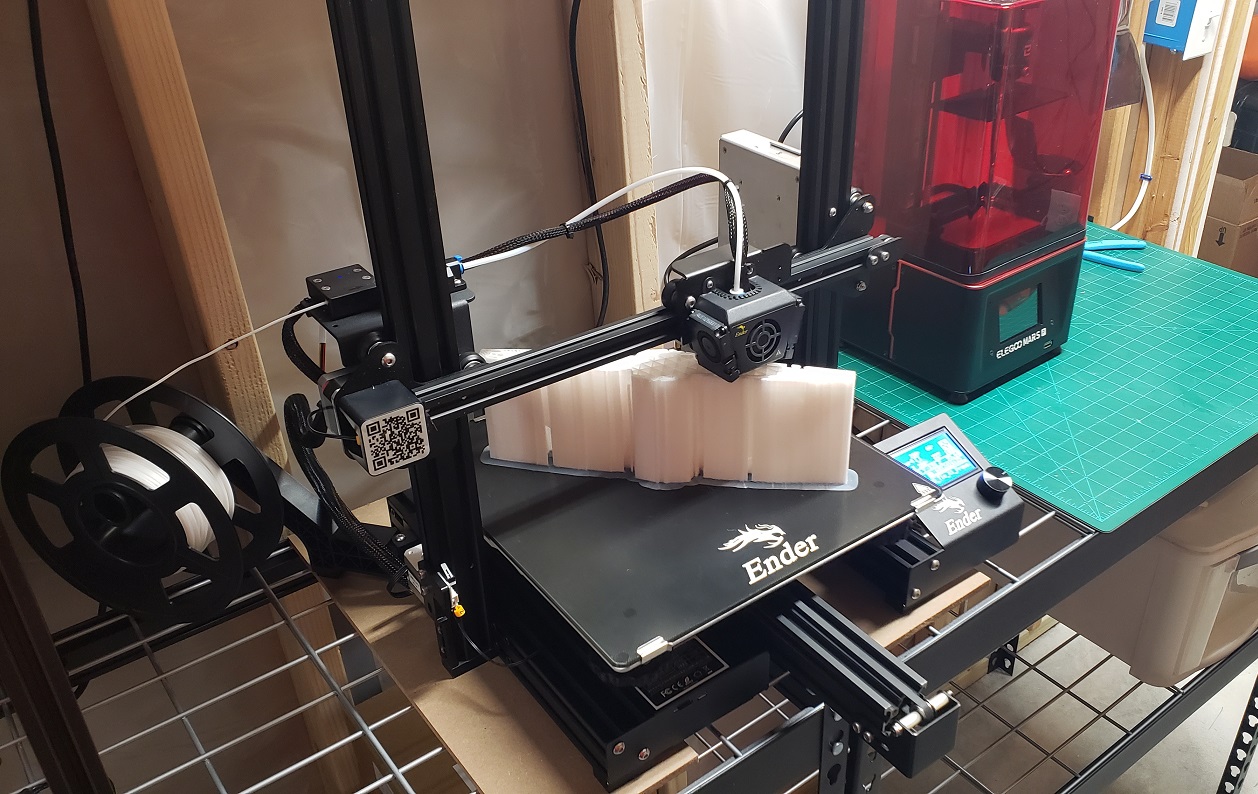 Okay, time to finish up this B-Wing!!!

RPF PREMIUM MEMBER
More awesome resin prints! These were the last few parts I had to re-print in resin, they will really help set off the model. 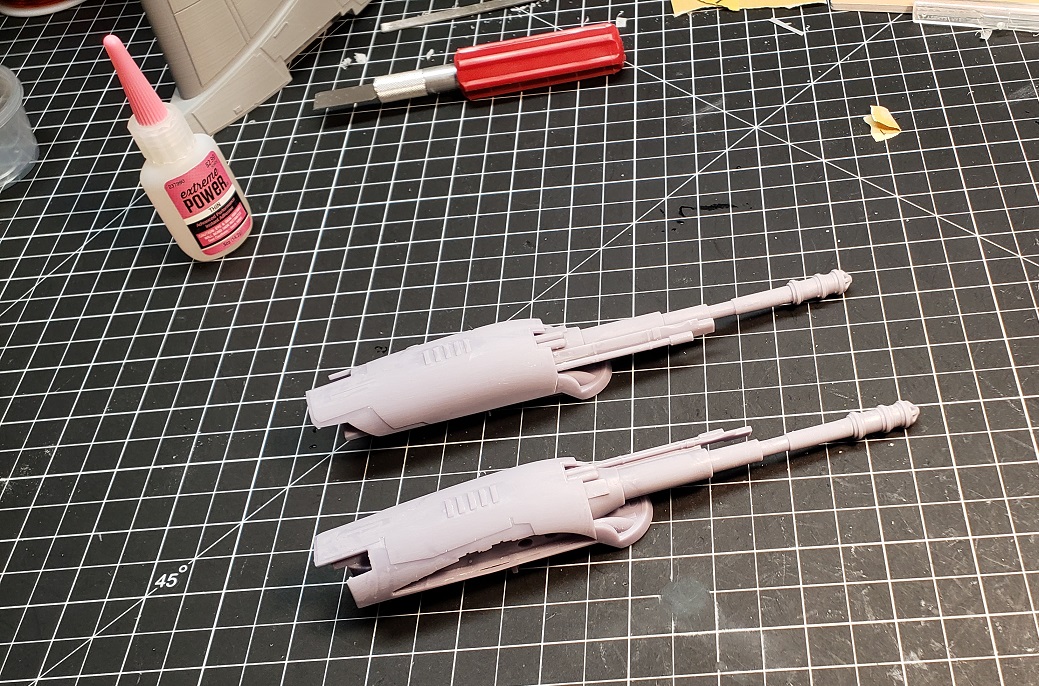 RPF PREMIUM MEMBER
This kit has been a bit of a struggle, it's actually much more difficult than both my TIE and X-WIng. I thought it was going to be easier but this ship is much more complicated than either of those two.. 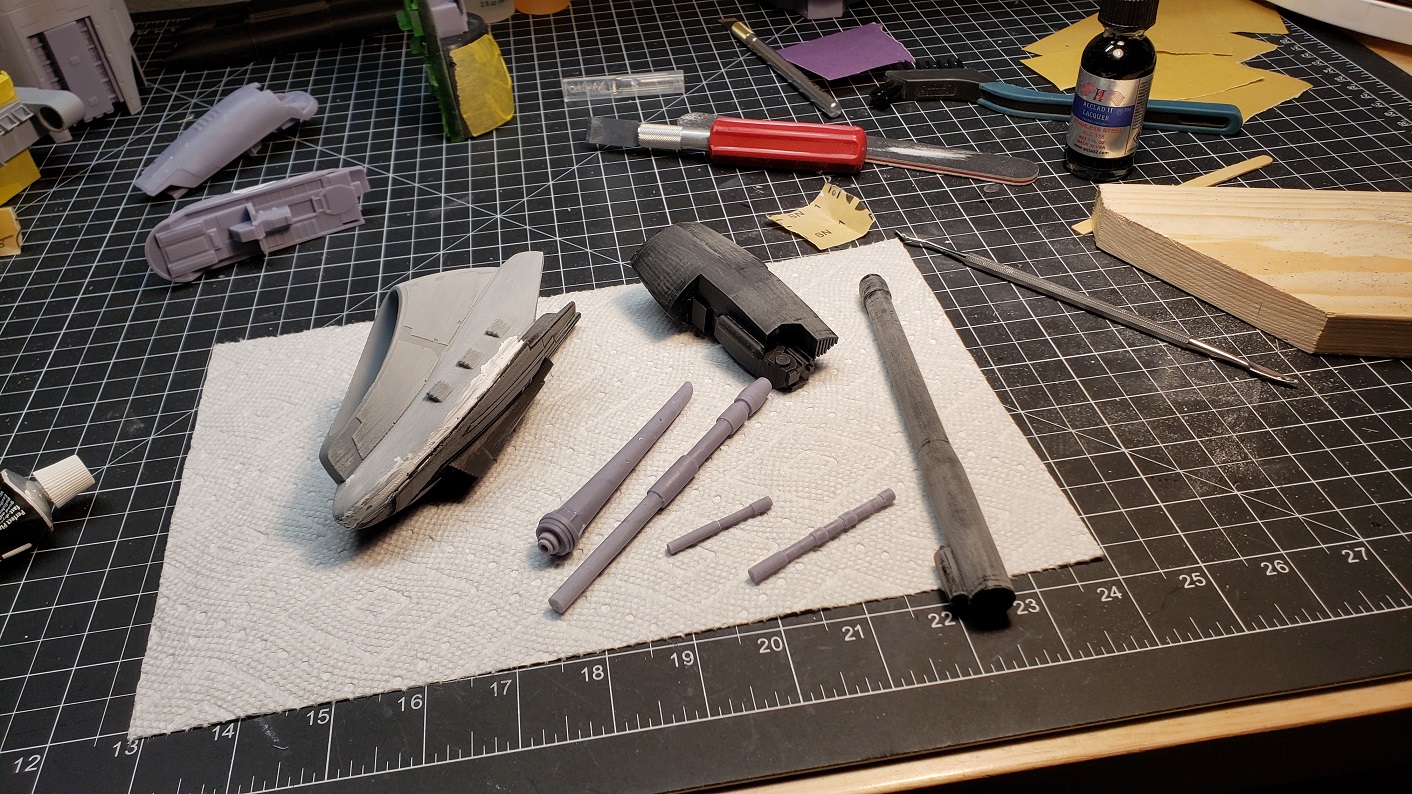 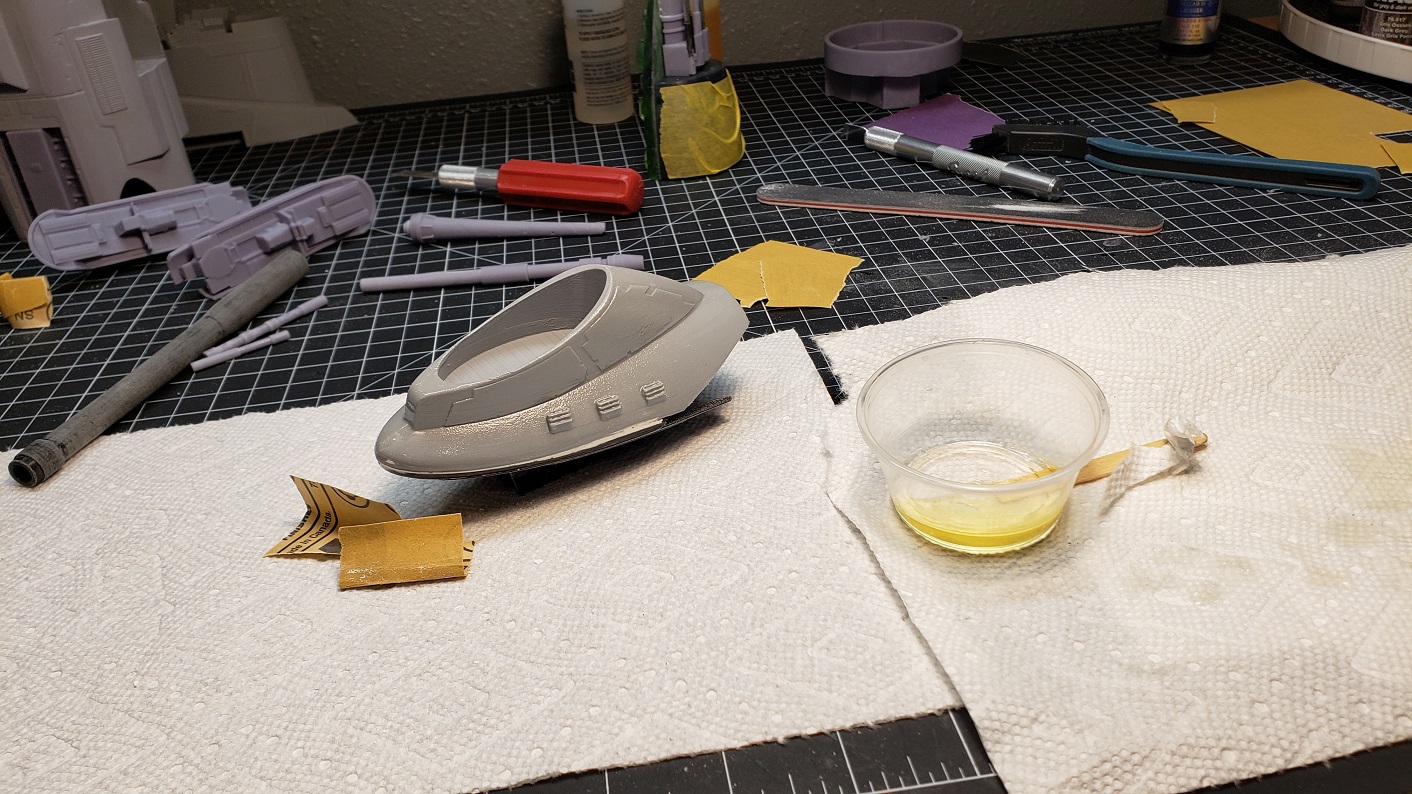 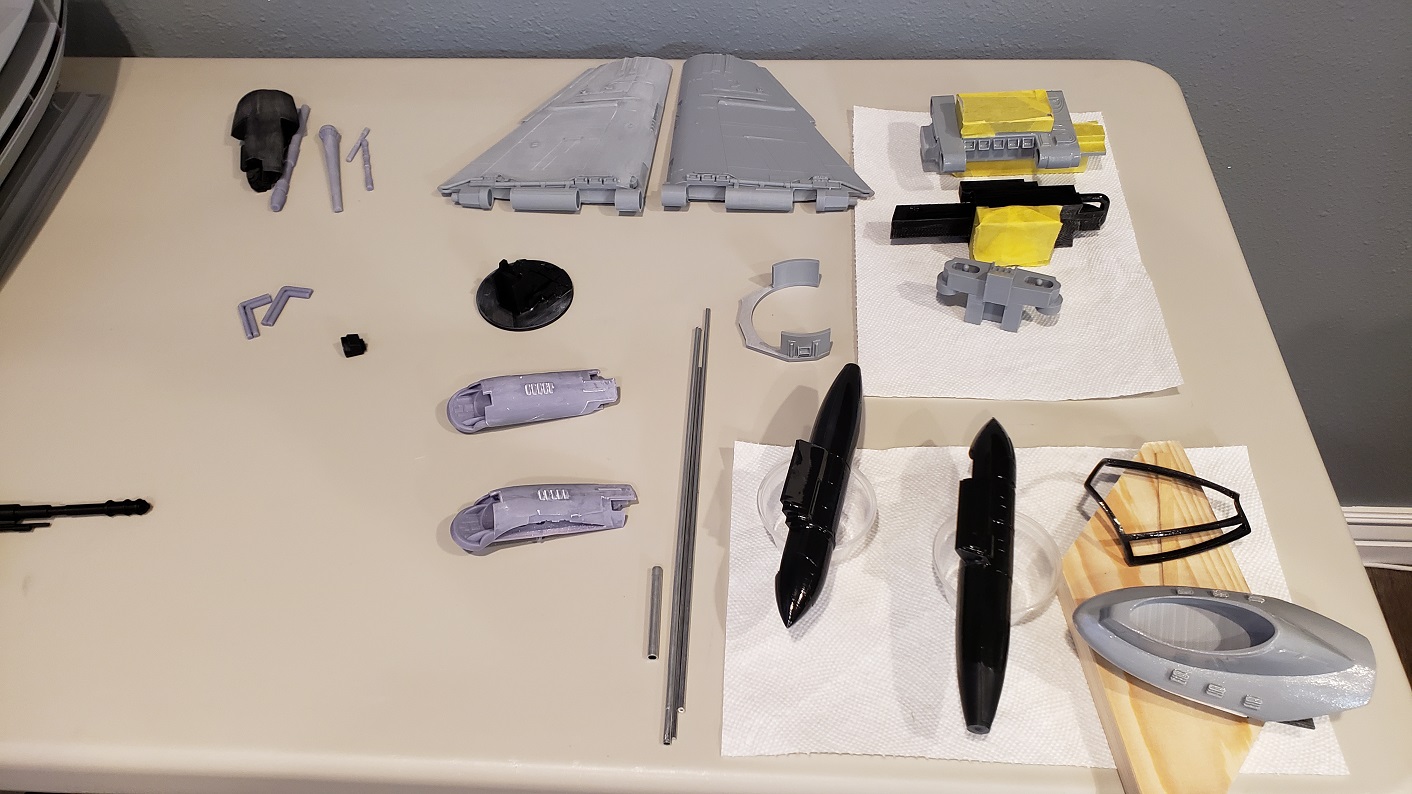 I was able to get the first coat of paint onto the cockpit, AS-20. 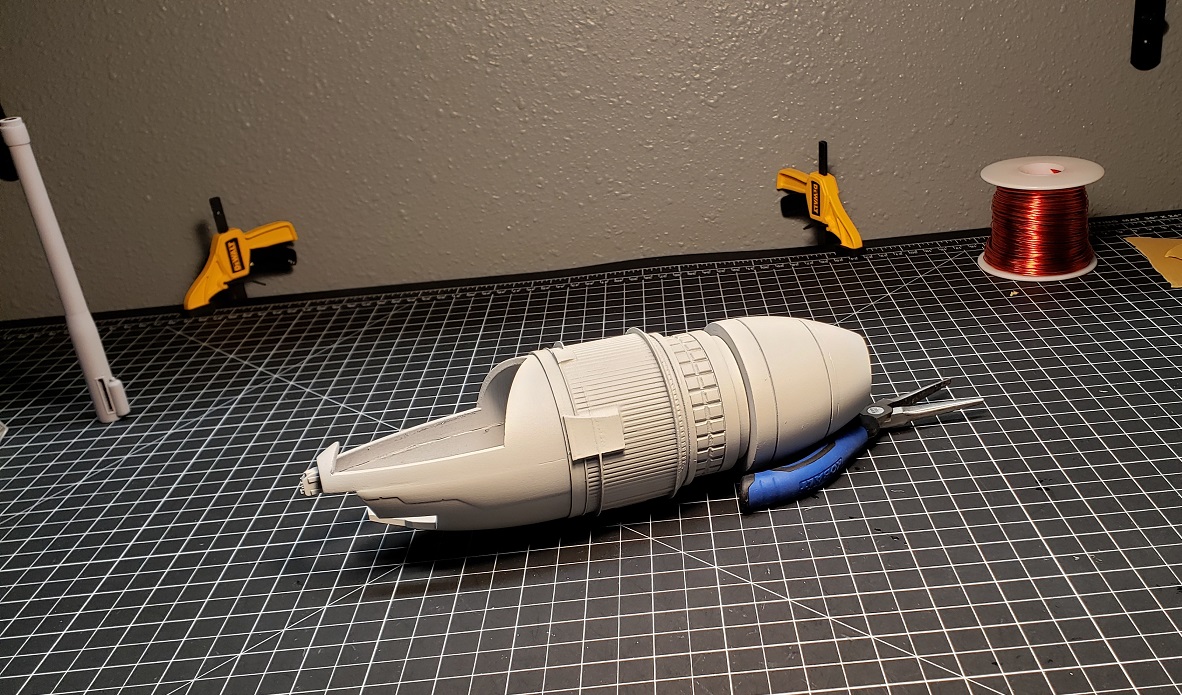 Wow! I am very impressed by your skills with 3d printing and postprocessing.

Bauble said:
Wow! I am very impressed by your skills with 3d printing and postprocessing.
Click to expand...