Just recently started model making. My first model was a total scratch build, and enjoyed the challenge very much. The idea of building a scratch build space vessel without plans, other than what I make myself, intrigues me. To start off, I went to my stock pile of junk to see what would attract my attention for this build. Found some PVC drainage pipe bits. One piece in particular was very attractive . . . 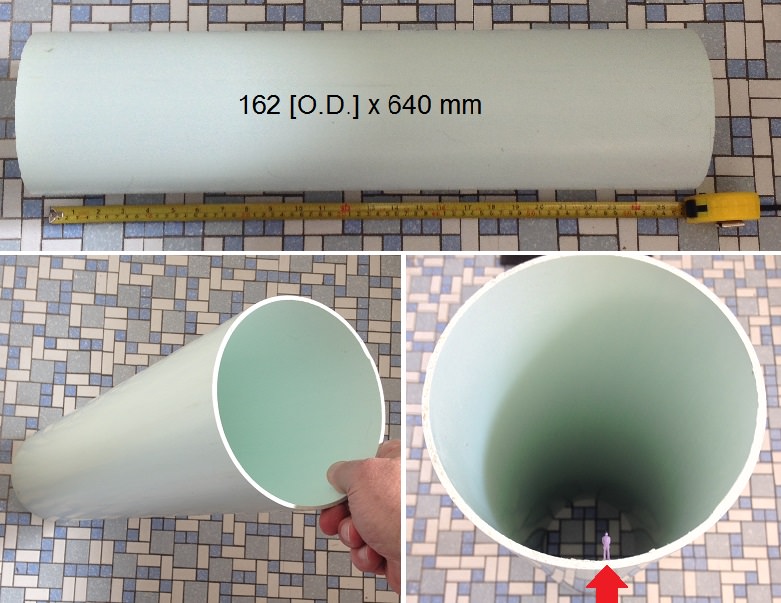 The plastic figurine sets the scale of this project. So as you can see, it looks like it will take a long time to build _ just how I like it.

I am not sure what and how this vessel will look like. I am making it up as I go along _ in ad-lib fashion. That is why it's called an ADLIB-1.
The vessel shell will need to have portions cut away for revealing the vessel's interior. My plan so far: 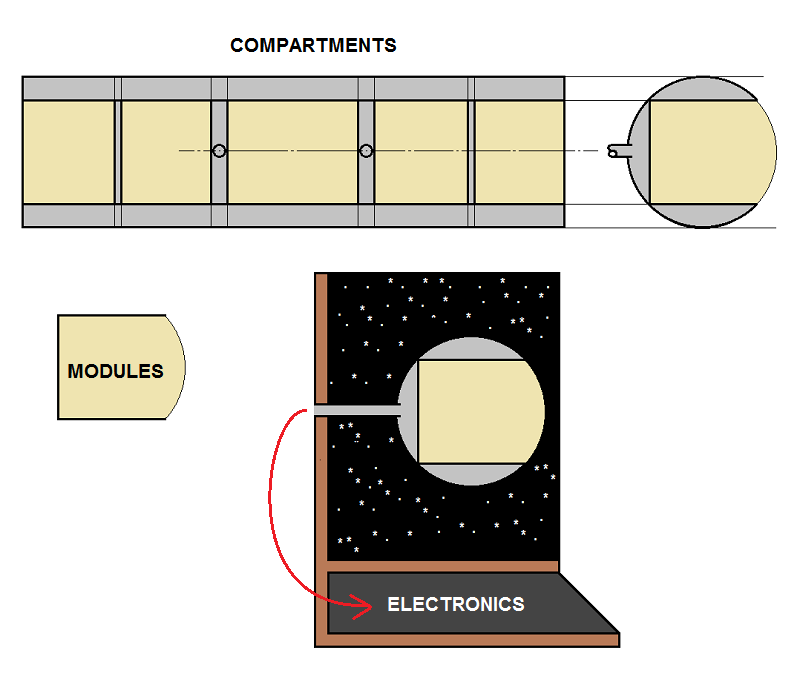 Looked into secondhand scrap bins for bits and pieces. Cannibalized an old computer and an analogue TV for parts. Among that lot, these bits attracted me for a propulsion system; a reflector, computer fan, small transformer, and a large knitting needle. 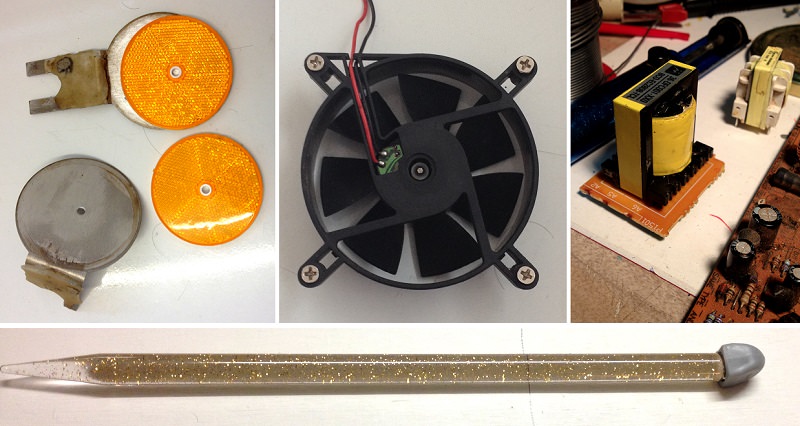 Drew up some plans for these items. 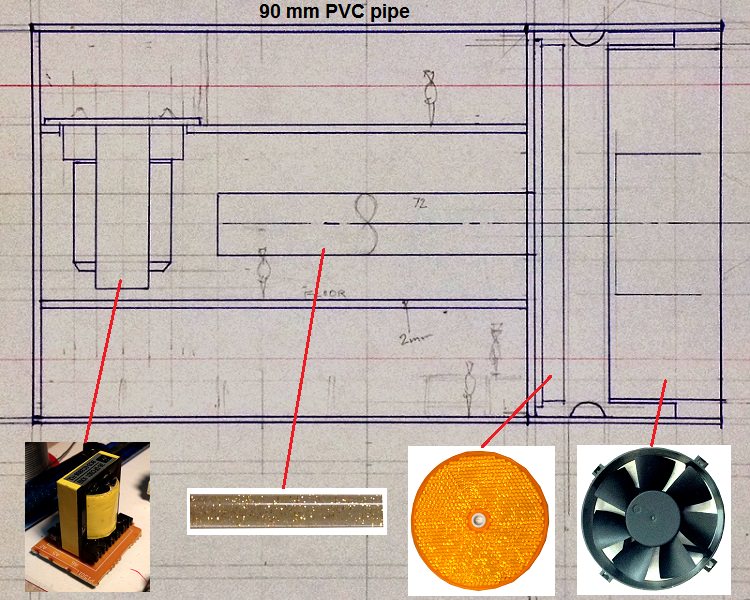 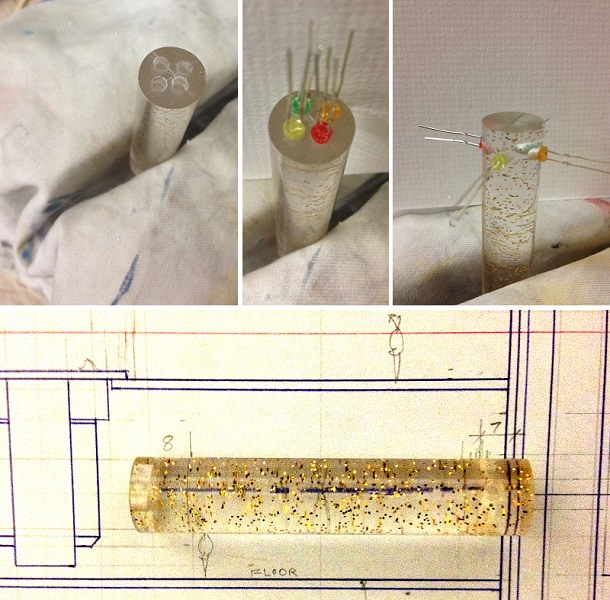 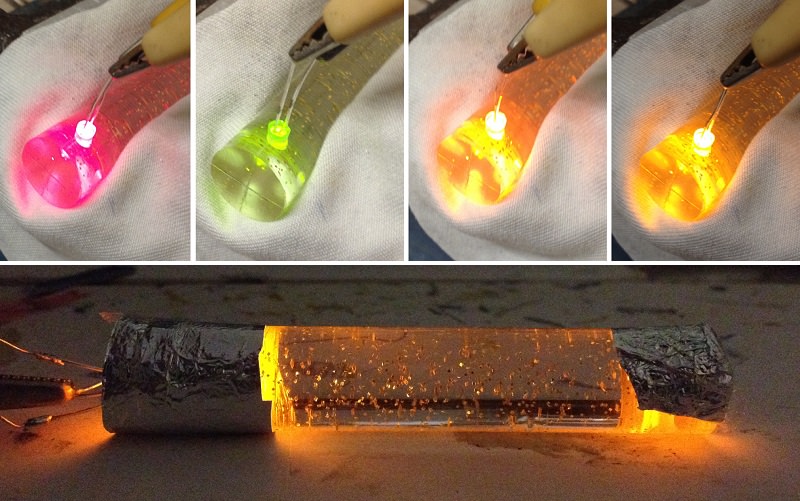 Welcome to the RPF mate . I’ve always been fascinated in sci-fi orientated scratch builds so looking forward to seeing where you end up with this . Subbed ! 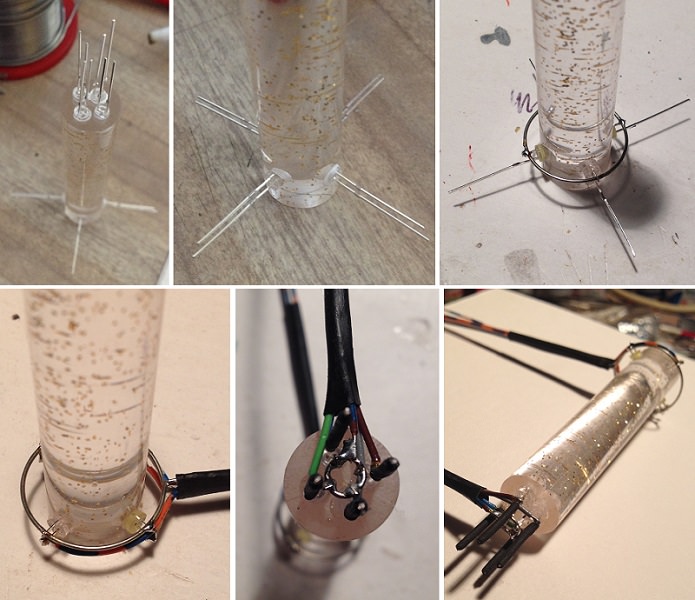 Time to step in and get the main bits out of the way. 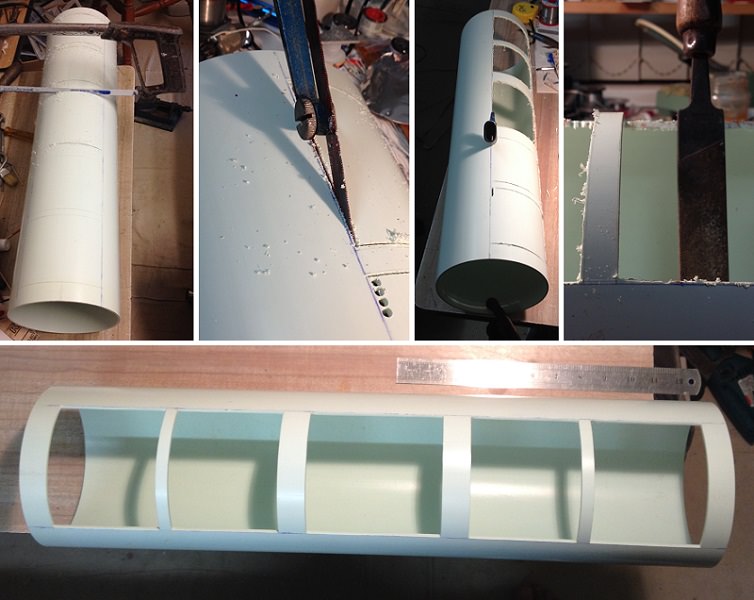 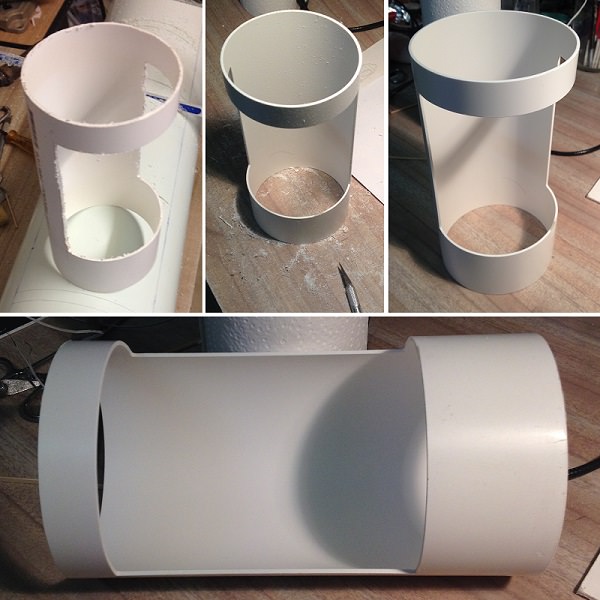 Only took two hours. Most of the time was filing the openings to the marked lines, nice and square.
Last edited by a moderator: Nov 8, 2018 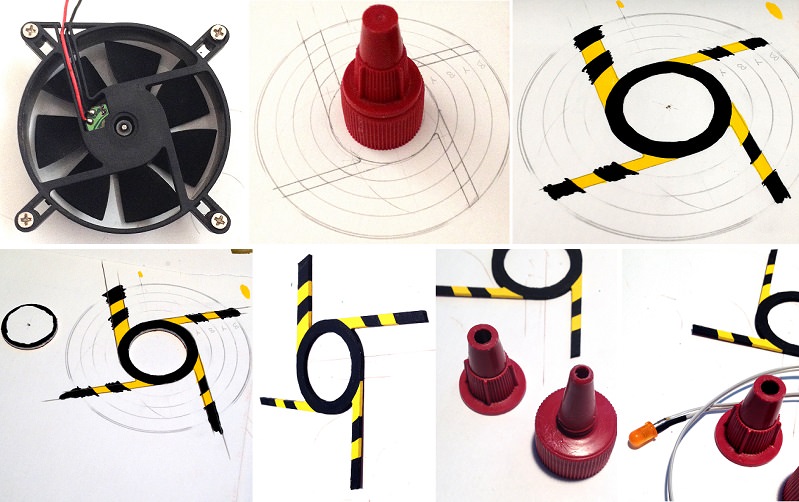 Loosely installing reflector and fan. Used 90 mm PVC End Cap for an outer bracket-housing.
Used a new CA glue that does stick to other plastics, Certain guidelines need to be followed for best results. I bought the Weicon VA 8312 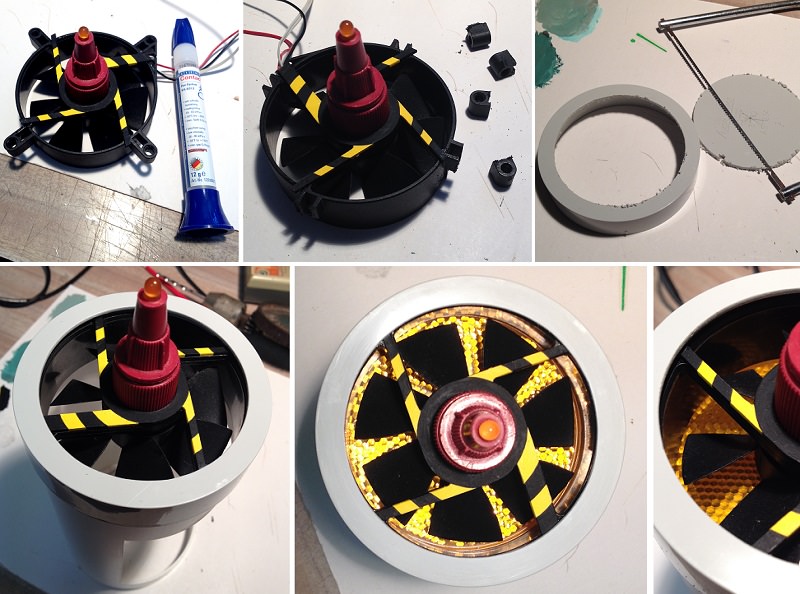 Here, the fan is operating. They run very quietly these days. 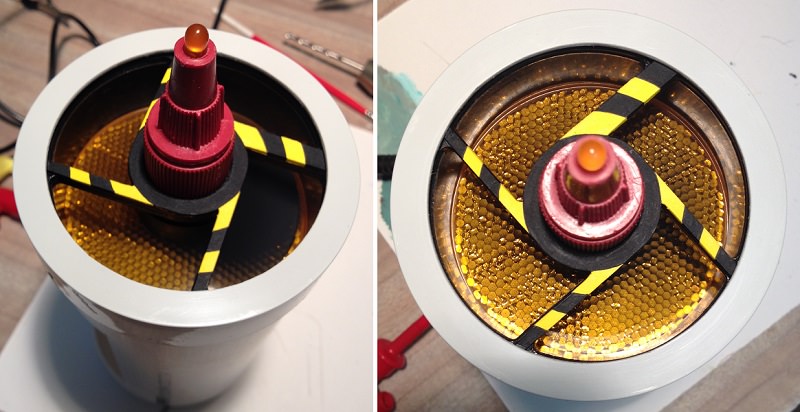 It is not yet completed. It still needs a LED strip to be placed between reflector and fan. Will show on next update. 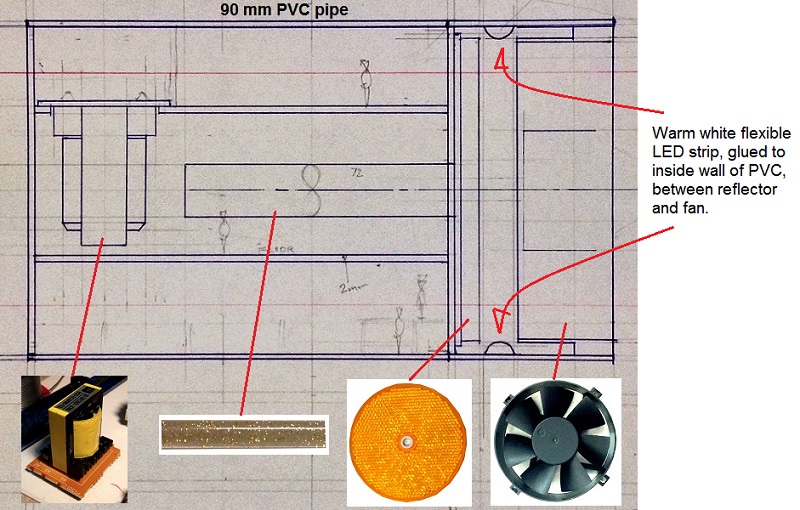 I’m liking this build. I can’t wait to see more.

Loving the ingenuity of it all!

Your LED lighting plan is interesting - the lit-up knitting needle is great!

Thank you gedmac66, and Lamby for the :thumbsup; and SCUDMAN, joberg, and Lamby for your kind words. Much appreciated, Glad you are enjoying something different. But guess what, so am I.
__________

Got the LED strip and had a bit of trouble hooking it up. The flexible PCB tracks is double sided (nothing unusual here), but this brand/design required the power supply leads to be solder to both sides.

Bought the cheaper version of LED strip, i.e., non-waterproof. So it does not have the clear plastic domed covering on the strip (as shown in my drawing). Discovered that the LED strip could actually fit between the PVC wall and the edge of the reflector. What this means is that the LED light rays can actually penetrate into the reflector lens, as opposed to only onto the surface as previously thought. 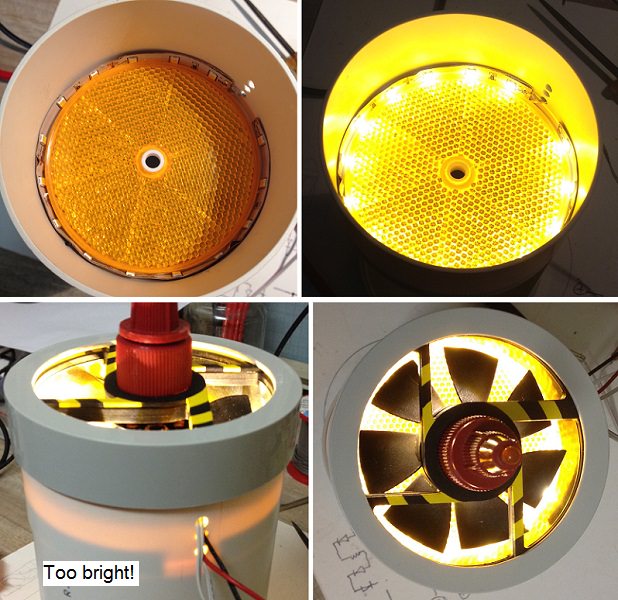 It turned out too bright. After all, there are 15 LEDs involved here. So I added a 100 ohm 2 watt resistor on the positive wire. This dimmed it down nicely. The last two photos show the fan in operation. They make them absolutely quiet these days. 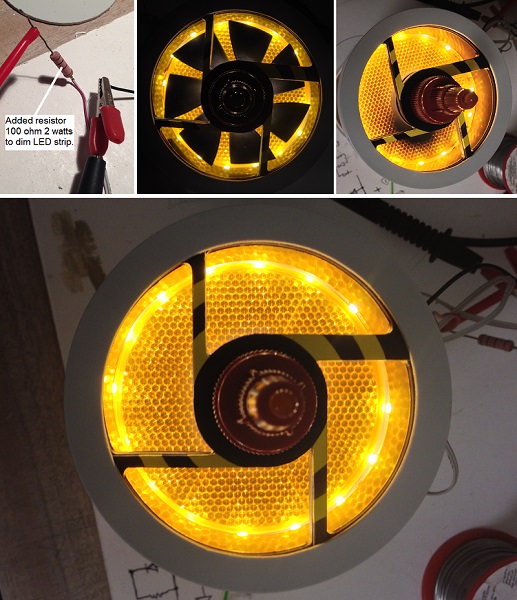 I was surprised to see the light penetrate through the bulkhead. It looks good and powerful. It will add more meaning to the purpose of the lit rod. The top two photos show the dimmed LEDs version (day and night). The bottom photo shows how bright it gets in the Propulsion Room if I left the LEDs at full brightness. 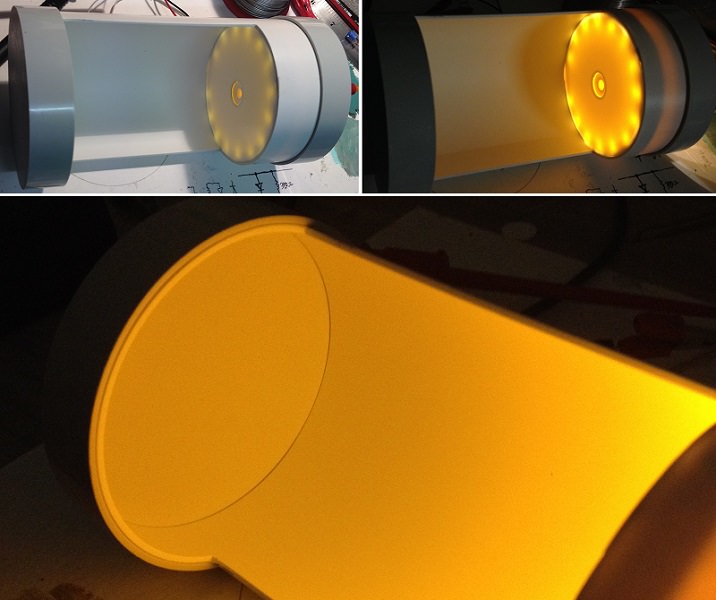 Nice! - and now you're going to have to post a video of that fan/light combo running!!!

Lamby said:
Nice! - and now you're going to have to post a video of that fan/light combo running!!!
Click to expand...

:lol. Yeah, I might have to when the model is completed. But in reality, a video of the fan-light combo will not look any different than the photographs. 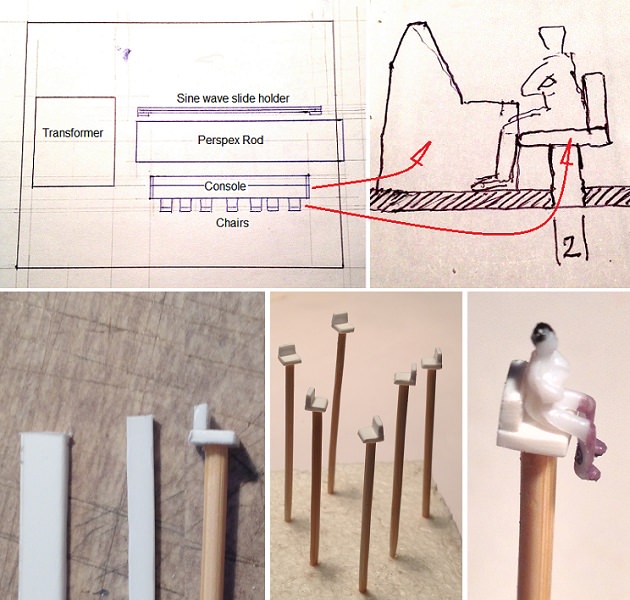 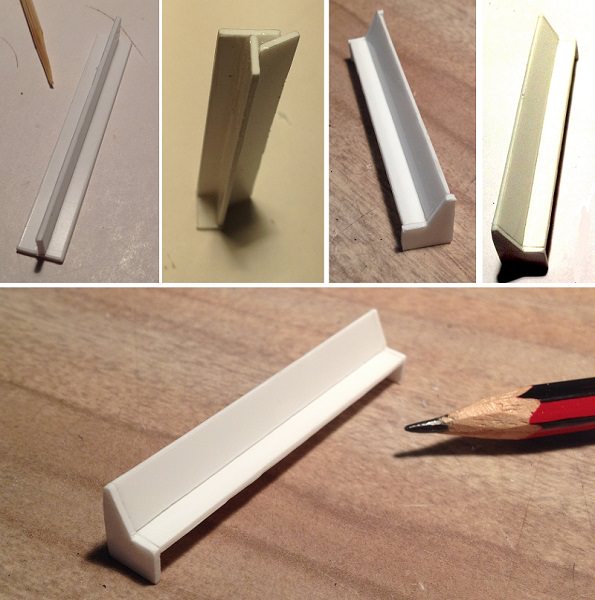 Cool update of extremely ( to my eyes ) minuscule features . Can’t wait to see how you tackle the screens !
Just out of curiosity Peter ( that o.k.? ) , what scale is this craft supposed to be ? , I don’t recall you mentioning one specifically .

gedmac66 said:
Cool update of extremely ( to my eyes ) minuscule features . Can’t wait to see how you tackle the screens !
Just out of curiosity Peter ( that o.k.? ) , what scale is this craft supposed to be ? , I don’t recall you mentioning one specifically .

edit - oops just remembered the title of your thread !:angel
Click to expand...

No problems Ged. Thank you for visiting my build.

Included instrumentation to the console. 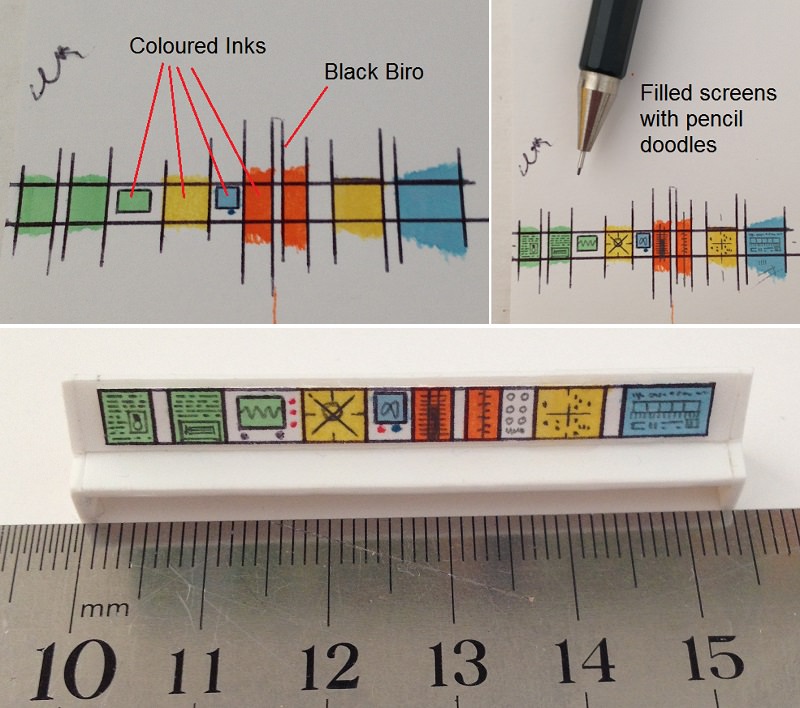 Oww !? ... just imagining how you achieved that is making my eyes hurt ! :eek Please tell me you used magnifying glasses or something similar !
You’ve also got to have steady ‘ surgeon ‘ type hands to execute that type of detail work mate , can’t wait to see how you finish the console off

gedmac66 said:
Oww !? ... just imagining how you achieved that is making my eyes hurt ! :eek Please tell me you used magnifying glasses or something similar !
You’ve also got to have steady ‘ surgeon ‘ type hands to execute that type of detail work mate , can’t wait to see how you finish the console off
:cheersGed
Click to expand...

:lol Thanks for complement.

I think adding keyboards, etc will be too fine for me.
Besides, setting such a standard throughout the ship will quadruple the work load for myself.:facepalm

I love how you made that console. This build just keeps getting more and more fascinating! Can't wait to see it finished